A tour of the Hungarian National Opera House was in order—one of Europe’s finest.  Emperor Franz Josef provided half the funds, but demanded that it be smaller than the opera house in his beloved Vienna.  The legend is that Franz Josef attended an opera here and left at intermission, incensed at this beautiful opera house so far away from Vienna. 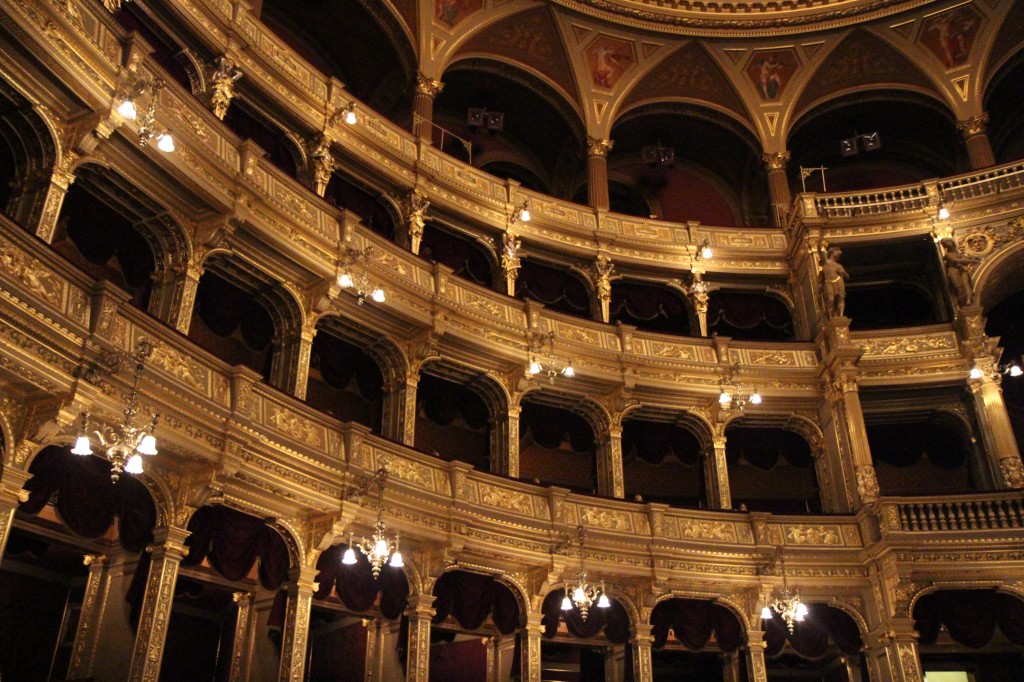 A special staircase was reserved only for the use of the Emperor and the Empress.  We did not use it either.  Their special box seating is still reserved for the president, the mayor and other dignitaries. 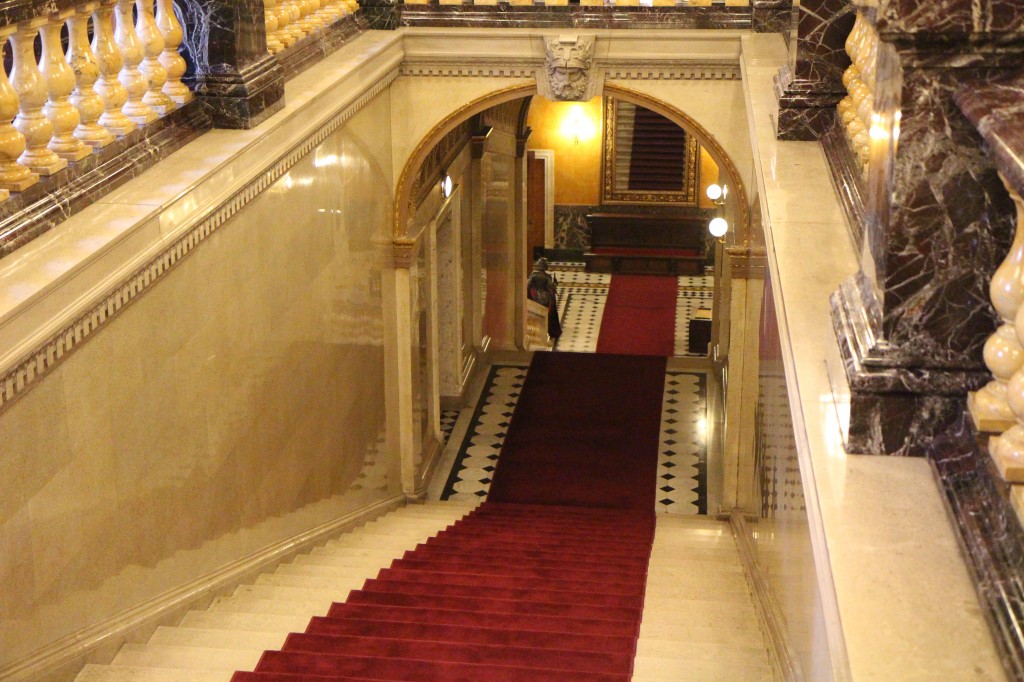 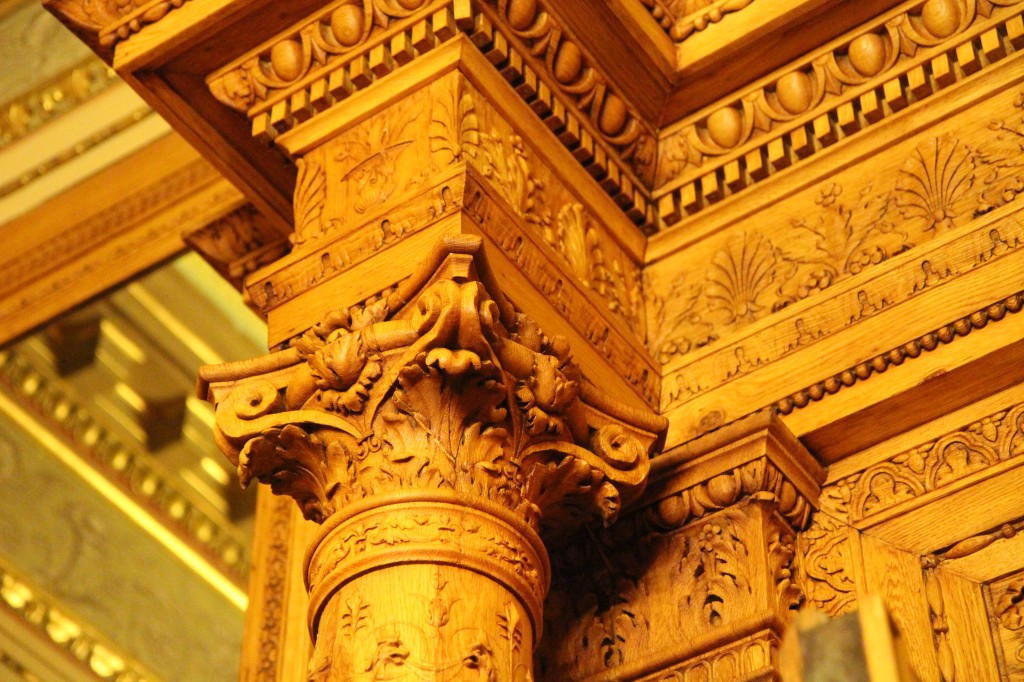 The smoking section in the back is where the secret lovers would go during the breaks to snog (that’s Harry Potter speak, or maybe just British).   Writing this, I google “snog” to see if it’s actually a British word too.  As soon as you begin to type it in, Google fills in the rest of the suggested question, “is snog a british word”.  Apparently, I am not the only person who’s wondered about this critical bit of Western Civilization. 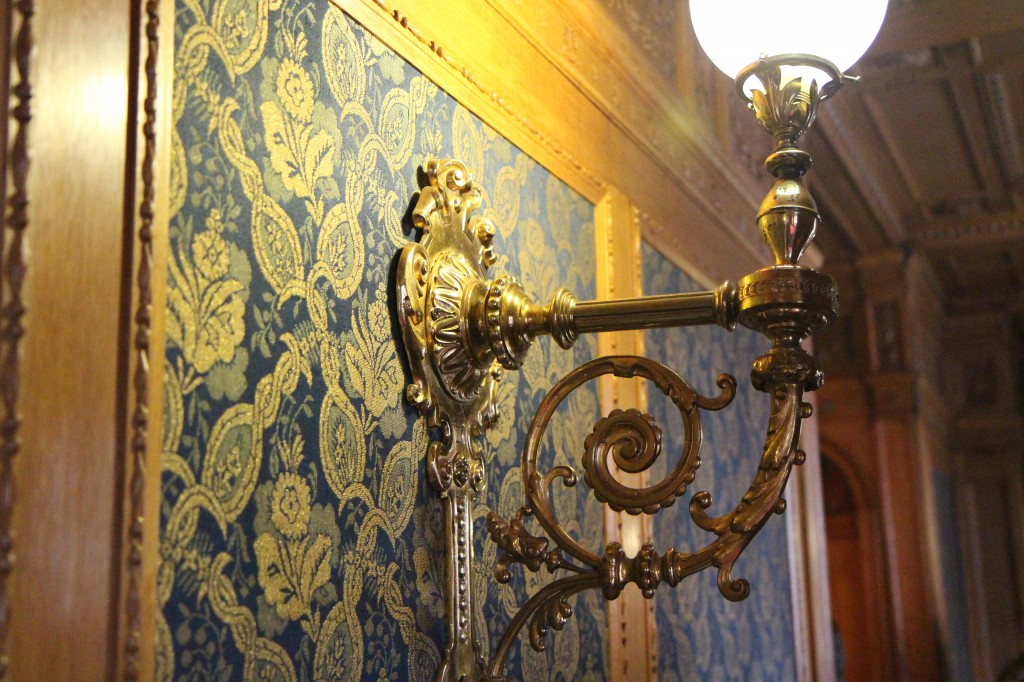 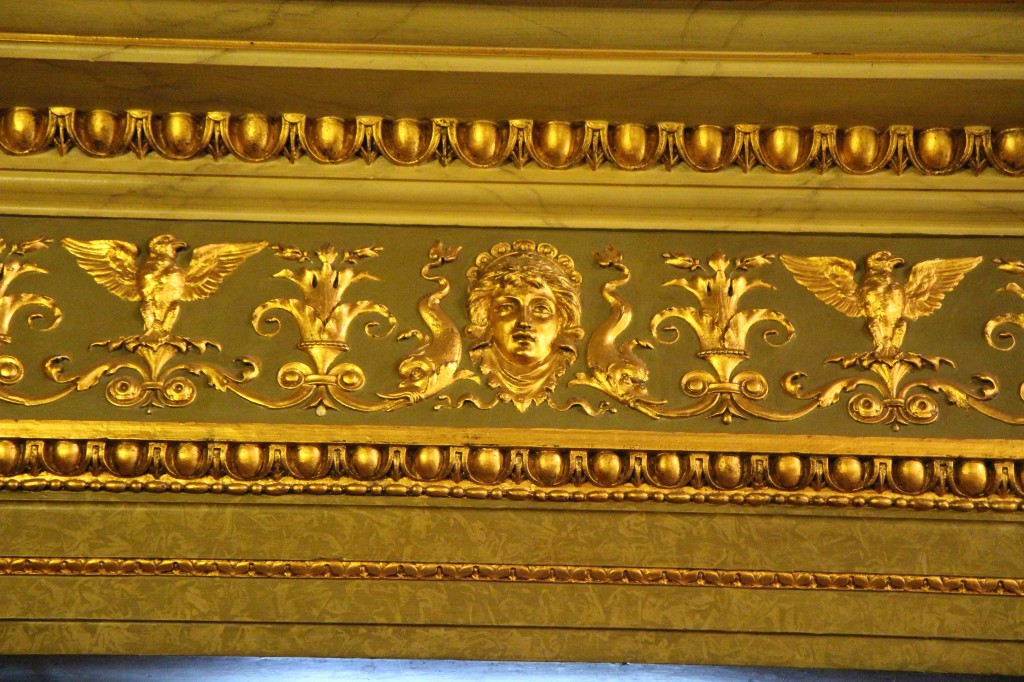 We climb step by step up to Castle Hill on the Buda side of the river.  Several versions of the palace atop this hill were destroyed and rebuilt through the centuries.  As WWII drew to a close, the approaching Soviets laid siege to Castle Hill for 100 days.  The hill, and the city, were devastated. 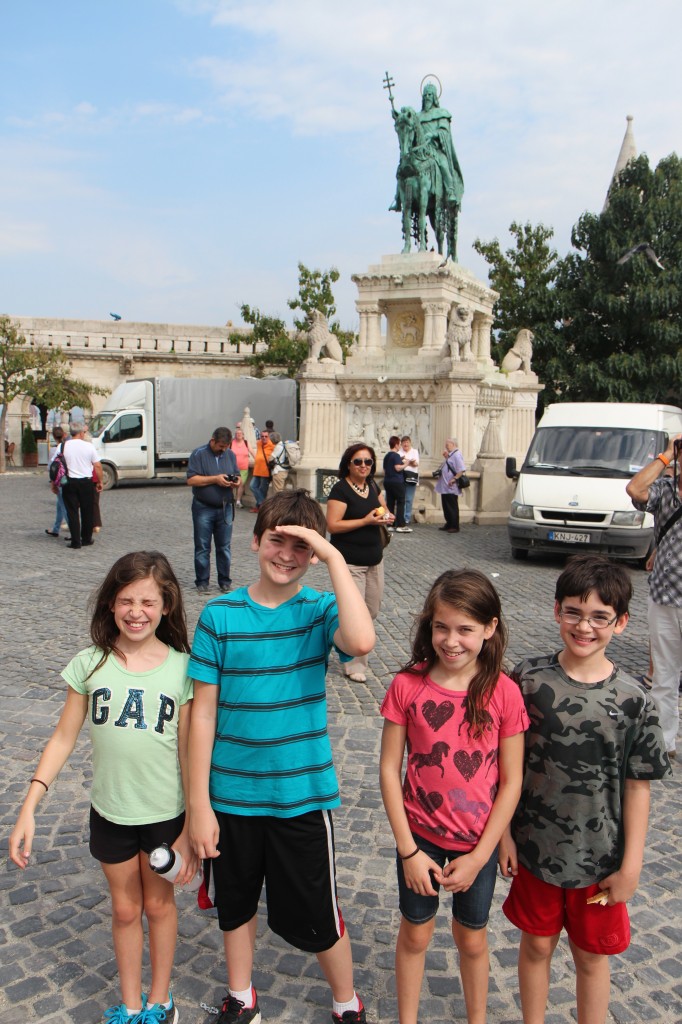 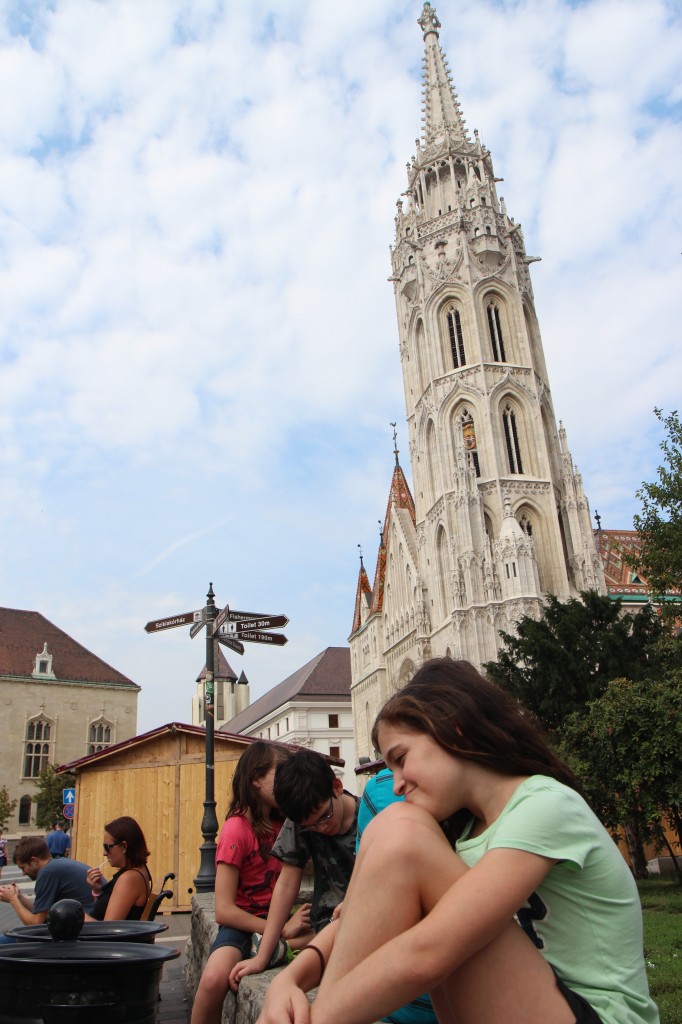 [waiting for the bus]

Wonderful views of the Danube and of the Pest side are free from here so you can save your Hungarian forints for goulash.  Many of the buildings we see were erected for the 1896 millennial year for Budapest.  1000 years of Magyar success. 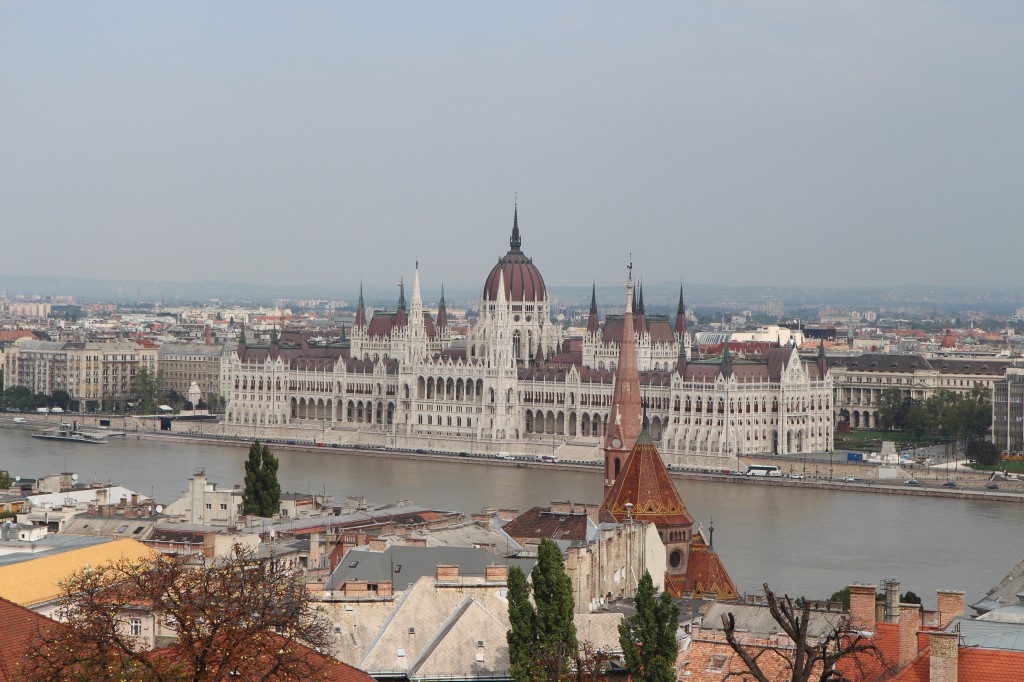 It is amazing how much time we spend planning out our current—and next—travel itinerary.  It is all so worth it to see the kids’ eyes light up and to wonder what is getting into those developing minds of theirs.

While Lisa braves a local hair place we explore Margaret Island in the middle of the Danube.  This long, tear-shaped island is an urban playground for Budapesterians.

We rent a silly bike cart that seats five. You steer it like a car.  The brake is a handle on the steering column, like a shifter in an old automatic transmission.  We take turns terrorizing—ahem, driving—and try not to hit any walkers, joggers or cyclists.  At times, I take over the steering as we near the concrete bank of the Danube.  I can just imagine the stories that will be told to mama if we end up careening down a bank and into the river.  One time Lisa left me alone with the kiddos and while I was reading them a story Will stood up on the couch arm rest.  Before I could get a hold of him, he lost his balance and toppled backward full-force into our bookshelf. He erupted into wailing and I could see the blood starting at the wound at the back of his head.  I did manage to get him off the carpet before the bleeding really started…  We were in the ER for that one with stitches but I think Lisa trusts me now with the peeps. Pretty sure.

[When I am thinking clearly, I ask Lisa to proofread these posts before I post them.  As she reads this previous part she mentions, “then there was that time I was gone and Ana fell and hit her head on the windowsill and threw up.”  I kid you not.  So I suppose I take back the part about thinking she trusts me now with the peeps.  But it’s all good, she is a protective mama bear after all.]

It is a sunny day and the high-schoolers (or are they college students?) are out in a park doing team-building exercises. 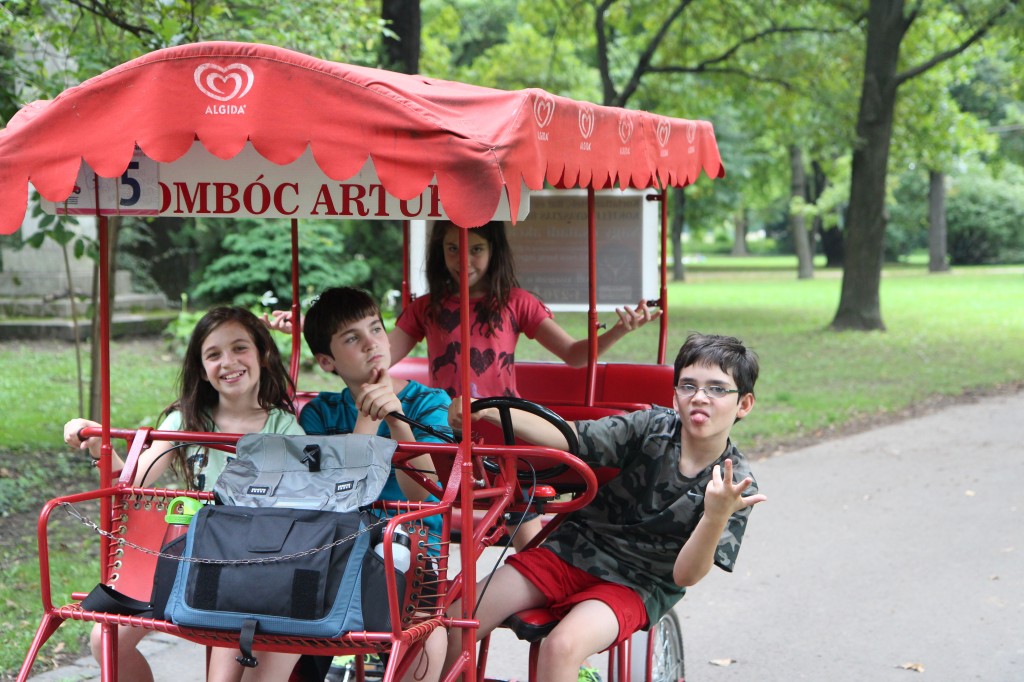 We drive around the island, weaving through people crowded around ice cream counters.  The kids spot a playground and there’s consensus, “we’ve GOTTA go play on that Daddy!”   When we return the cart, the young man checking out the carts takes our payment.  He mistakenly gives me less change but we get it all cleared up.  It makes you wonder sometimes when you don’t speak the language and stick out as an obvious tourist.  Honest mistake or wily, bored young man?  You’ll never know but it doesn’t hurt to estimate exactly what change you expect.  Trust, but verify as Reagan used to say—then, smile. 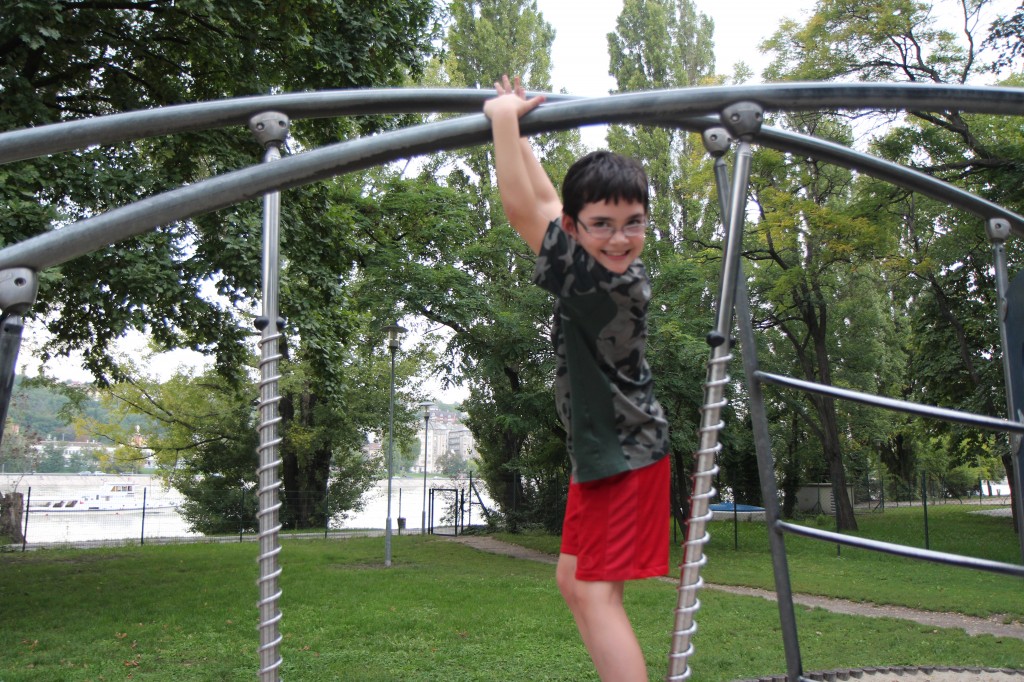 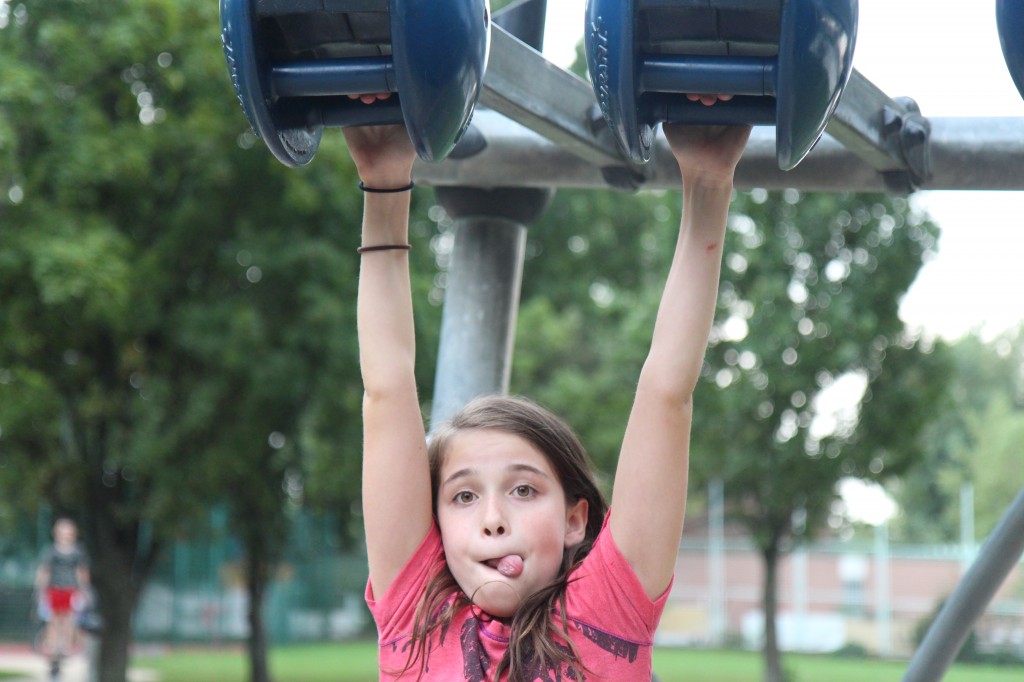 Now I realize the smile is more for myself.  When folks crowd in and cut you off in traffic or whatnot, I can start to get all Jersey Turnpike.  You know what I mean, rarely is the best of human behavior showcased in traffic.  Hey, that was my 18 inches of buffer space in front of my car!  I am far better off when I remember to just give them the benefit of the doubt.  Dare I even say, to try and remember to love my neighbor.  I would love to aim for this righteous goal in traffic (or in crowded airports or train stations) but othertimes I am just trying to remember that when I start getting petty and small I just get myself riled up for no purpose.  I tell myself that life is too short for that nonsense but then that German on the autobahn is suddenly right on my back bumper and gesticulating wildly.  When he pulls up beside me to pass he emphatically gives me the two fingers pointing into his own eyes—the international sign for pay attention.

I am familiar with some other internationally recognized signs used in traffic but I am grateful I somehow manage not to demonstrate them.

5 thoughts on “Ah, we will miss you Budapest”