One thing we treasure

It is hard to imagine the different trajectories nations have traveled.  Travel is wonderful to force you to be confronted by histories beside your own nation’s familiar story.  I am continuing my own education in a visceral fashion. The kids are absorbing more than we can see in the moment and repeat things back to us weeks later that show how much they understood.

Ana did a great job writing about the Hospital in the Rock.  I did want to add one note and someone please correct me if I get it wrong.  Our Hospital in the Rock tour guide told us that at the end of the siege of Budapest in 1944 Hungarian civilians attempted to flee the approaching Soviet army.  They’d already endured the occupation by the Nazis.   As the Soviets took over, 24,000 civilians made a run for it out of the damaged city.  The Soviets killed all but 700.  The mind reels in the face of a fact like this.  A quick web search reveals that this is likely just one example of the destruction that went on.

In Liberty Square stands the monument of the Soviet “liberation” of Hungary.  The communists “ordered” the statue, the Hungarians had to pay.  The Hungarians tolerate it, according to what we read.  Two female Hungarian guards—they look to be Army—now stroll around the square unconcernedly chatting. 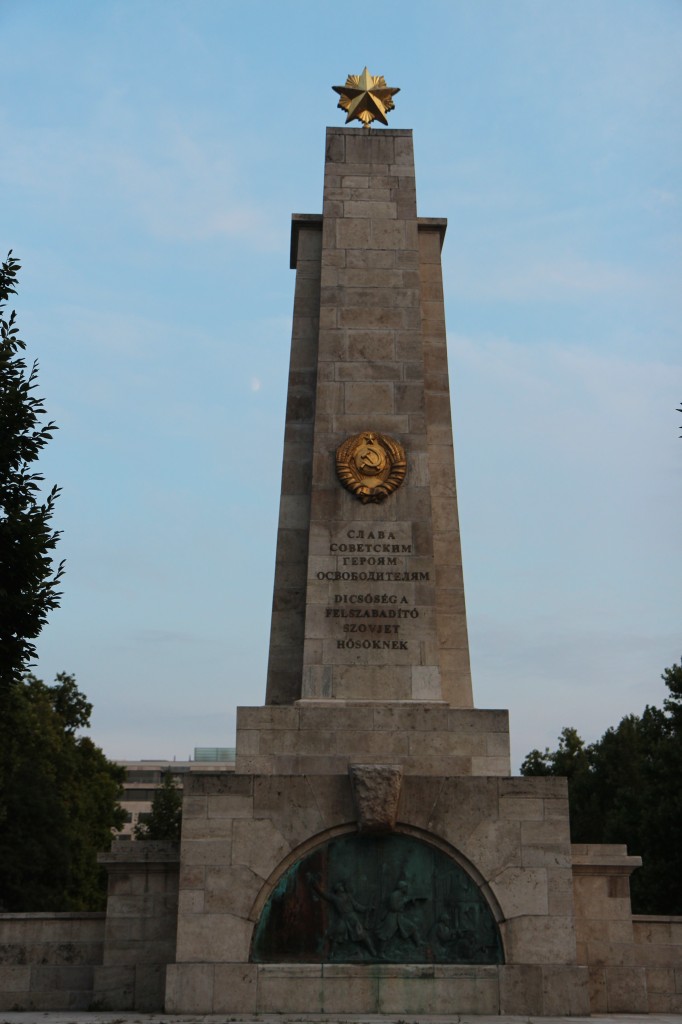 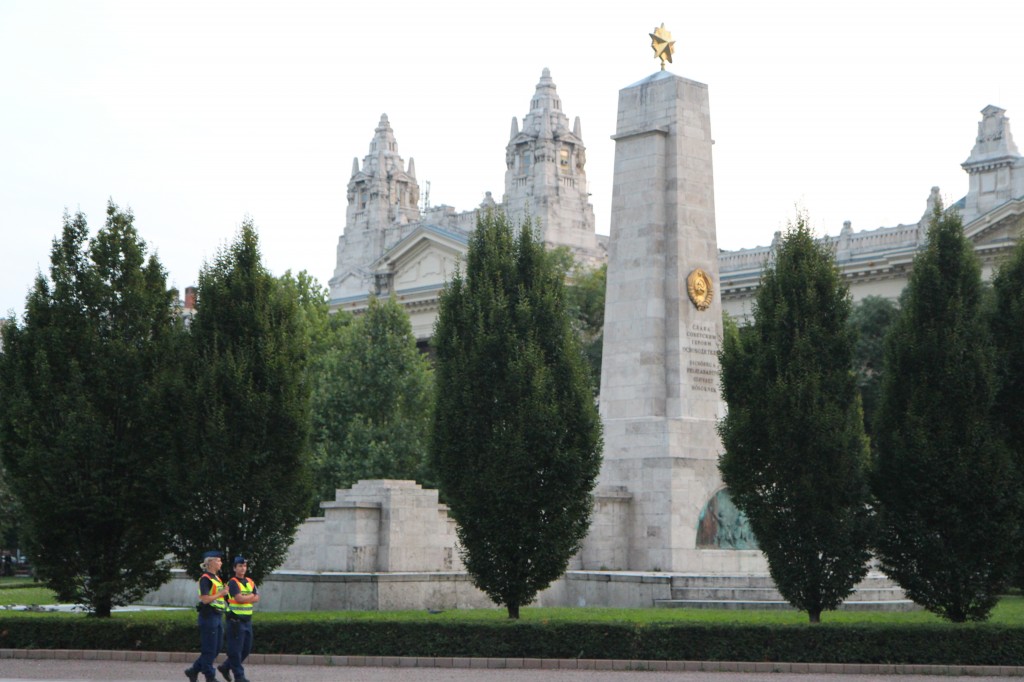 Towering over the monument is the Hungarian State Television headquarters—the Soviet puppet and propaganda studio that gave rise to the popularity of Radio Free Europe.

The Radio Free Europe building is not far from here.  Originally built by the Soviets for their purposes, this building was rented out to Radio Free Europe for $1 a year after the 1989 revolution throwing off the yoke of the communists.  What a great way to thumb your nose at the former captors by giving a prominent place to the voice of freedom that encouraged many through dark years.  The Radio Free Europe headquarters have now moved to a more secure location due to threats from radical jihadist groups.

The irony and the embrace of freedom in Liberty Square makes an American take notice when you suddenly walk into a jaunty statue of Ronald Reagan.

Here is the former leader of the free world with a smile on his face striding purposefully from Parliament into the beautiful square.  Hundreds of Hungarians gathered at Liberty Square at the 2011 unveiling of the statue of Reagan to celebrate the man they credit with ending communist rule in their country.  The US Secretary of State Hillary Clinton ended up helping dedicate the statue of the famous Republican.

Can you imagine what it must have been like to be kept behind the Iron Curtain and hear an American president, in divided Berlin, say “Mr Gorbachev, tear down this wall!”  In the States, some of the most freedom-loving people I’ve met are from Eastern Europe.  It’s great to see his statue here, and not far from the US Embassy (also on the square).  I remember—while new to the uniform—watching on TV as Germans tore down that wall and East Germans drove through the gaps to reunite their families and seek a brighter future. 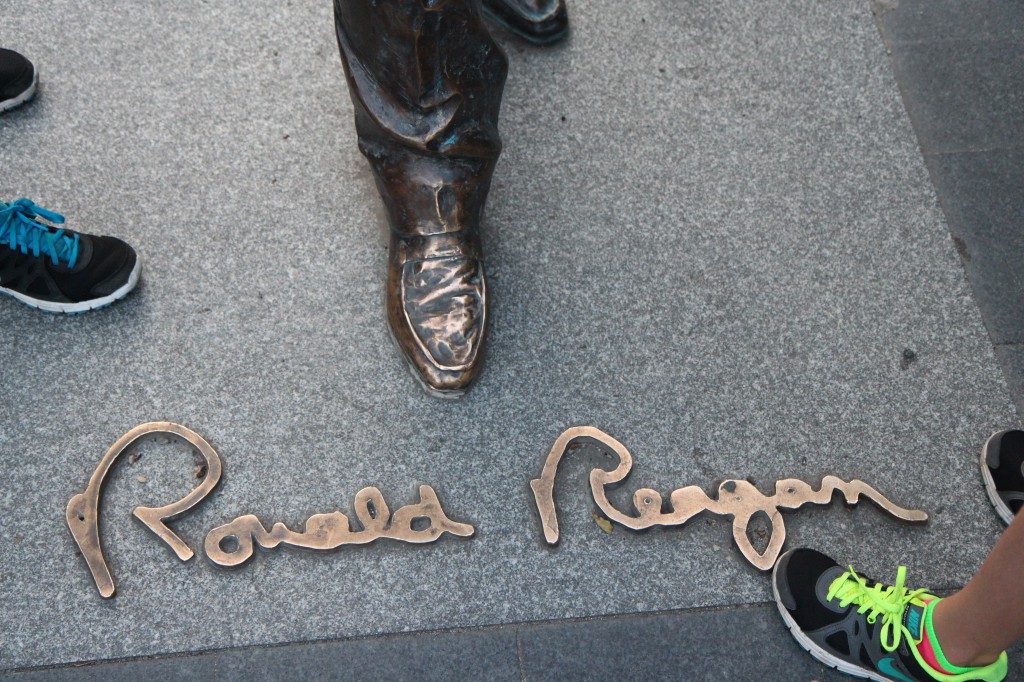 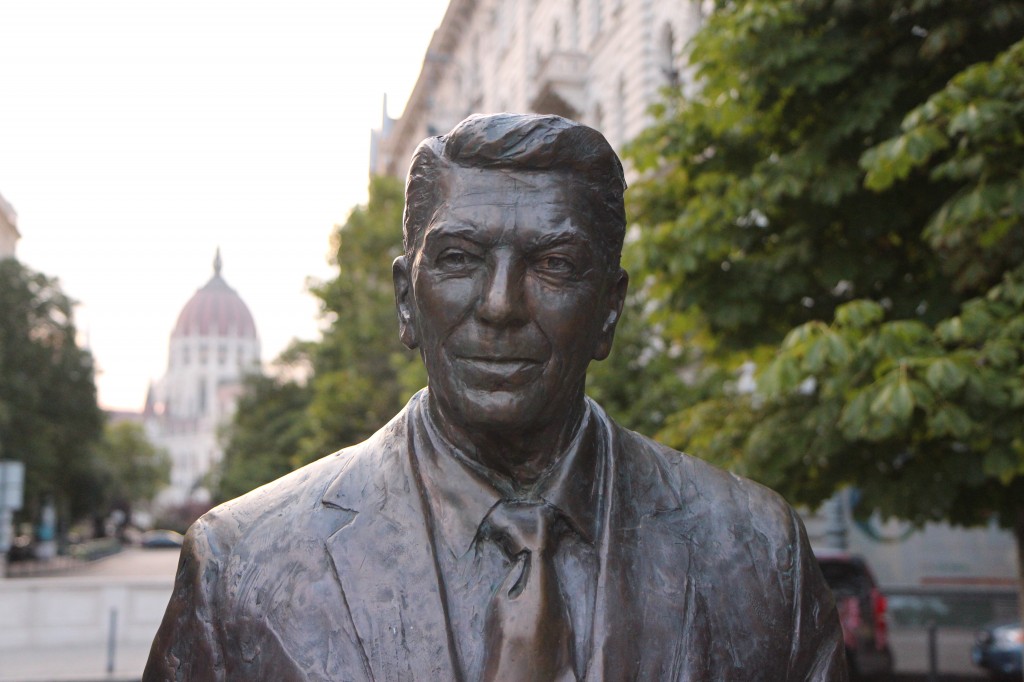 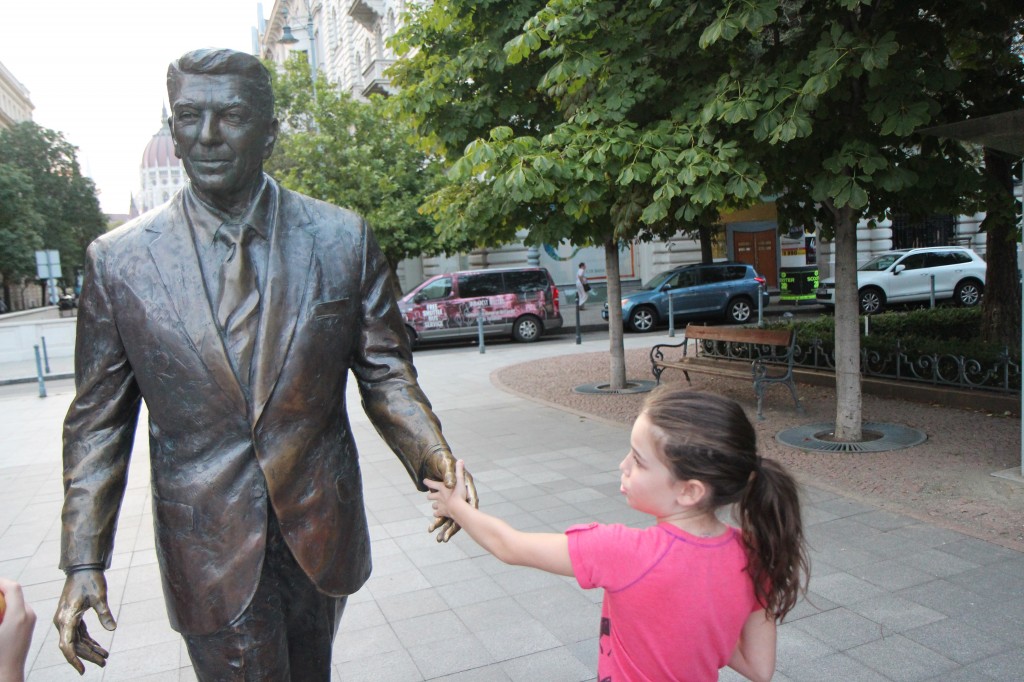 The Nazis inspired another terror group in 1944-1945—the fascist Arrow Cross militiamen of Hungary.  They rounded up Jews, Roma and enemies of the state and murdered them.  The Shoes on the Danube memorial remembers the groups of people who were told to line up on the Danube and remove their shoes then shot and dumped into the river.  The monument consists of 50 pairs of bronze shoes eerily “left” on the raised walkway beside the swift river.  Many Jews were sent to the concentration camps but the Arrow Cross massacred several right here. 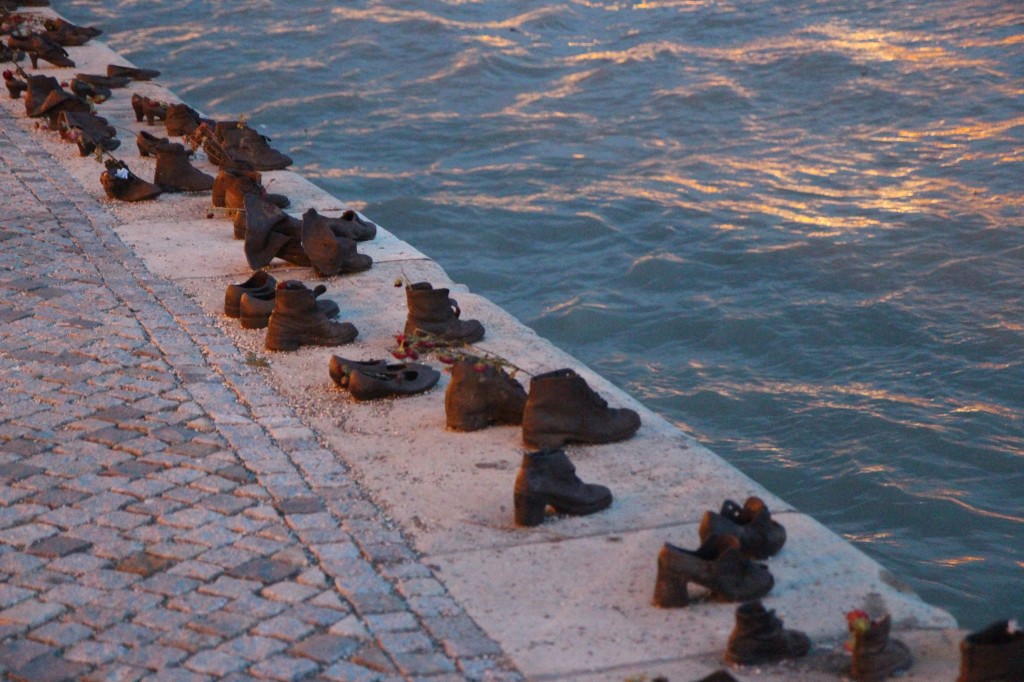 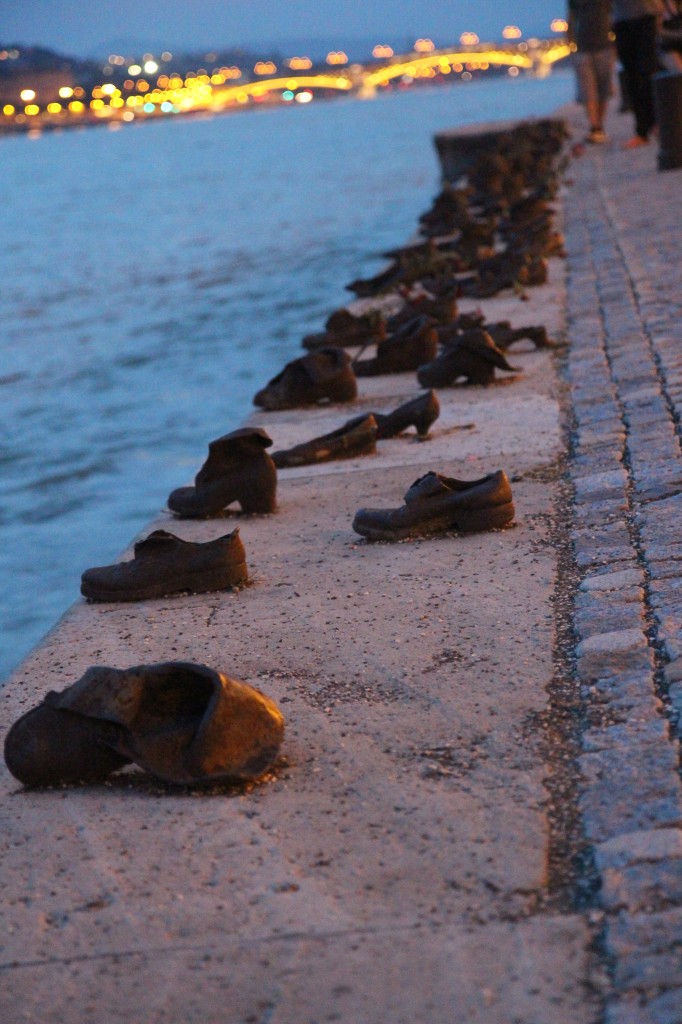 In 1956, after years of Soviet occupation, the people of Hungary revolted.  It was the first major threat to Soviet control of Eastern Europe after WWII.  The 1956 Uprising drafted the reluctant Imre Nagy (“EEM-ray nodge”) as the head of the movement. 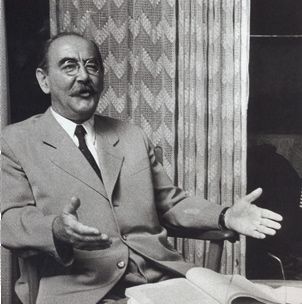 As an influential Communist, he sought to mollify the severity of the Soviet response.  He attempted to bridge the path of totalitarianism of the Iron Curtain with the freedom of the West.  The uprising began with student  demonstrations and spread rapidly across the country.  The Hungarian government collapsed and militias sprang up. People cut the communist symbol from the Hungarian flag and hung it everywhere as a rallying cry.  Imre Nagy sought a parliamentary democracy for his country and announced the neutrality of his country, canceling his nation’s membership in the Warsaw Pact two weeks after the protest began.  The Soviet Politburo initially announced a willingness to negotiate the withdrawal of occupying Soviet troops.  But three days after Nagy’s announcement, the Soviets invaded with a large force of troops and tanks.  They violently put down the uprising, killing 2,500 Hungarians in the process.  Medical staff in the Hospital in the Rock cared for the wounded. Over 250,000 Hungarians fled as refugees.  One of our dear friends’ father escaped the country during those turbulent days.  The hoped-for response from the West did not come.  Nagy fled to the Yugoslavian embassy and asked for asylum.  The Soviets surrounded the embassy for three weeks.  Nagy’s Hungarian successor promised him immunity and Nagy left the safety of the embassy only to be seized by the KGB.  Nagy was deported to Romania, given a sham trial and executed.  His captors recorded the trial and his comments.  Nagy said, ”my only consolation is that the Hungarian people and the international working class be acquitted of those serious allegations.”  He refused to ask for mercy.  The Soviets buried Nagy and other enemies of the state handcuffed and face down.  The occupying Soviets did not allow his memory or the uprising itself to be celebrated.

Then came the revolution of 1989.  Grateful Hungarians remembered Nagy.  He was exhumed and given a prominent grave in Heroes Square in Budapest.  In his monument near Liberty Square, he stands on a bridge with a careful eye trained on Parliament, as if watching those who make decisions for others. 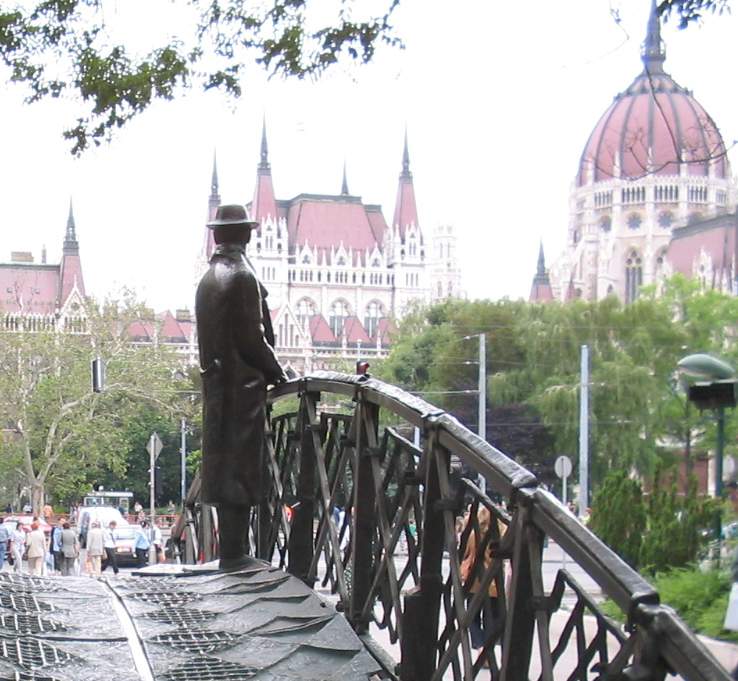 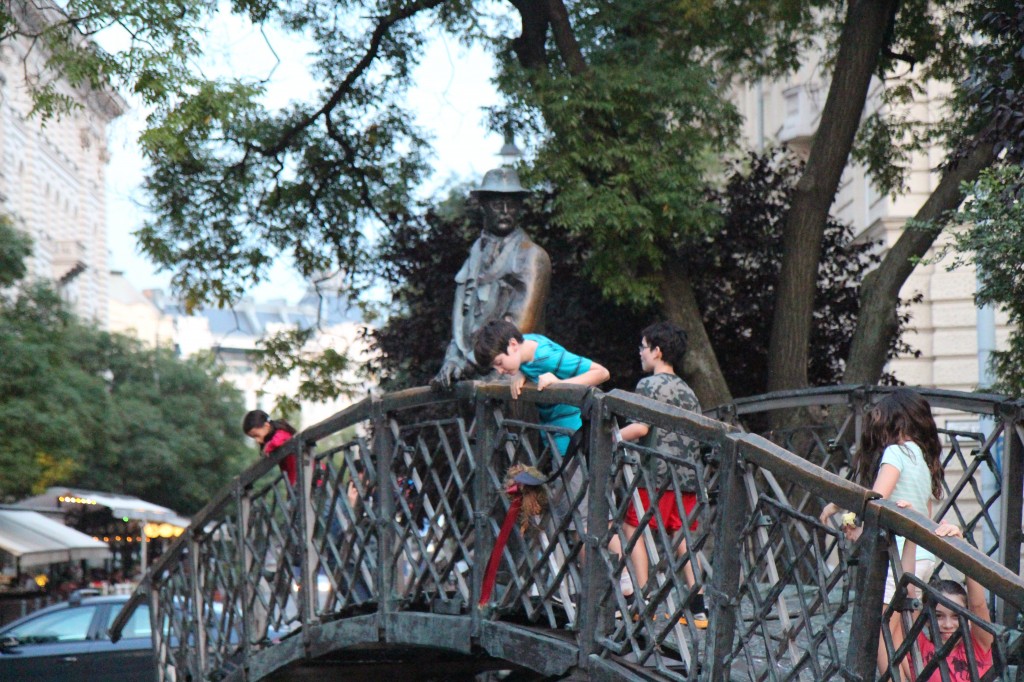 It is so humbling to see and hear of those who stood up and fought against tyranny.

To those who stand against our enemies now, thank you.

I have never had to yearn for freedom.  I have slept every night under the blanket of freedom provided by the hard work and sacrifice of others and wrought by the hand of God.

Freedom.  May we hold it close forever.  May we refuse to compromise with those who glorify tyranny.  May we be inspired by the brave Hungarians who stood for truth, and still seek it.

Part of this family’s Grand Adventure feels weighty, feels challenging, maybe inconvenient.  That must sound crazy, I know.  Travel and wonderful cities, where’s the weight?  But it’s funny to see how much the heart—my heart—can yearn for whatever it thinks it doesn’t have. Sometimes for me, right now, my heart cannot wait to jump into developing community.  To find a church family.  To see how I could get the kids out fishing in the States.  That perhaps I just want to be on the sidelines cheering on our kids as they try their bodies and hearts against the challenges of athletic competition.  And yet, on other days, I stood on those sidelines and thought how great it would be to take the family to an amazing experience that really broadened all of us. Don’t get me wrong, I am so excited each day for those experiences that await us in these hand-picked places and these new friends we get to meet.

I am grateful for the freedom of being able to school our kids on the road.  I think I’ve written previously that some of the Europeans we meet can hardly wrap their mind around the concept.  This is quite understandable since it’s illegal in their country to teach your children at home.  We do not feel that we must always home educate these beloved kids but we are certainly mindful of the tremendous freedom that we have been granted.  That flexibility, that freedom makes adventures like this possible.

We hope to step outside of our normal lives, for a season of our life.  We hope to invest in some time together and to maybe slow time down a bit.  That whatever may come, to know that we jumped at valuing our time together while it is called today.

One touring day’s evening, we enjoy a walk along the bank of the Danube.  We crane our necks to see above us and walk half-backwards as the lights of Parliament come on.  We attempt, somewhat successfully, to keep our small people from accidentally zig-zagging into the paths of oncoming joggers.  We really work to keep them cognizant of the river itself and its high, concrete bank.  Tourists and locals alike are out on this breathtaking evening near the Chain Bridge.  Our family continues the day’s walk back to our flat and we fall into our beds.

We sleep very well that night–and every night–under that blanket. 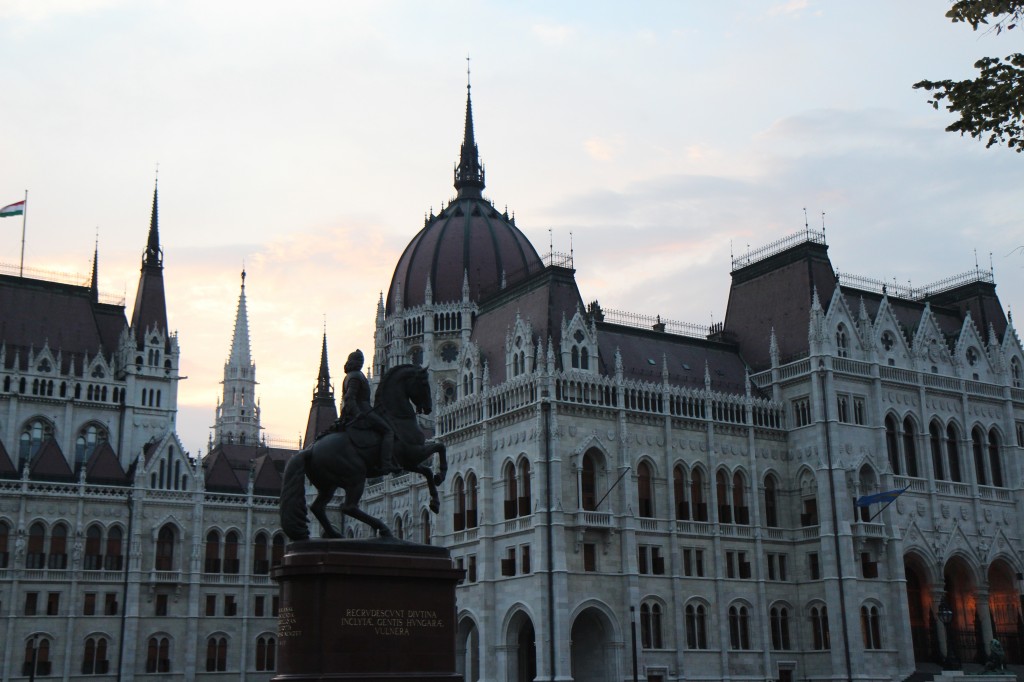 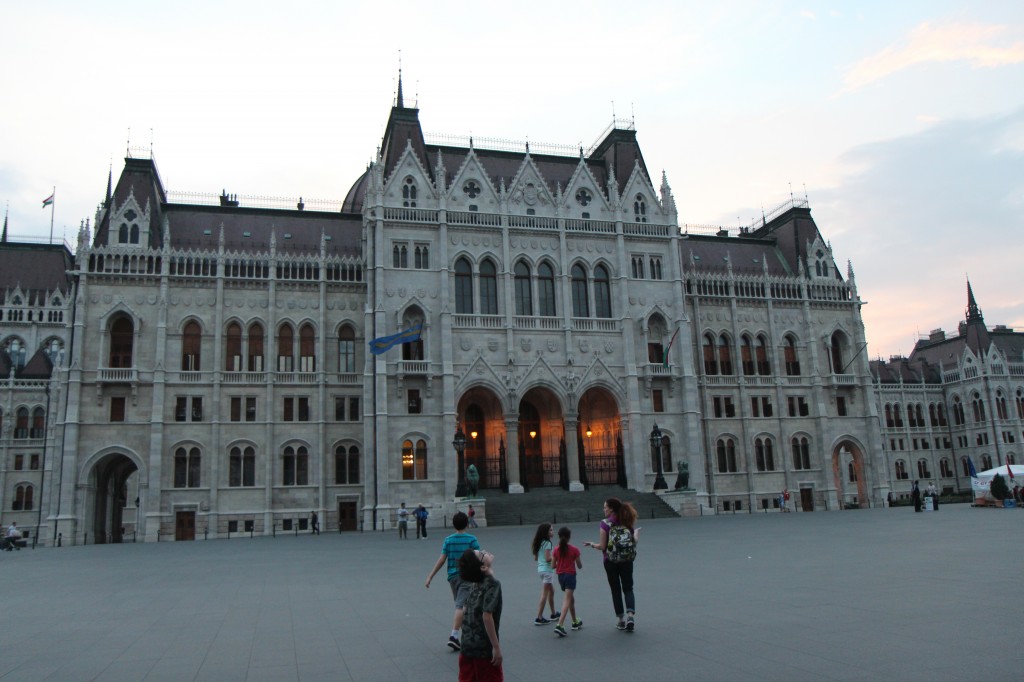 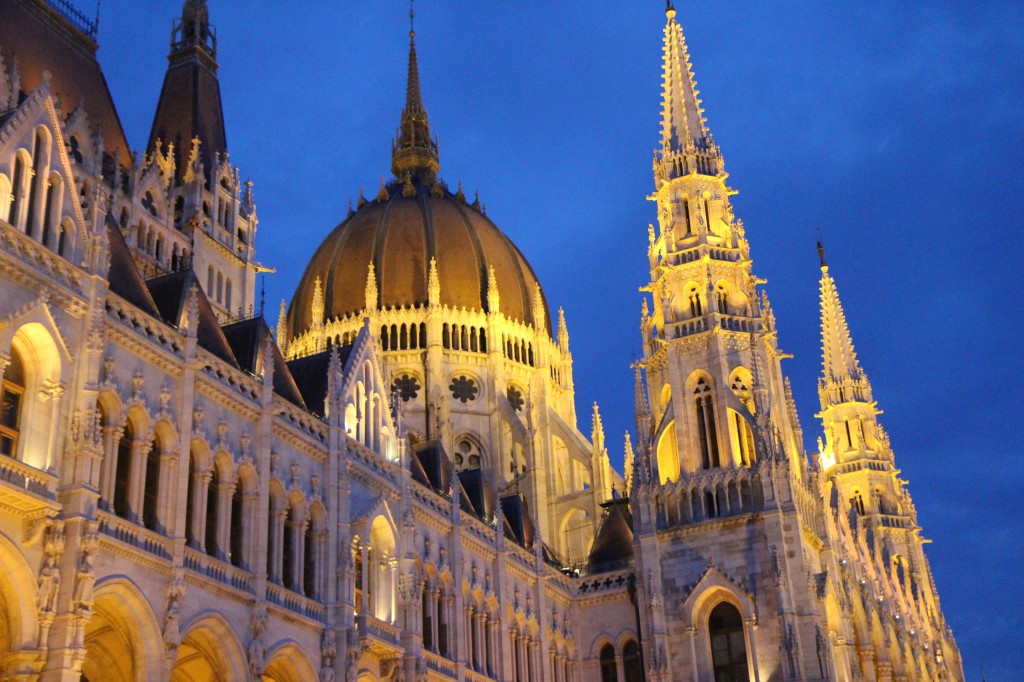 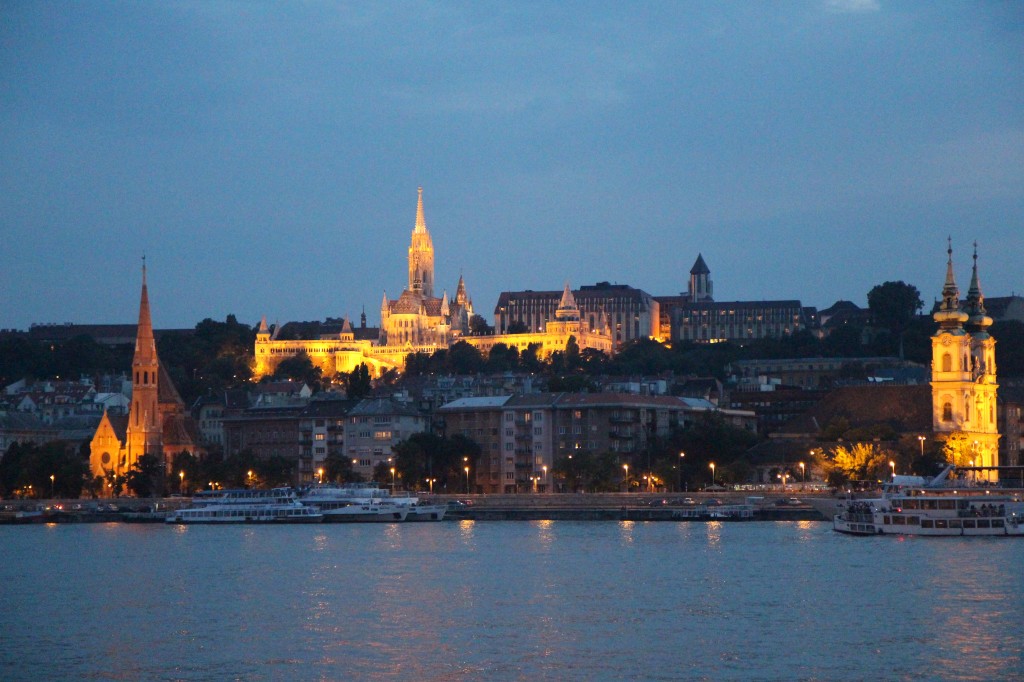 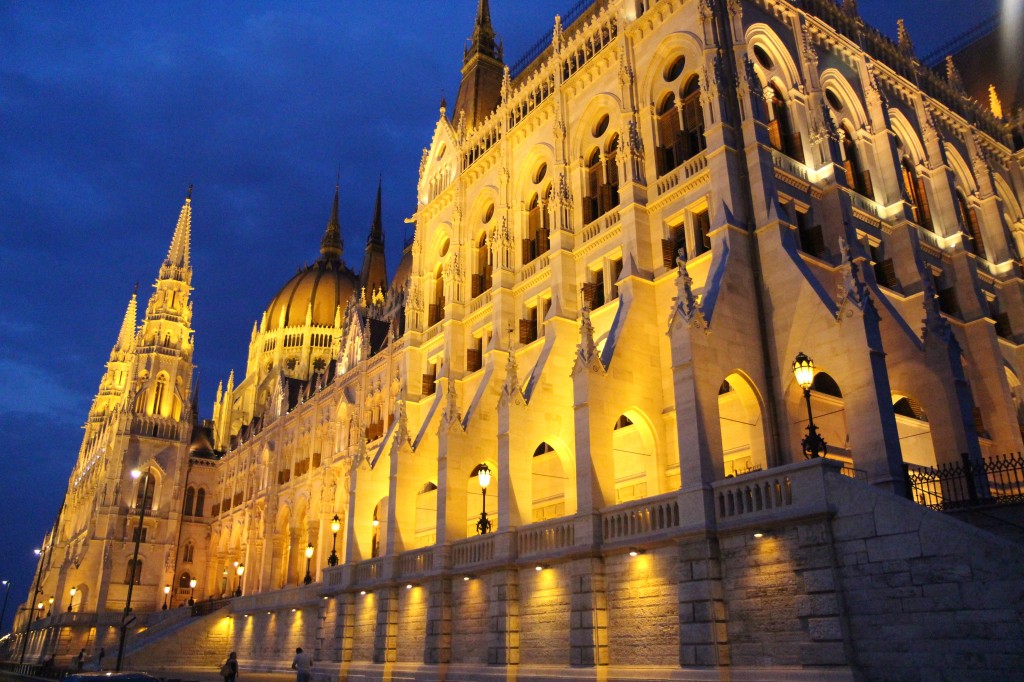 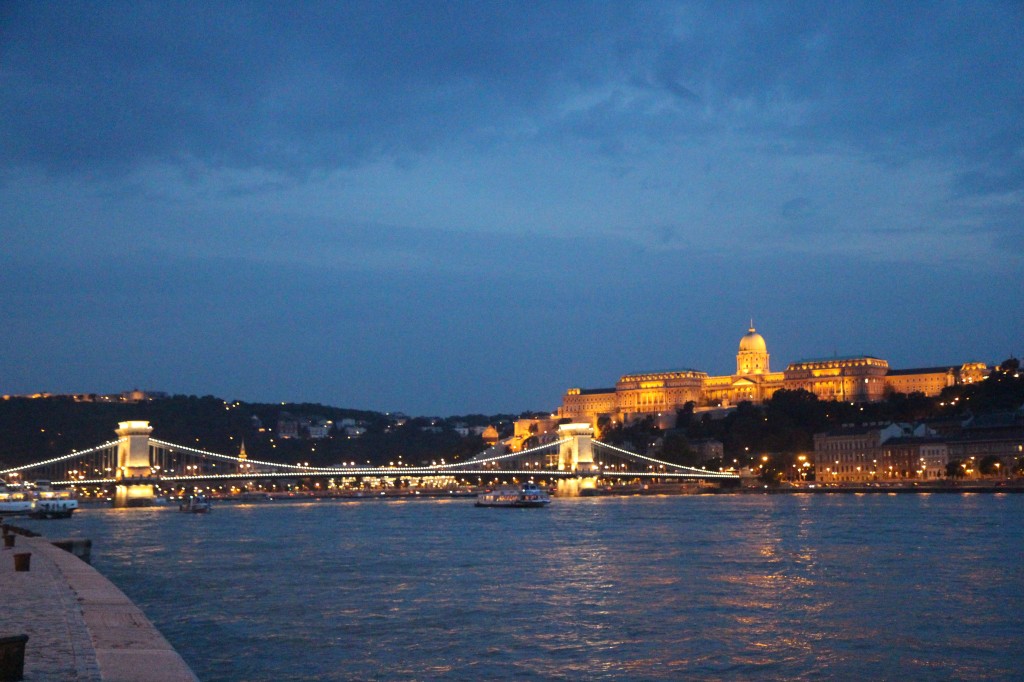 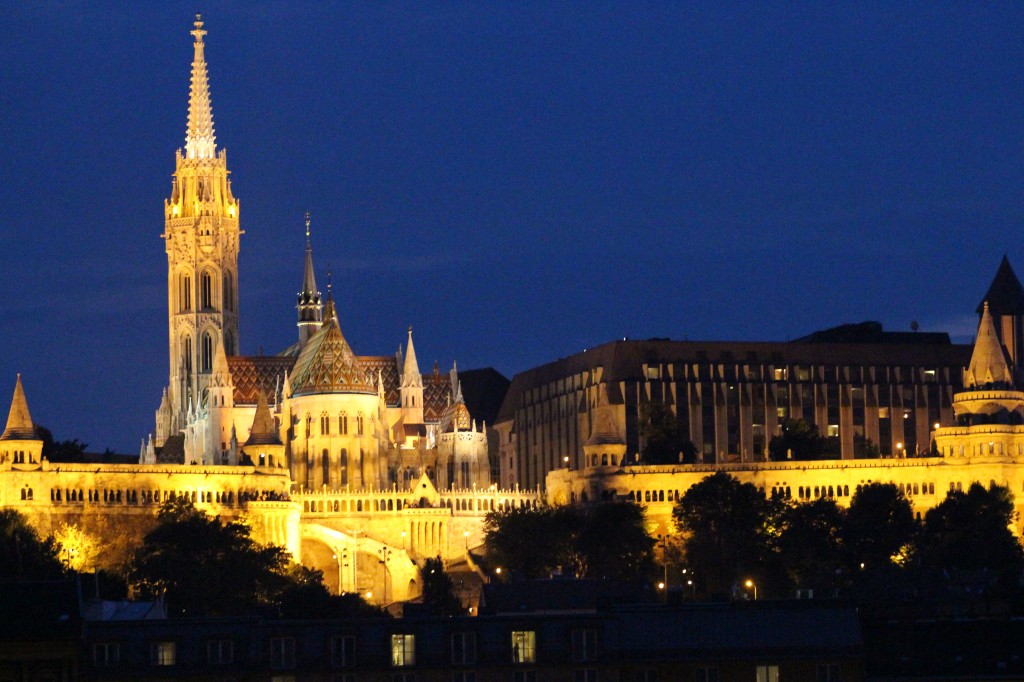 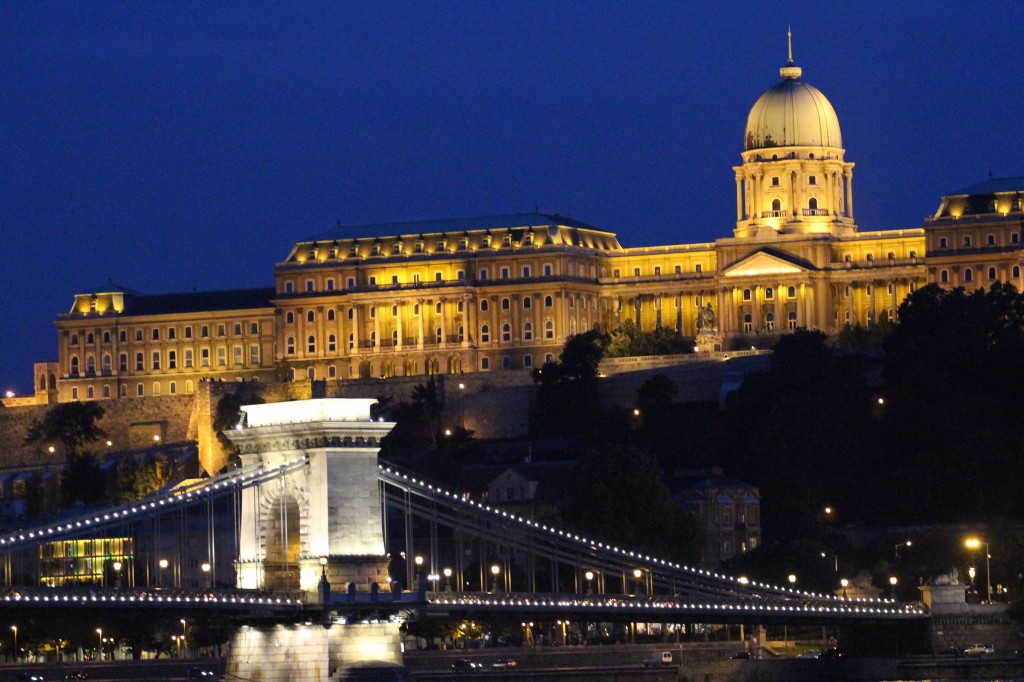 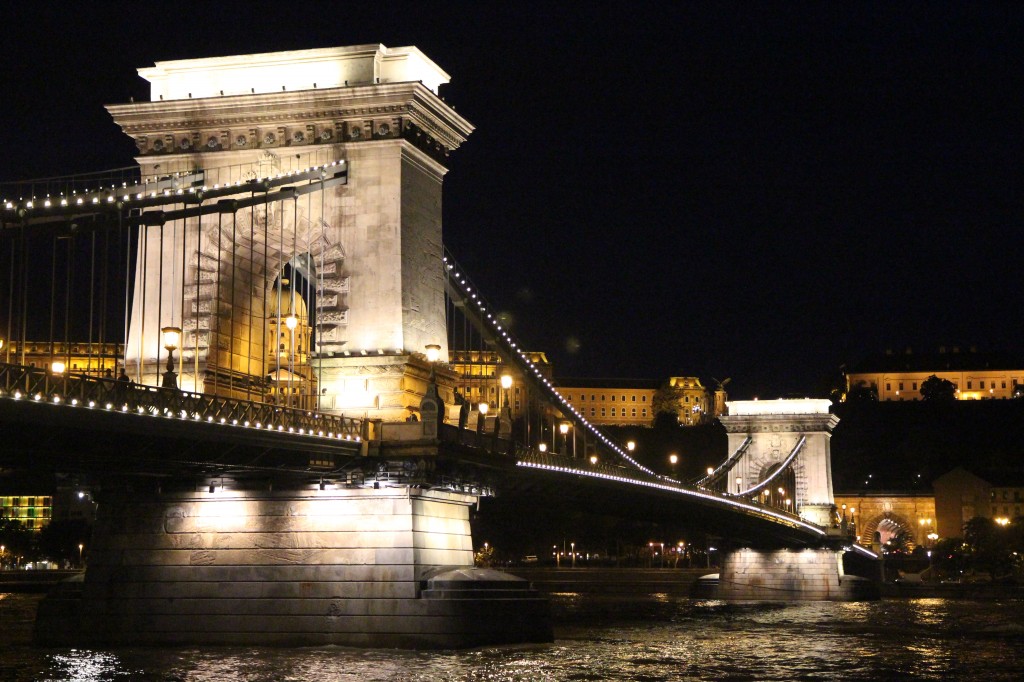 4 thoughts on “One thing we treasure”