One day, we walk along the heights overlooking the Vltava river enjoying the sun glinting off the water, the boats and the bridges. 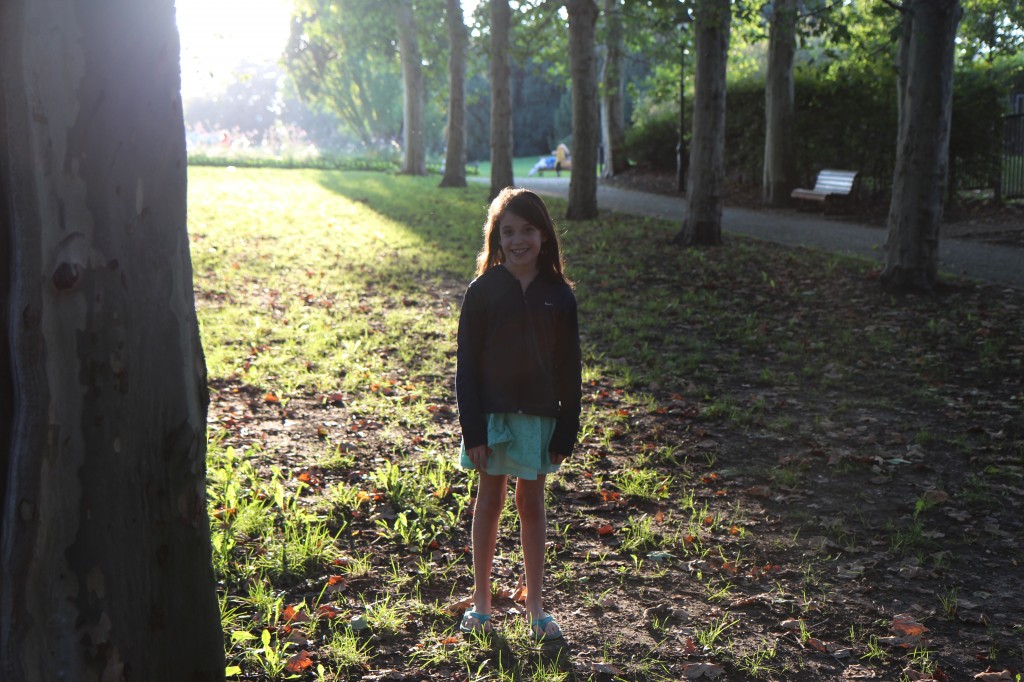 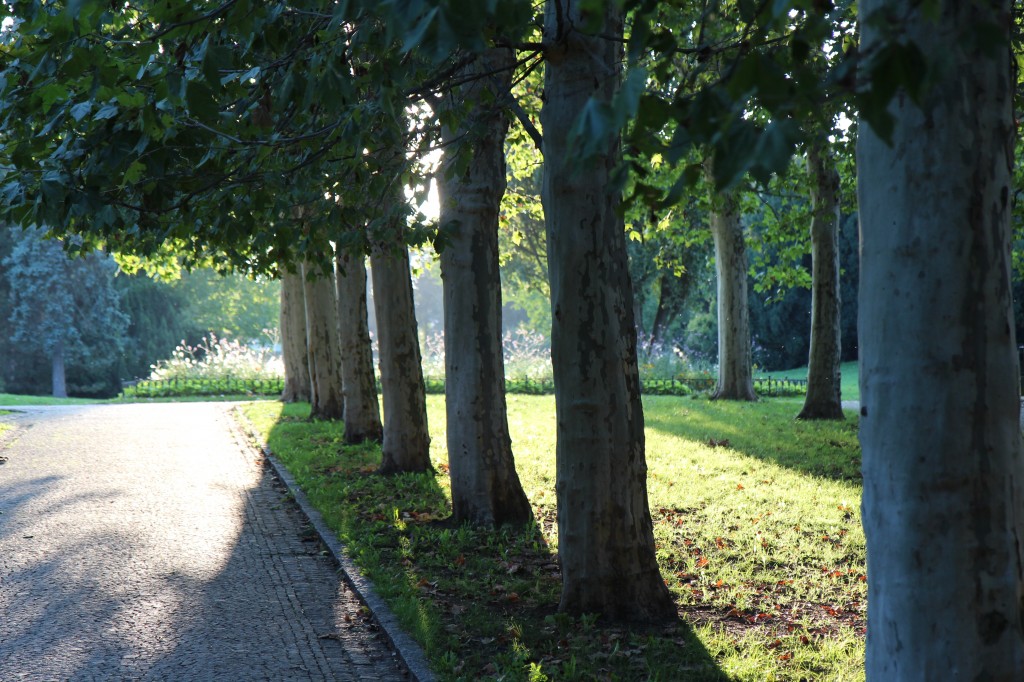 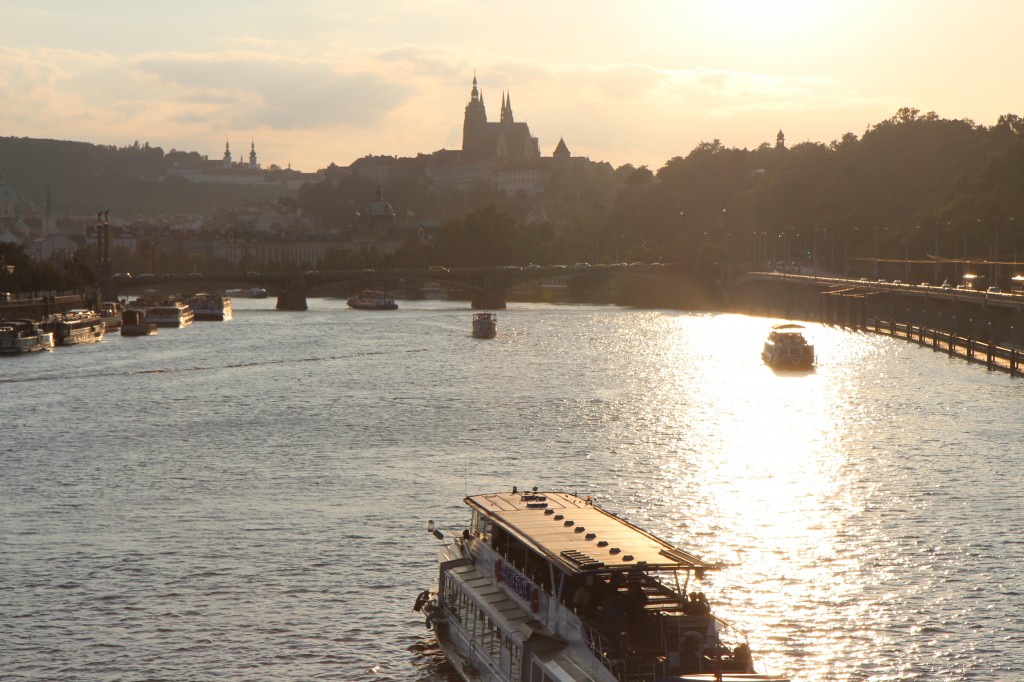 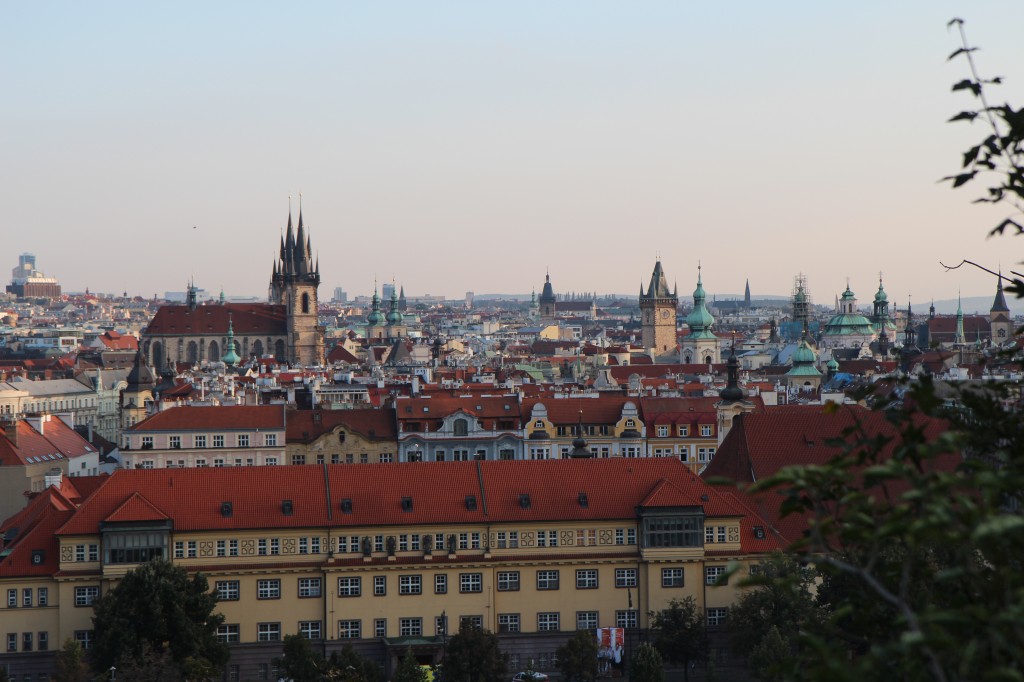 Hurrying down and across the river to find a place with Czech food, we take in the sights quickly on our way to dinner and a symphony concert we’ve booked in this famed capital of music.  The restaurant celebrates the nostalgia for Soviet days with the sparse decorations of a train depot restaurant and the fact that its staff are advised to act professional, but gruff, in their service.  It is recommended in the guidebook and represents a rare sit-down dinner for our clan as we are certainly watching the budget for such a long trip! 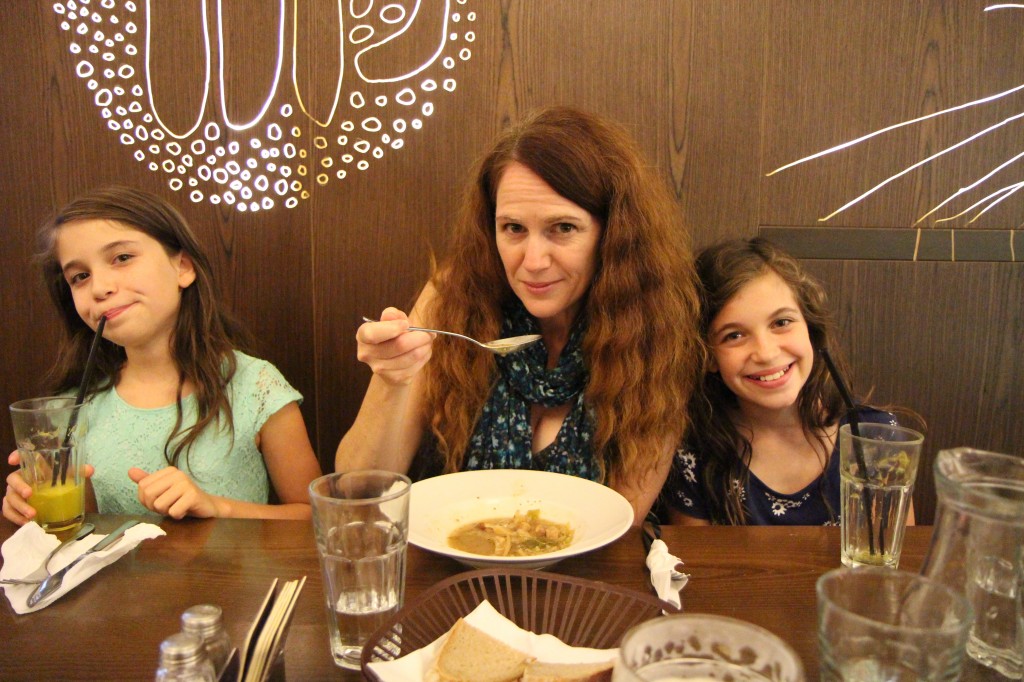 The restaurant is huge, but every table looks booked for a party of six.  A few “reserved” signs mark off the handful of empty tables.  One waitress encourages us to move along but another learns that we are only in for a quick meal and plan to be long gone by the time the table is reserved.  They finally award us a table and we order quickly.  Our food takes a while to come despite the efforts of the wait staff but we decide it is too late to cancel our order and run for the concert.  The trout and brussel sprout soup are simply fantastic.  The Czech beer fits beautifully with the meal.  We eat as fast as we can and run for the seats we’ve booked at the back of the concert hall for Mahler’s Second Symphony. 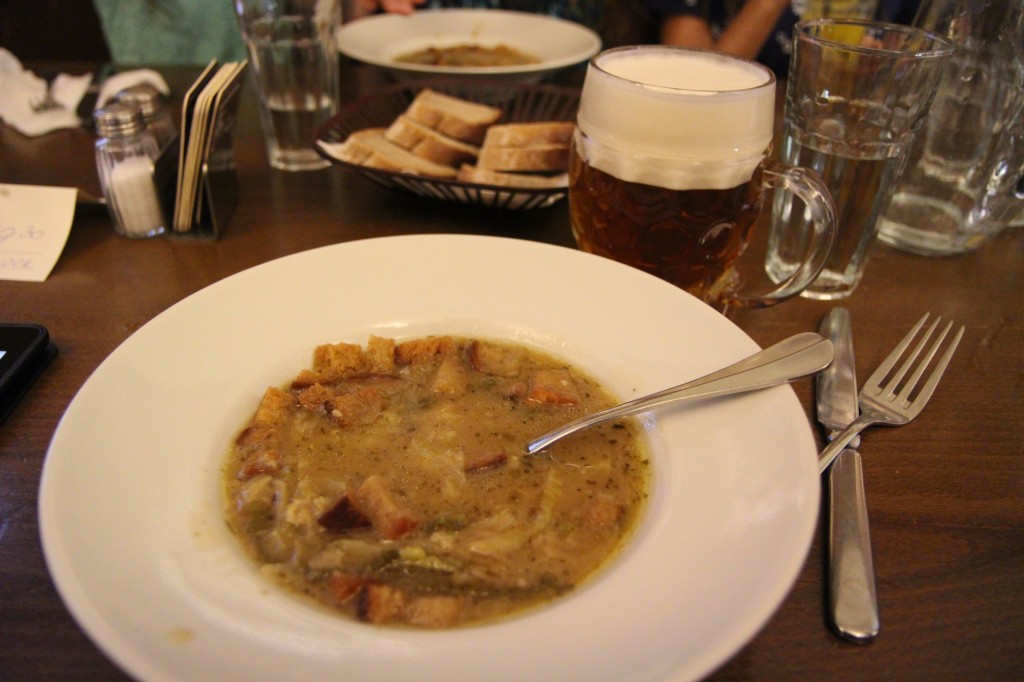 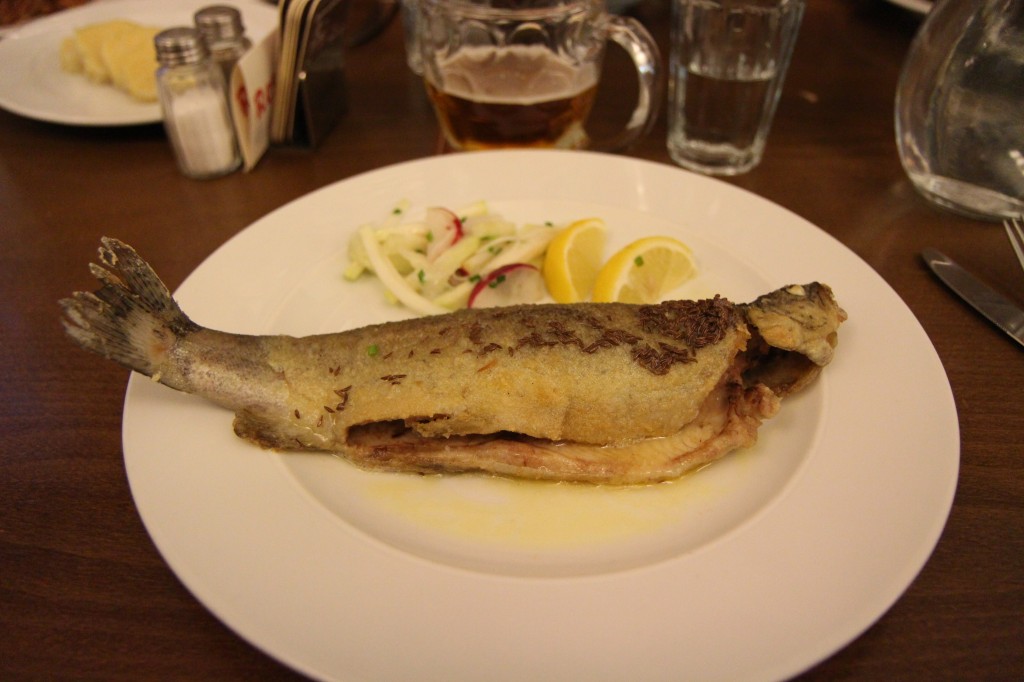 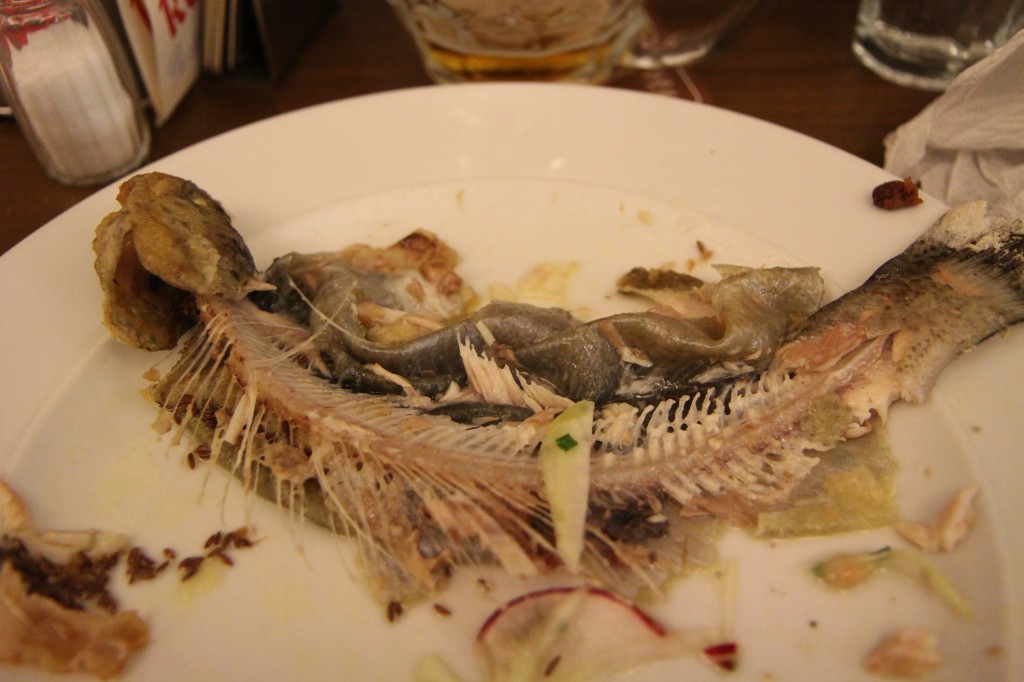 We are about 7-8 minutes late to the concert hall.  Uh-oh.  No significant problem, we hope.

I’d seen the website had mentioned there would be no break in the performance.  And, as you’ve likely guessed, the hall staff refuse to let us enter late as we would disrupt the performance.  We’d thought we’d have a chance as our seats are on the end of the very last row.  Ouch, my bad.  (we’d booked them there in case the kids had decided they’d had enough and we had to depart early).

We are directed upstairs to a stand-up balcony.  A few unfortunate incidents occur including me spending an inordinate amount of time trying to speak with a manager since the website did not mention that latecomers would not be seated.

Lisa’s view–Lisa admits to anger as she tried to process the balcony, not understanding we would never be seated. One child was entranced by the music.  One huffed and puffed at standing at the late hour of 19:30 and reclined in the corner on a rustling jacket.  Another child had many whispered questions.  A fourth had to go to the bathroom.  How does that work?  Will they let us back in the balcony?  Brent was still talking with the manager. (Would they even let Brent in?  He’s been gone awhile, are they keeping him out?) We couldn’t all five go to the bathroom, that would be disruptive.  A child couldn’t go by themselves when they don’t speak Czech, and people had not been overly friendly here.

The kids are quiet by kid standards but not to the standards of the tense music lover standing next to our family. He complains about our noise several times. We struggle to reconcile the thought of this scheduled musical inspiration that we’d planned for a few weeks prior and the reality of our family now passing our weight from foot to foot.  Lisa sits, listens, and prays Romans 8:28 that  “for those who love God all things work together for good for those who are called according to his purpose” but she’s not “feeling it.”

Then the doors are opened behind us into “our” balcony and stands are brought in with musicians.   Several members of the orchestra will be playing trumpet and french horn within arm’s reach.  Their play is responsive with the orchestra and choir on the stage. The experience, volume and proximity to the live music is far better than what we’d have had in our seats downstairs.  Not to mention our proximity to the ceiling gave us an upfront view of the ceiling artwork and sculpture.  The conclusion was beauty deep enough for tears.  Even the uptight neighbor relaxed. 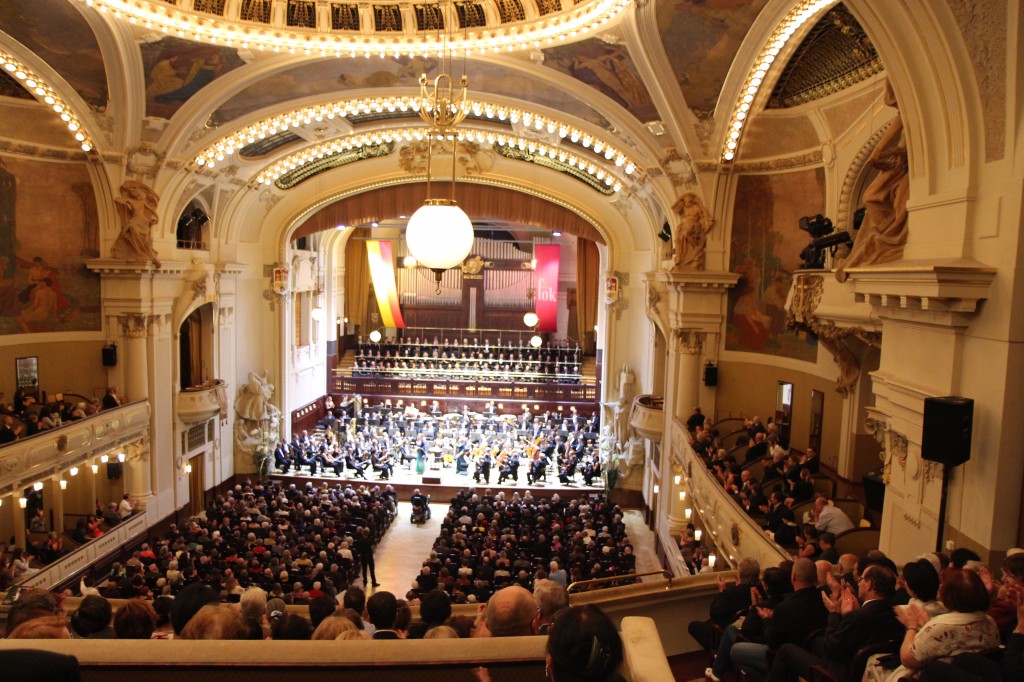 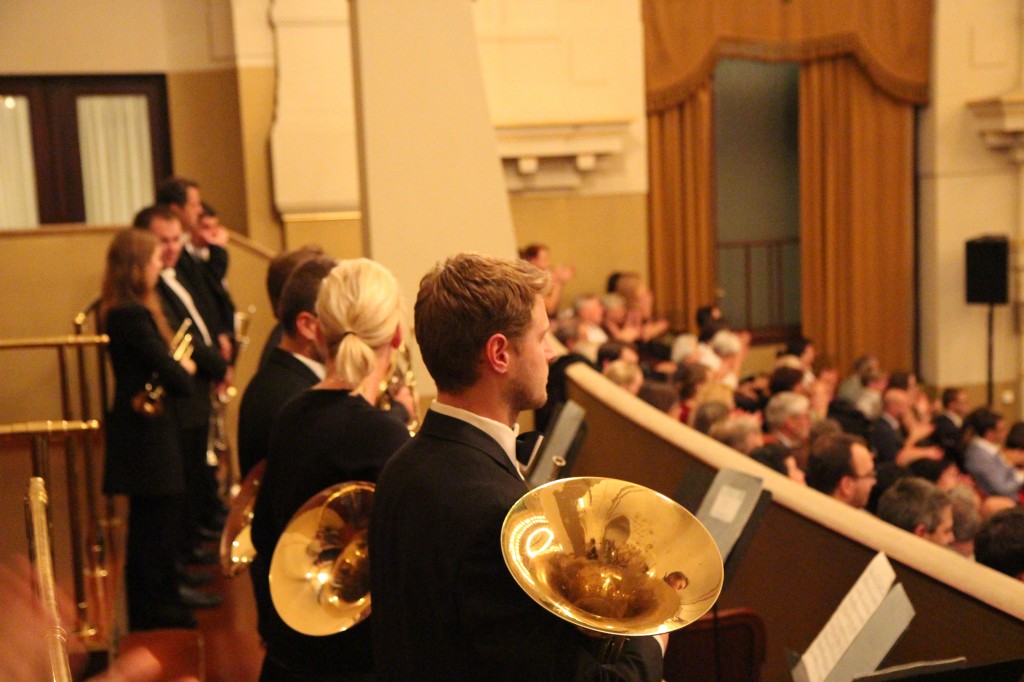 Upon reflection later that night, the experience exemplifies the travel analogy to Lisa and I.  I had messed up by bringing our family later to the performance than we’d planned.  We wrestled with our own disappointment at not meeting the expectations we’d set up for the performance.  But then once we embrace the new, we meet with a better experience than we’d hoped.

What an analogy too for the Christian life and the expectations we wrestle with when life’s curveballs come our way.  Travel is a condensed way of living that is teaching us much.  No one knows when an illness may strike or a loved one may face a real challenge yet I know I am often so tempted to be caught up in the frustrations of the moment and to surrender my joy without a fight.  Apparently, I need to be taught the same lessons again and again.  The human condition, I suppose.  Thank God, His unmerited grace leads us back to the path of joy.

To their credit, the manager advised that the “latecomers would not be seated” blurb was written only in Czech but the next day he offers us discounted seats to another performance.  We have other plans but sure appreciate his efforts.

Castle Hill stands high and proud over Prague and the walk up to its vistas is a good climb.  Prague Castle is the largest ancient castle in the world.  The “Hill” holds the official residence of the Czech president, romanesque St George’s basilica, a courtyard and the gothic St Vitus cathedral. 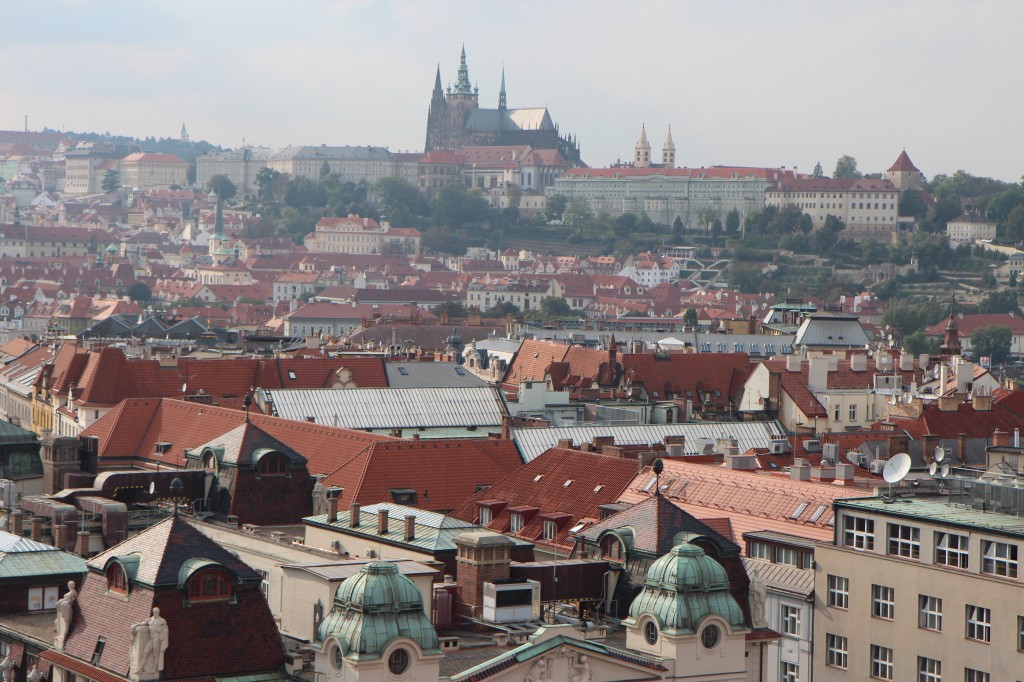 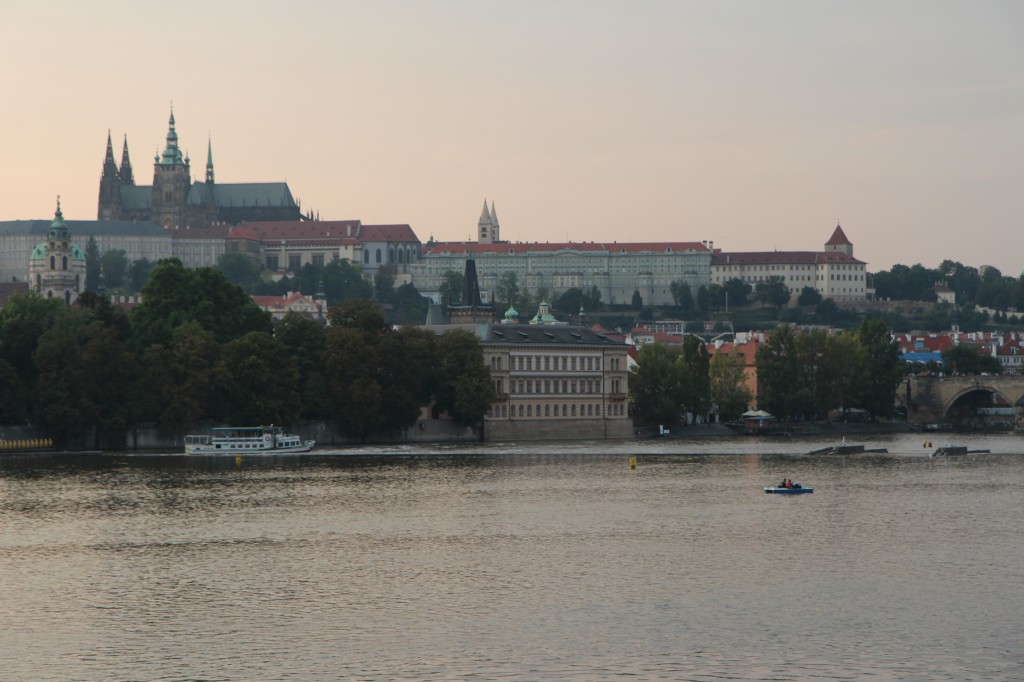 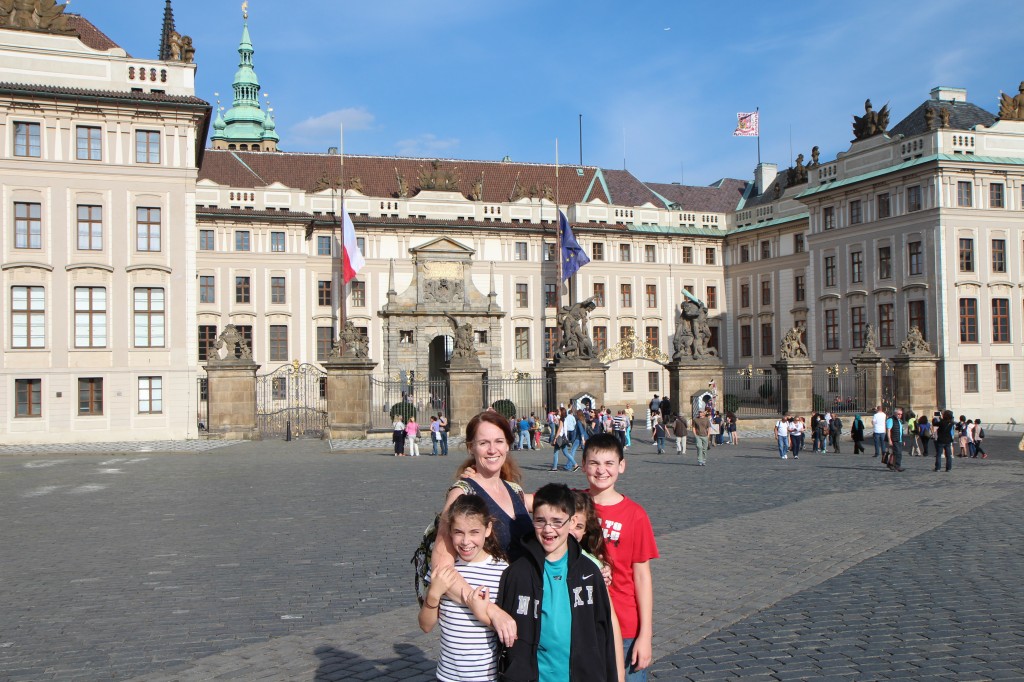 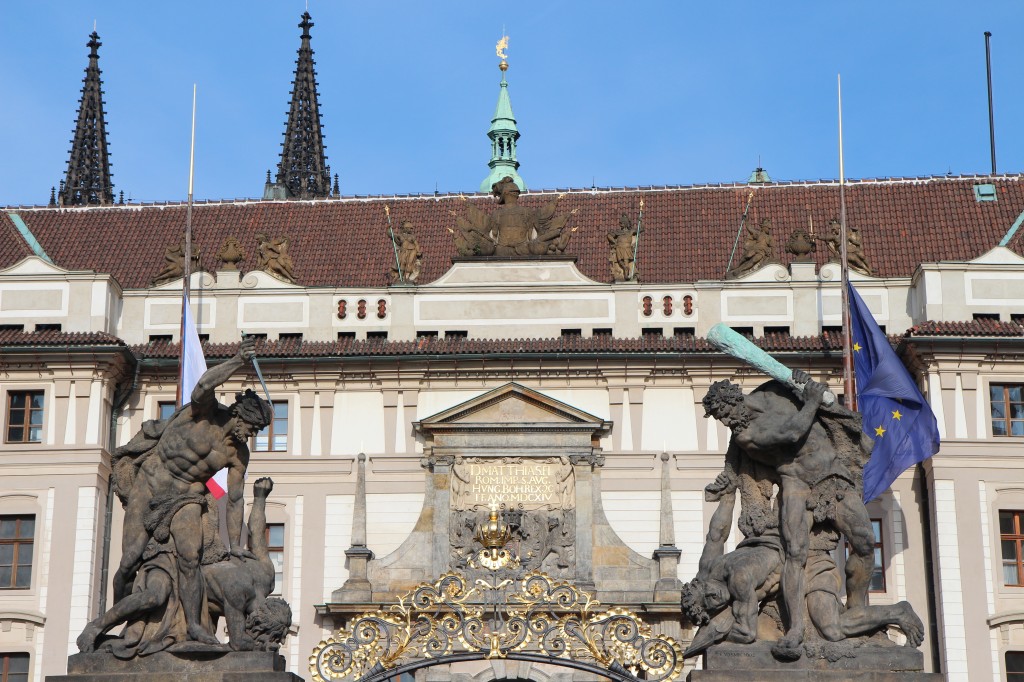 We duck into the St Vitus cathedral to glimpse the stained glass window done by Alfons Mucha.  St Vitus was under construction for over six centuries. 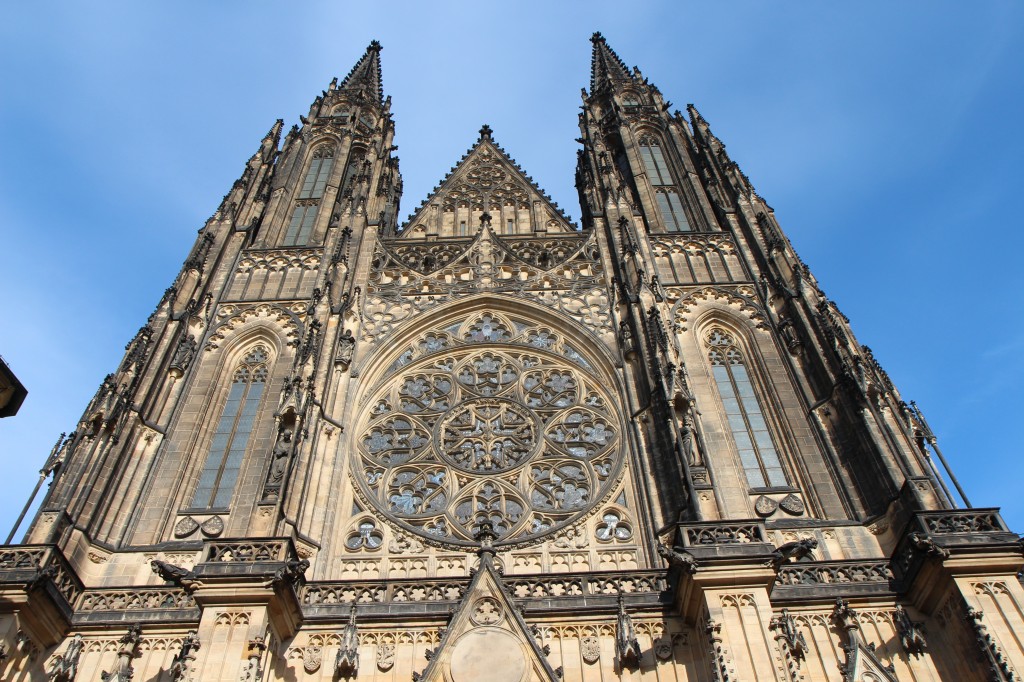 It’s hard to resist a picture with the castle guards.  Meanwhile, a lone man is waving a sign and protesting a government policy of some type.  Unfortunately, no one pays him much mind and I wonder if everyone outside the castle is from somewhere else. 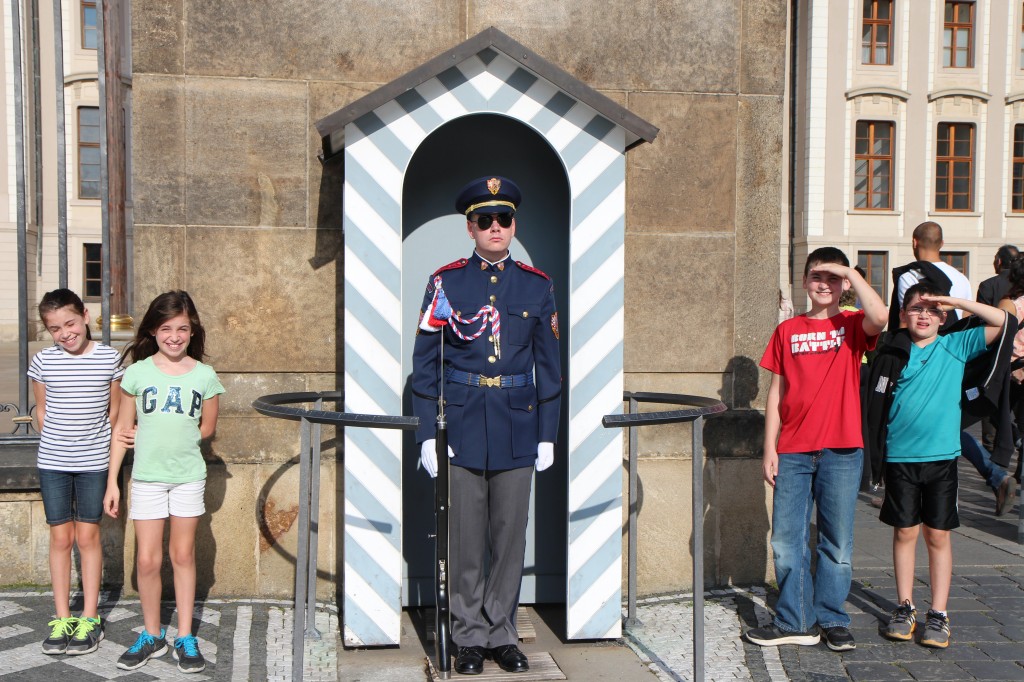 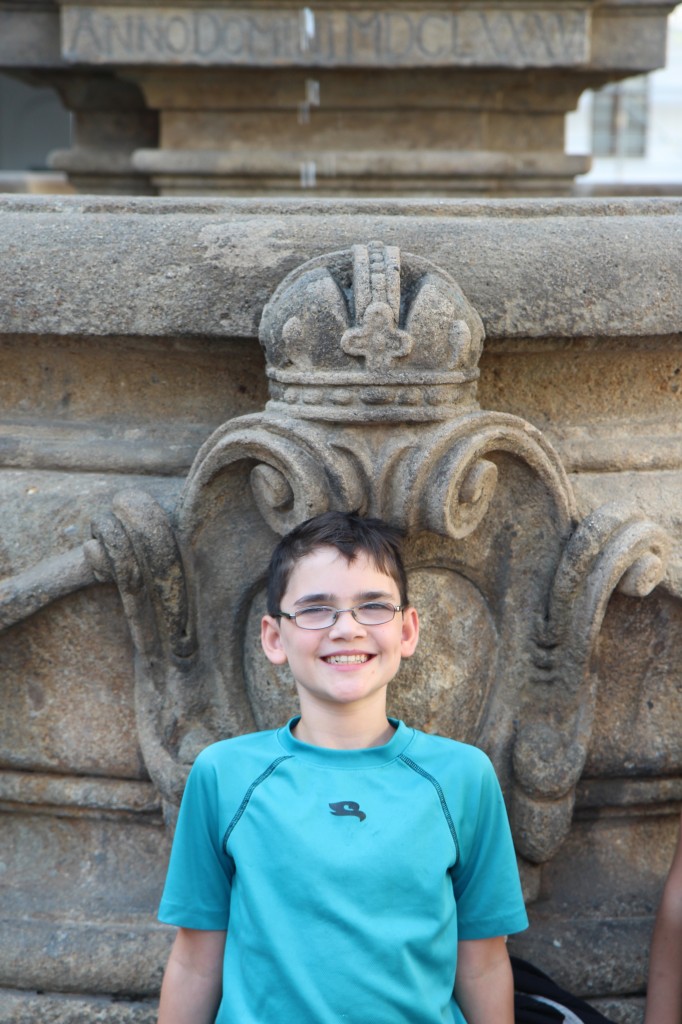 [Will and his stone crown] 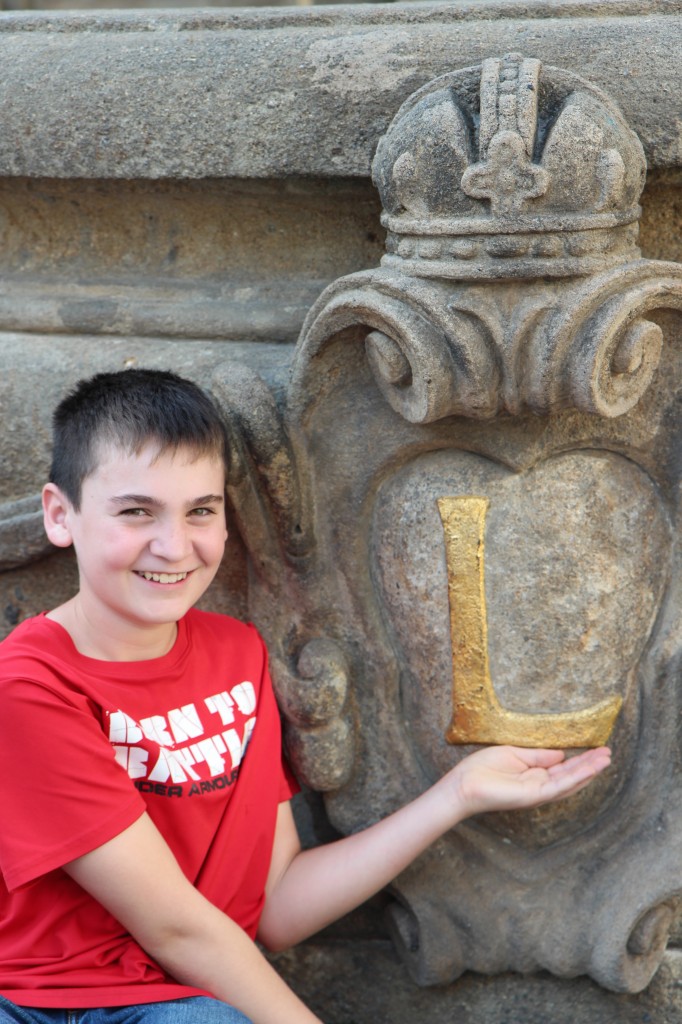 A podcast we’d enjoyed explained an American family’s connection to Czech properties.  The Lobkowicz family is a Czech royal family and owned many castles before all was seized by the Communists.  The family lived in the Boston area and one of the sons went to Harvard.  After the Wall came down, it was all returned to the family in 1990.  Their wealth includes original manuscripts from Beethoven and Mozart but the family could not afford the taxes and upkeep on all their castles and properties.  One of the family palaces is here on Castle Hill.  The son moved back to Prague after the fall of the Communist government to receive, restore and display the family’s ancestral holdings.  Nice work if you can get it!

The peerless Charles Bridge awes with its thirty statues and its crowds.  It was the only bridge across the river for centuries.  The first stone was laid in 1357 by the Holy Roman Emperor who was into numerology.  Czech legend declares he laid it at 5:31 AM on 9 July so that the beginning of the bridge would be 1357 9, 7 5:31.  This mathematical bridge was thought to provide strength to the bridge.  The Charles bridge was the only means of crossing the river until 1841.  We cross it with the sun low in the sky illuminating the caricature artists’ canvases as they call out for tourists to have their likenesses painted.  This is the bridge where St John of Nepomuk was thrown to his death from a bridge parapet in 1393.  Supposedly, St John had taken the confession of the queen and would not violate the seal of confession despite the interrogations of her husband, King Wenceslas.  The king then had him killed.  We have seen this saint’s courage celebrated in statues and reliefs in Vienna and in Germany.   The statue of St John and his fate has turned bright bronze from the many hands rubbing his commemoration to pay him homage.  We join in.

And the one with the cute dog on it for the peeps. 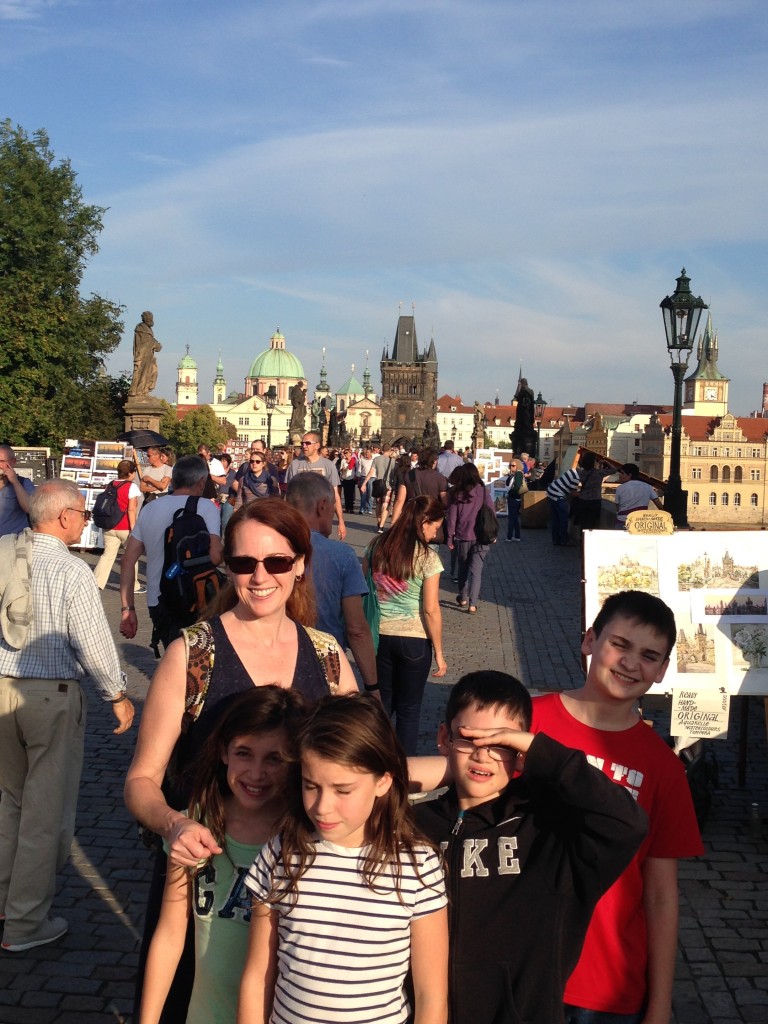 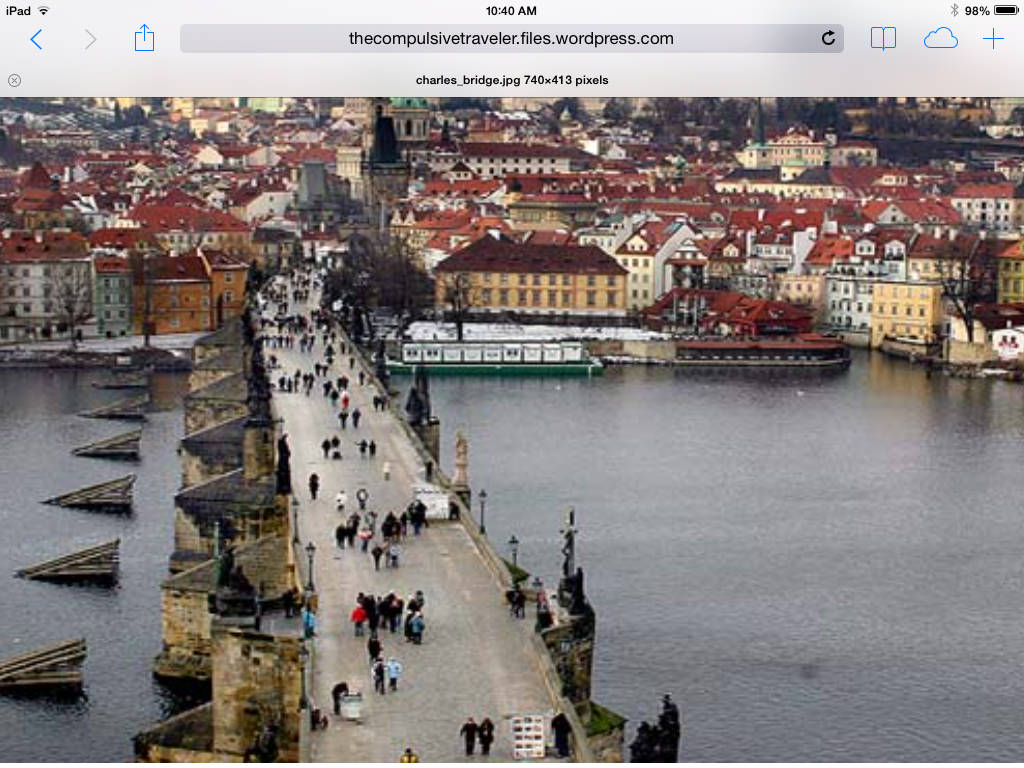 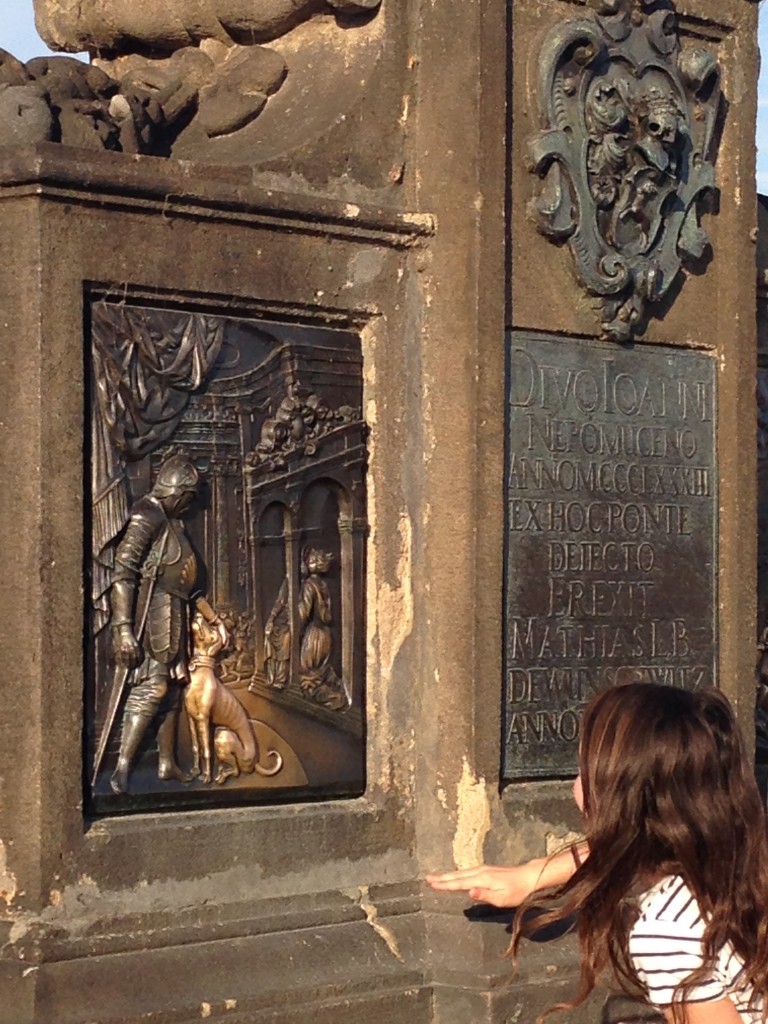 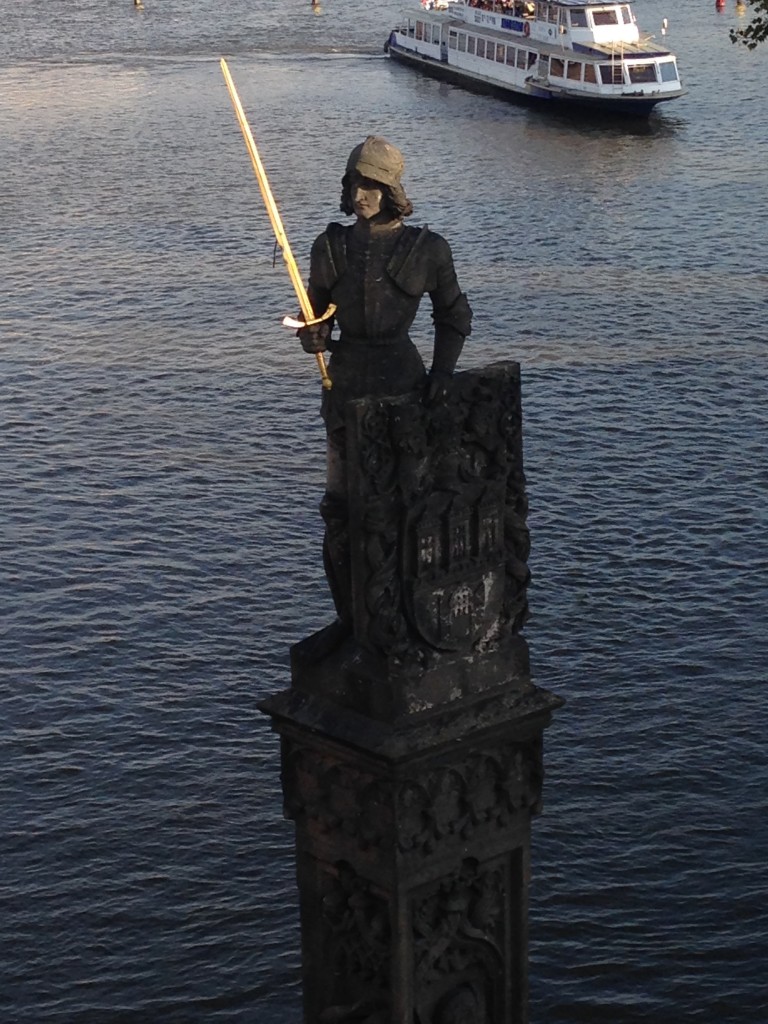 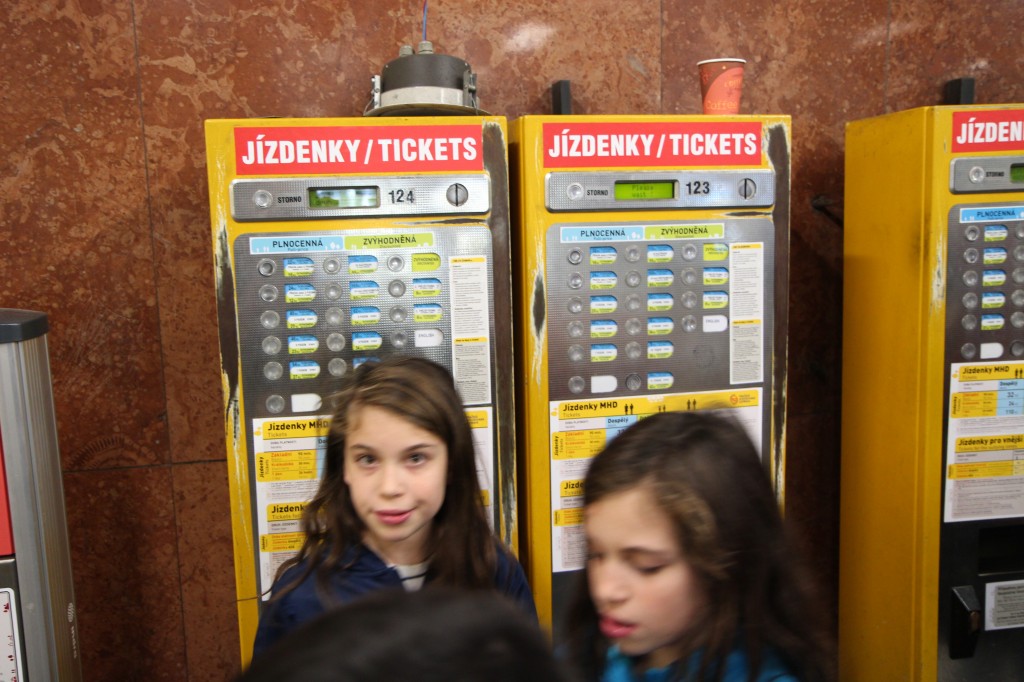 [at the train ticket machine for the subway]

One night back in our suburb of Tursko we are invite up to Jan & Jolana’s upstairs for a beer.  Jan’s college-bound daughter and her friend also sit at the table while Jolana stays on her feet hosting.  We walk into a table loaded with meats, cheeses, and pickles amongst other appetizers.  Jan has a guitar and we interrupt the Czech songs.

Lisa keeps slowly finishing her glass and is surprised when Jolana keeps refilling it.  Jan and I are into a few Czech beers.

After asking how old the home we are in is, we ask about the oldest structure in the village.  “How old is the number 1?”  Jolana asked.  They discussed it and we just wondered, “What’s the number 1?”  We hear of how the houses are numbered in the villages.  The oldest house in the village will be a prominently displayed #1—generally the church or the priest’s house.  The other numbers are added in order of age. Our home for the week was #66.  Sometimes, for instance in Prague, an additional physical address building number helps with location.  In Prague, the same thing occurs, city block by city block.  So an apartment building will have two large numbers by the door in different colors.

Jan and Jolana are wonderfully gracious and open hosts.  They are both highly educated professionals with strong English skills they use frequently in their occupations.   When you name your child here, you must pick a name from the enormous list of approved names.  If enough people want to add a name, it can be approved over time.  But it is interesting how foreign this is to the American ear and our idea of individual freedom.  Another interesting fact is that the Czech Republic is largely atheist.  One website quotes a guide describing it as about 20 percent Christian.  Jan and Jolana believe it is closer to 95% atheist.

They tell us how successful the Soviet propaganda campaigns were in the schools as they grew up.  As soon as the Cold War ended, the Czech kids stopped having to learn Russian.  If I understood it correctly, the Czechs also began to have to work harder instead of having the job security that came with the Soviet presence.  They grew up largely unexposed to Western music, movies, or culture.

Their family loves to go camping just like ours and they get together with other families to camp and play games.  We wish we had our tent and could go with them!  They are doting parents to Vojta and we are thrilled to be at their place.

Without meaning to, we stay up late nursing our drinks and talking of college and Czech history and music and America.  They are so kind and welcoming that we don’t seem to notice how late it is and the next morning Jan & Jolana will be off to work early.