The Wingfields, or more likely their kids, took us to the perfect kid activity near Xanten:  a kind of small theme park that we could use in the States.

Will writes about it below…

OK folks, here’s a German word that sounds very funny!  The word is spelled Irland but sounds like “Earland”.   So what’s so funny about that?  Irland means Ireland.  Why do they call it that?  I have no clue, maybe the Romans had a say in that.  Oh yeah, I forgot, the Romans were there.

In the present, Irland is a fun theme park—no coasters, but pedal-powered carts, hay bales, huge Legos (my favorite), water, volcanoes and a variety of slides.  There were slides that looked like you were falling straight down. I actually screamed (so did my sister, but louder than me). 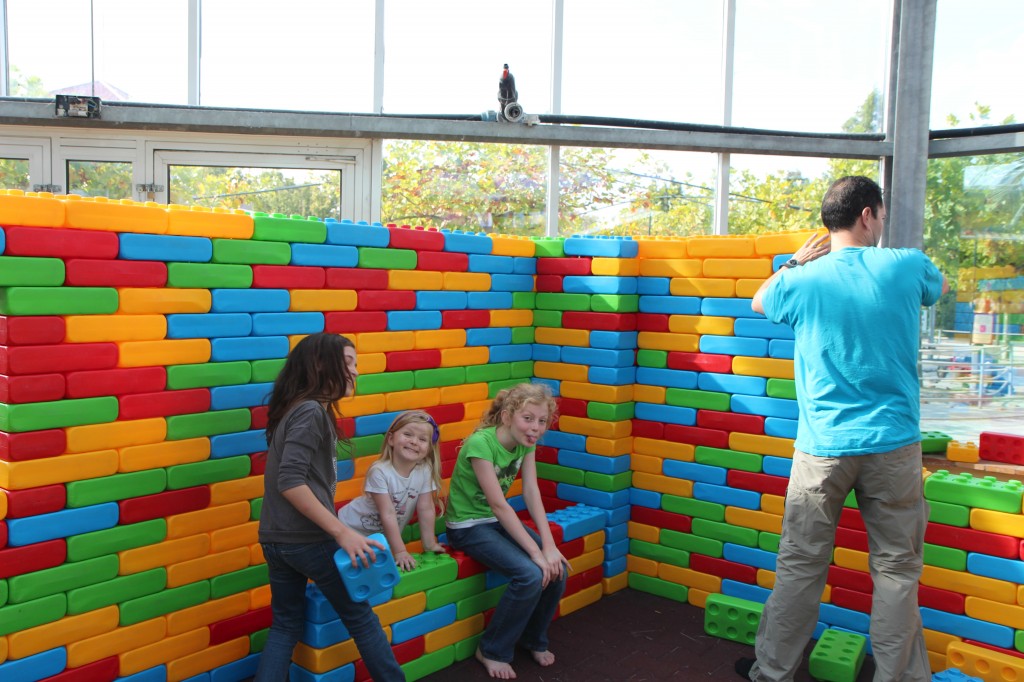 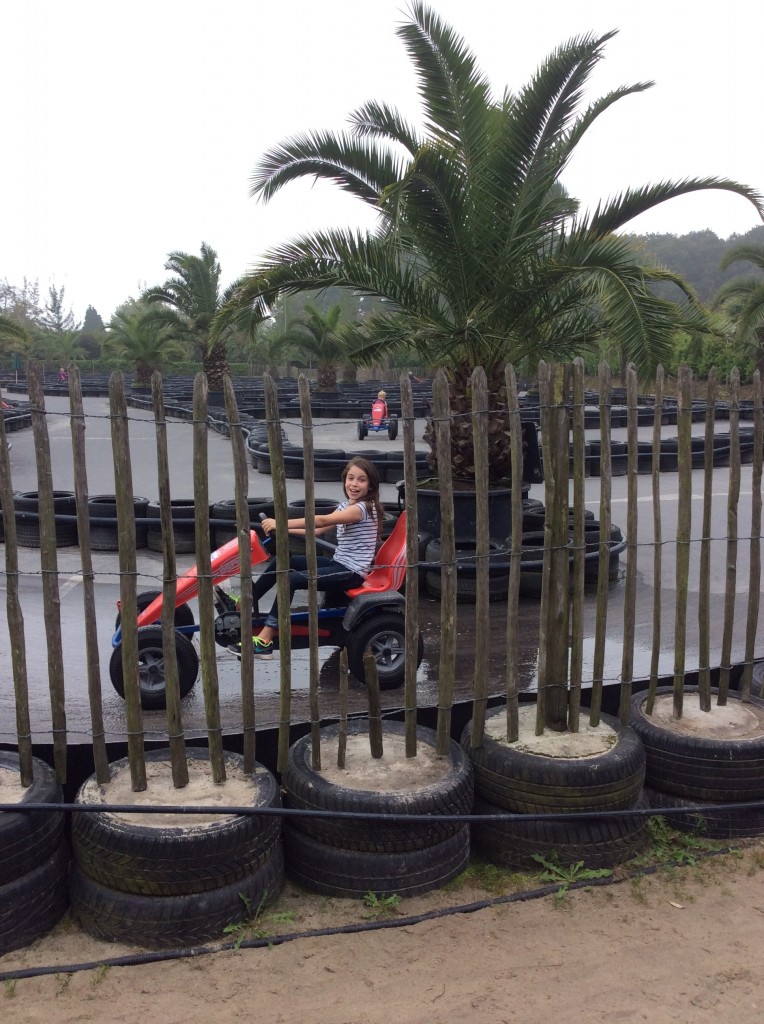 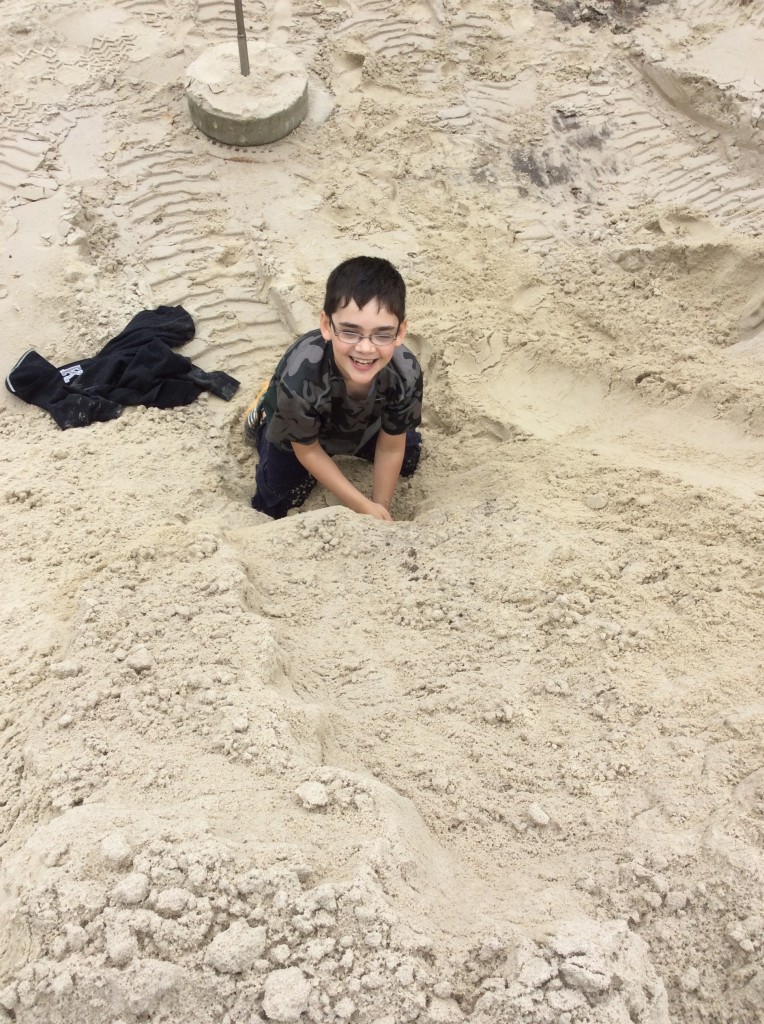 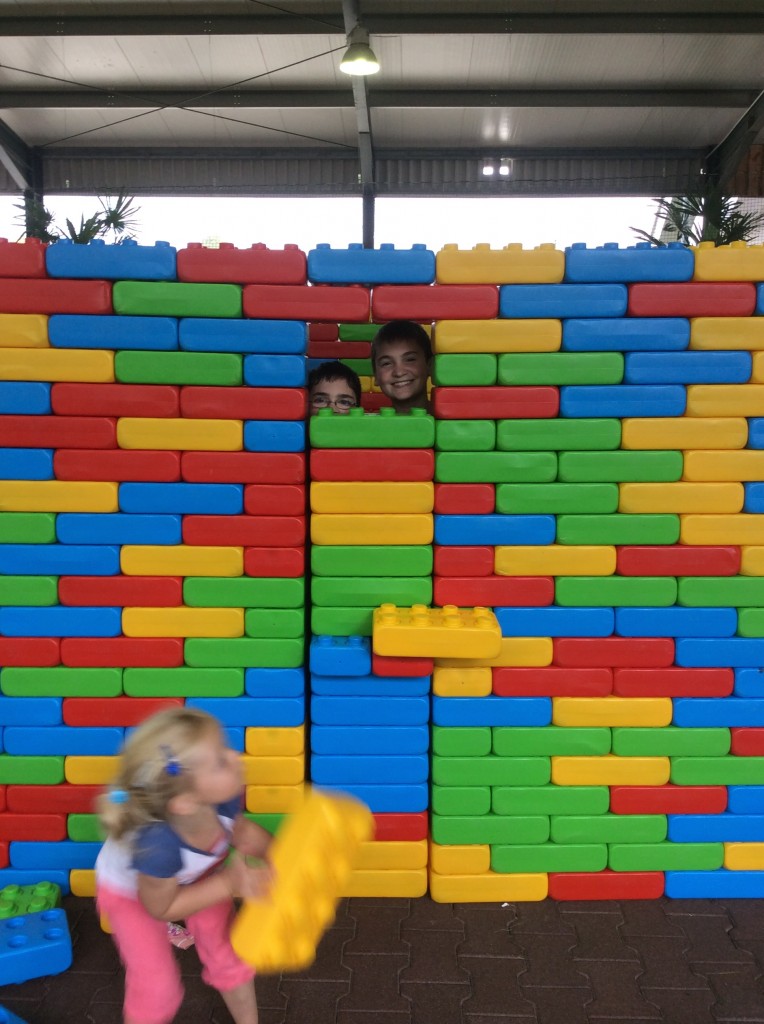 The pedal carts were awesome.  The first one had a huge track made of tires.  We had all kinds of races; half races, long ones and short.  After that we went to the slides.  The slides came from a fake helicopter and a fake airplane.  The first one I went on was mild and short just to get the concept.  Then I went on the one we (me and Luke) called Death Falls (dun dun daa!).  So terrible yells could be heard coming from that dreaded tube.

To our surprise, inside the warehouse were piles of Legos!  And big ones too!  All thoughts forgotten, we marched to a place and started to build a massive fort!  It even had a door that I made with many blocks.  Once it was very high, I remembered the girls.  Where were they?  The question was soon answered.  In the corner, the girls were building a house.  Problem solved. We continued and finally we were done!  It was taller than Dad (and Mom)!  Then we had to leave. 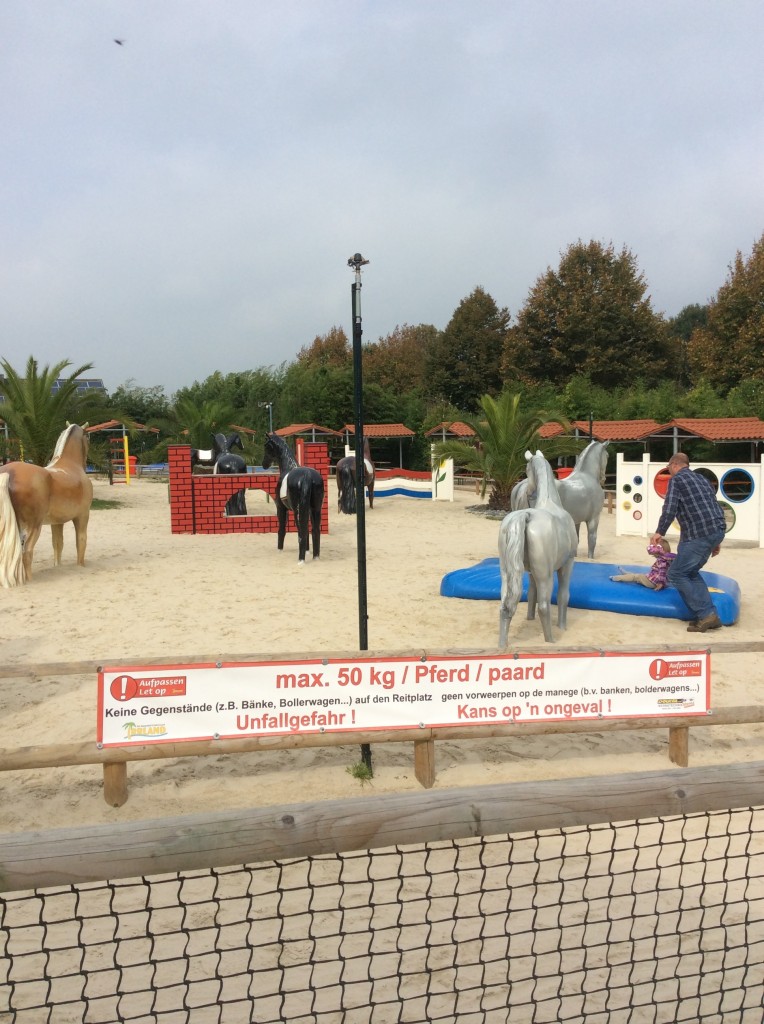 The cathedral in Xanten, or Xantener Dom (“Dahm”), was almost completely destroyed in WWII.  Allied bomber pilots used the easily recognized twin towers of the Dom as a visual reference to turn away from the Rhine river and go home.  They also knew that German anti-aircraft guns were nearby.  They’d release their unused bombs in the vicinity so they could climb higher and be more maneuverable.  After the war, the town debated and took the decision to rebuild the Dom completely.  Many German cities did not rebuild their historic centers or cathedrals and replaced buildings with modern counterparts.  I understand this is the reason why you probably don’t hear of many American tourists headed to see the historic center of Hamburg.

The Xantener Dom cornerstone was laid in 1253 and construction took 281 years.  It was a federal government project…   Today after the post-WWII reconstruction, you can buy pieces of the original cathedral.  Stonemasons actually live on site and are still reproducing historic parts of the Dom and its outlying buildings.  Amazing.

The Wingfields are members of the church and their son Elee is even an altar server in the German mass.  Lee had been invited to be a bell ringer but had not yet begun.  All across Europe, church bells are rung to call people to services.  After attending the mass in German—good job kids for hanging in!—we were able to see the vestry in the back of the church.  The vestry’s original painted ceiling survives and is over 500 years old.

Then, Lee arranges for us to get a chance to ring the bells to call people to the next service.  It’s like something from a Disney movie, two ropes disappear into the high ceiling of the cathedral and someone has to yank these ropes up and down to ring the bells.  One rope has three small “subropes” to help people divide up the workload.  The other rope is really a good ab workout.  And you guessed it, some of the kids end up flying up off the ground as they cling to the rope.  The bells are quiet inside the church but we know from hearing them that the bells are calling out to the town. 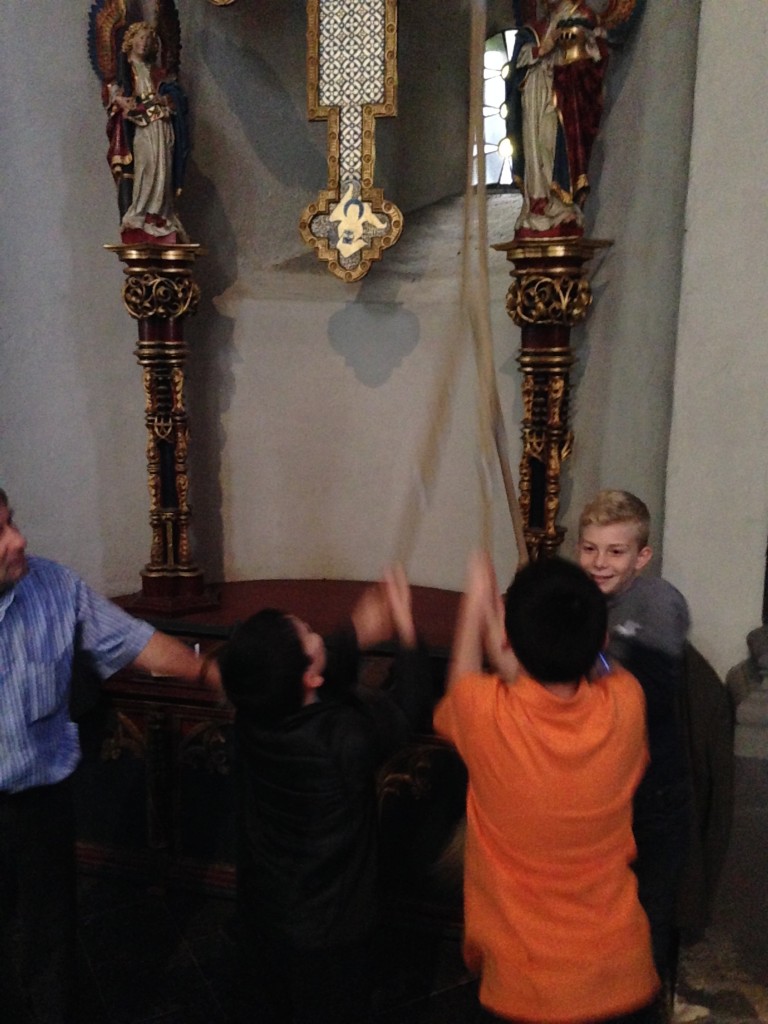 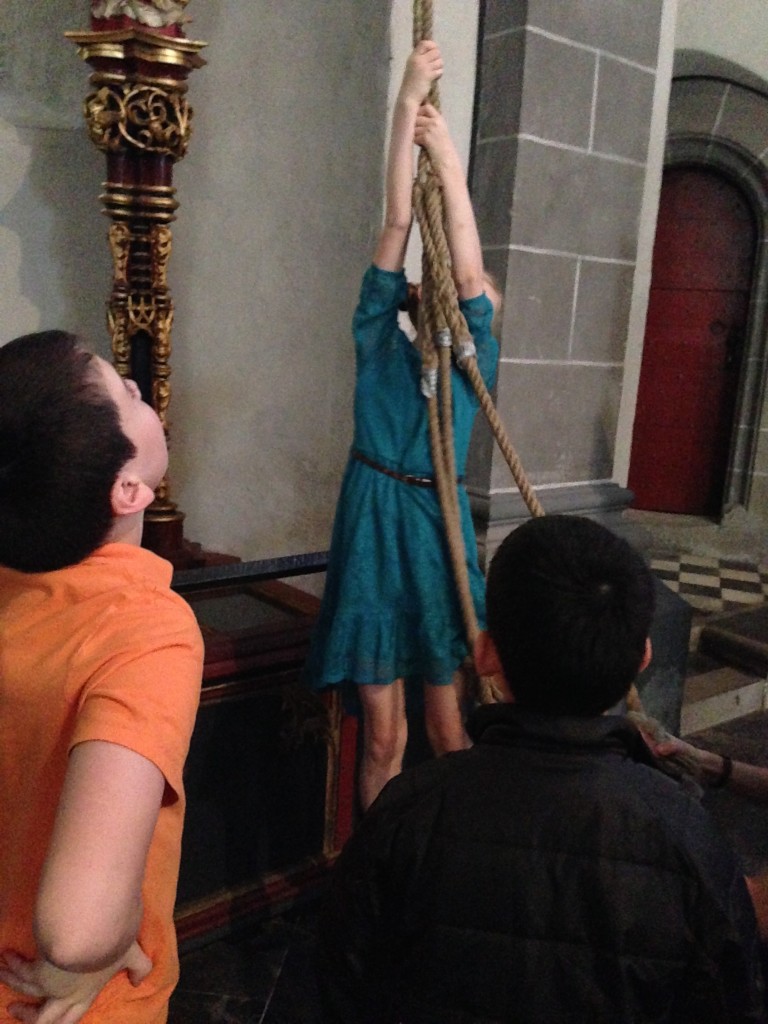 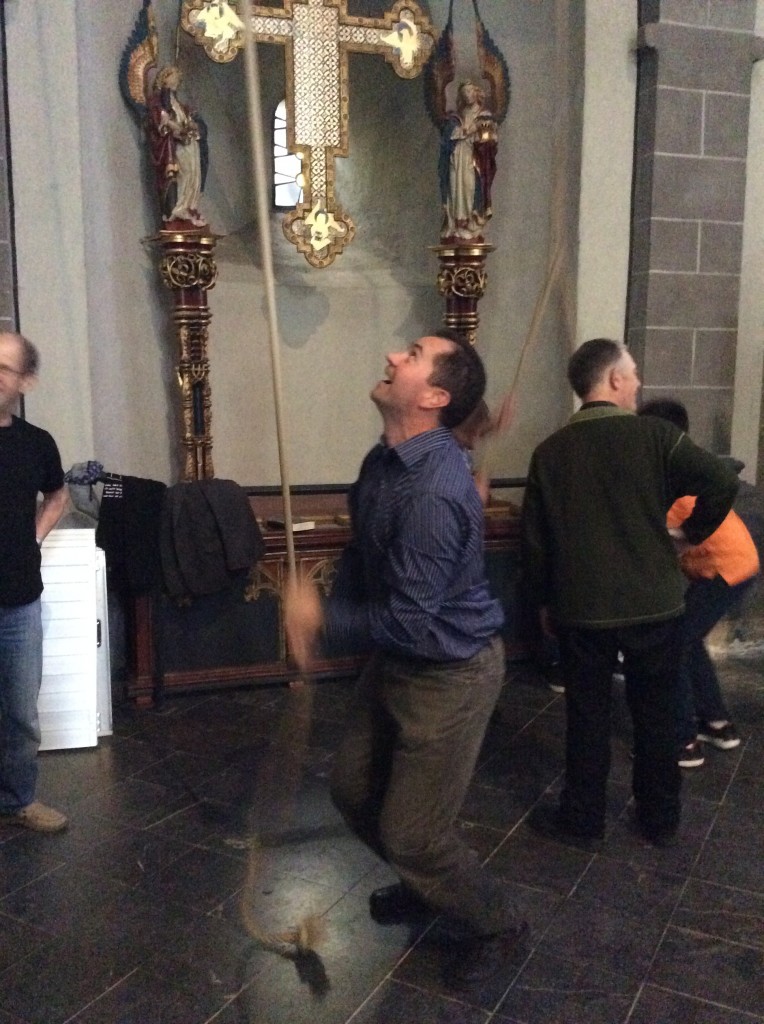 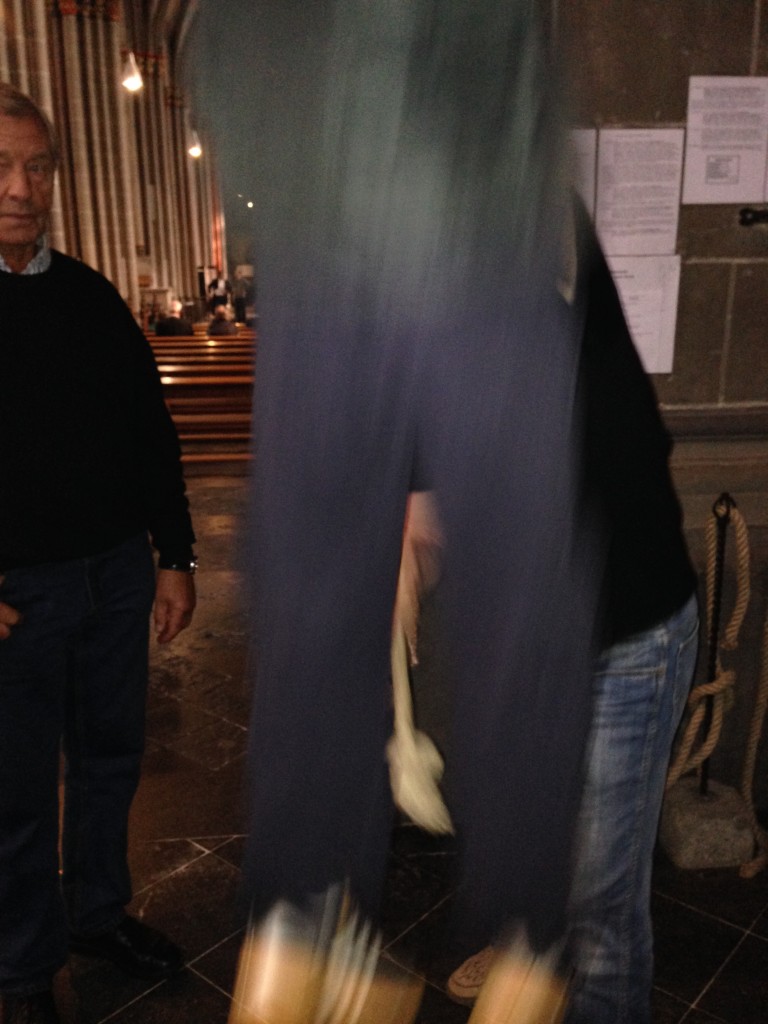 [sorry for the iphone shots, but here’s a kid getting airborne]

We are able to meet the street Pumpenmeister too.  Neighborhoods used to have water pumps where residents would come draw their water. The pumps became social hangouts, akin to office water coolers, over time. After the war, the pumps finally became obsolete as a source of water. The social aspect of the water pump is so important that they still install fake pumps in newer neighborhoods to imitate the old system!

The street Pumpenmeister is a related concept to the Burgermeister or town mayor. The Pumpenmeister is responsible for social coordination on the street.  They organize get togethers and parties. There is a carefully orchestrated care plan for funerals and such that Pumpenmeisters employ. The position rotates along the street with one year terms.  Husband and wife each get separate turns. Now, that’s some thoughtful German organization!

We literally met the Pumpenmeister as she brought around a scroll that served as an invitation to a party.  Lisa and I find we just can’t say the word Pumpenmeister enough.

Another day, we hit the Archaeological Park Xanten.  The Romans were here in Xanten and this park celebrates their memory with a museum and a reproduction of an amphitheater.  They still hold gladiator exhibitions here and a biannual Roman Festival complete with a full pitched Roman camp and martial arts.  For the peeps, it sure doesn’t hurt to have a playground and bouncy dome too! 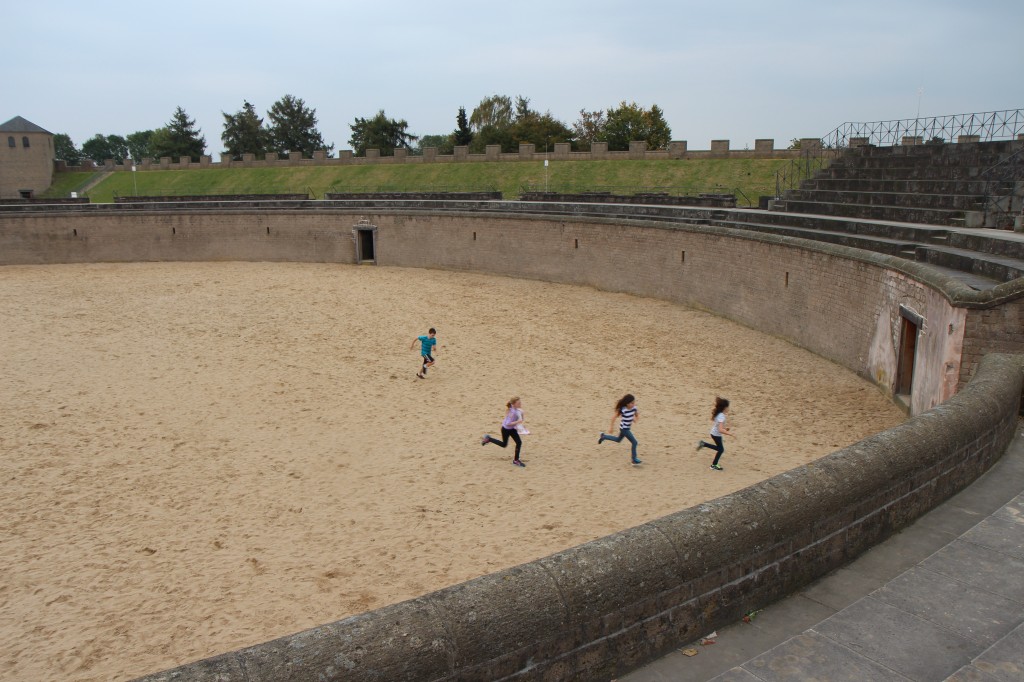 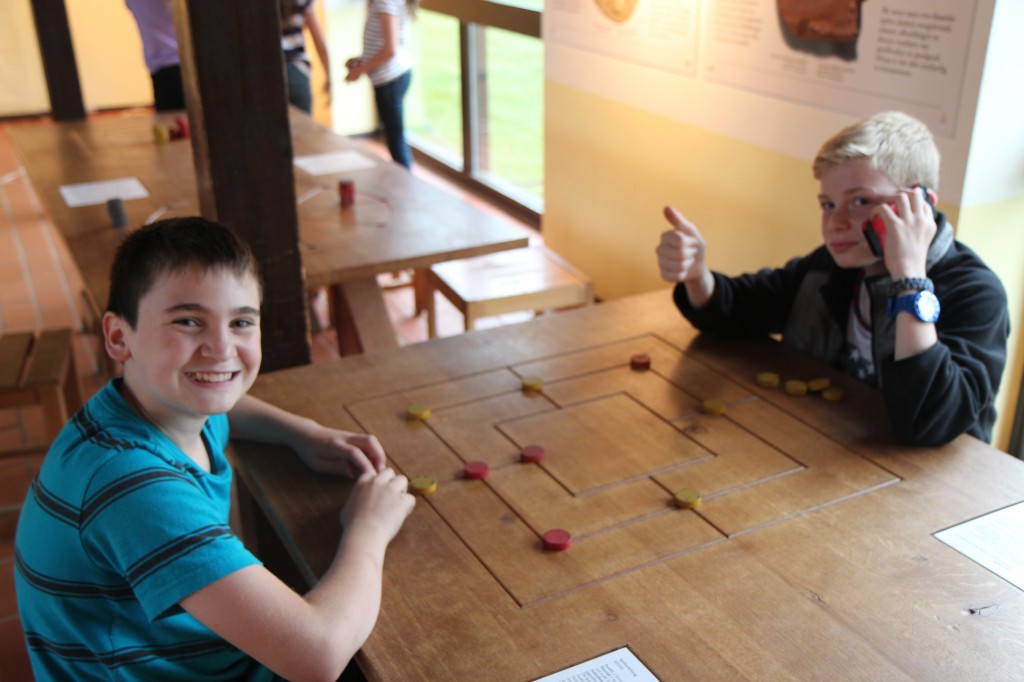 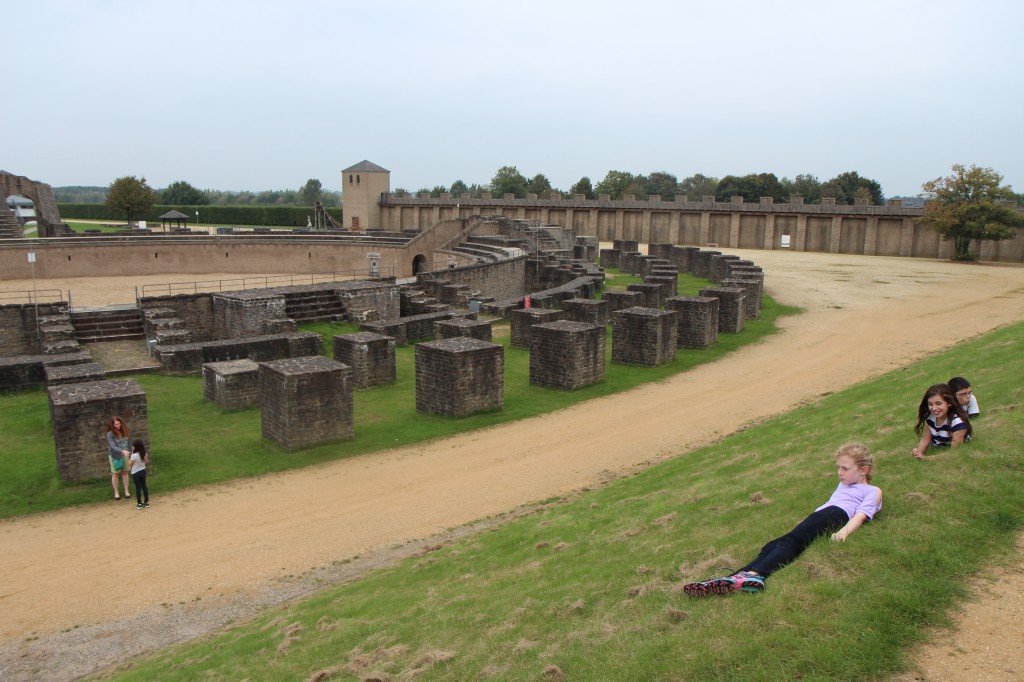 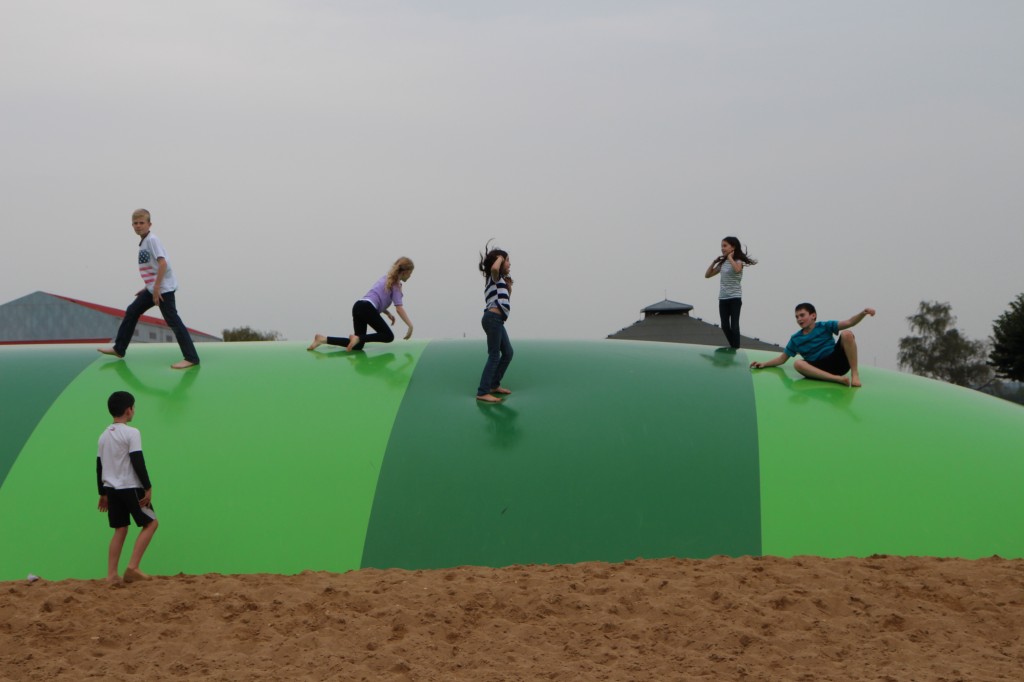 Never enough time with good friends, and our visit was over before we knew it and it was time to go on to London! 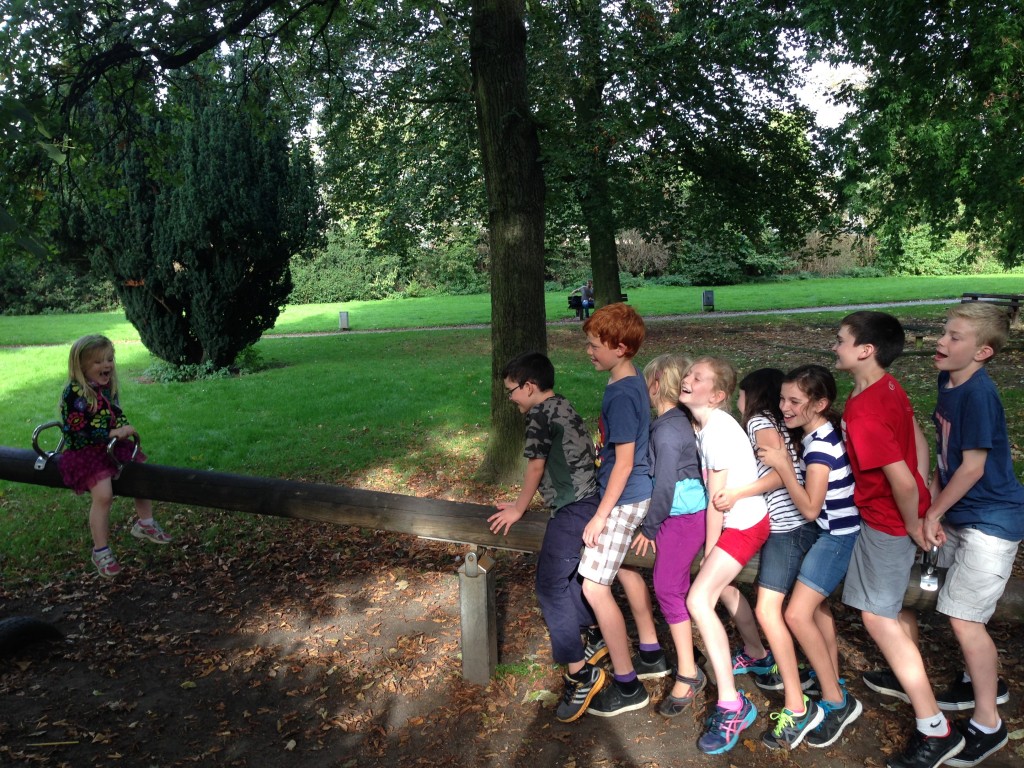 Lee—brave soul—did a masterful job squeezing six Mesquits, six rolling duffels, six backpacks and himself into his Volvo XC90 and we were off to the train station at 0530.  Once there, we waited at the train station with other passengers sneaking sidelong glances at our family and travel baggage in the commuter queue. An announcement was made in German and everyone started scurrying off the platform. Hmmm.  We grabbed our bags and stumbled along after them.  One man stopped to ask Ana if he could help her with her bag up the next flight of stairs.  But the little lady wouldn’t let someone else touch her bag—tough girl.  We’d guessed right, it was just a platform change and we made it in time.  After the car and train ride, we arrived at the airport and took a SkyTrain to get to our terminal.  Next, was an EasyJet flight to London Gatwick.  Europe has a few budget airlines and this was our first flight on one.  They each advertise very low fares, sometimes as low as about $20.  You have to read the fine print because each checked bag is at least $20.  The airline also wants $7 to $12 dollars per seat to pick your seat onboard or wait till 7 days prior and check in for a randomly assigned seat.  RyanAir made headlines a few months back when a person without access to a printer on their vacation showed for their return flight and the airline wanted hundreds of dollars to print out their boarding passes.  The EasyJet seats don’t allow anyone to recline but everything worked out fine.

We landed at Gatwick and found the ticket office for trains.  We make quite a sight all of us with our bags in any given line.  I asked the kids to go wait out of the way and sent them towards an advertising sign.  As I was finishing buying the ticket the sign came crashing down.  A police officer came rushing over to make sure everybody was okay.  Everybody was, since it was a light banner-style sign.  No worries, it’s just us!

The kids were understandably tired after about 8 hours of travel and an early wakeup.  We took a snack break in the terminal.  Then, a train to Clapham Junction where we transferred to another to arrive at Wimbledon Station.

I began to hear, “Daddy, when we get there, is it a long walk to the apartment?”

It wasn’t long at all and we were glad to find our place not far from the tube station.  A few hours later and I was able to go meet my mother as she flew in to Gatwick to join us.  What a great memory for us and we couldn’t wait to get out and see more of London! 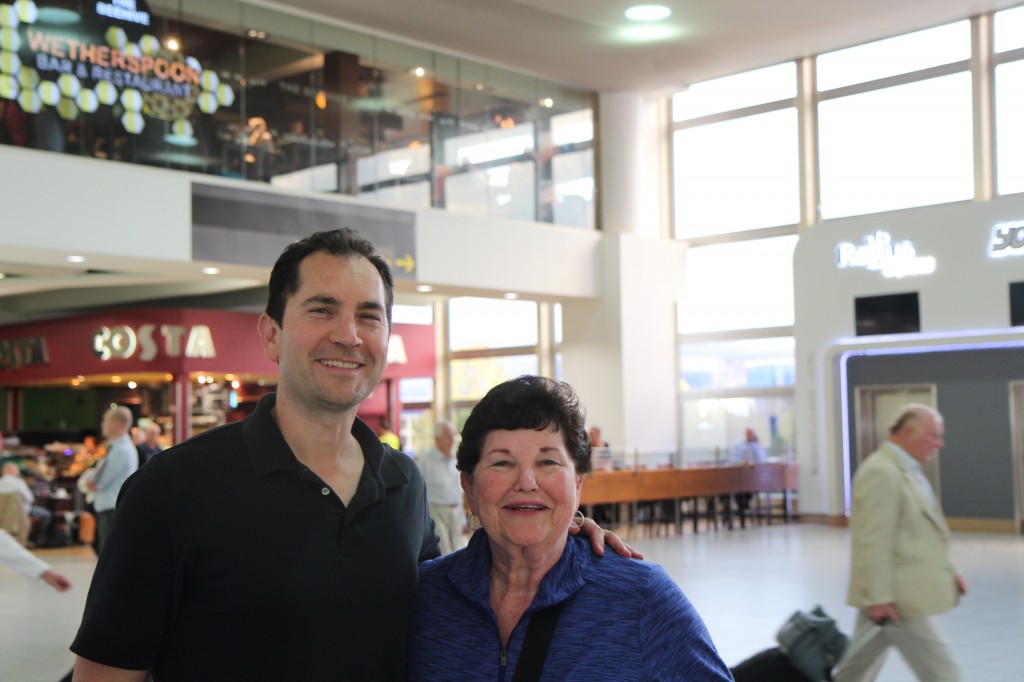 4 thoughts on “Xanten, “Earland” and the beauty of the Pumpenmeister”