My sincere apologies dear readers for the huge gap in blog updates.  We had a sickness go through the family and I was under the weather for some time.  Seems like sicknesses pack more of a wallop than they used to for me.  But I am back up to writing speed. Thank you so much for taking the time to see what we are up to!

I’ve visited London a few times during my military career, including day trips during a month-long “deployment” to Mildenhall Air Base 90 minutes outside of London.  I have to call that a deployment in quotes because all of us in (or recently in) the military have learned since 9/11 such good deal deployments have largely gone the way of the dodo.

London’s a great walking city and easy to access through the public transportation system.  With my limited experience, my favorite walk in the city center goes from Trafalgar Square and its environs, past No. 10 Downing Street, down to Buckingham Palace via Parliament and the impressive Westminster Abbey.  Of course, to dive into these places would take a few days, especially with our little legs and smaller attention spans.  We end up doing just that, and here’s the result.

Trafalgar Square js one of my earliest Europe memories from years ago.  It must have been an organized trip from Mildenhall Air Base in England because I recall this huge column filling my bus window flanked by lions and towering above a square full of people and pigeons.  Once we parked, I remember that I had to get back there and see all that commotion. 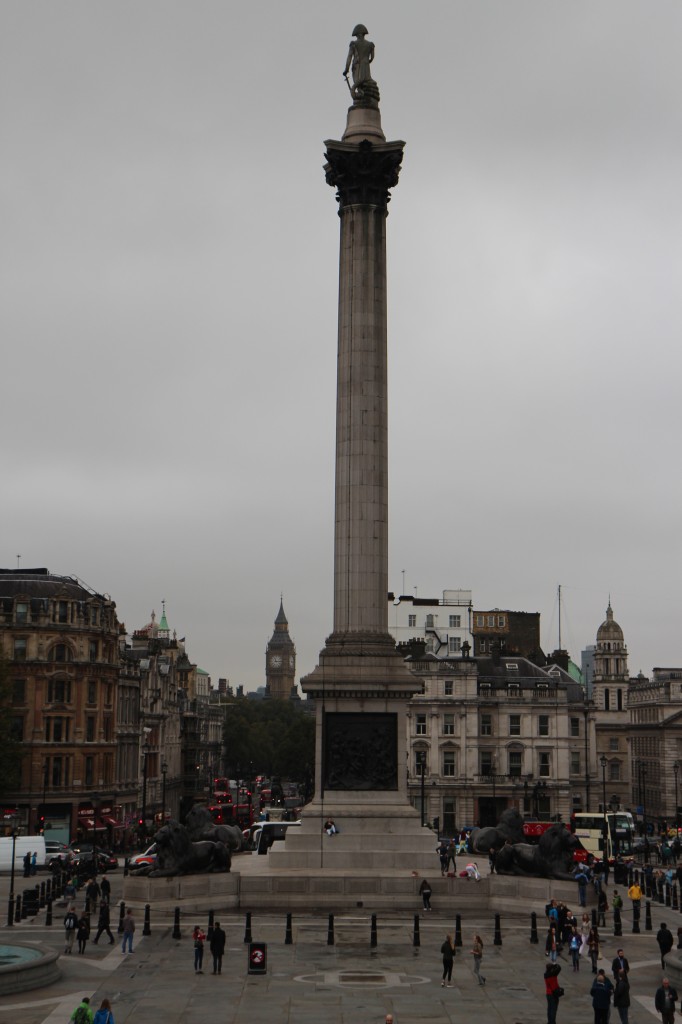 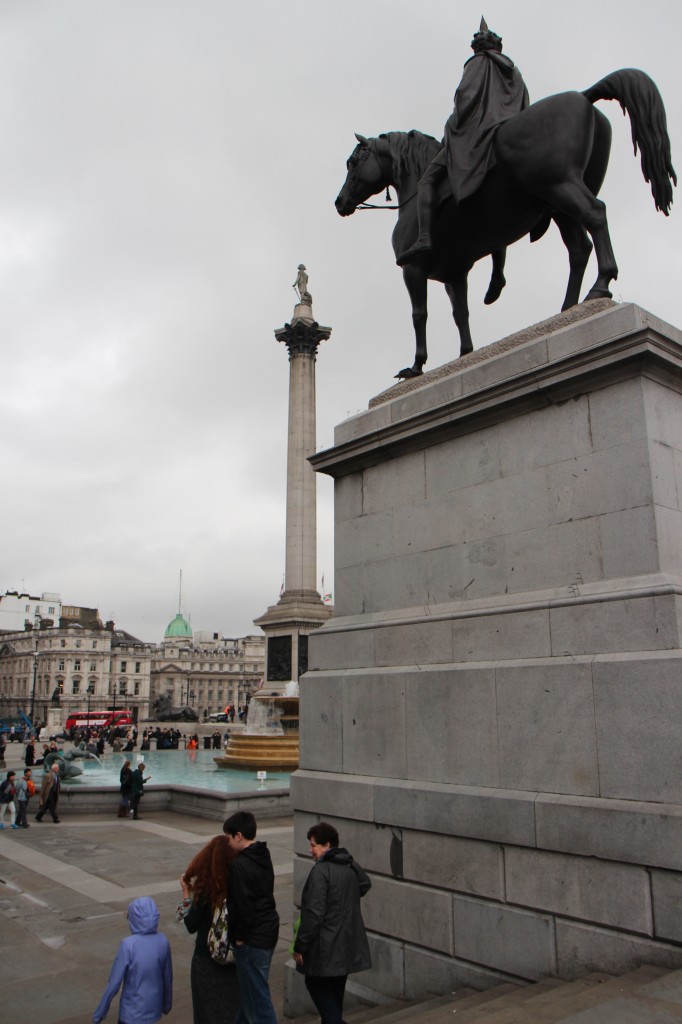 Atop the 170-foot tall column stands Admiral Horatio Nelson, aka Lord Nelson.  His leadership and actions at sea helped keep the British free of Napoleon’s clutches.  Admiral Nelson went to sea as a 12 year old midshipman his uncle’s ship.  By age 22, he was captain of his own ship and distinguished himself at the Battle of Cape St. Vincent.  The Brits routed the French that day but Captain Nelson was wounded and lost an arm.  At the Battle of Trafalgar in 1805, the 33-vessel French and Spanish fleet threatened British control of the seas and engaged Nelson’s fleet in another naval battle of the Napoleonic Wars.  As Captain Nelson led the 27 vessels of the British fleet into combat his flagship hoisted signal flags for all the fleet to see—“England expects that every man will do his duty.”  Nelson defied naval orthodoxy of the day and instead split his force into two and attacked the larger enemy force via two perpendicular columns.  England prevailed and Napoleon could no longer challenge the British at sea.  Admiral Nelson lost his life after a French sharpshooter sent a fatal ball through his shoulder and into his back.  His body was put into a barrel of rum for the sail home and he was returned to a hero’s funeral at St Paul’s cathedral.  This most famous of British war heroes now stands atop that column in an 18 foot tall statue facing parliament.  To quote Cliff Claven, it’s a little known fact that if Hitler had succeeded in capturing London, he’d planned to remove Nelson’s column to Berlin. 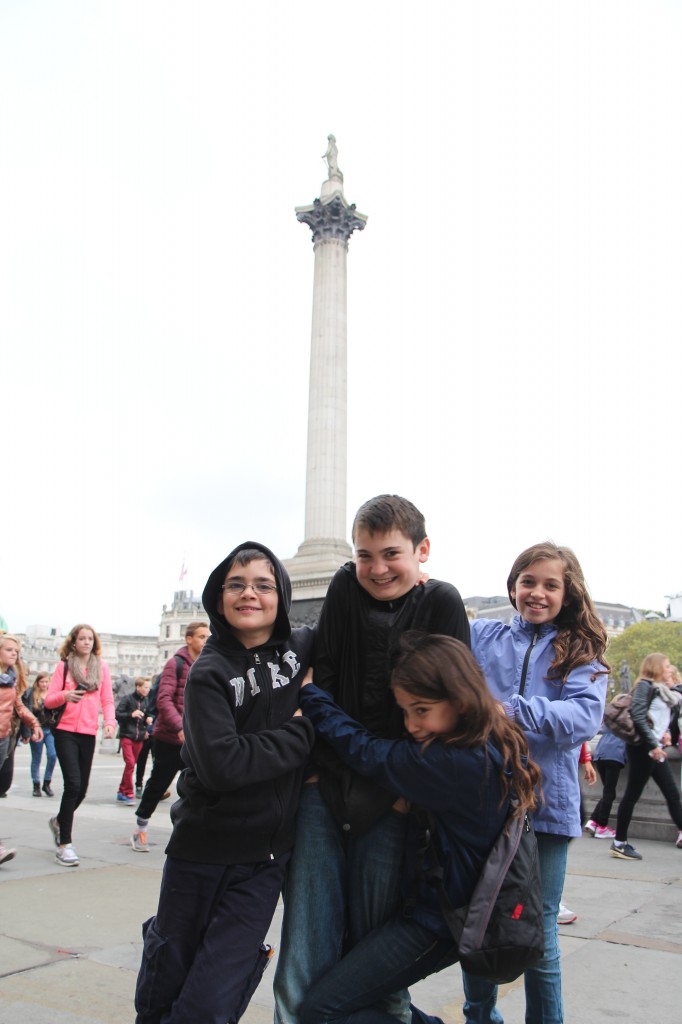 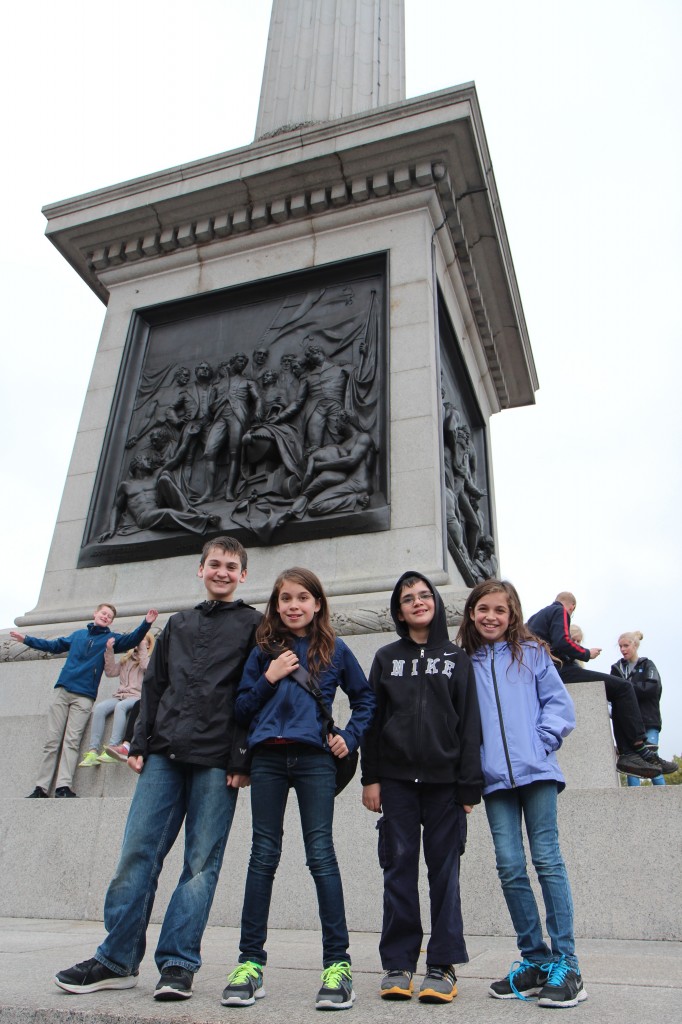 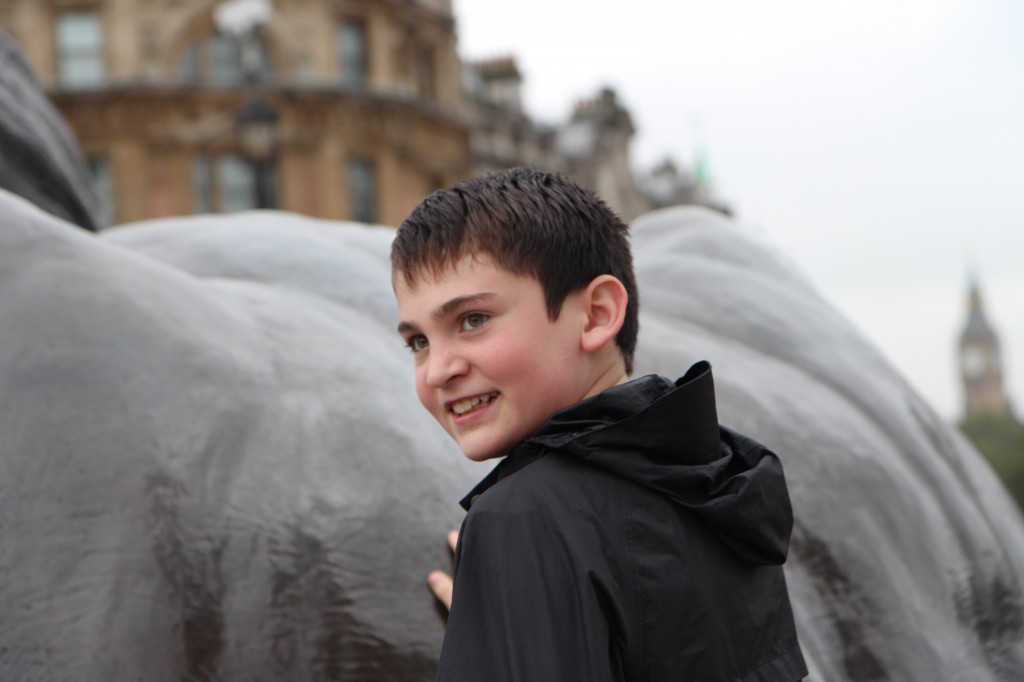 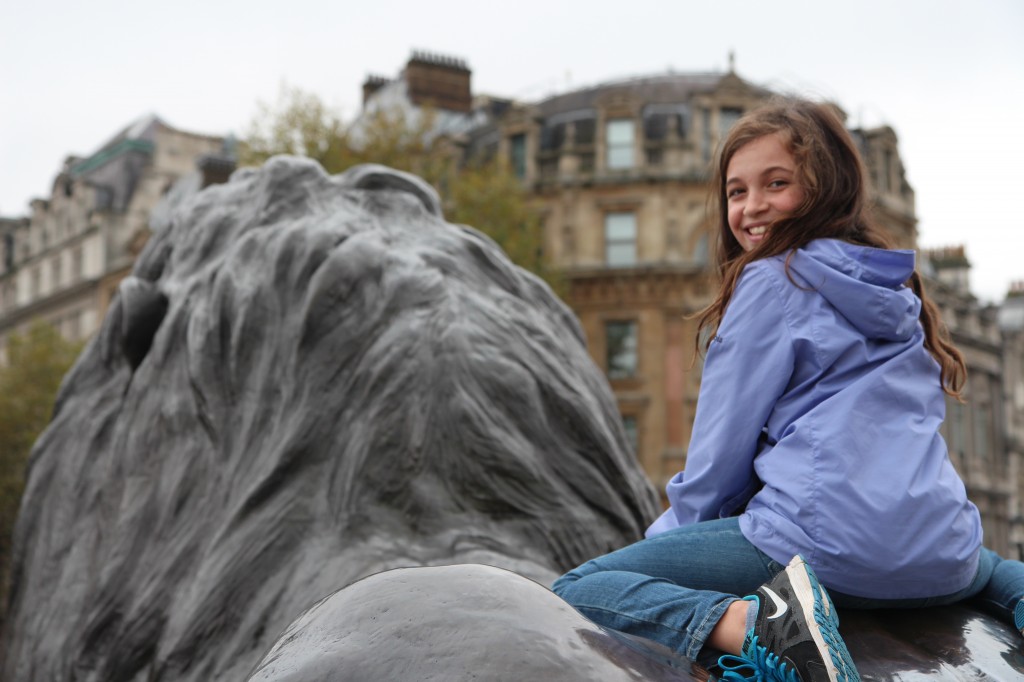 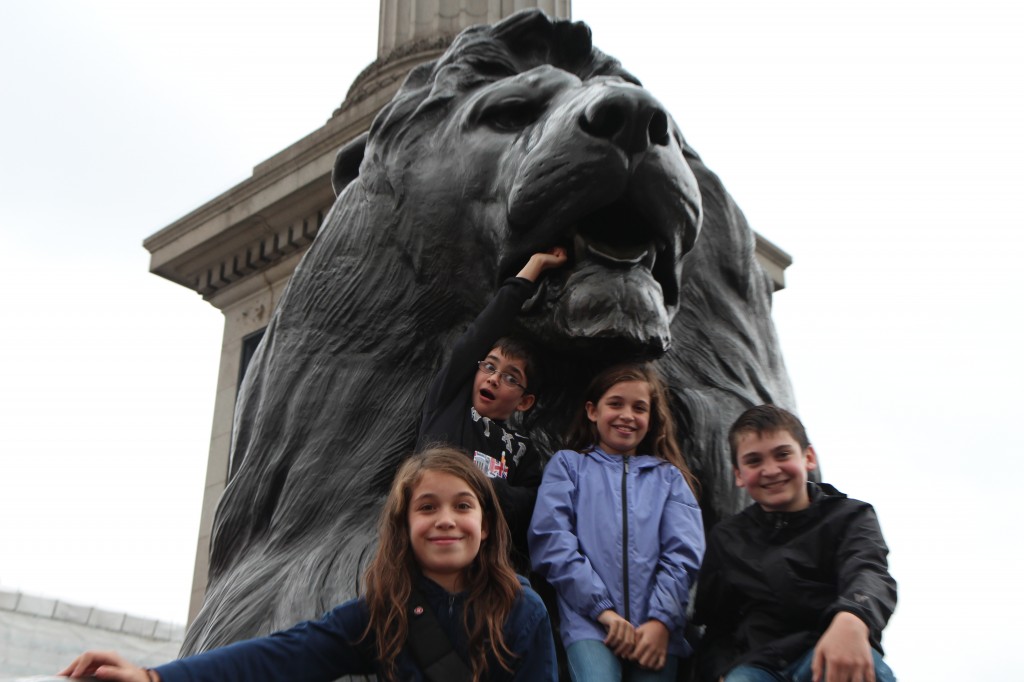 Also in Trafalgar Square, we find the church of St Martin in the Fields. 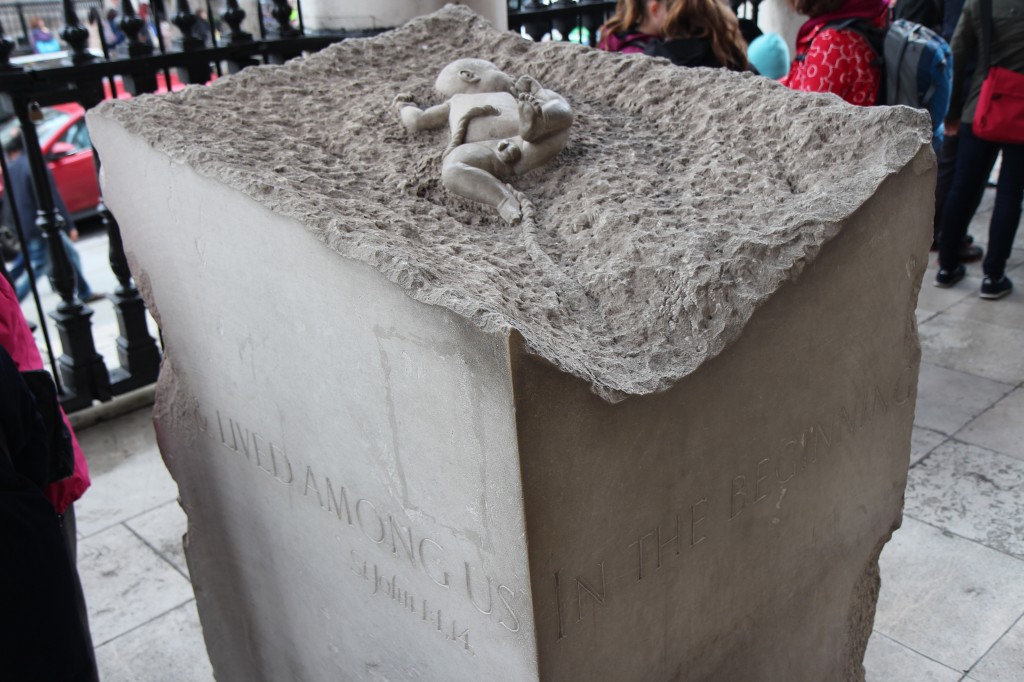 Beneath the church, the Cafe in the Crypt offers good food and that kinda-creepy ambiance that 12 year olds love.  This church has a tradition of inexpensive musical performances and for service within the city.  On a trip to London years ago, we enjoyed a wonderful, midday string quartet concert.  On this day, we are off down Whitehall after the cafe meal. 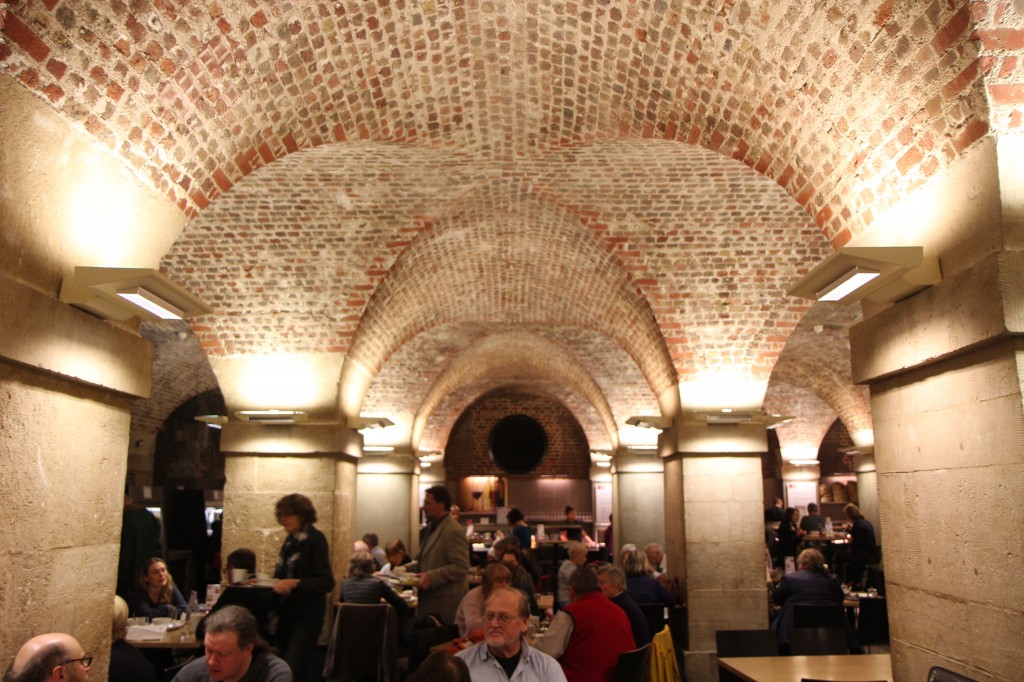 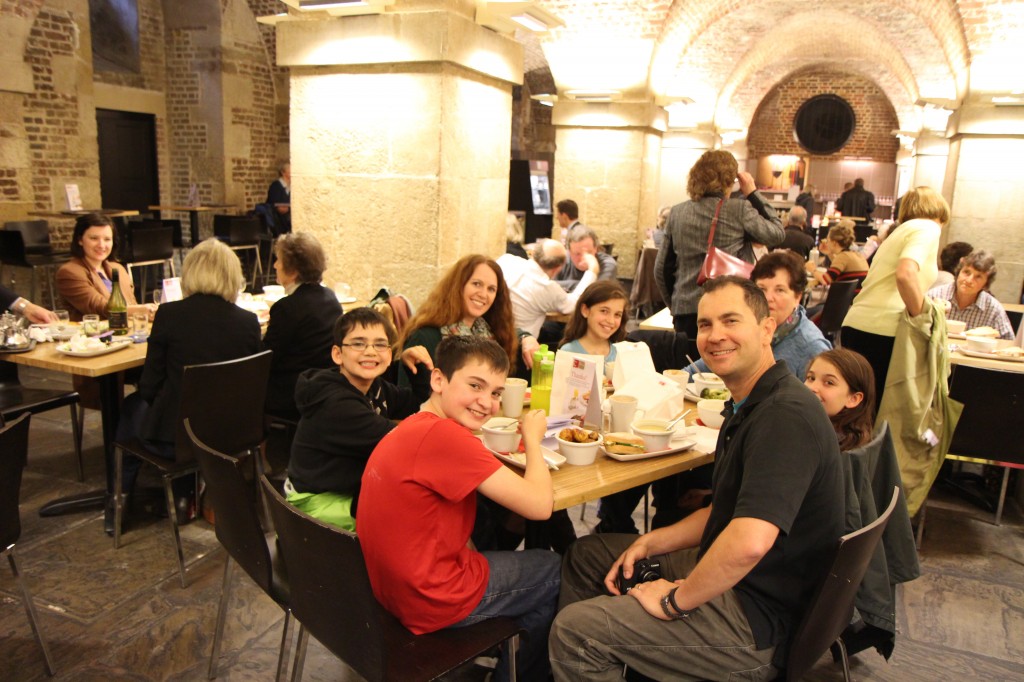 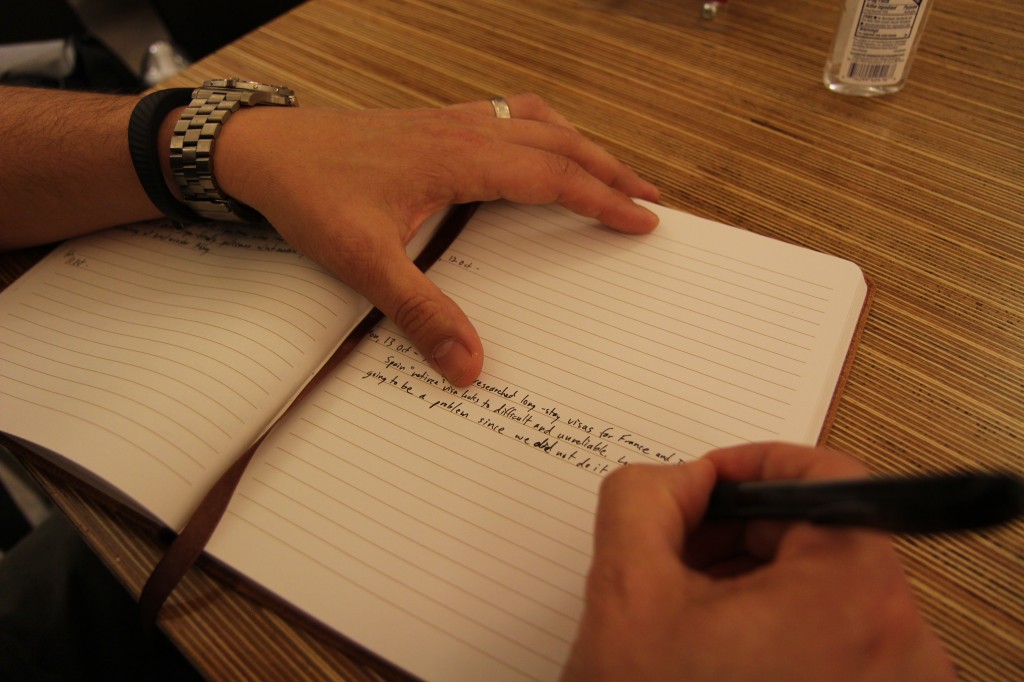 Also on Trafalgar Square, the exquisite National Gallery peers up at Nelson’s column.  The National Gallery displays many of the portraits of English royalty but we are far more interested in Joseph Turner’s depictions of nautical scenes.  ‘The Fighting Temeraire tugged to her Last Berth to be broken up” shows the end of an era as a fighting tall ship is led away by a steam powered tug before a  setting sun.  Apt nautical history for the seafaring British Empire. The kids sit and sketch their favorites.  Anything involving horses just leap out at our girls. 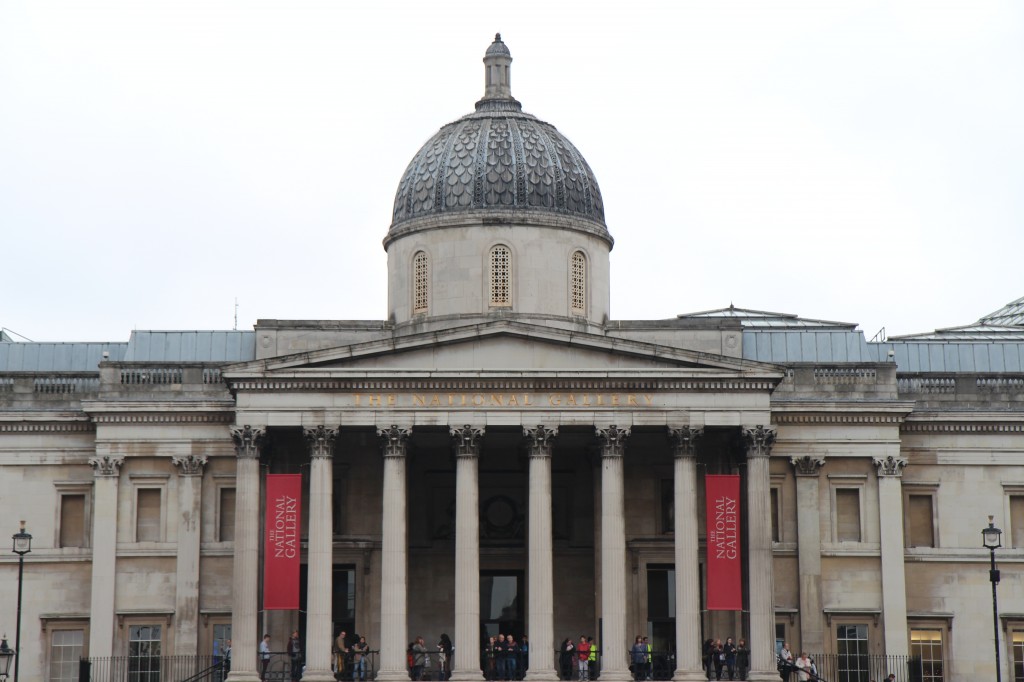 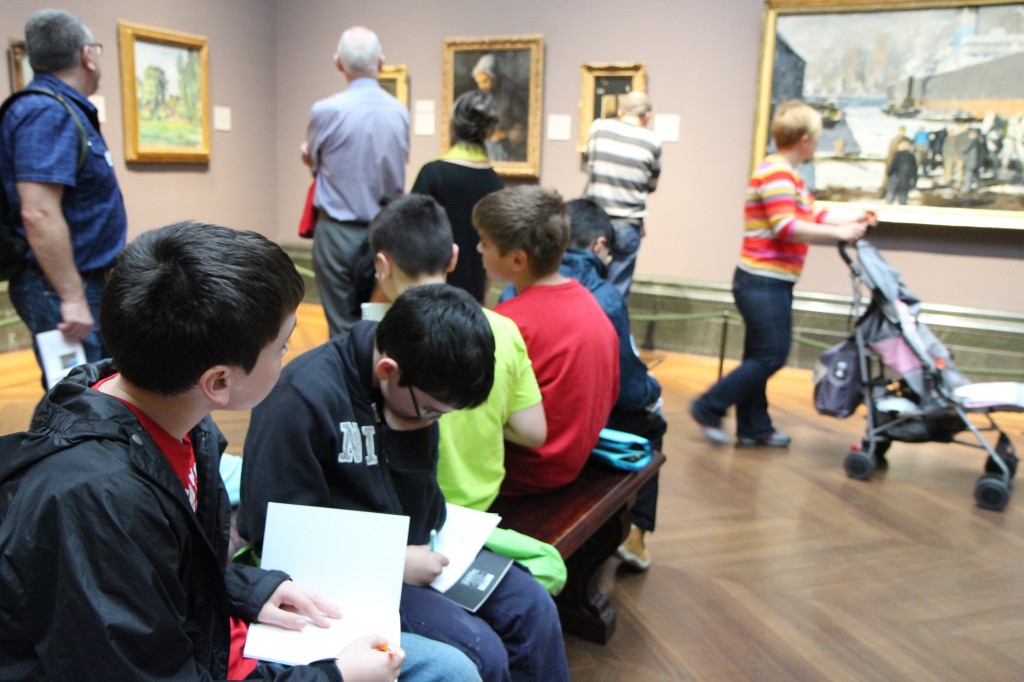 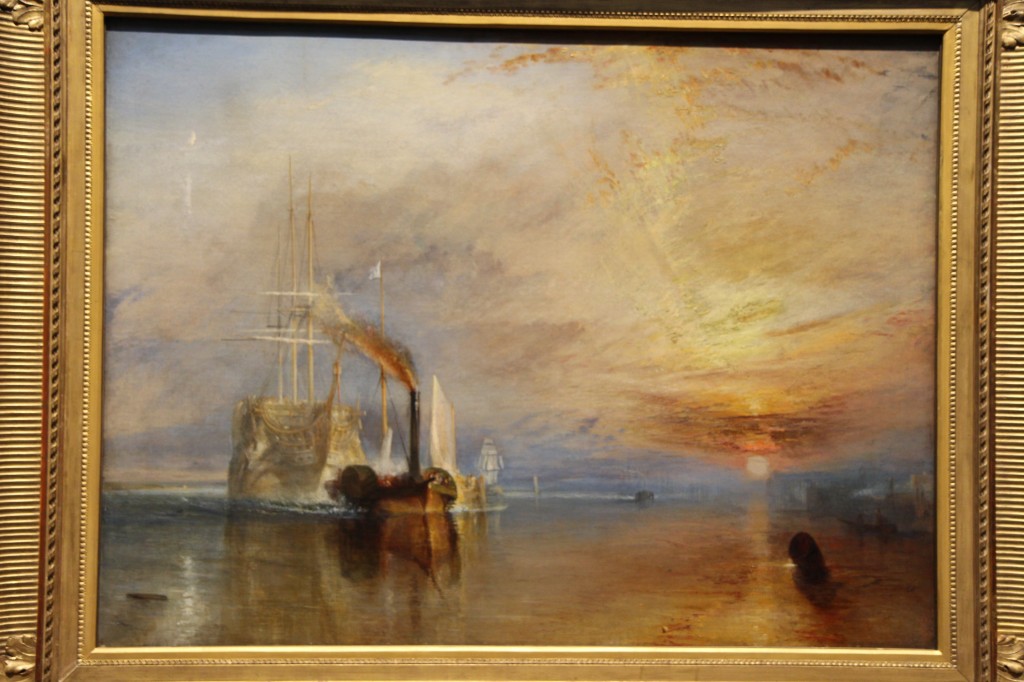 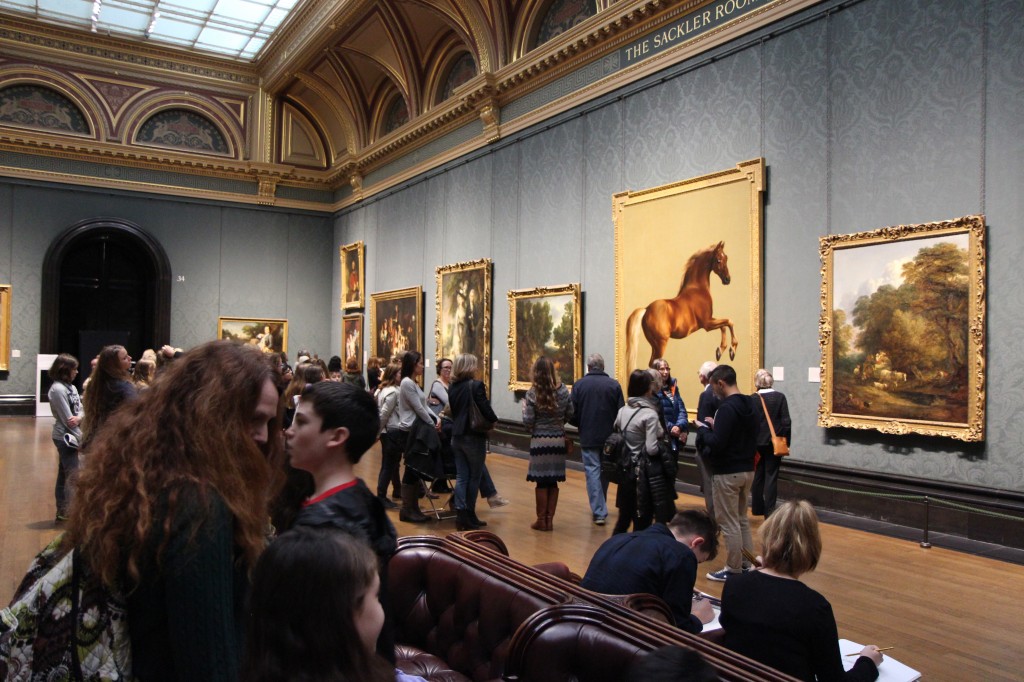 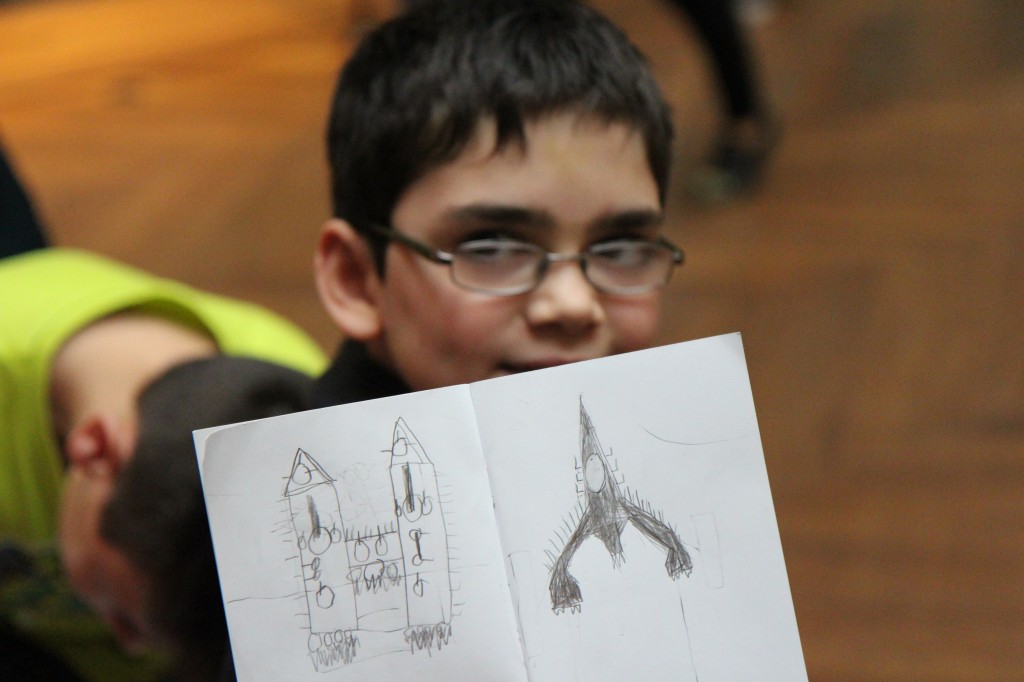 What is this statue of George Washington doing in front of the National Gallery in London?  In 1921, the state of Virginia sent a replica of a statue.  The City of London put it in Trafalgar Square, one of the city’s most popular tourist attractions.

But George Washington had publicly stated he would never set foot on English soil. Erecting a statue of him on English soil would’ve violated Washington’s desires.  Instead, Virginia sent a bunch of American soil with the statue.  The ‘English’ soil was replaced with this ‘American’ soil, and Washington’s statue placed atop a bit of Virginia in London… 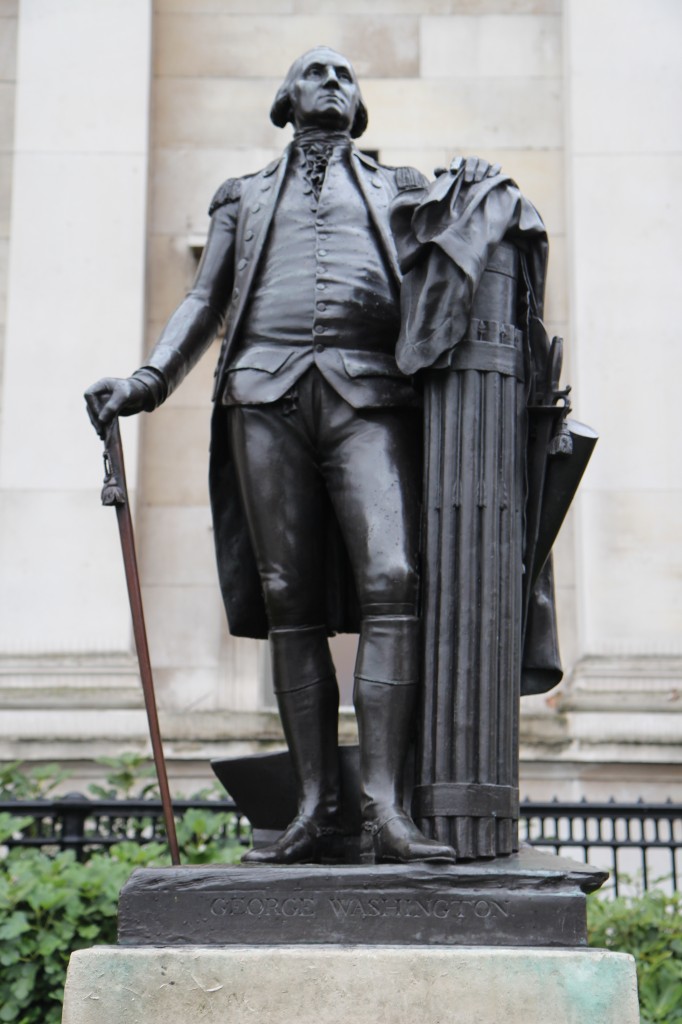 Whitehall also figures prominently in one of the Harry Potter films.  It’s the street of stately white buildings that hides the entrance to the Ministry of Magic.

Walking south down Whitehall, we pass police officers and the famous horse guards. 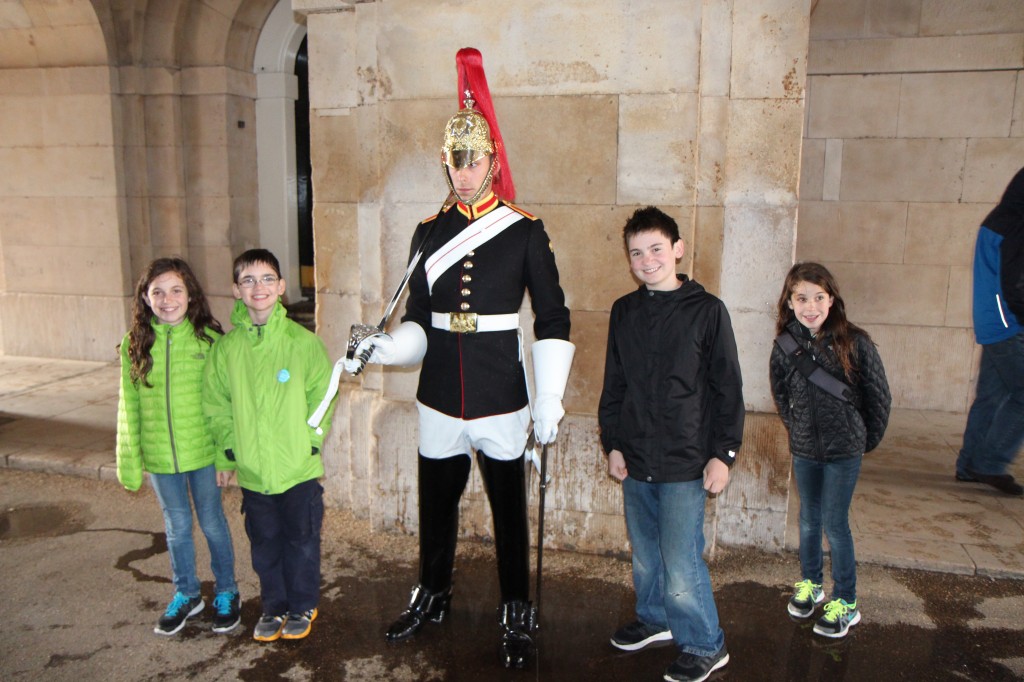 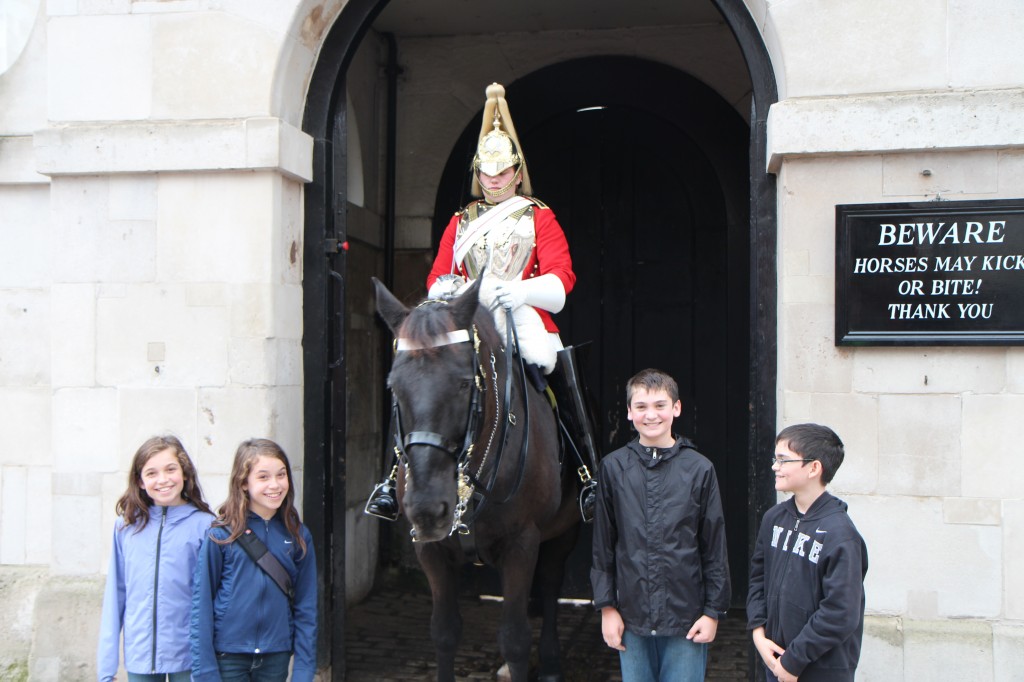 A tall, friendly police officer with a submachine gun chats with us for a while.  He confides with us how the officers all get very tired of posing for pictures with the tourists. Then, a couple of officers come walking by and he grabs them, “hey guys, this family really needs to get a picture with you!”  We hadn’t asked for any pictures and all concerned got a great laugh as the first officer made a quick getaway. 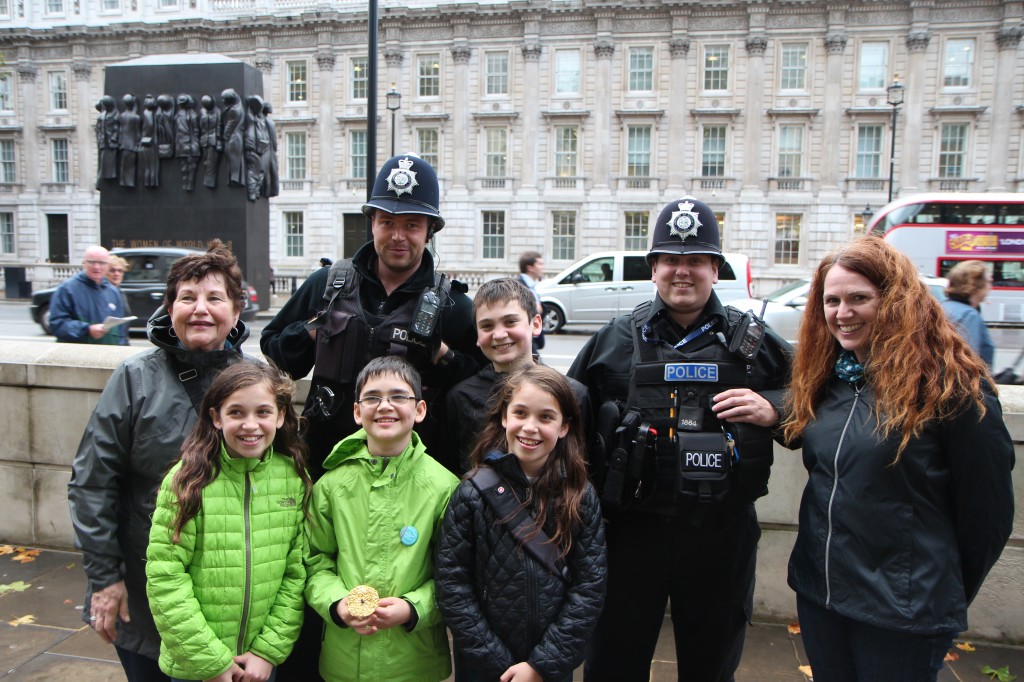 One person gets too annoying with the horse and the mounted guard suddenly draws the first inches of his sword as a warning.  Everything stops right away.  There’s something to the height and stature of a mounted soldier.  It’s no wonder just about every nation was slow to abandon its glorious cavalry.

Down the street, we find ourselves surrounded by more police officers guarding No. 10 Downing Street.  The British Prime Minister’s residence is safely ensconced behind a huge iron portal.  Across Whitehall Rd a large group is holding a loud protest complete with drums for effect. 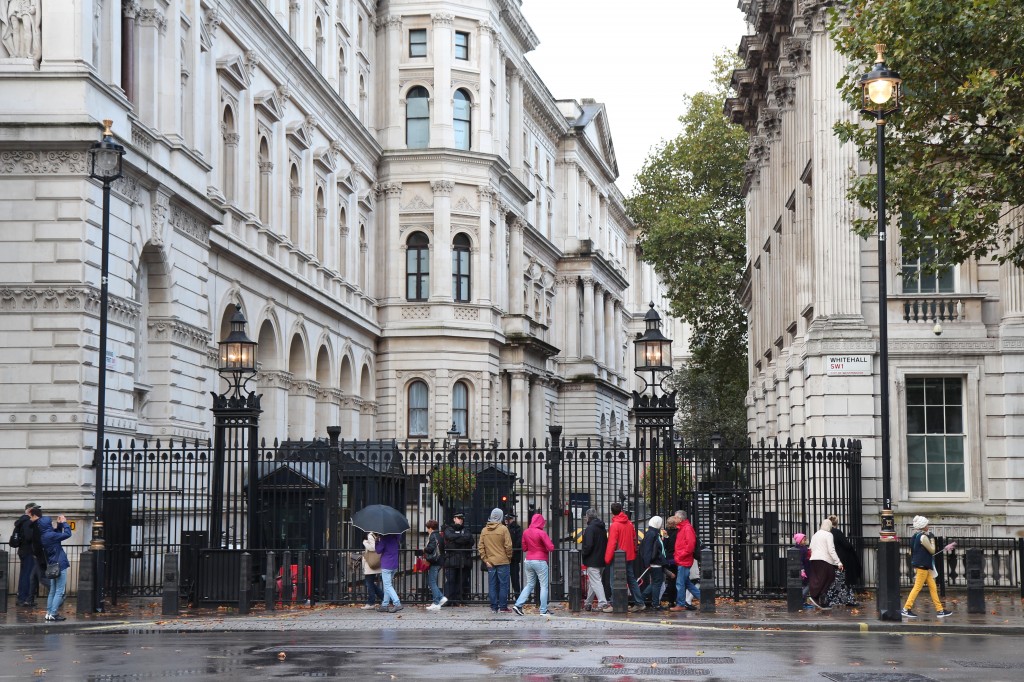 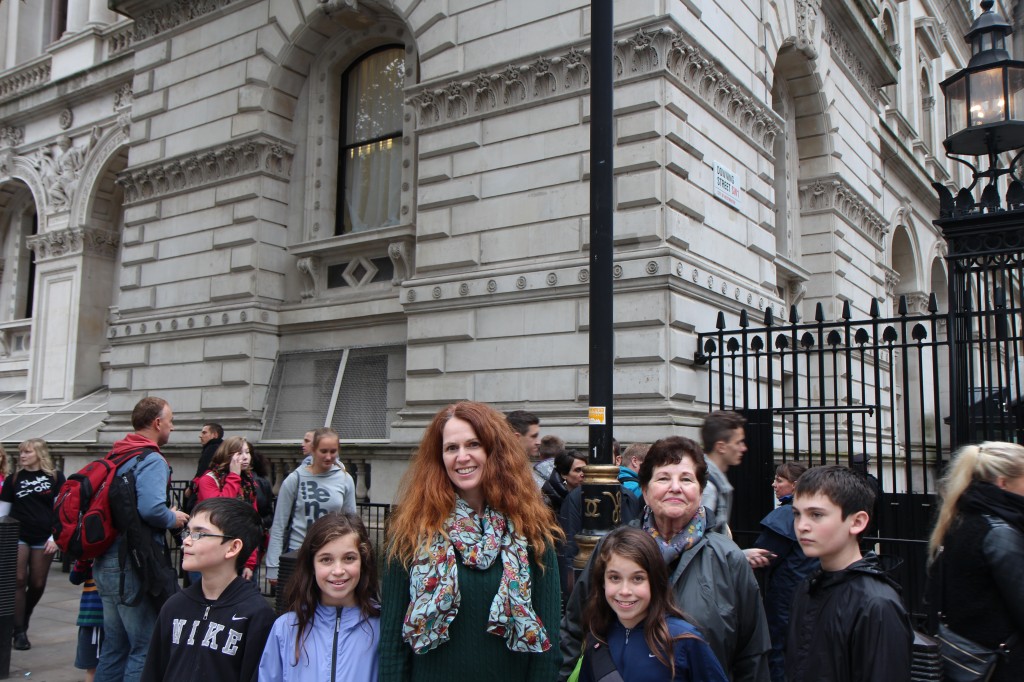 Riding on the tube later, one of the kids asks Lisa who David Cameron is.  Now, the tube is pretty quiet even when it’s packed with Londoners.  No one talks.  Lisa thinks about it a moment and responds that he is the director of big-budget movies like the Titanic.  It’s crowded at rush hour so I’m about ten people away.  She raises her voice to ask me who David Cameron is.  I know she’s thinking of James Cameron and I answer as quietly as I can manage that David Cameron’s the Prime Minister.  Lisa laughs like crazy and I can see the commuter next to her trying to stifle a smile.

Argh, I should have blurted out, “Yeah, we Canadians should really pay more attention to British politics.”

We’ve been working on our national camouflage plan in order to protect the US.  We figure if we embarrass ourselves in a country of a foreign language we can just blurt out “Par-doan” in a French accent.  And if it’s in an English speaking country I’ll just pull off the subdued velcro patch on my backpack to reveal my Maple Leaf Canadian flag!

[walk to be continued!]

9 thoughts on “The London walk I love”