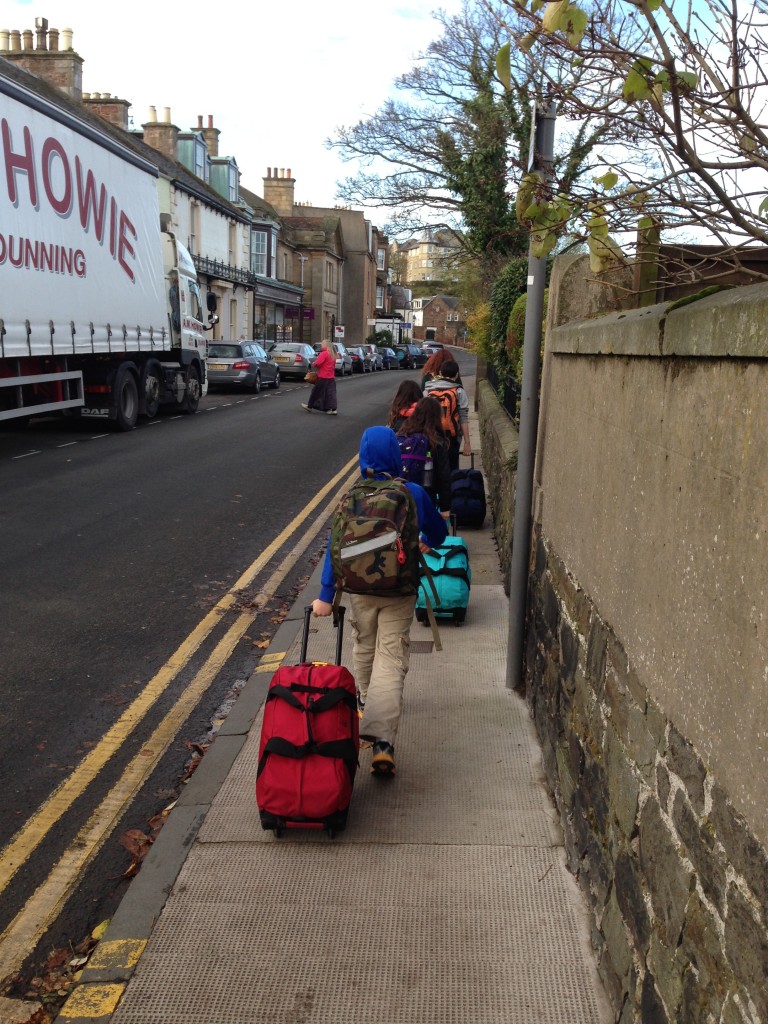 Rolling the bags out of North Berwick, I ran back to drop off the key after finding it hiding in my front pocket.  Later, I wondered if it was a subconscious desire to hold onto that place.  It felt like people were almost waving goodbye to us as we lugged our bags to the train station.  North Berwick, and its people—even Scotland itself—got under our skin.  We were sad to leave, but excited about the Emerald Isle on the horizon.

We took our familiar train to Edinburgh then a short Ryan Air flight to Dublin.  Who’s afraid of a little discount airline?  Who needs seatback pockets or seats that recline? 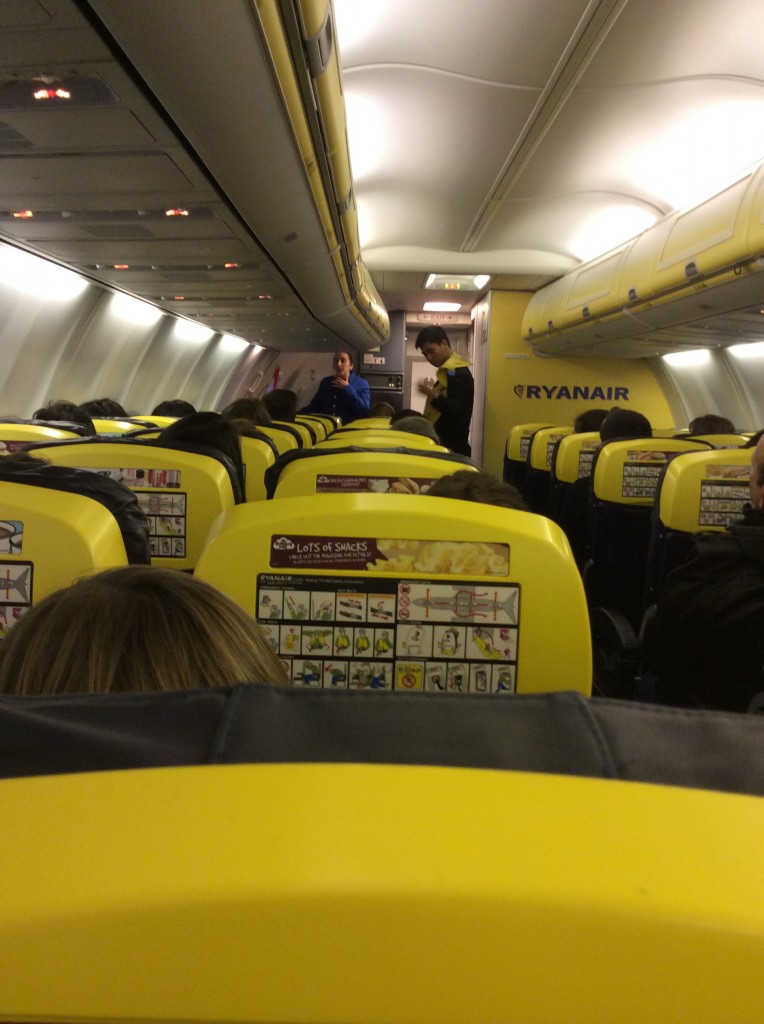 Not us, though we’ve certainly learned about the tighter baggage policies of European airlines.  Most of the tickets have a limit of 15 kg (~33 lbs) of checked bag per ticket so our family can pool together our 90 kg for all our bags. We write down our weights each time so we can keep track of how close we are. The flight weight limits help us be mindful of the weights of anything we might pick up (read “books”). It’s a microcosm of moving every few years in the military.  You only get a certain weight allowance and if you have enough kids and live in a house you are bound to be thinking about the weight of the things you accumulate.

Onboard the flight, the airline has transformed the flight attendants into a retail sales force. They announce a ticket sale then go down the aisle selling scratch-off “lottery” tickets to benefit charity.  I’m not sure how much of the funds go to charity but it seems a strange place to get all the details.  Hmmm, better just keep reading my book and avoid eye contact.

The flight attendants also push another cart along to sell duty-free perfumes and colognes. I think alcohol too.  I must be missing the boat here, I don’t seem to get on an airplane intending to stock up on perfume.  I’m about as likely to buy a puppy onboard.  Come to think about it, that would bring a lot more smiles to passengers’ faces. You can almost see the airline promotion now, “Come fly the tail-waggin’ skies with us. If you win the musical chairs event, you could take home a new family member!”

What about selling those travel-size toiletries after security just confiscated your wee-bit-too-large bottle of whatever?  Or that souvenir from that location that you just departed and never had time to get?  Or a travel electrical adaptor since you probably forgot one of yours at home?  Or a map of the upcoming city or the airport terminal so you can find the Cinnabon, the bookstore, the Jamba Juice and the Starbucks and still make your connection in 15 minutes? Or maybe the cologne actually is a good idea for the stinky passenger two rows up.  Maybe that’s why the family behind us sent me the box of cologne? (just kidding)

To keep costs down, RyanAir utilizes lower-cost airports about an hour or two outside of the city.  So you get to hang out at understandably, less well-known places like Rome’s Ciampino and Paris’ Beauvais airport.  But we love those low fares! And the pace of the smaller airports seems a good fit for the small people with us, as well. We’re finding RyanAir short-haul flights for $30-40 a seat including bags and that really helps balance the ice cream part of the budget.

We arrived into Dublin late and knowing it would be too far to make it to southwest Ireland (include a map) we stayed at an airport hotel on the outskirts of Dublin.

We grabbed a Subway sandwich for the first time since leaving the States and enjoyed the lady’s accent behind the counter.  She was Latvian.  Our hotel desk workers were Polish and as we talked to more of the folks and read a bit we learned that Ireland’s second most spoken language is not Gaelic as I would have guessed.  It’s Polish.

The Celtic Tiger years of 1995-2000 drew people from all over, especially those from Central/Eastern Europe seeking better opportunities.  On this planet, economics affects about everything, doesn’t it?  During the Celtic Tiger years, Ireland was booming and the economy averaged over 9% growth a year.  From what we read, the Irish, being accustomed to sending emigrants abroad for good jobs now were surprised to find immigrants arriving on their shores and into their economy.  Things began to pull back in 2001 with GDP growth averaging about 5% for the next six years.

Then the global crisis struck, popped their property price bubble, and much has slowed down here in Ireland and across Europe, really.  We keep hearing different perspectives on this story from people all over Europe. 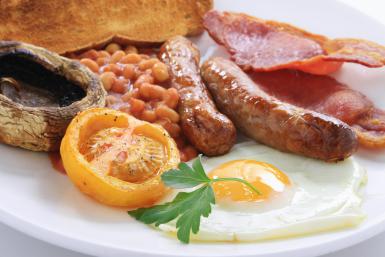 However, the next morning we enjoy some of the “full English” breakfast at the hotel.  Now, that’s a breakfast!  For those that aren’t familiar a traditional full English breakfast includes bacon (traditionally back bacon), poached or fried eggs, fried or grilled tomatoes, fried mushrooms, fried bread or toast with butter, sausages and baked beans, usually served with a mug of tea. As nearly everything is fried in this meal, it is commonly called a “fry-up”.  Local variations include the Irish substituting soda bread, the Scots occasionally throwing in tattie scones, haggis and black pudding.

Then it’s off on the train from Dublin to get to Killarney. 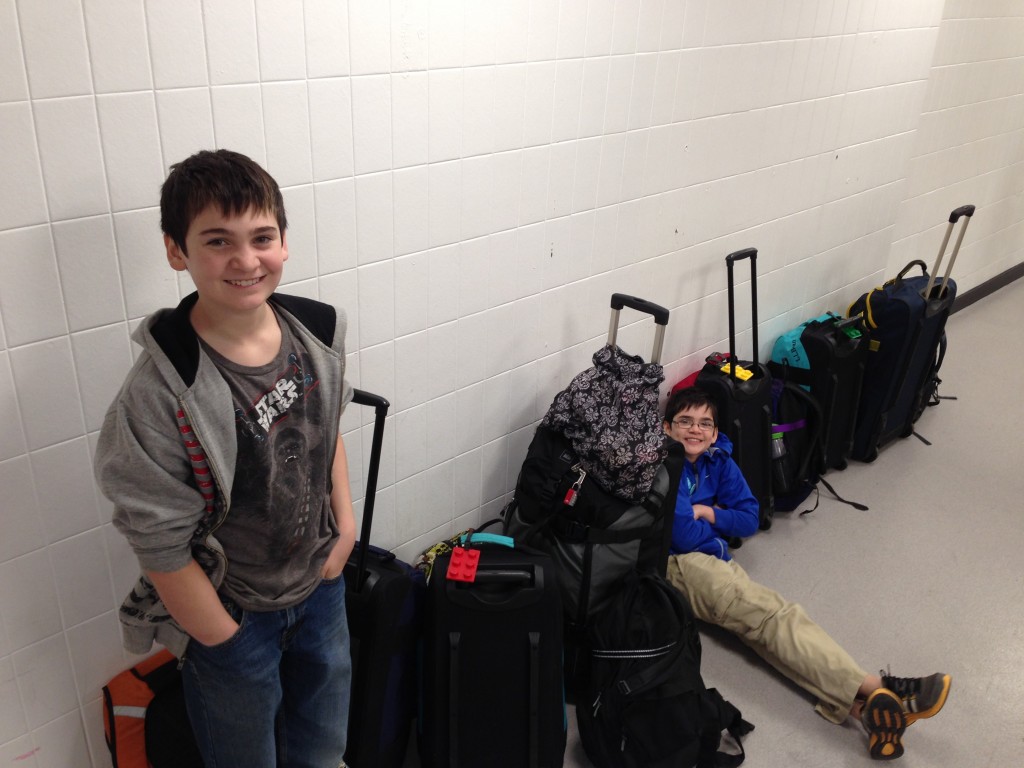 Sitting in our seats preparing to leave the station, we were beginning to get used to the idea of convenient Euro train travel from city center to city center without checking in 2 hours prior at an airport or dealing with traffic.  A father and son, who looked like they might have been slightly small ex-Notre Dame football players, walked up to our seats.  The Dad quickly pointed out we were in their seats.  Lisa and I did not know what he was talking about since we’d purchased “coach” style seats on trains now for two whole legs—we were experts.  Then, he pointed to the “wall” of the train and sure enough, there was a tiny LCD set of names.  The letters were no more than 3 cm high.  We moved over and they settled in.  They’d been in Dublin for the big rugby match and were returning to Cork.  The father spent much of the trip attempting to convince his teenage son of the merits of medical school. 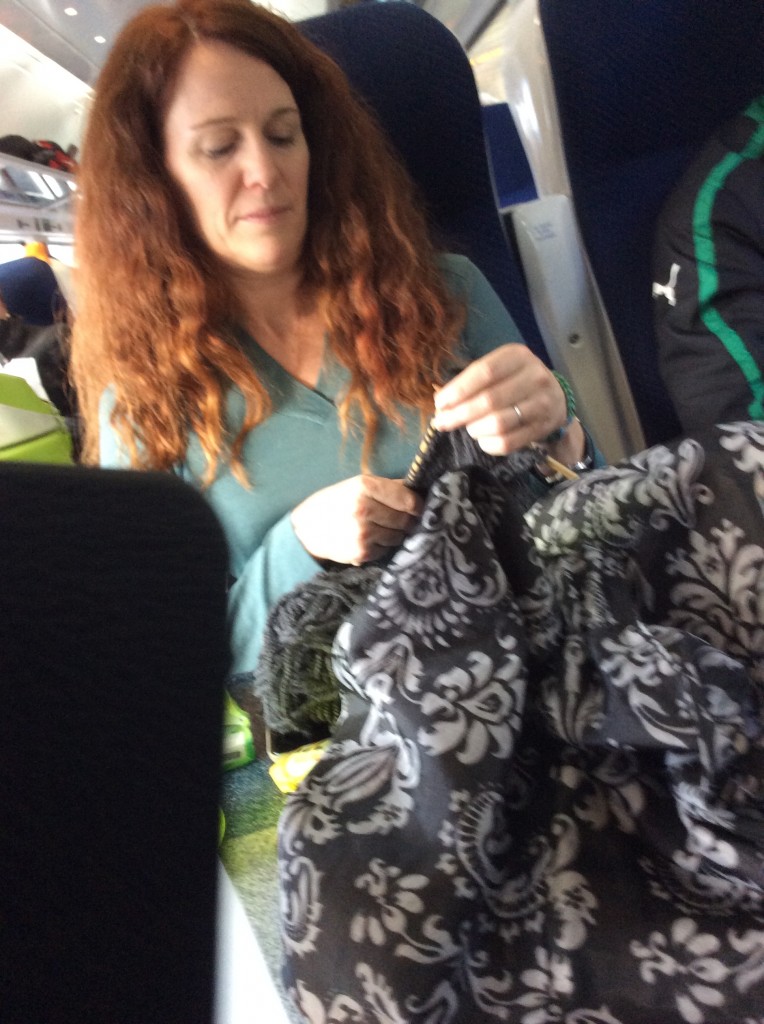 [Lisa knitting up that scarf] 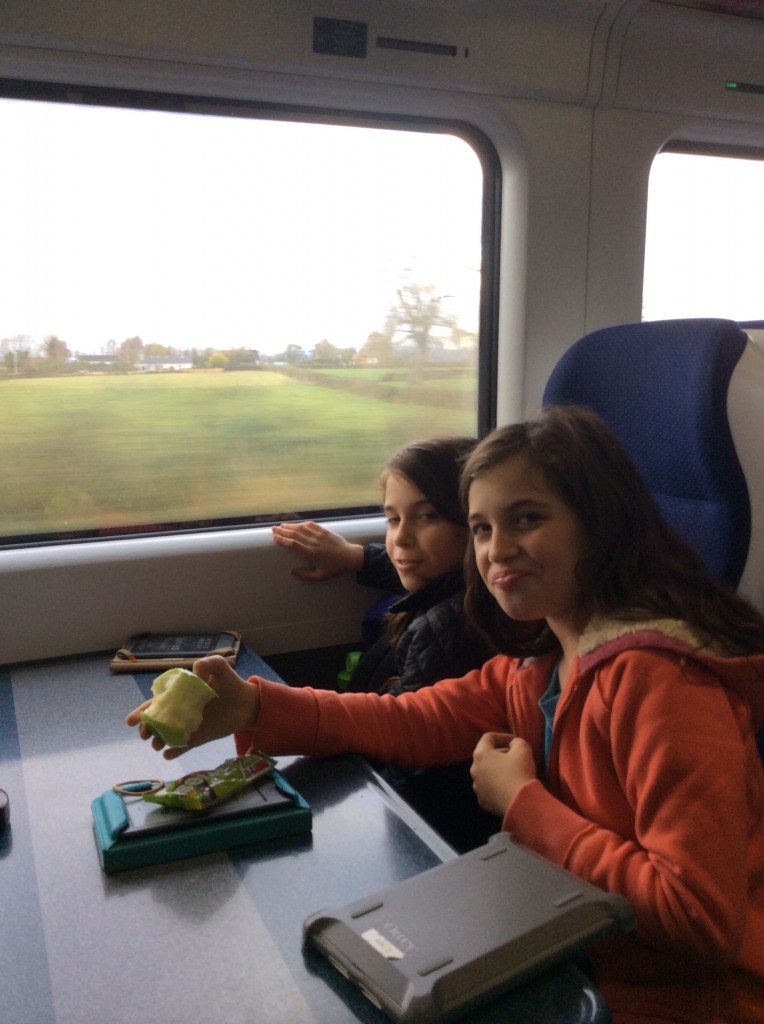 We’d chosen Killarney as our base in the southwest of Ireland since that region is said to contain a lot of “true” Ireland. 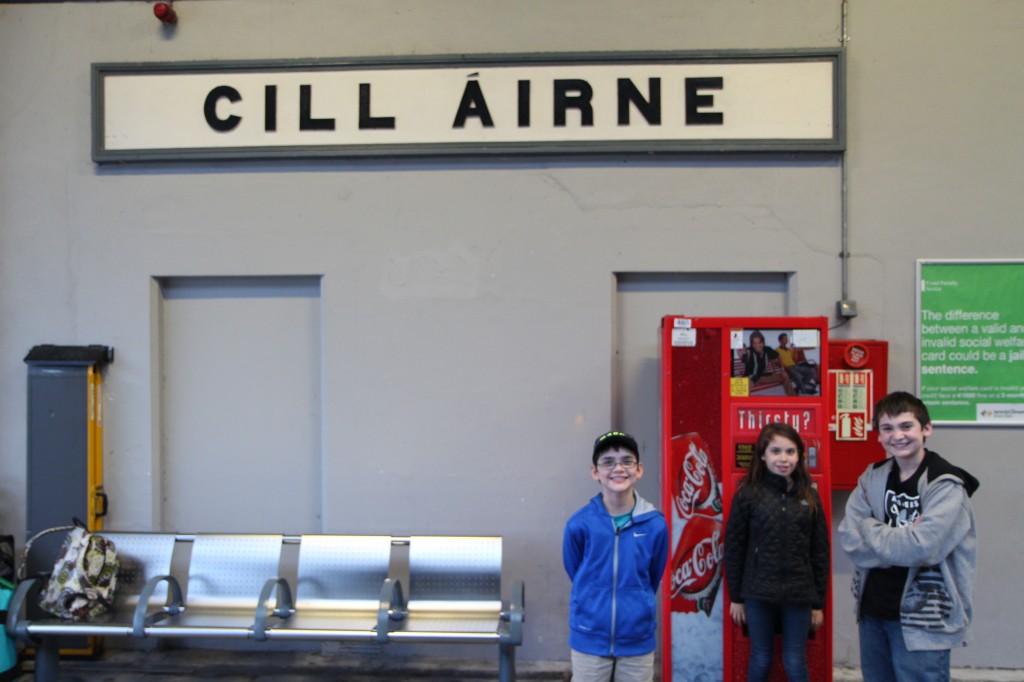 This part of Ireland boasts the Ring of Kerry, the picturesque town of Dingle and the landscapes of Killarney National Park.

Our now-typical vacation rental search had turned up “The Priory” a place its owners billed as having been built for a French noblemen fleeing the French Revolution.  That story sounded great to us.  The reality was even better.  The place had been lived in by our hosts, Tim and Bernadette and their kids, before they renovated and moved next door.  So it felt like, and was, a home. 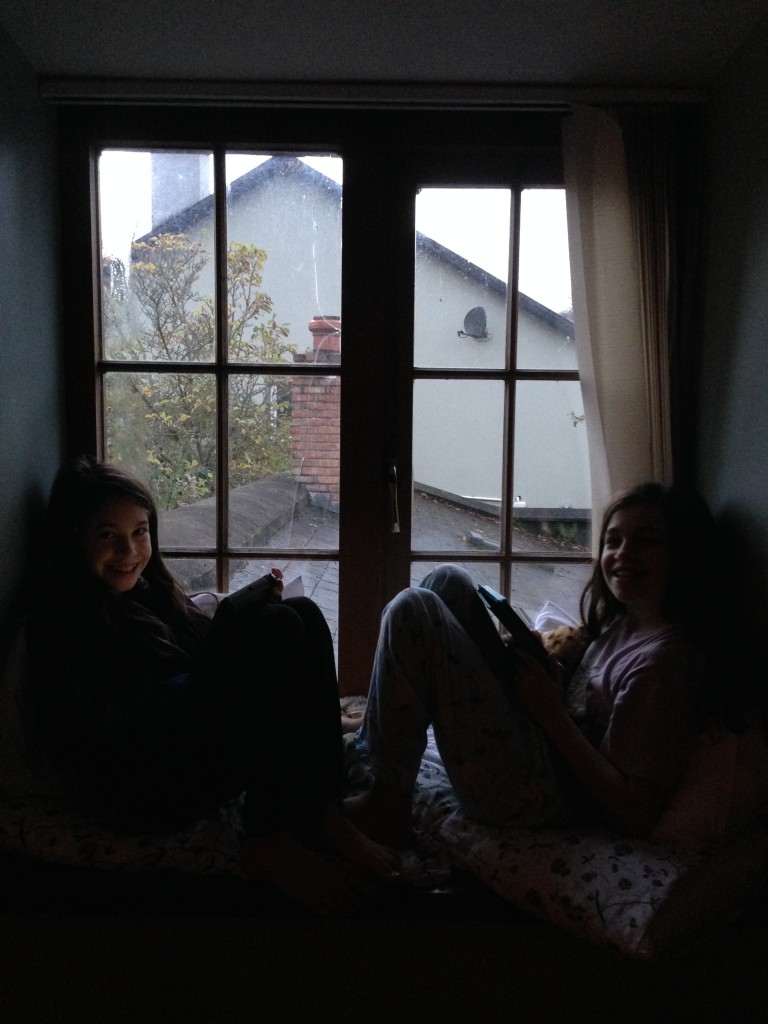 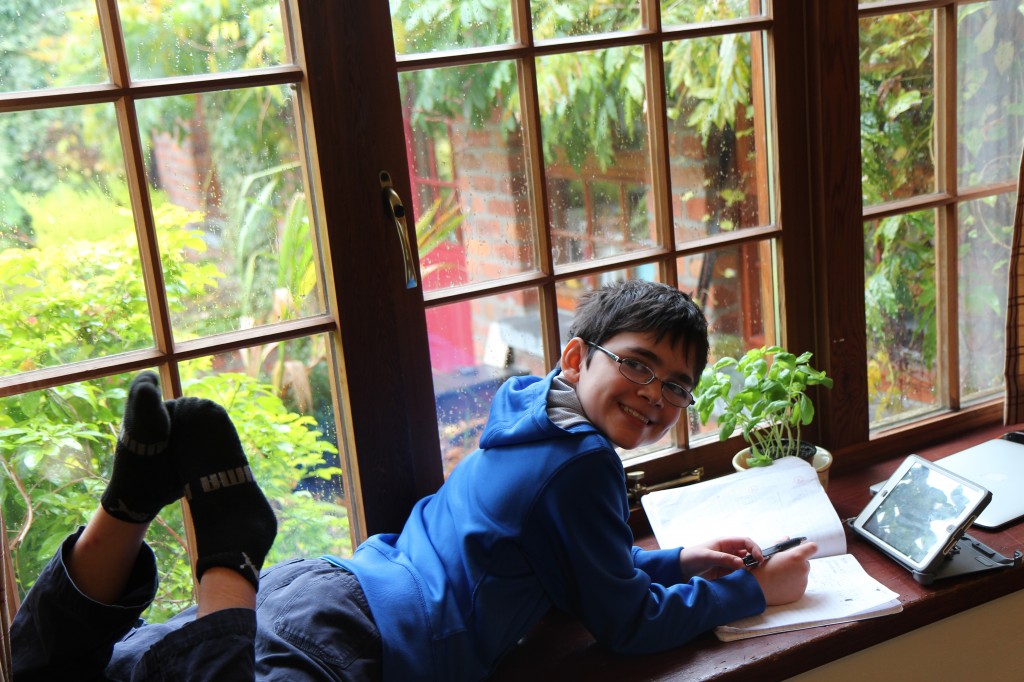 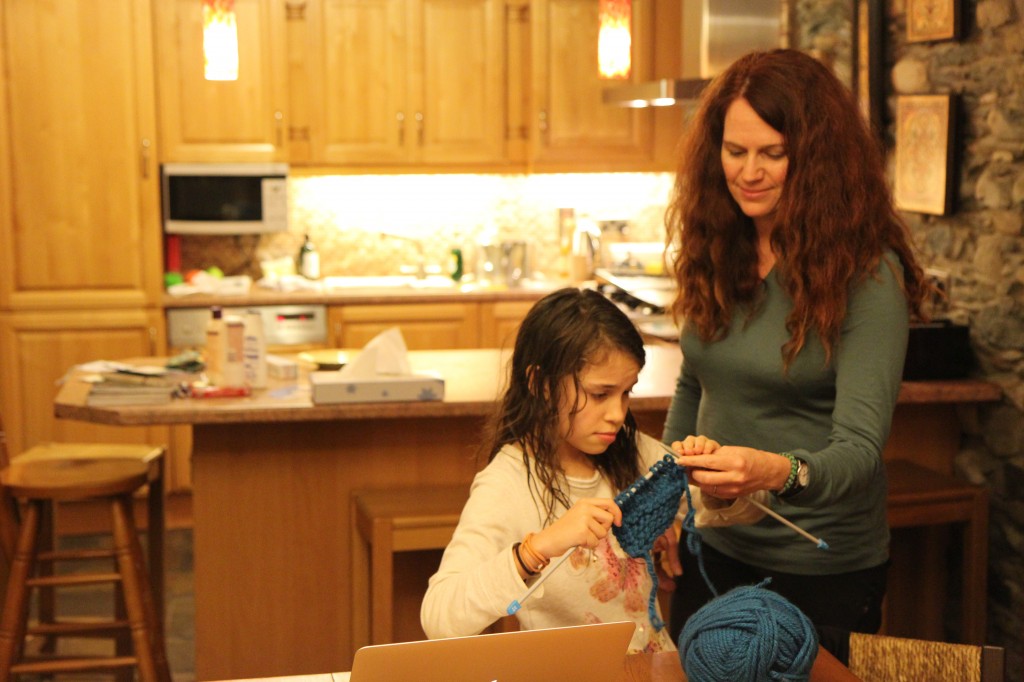 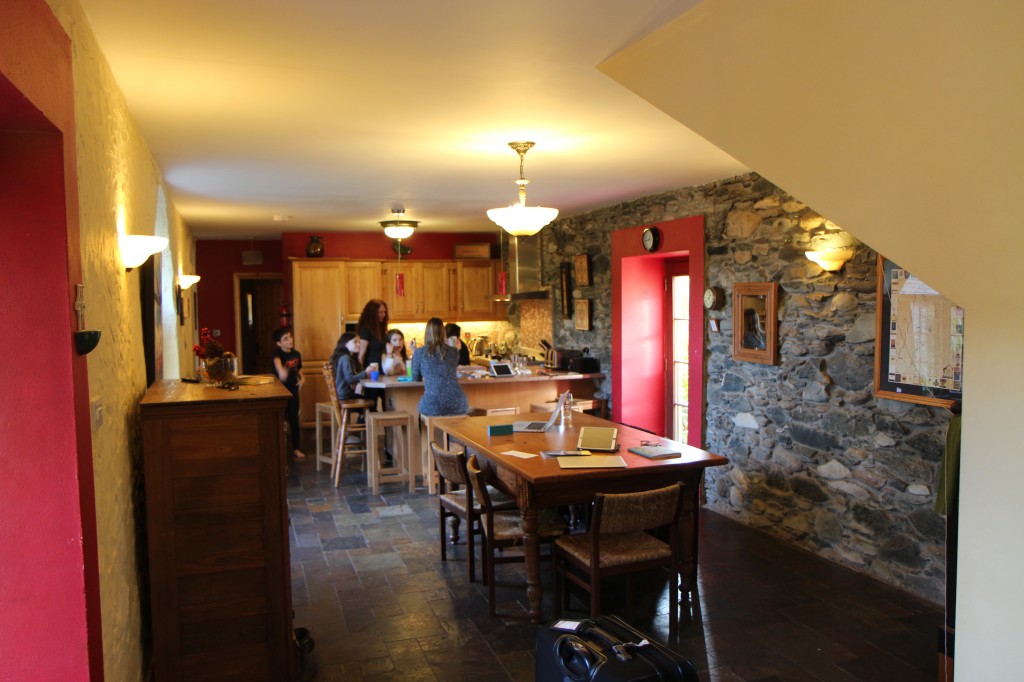 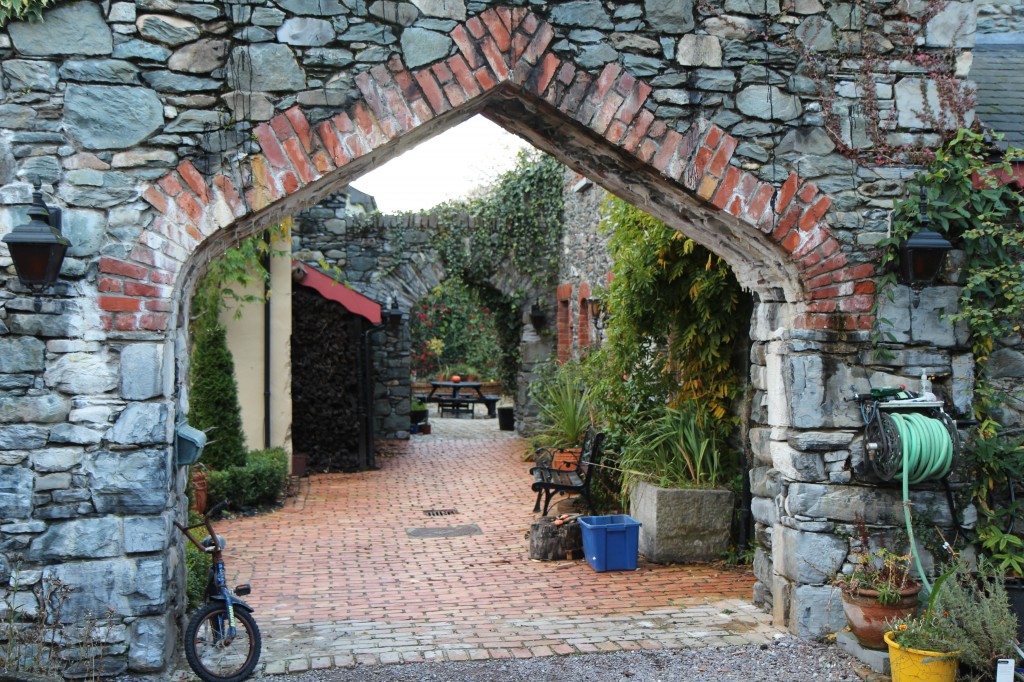 It was a 1.5 km walk to town center but we had an upstairs, a downstairs, three bedrooms, a laundry room and enough turf to burn for ten winters. 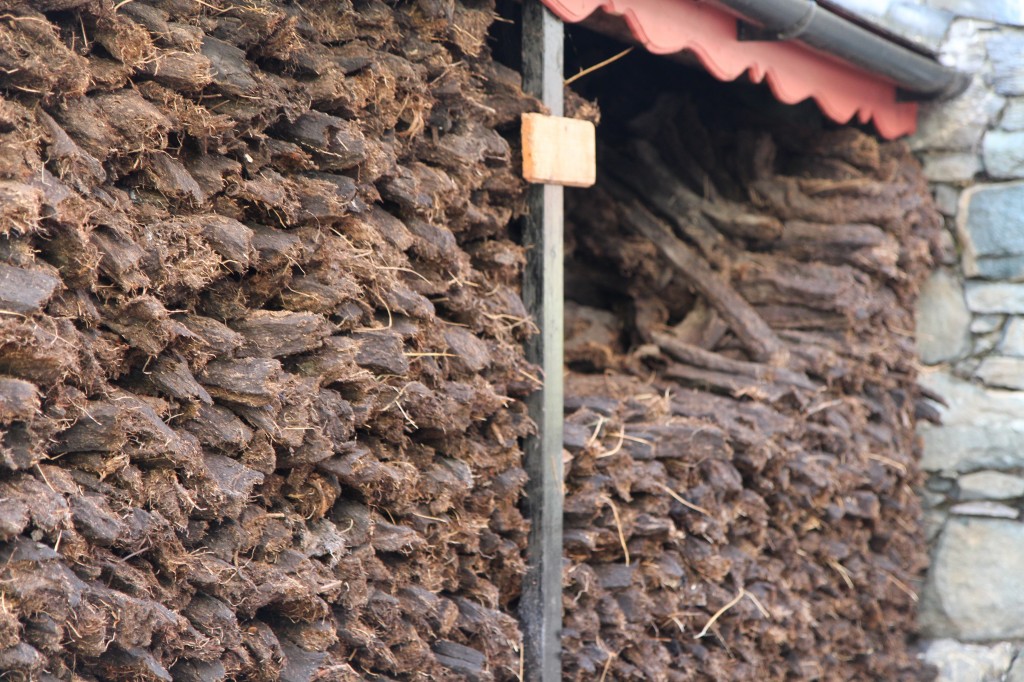 The dark and lightweight turf is carved out of the sod and we hear some Irishmen will burn it even in summer to lure that distinctive smell.  The turf burns hot and puts out a lot of smoke if you don’t close the wood stove door fast enough.  The kids loved to bring in the turf and the wood and to split the small logs with the hatchet. 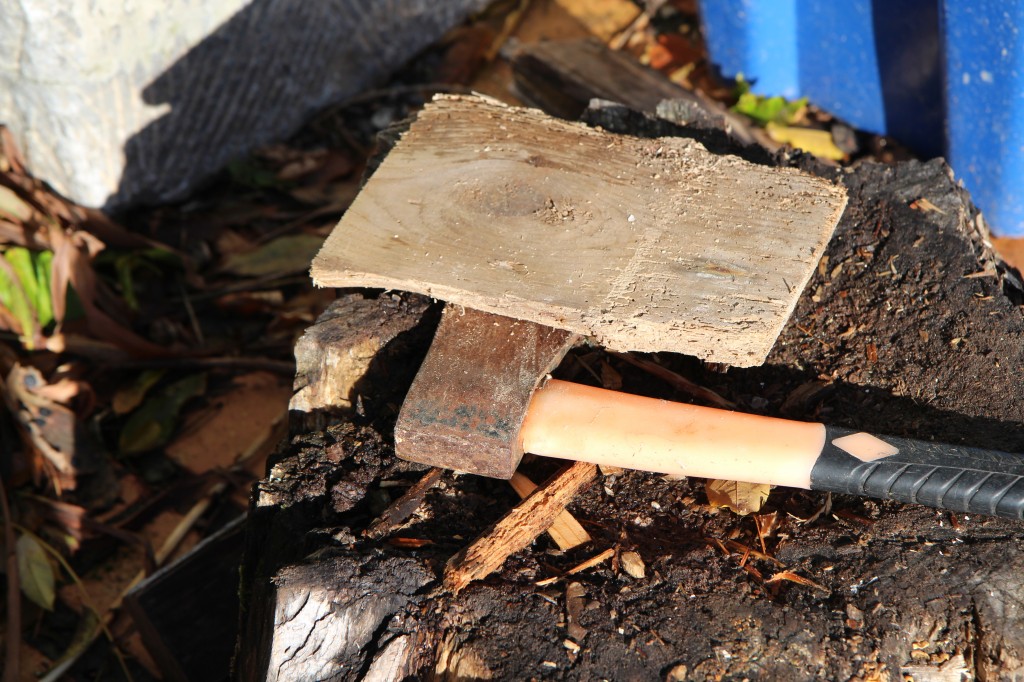 Sometimes, you’ve just gotta rubber band the head of your wooden axe back on and get down to some choppin’. 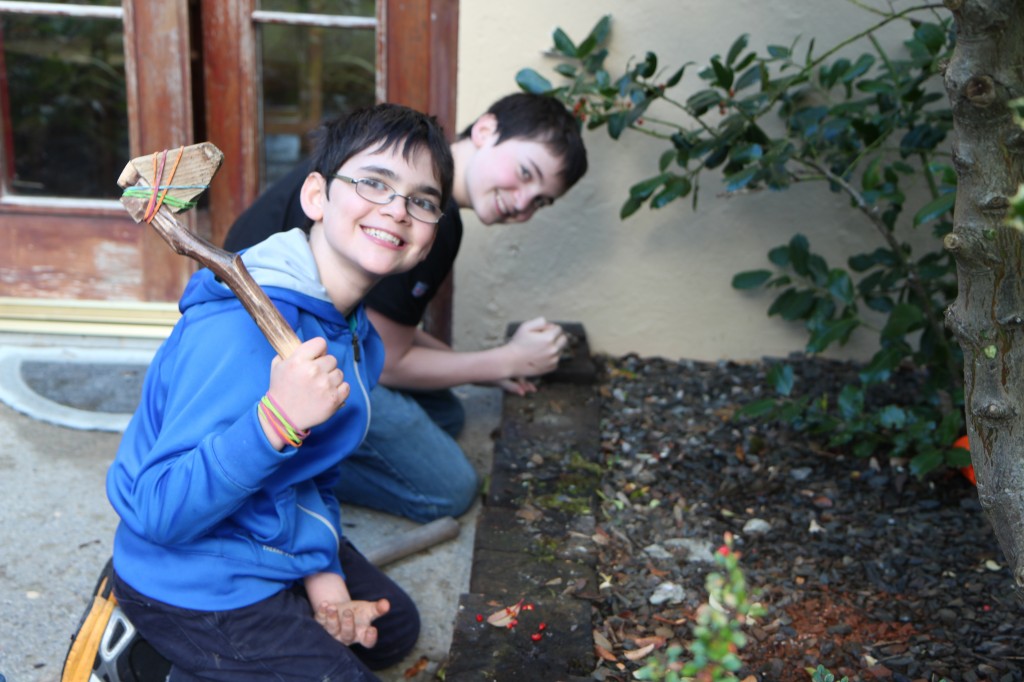 A short walk to catch glimpses of the “neighborhood” and the heights of Killarney National Park just down the road. 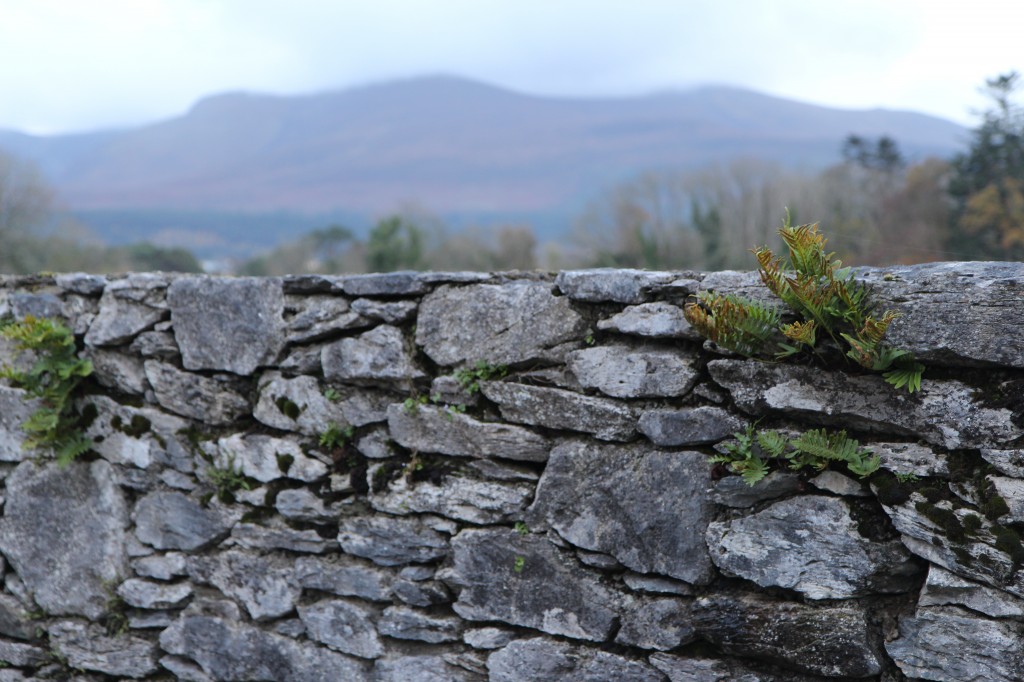 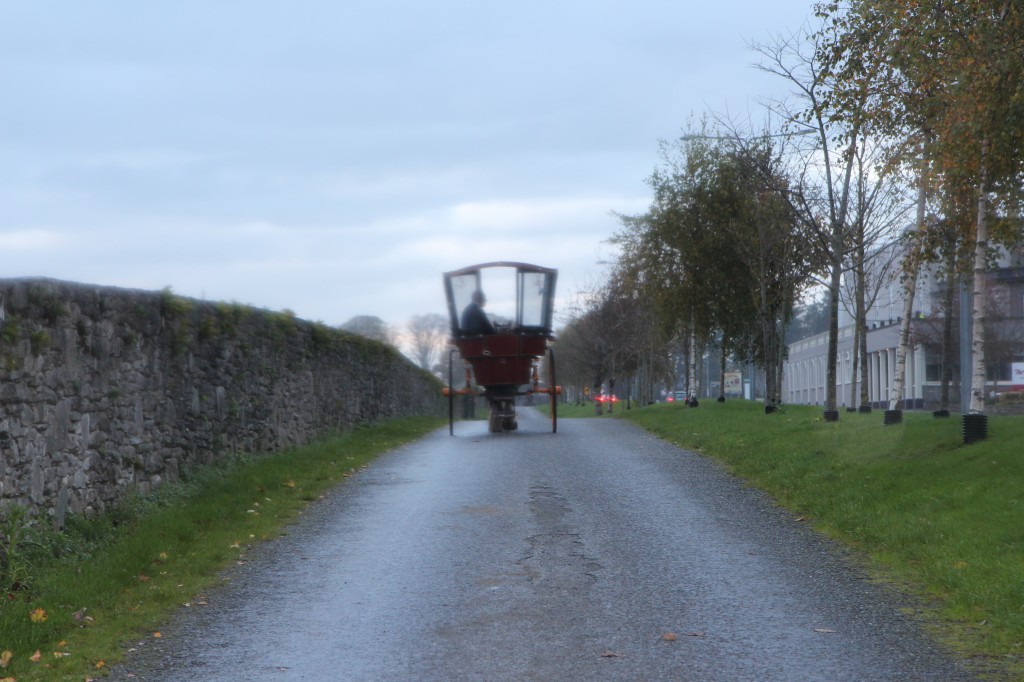 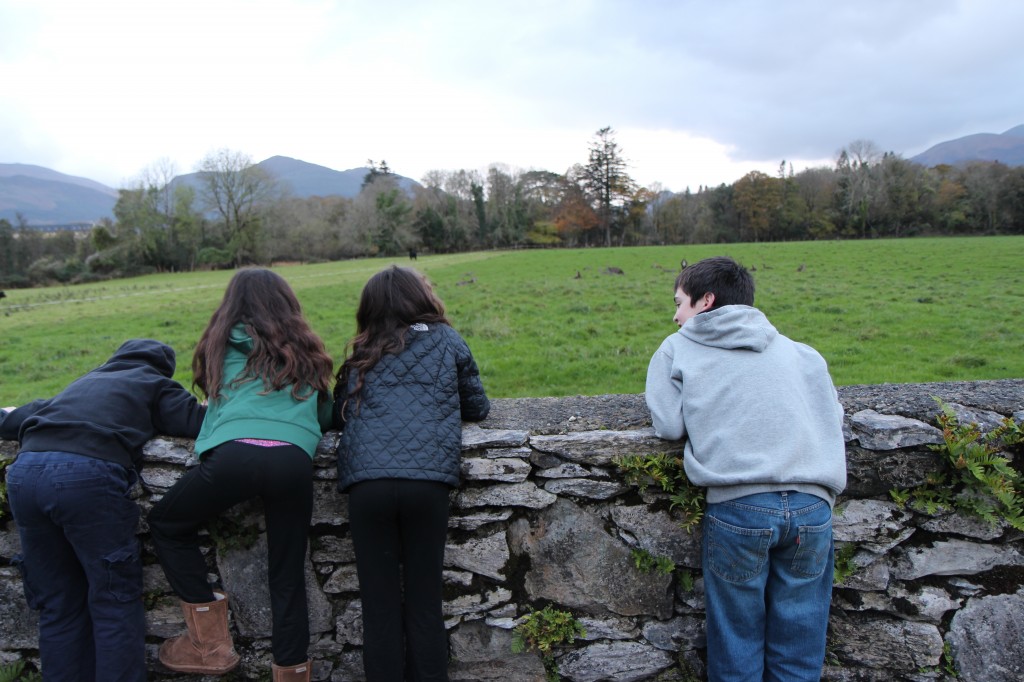 Yours truly renting a car with the steering wheel on the other side.  Watch out for those right turns across the intersection! 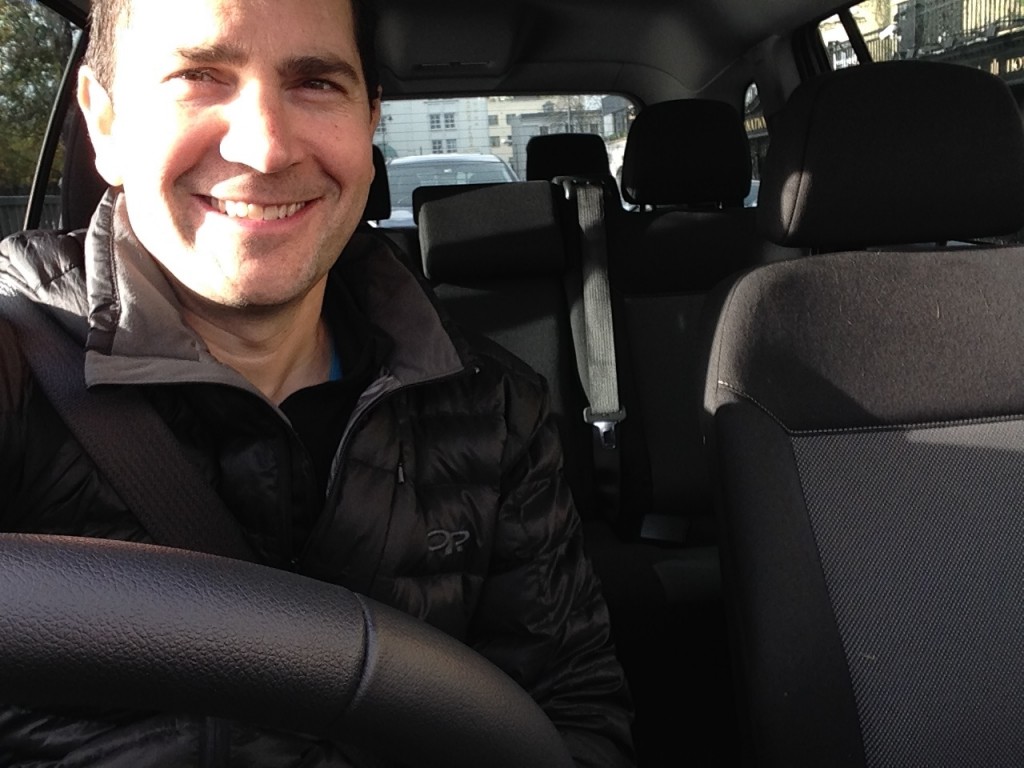 My apologies for leaving you hanging the last few weeks, as we were go-go-go during a tremendous visit with Lisa’s sister and brother and a beautiful stay with our friends the Weinsteins that I’ll tell you about later.   Then, we grappled with some relatively complex trip planning.  What should a family travel itinerary in Israel look like and who can help you build that plan?  Thank you for the help on that front.  And, after Israel, where to go exactly in Asia?  We’d developed a hole in our itinerary a while back upon learning that China wanted more than $1000 in entrance visas alone for our family.  So, flying to SE Asia from Israel presents some interesting connections to think through.  Do you put the family through Moscow even without a Russian transit visa?  If the aircraft is severely delayed would you end up Snowden-style living in the airport?  Is this a good time to connect through the Ukraine?  I wasn’t so sure about a long layover in Addis Ababa, Ethiopia even if it was the cheapest ticket.  We’d had to make a tough choice to visit Greece over Turkey but now should we try and get a few days in Istanbul?

The world is still a big place.  We’ve had to keep narrowing the countries and cities that we want to experience.  It seems smaller and smaller in the digital realm but is vastly enormous when you look to move the family around.  A little time on the road gives you a powerful sense of appreciation for the courage of ancient explorers.

Happy ones in Ireland! 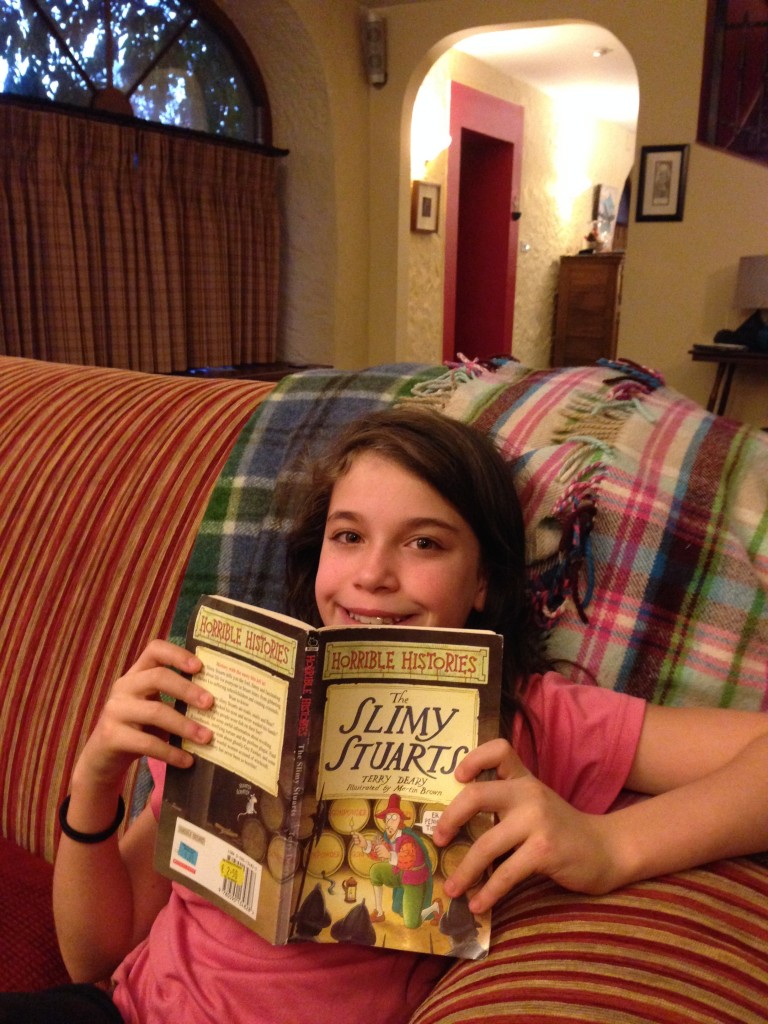 [Ana soaking up a Horrible History] 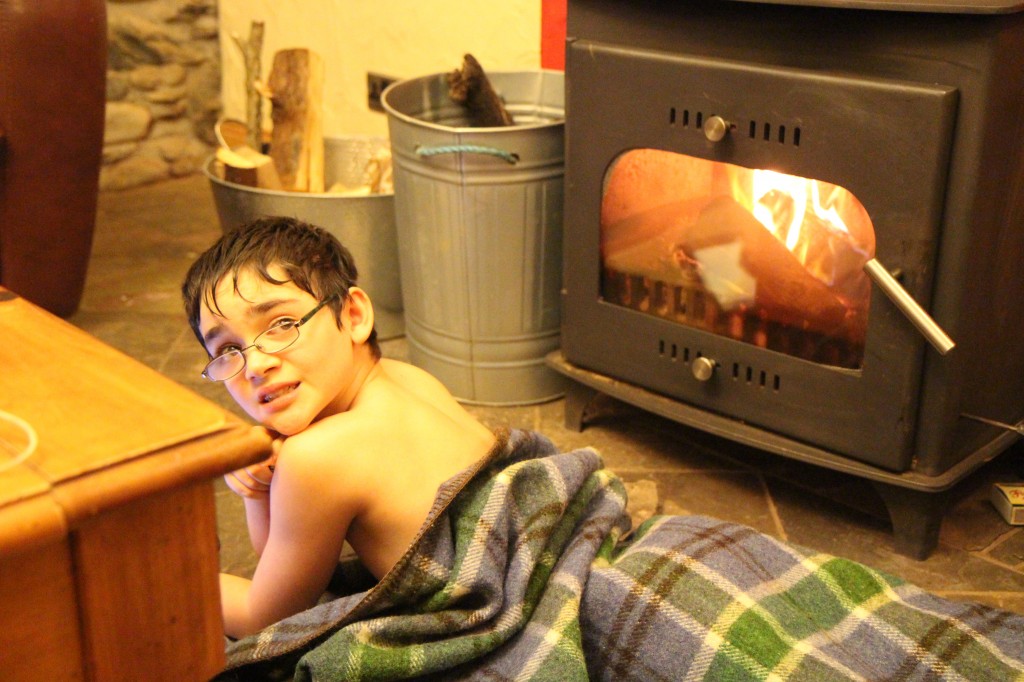 [Will soaking up a little heat.  Note the one bucket for turf and another for wood]

17 thoughts on “We loved you Scotland, now on to the Emerald Isle!”