Luke pointed out one day, “You seem to be drinking more beer here, Dad.”

Me—“Well, yes, uh, yes I am.”
We are in Bavaria after all.  I almost feel like it would be unnatural not to enjoy a few of the delicious, tall cool ones around here.  I’m supporting the local economy, right?  I’m sure it’s for the good of the people.  These Bavarian beers tend to be weiss (wheat) beers and “dunkel” (dark) weiss beers.

I’ve been here almost two weeks so I’m confident I can speak about an entire country with some authority.  I am a monolingual American after all.  Forgive me for not getting pictures of more of these things but they are fleeting.  I’m working on it.  Many of these noted differences should be a good opportunity for you to laugh at a guy who does not speak the language (especially former exchange students and anyone who took German in HS and college).

We enjoyed dinner out at a local gasthof (seems to mean informal restaurant) near the train station and sat outside on a cool evening.  The waitress had spent a month in New York and must have been sent to our table because of her excellent English.  She wore a traditional Bavarian dress as a uniform.  She asked what we wanted for drinks and asked me right away if I wanted a beer.  It seemed to be assumed.  I clarified I wanted a small beer as I was driving and I think she asked, “Oh, a half liter?”  The liter mug seems to be the norm around here.  Will cracked us up by saying, “I don’t like beer yet.”  The waitress laughed and said, “You will, you will.”

Our friends, the Mantzes, were kind enough to lend us a book on Culture Shock in Germany.  Of course, I’m not done with it yet.  I am an American after all, and only pretend to care about other cultures…      Not true, not true.   I took the kids down to the creek and we ended up building a little pile of rocks in the creek.  We received some smiles from passing locals on the trail and a couple looks that bordered on the stinkeye.  I read in the book later that the Germans generally prefer it to be quiet between 1-3 in the afternoon.  We may have been violating that time frame and we are not the quietest crew.  It might also have been related to the fact that we all had on red, white and blue body paint and were chanting “USA, USA, USA!” for a few hours.  Sundays, no one mows the lawn and nearly every store is closed.  Even in this vibrant, small town, most stores close on weekdays between about 12 and 2.

On the highways, I’ve seen sedans and hatchbacks pulling tiny, economical trailers that hold a couple of beds.  I have not seen one full-size pickup yet.  They are woefully behind in their King Ranch truck quotient.  Also, no Jeeps for these mountain roads.  Not a surprise when gas costs about $8-$10 a gallon.  I’ve heard the drivers must pass a rigorous educational course and it shows on the tight roads.  You’ll also see motorcycles with sidecars and people actually riding in them.  Everywhere, are the ‘wagons’ (station wagons) whether Audi, BMW, VW, you name it.

I now know where 80’s music goes to live forever—German radio.  While driving, we’ve heard the best musical decade on several stations.  Bring it on, you know the 80’s were the best.  Flock of Seagulls, anyone?  Police, Whitney Houston, Steve Winwood, vintage U2, Journey—it’s a musical time capsule.

Rest stops are something to behold.  Compost bins, decent restaurants, beautiful picnic tables but you do have to pay for the rest rooms, generally.  We saw reserved parking spots for women (or maybe it was mothers) near the park for children.  In some places, we’ve seen seven different recycling bins for various products.

They label their trails with precision.  There were metal trail signs, just like road signs, with time to hike instead of miles.  Faithfully placed trail markers guide hikers through any confusing areas.  You frequently hike through fields that hold farmers’ cows and horses.  Barbed wire was wrapped around several parts of the trail since the land was also used for grazing.  The trail was challenging and a few parts in America would have had legal notices on them warning of imminent destruction or the like.  Of course the unintelligible signs (to us) along the trails might have been legal notices for all we knew.

At the local grocery store, you pay separately for the bakery.  Apparently, so people can get their fresh bread fix without having to wait in the full line?  A few American brands have made the shelves; Palmolive, Kellogg’s, Miracle Whip.  I’ve already described how you’ve got to show up with a Euro or 50 cent Euro coin to unlock a grocery cart.  The wasps fly right into the bread case since it’s near the door.  No effort was made to stop them from setting up shop on some good-looking pastries.  We saw this in two separate places and no one seems to mind.  They must not have received the memo that you need to design a grocery store around two enormous aisles of soda, chips, crackers and snack foods.

There are approximately 87 different types of sausage, wurst and other types of meat at the deli counter.  I don’t speak any German and the explanatory names are lined up at the front edge of the display case.  The meats are distributed throughout the case with very little relationship to the signage.  I do a lot of pointing to get the specific wurst I want.  I don’t want to hold up the line to ask her to write out the name of the item.  The funny thing is that I get exactly what I’m asking for and still don’t know what it is.  Each one we’ve tried has been fantastic.  We are playing a lot of ‘learning German’ apps but I need to find one on German meats identification.  This could be the next big thing for all the confused American travelers—a Meat Facebook.  I think I need to find a venture capitalist to get this thing off the ground.

I’m sure you’ve heard German before but I had missed how long some of their words can be.  The name of our hotel is 12 syllables long.   Overall, it sounds familiar to our ‘English’ ears.

The playgrounds have real teeter-totters and actual zip lines.  We even found some kind of hamster wheel thing the kids love.  Kids over the age of four actually play on the playground equipment. 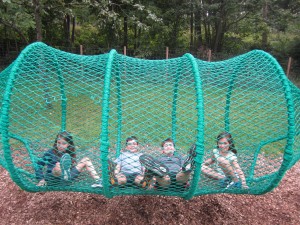 A few typical European items?—We have a very small fridge in our flat so we are going to the grocer every couple of days.  It looks like we are not alone.  Lots of folks are biking to and from the little store with a small bag, likely for the bakery or the grocer.  Going to the bakery in the early morning for fresh bread and pastries seems to be a male activity.  Men and teenage boys bring back the goodies.  The food is simply fantastic.

Exquisite chocolate and candy, as Will will attest. The Happy Hippo shots go out to all the aircrew that love these things.

When we were first getting in to our apartment, we saw a couple walking their small dog into the door next to ours.  As I was fumbling with the key, I think it was the man’s bright yellow Crocs (shoes) that caught my eye.  I looked up to see he was wearing a dark pink jeans jacket and a matching pair of capri pants.  I almost forgot all about the key.

Lisa just saw a man biking down the road wearing yellow pants.  I’m not sure if they were rain pants or not.  But the other day, at the ice cream shop she did point out a man sitting with his sons while wearing white shorts with grey flowers on them.  Not that there’s anything wrong with that…

He inspired me.  What a wonderful country!  It made me wish I’d brought my American flag pants and my ‘Merica T-shirt.  Anyone got the number to Amazon Europe?

12 thoughts on “A few German tidbits”