You’ve likely heard of the famous Neuschwanstein castle in Bavaria.  Lisa’s brother gave us a 37-million-piece  jigsaw puzzle of the castle that we throughly enjoyed.   You might have heard how this German castle inspired the Disney castle.  As an American, it makes perfect sense to me why someone in Germany would build their castle based on the greatest ‘Merican amusement park known to mankind.  Was it over when the Germans bombed Pearl Harbor?  No, sir.

Please forgive the completely unnecessary Animal House reference and my pointing out that Animal House was filmed at the University of Oregon.  Wish the Ducks  had a real statue with the phrase, “Knowledge is good.”  I will try to restrain myself from further ostentatious Oregon pride by skipping a lengthy explanation of the Oregon-classic movie “Goonies”.

Now back to our regularly-scheduled Europe, I’d seen Neuschwanstein briefly on a NATO trip a few years back.  Reading the guide book now, I can see there were horse carts and trams to take you up to the high castle.  But when we visited, we were in a hurry, didn’t ask many questions and ended up trudging up the steep, 30-minute hike.  No worries, just a good workout.  I remembered how the interior had underwhelmed me compared to the jaw-dropping mountain setting and castle exterior. 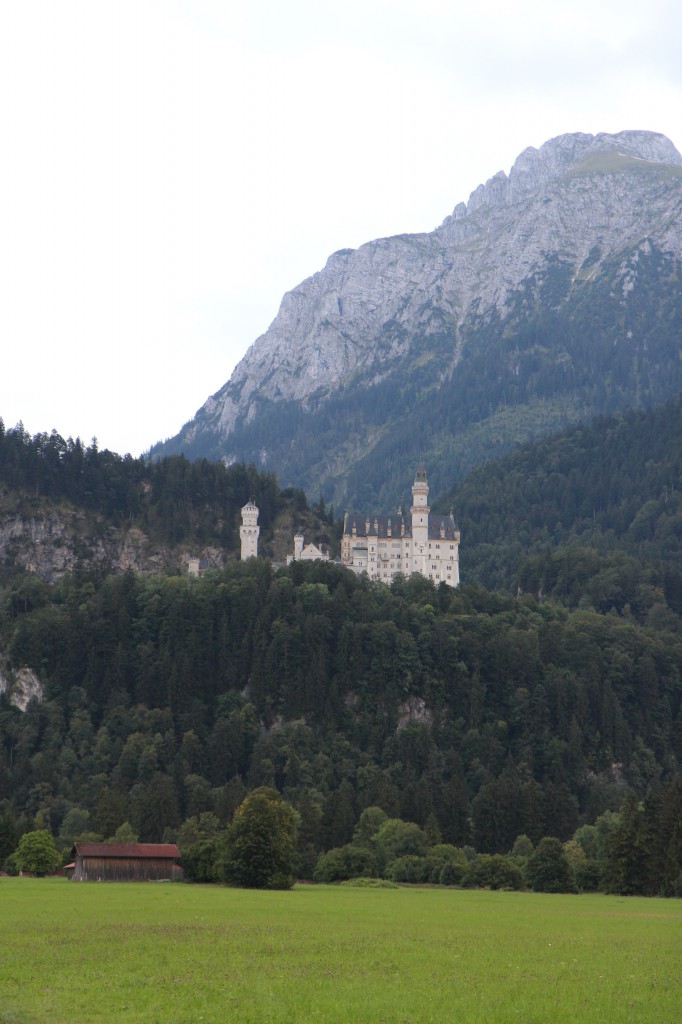 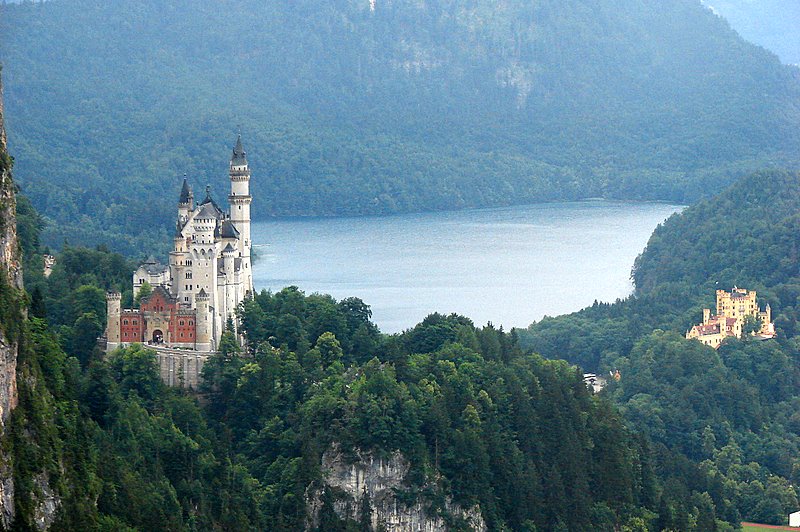 Actually this aerial shot was not taken from any ultralight I brought on the trip–just available from Google Images but it shows the proximity of the two castles.

We want to show the kids some of the castles of Europe and what better way to start than with Ludwig II’s castles?  Crown Prince Ludwig II ascended the throne at age 18 (in 1864) after his father died from an illness.  Two years later, Prussia absorbed Bavaria and Ludwig’s power was nipped in the bud.  He retreated into his love of music, architecture and art.  Ludwig was a passionate patron of Richard Wagner.

Our first visit of the day was to Linderhof palace.  He inherited the castle from his father and completely renovated it in the over-the-top Rococo style. 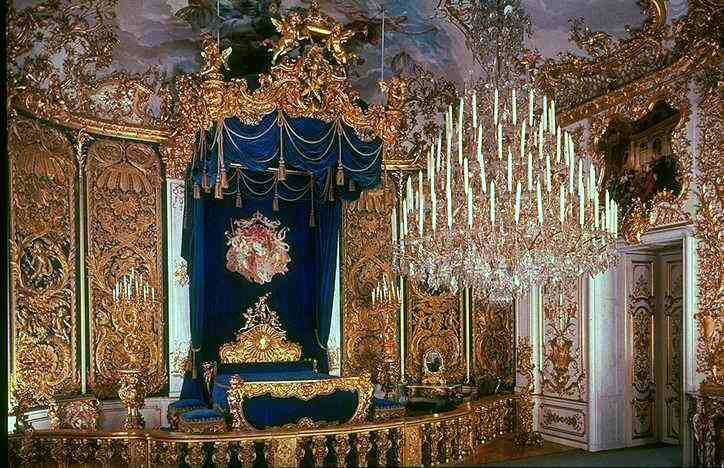 This is the only castle he finished during his lifetime.  His family had at least fifteen castles.  Ludgwig idolized the French Sun King Louis XIV as the embodiment of an absolute monarch that expressed his ideal of a God-given right to rule.  This was no longer possible in the Europe of Ludwig’s day so the themes selected seem a longing for days gone by.  The French palace of Versailles inspired the Linderhof renovation.  As you enter Linderhof, there is a statue of Louis XIV gloriously mounted on horseback beneath a sun emblazoned on the ceiling. 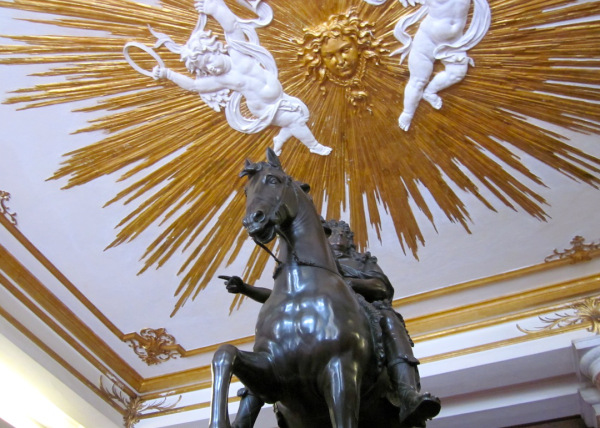 The banner entwined within that sun is “Nec Pluribus Impar”—roughly translated as “not unequal to many”.  This was Louis XIV’s, the French Sun King, personal motto.  Our guide offered an explanation as something along the lines of being capable above others or better than others. Nearly every portrait in the castle proudly displays a portrait of a French monarch, and his mistress.  A sculpture of a French king standing on the vanquished (or our guide told us, the people) flanked the marble fireplace.  Ludwig had a dining room table that rose into the room so he could dine alone.  Servants would prepare the meal and completely set the table downstairs.  The hall of mirrors where he liked to read at night presented images of the candles around him into infinity.  He would often read all night long and sleep during the day.  The rococo style includes “3D” cherubs reaching out of their frames and into the next.  His bedchamber contains tapestries of people offering their homage to the great French monarchs.

The grounds are nearly as impressive as the palace interior. 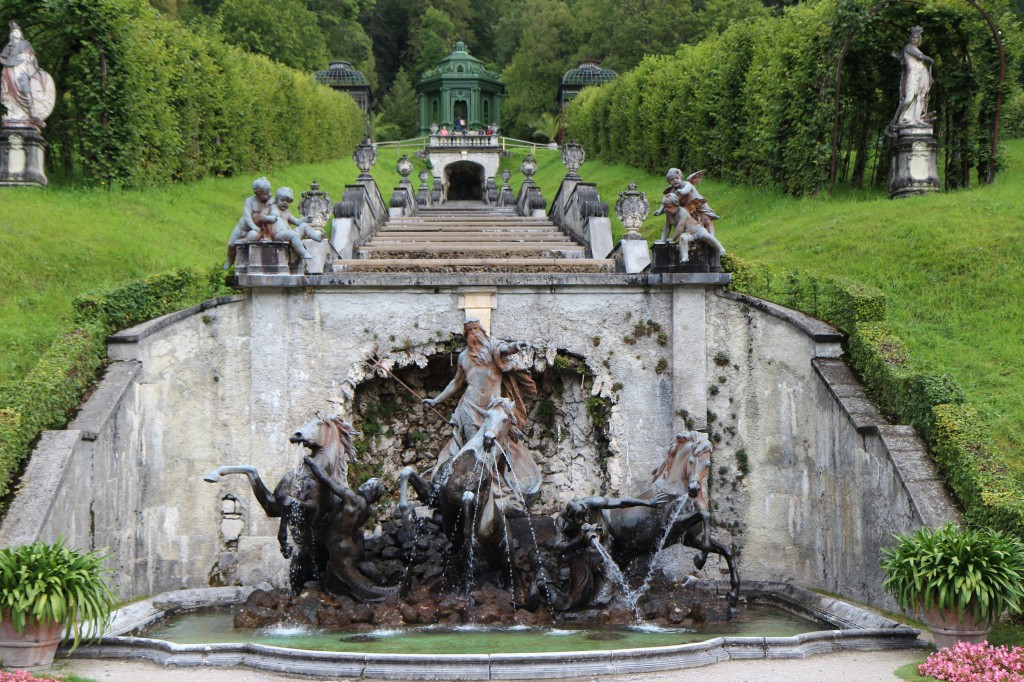 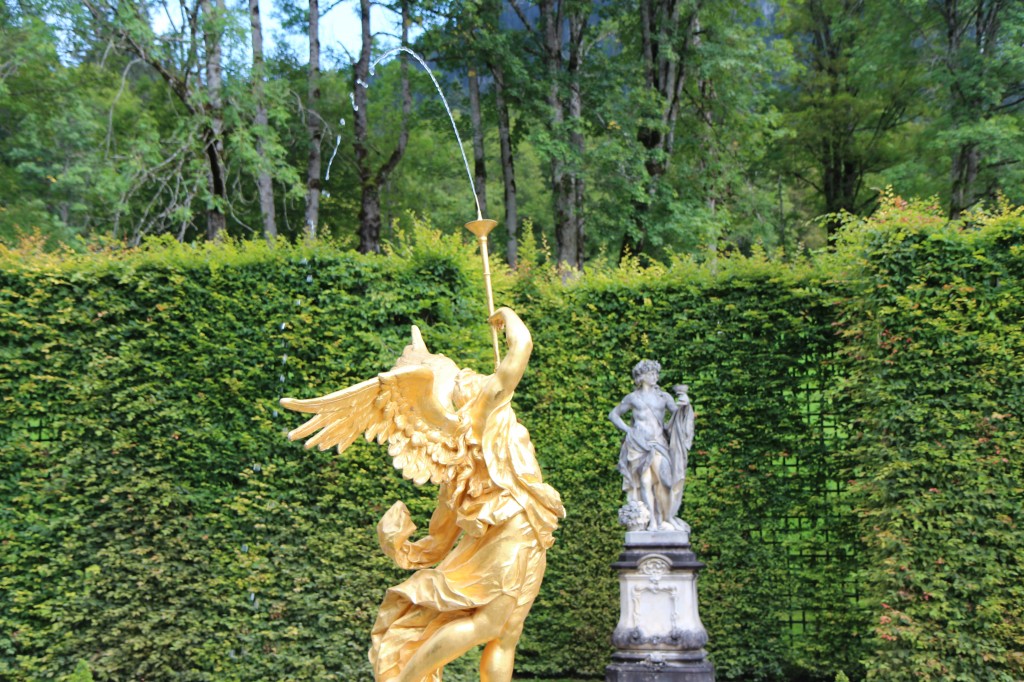 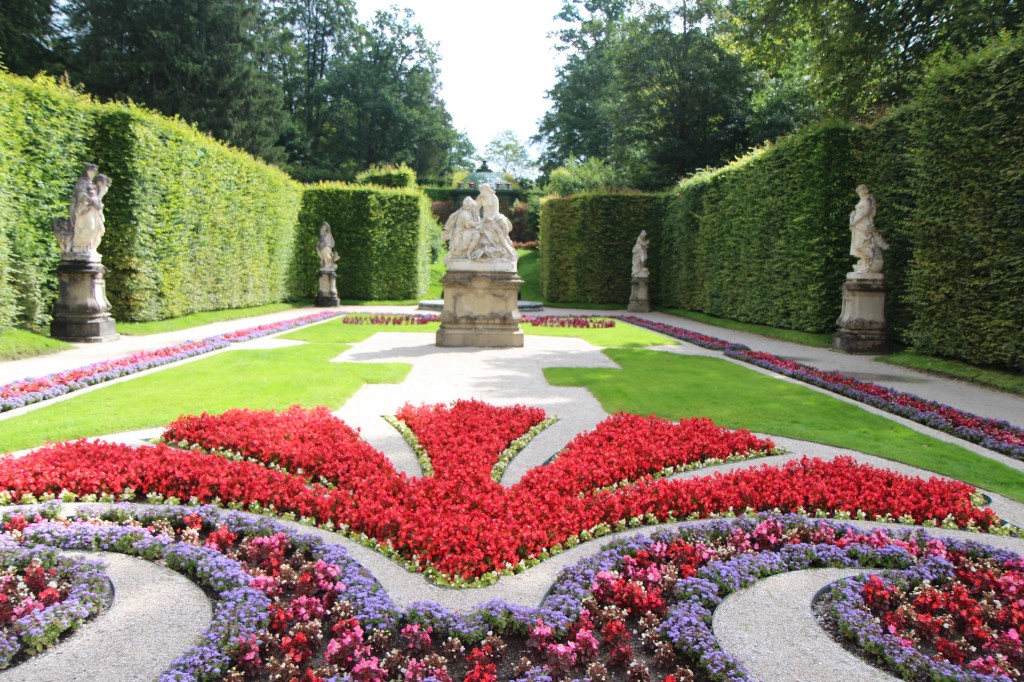 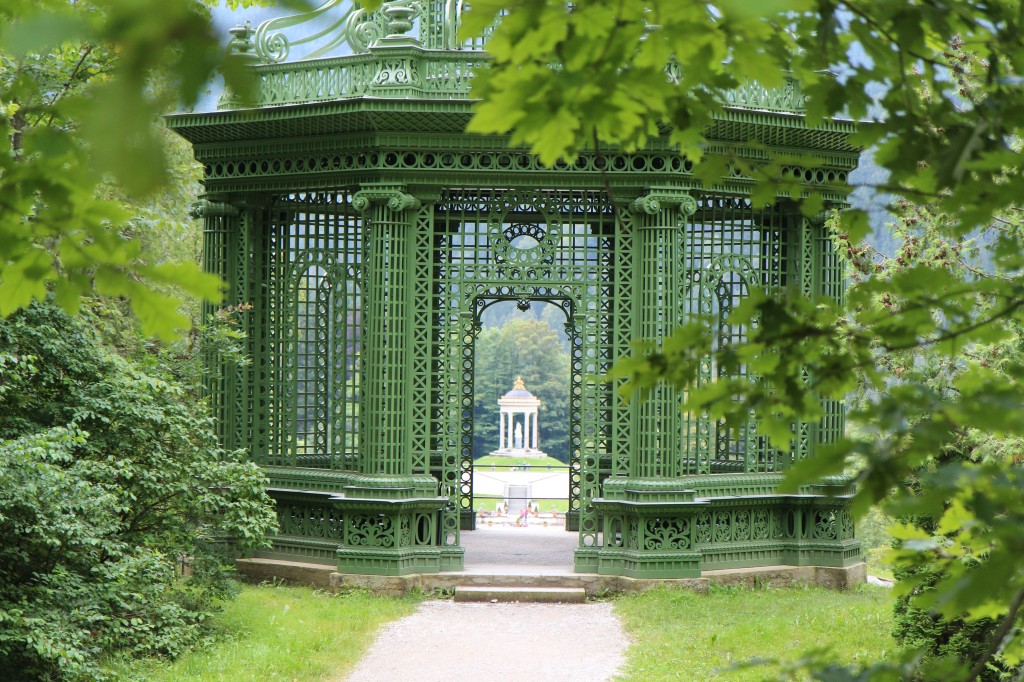 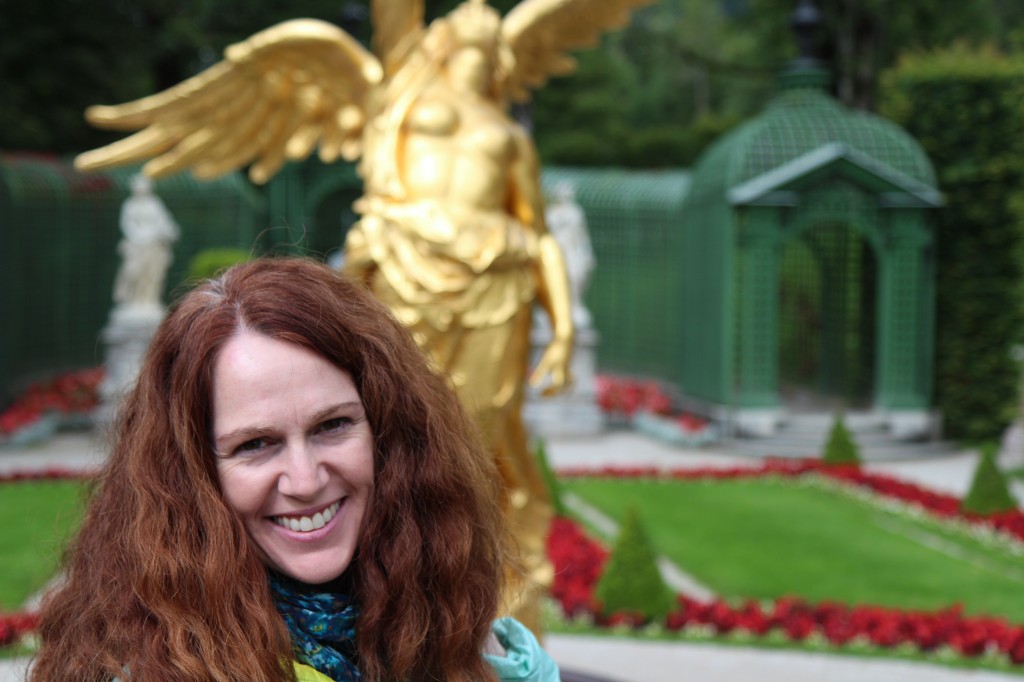 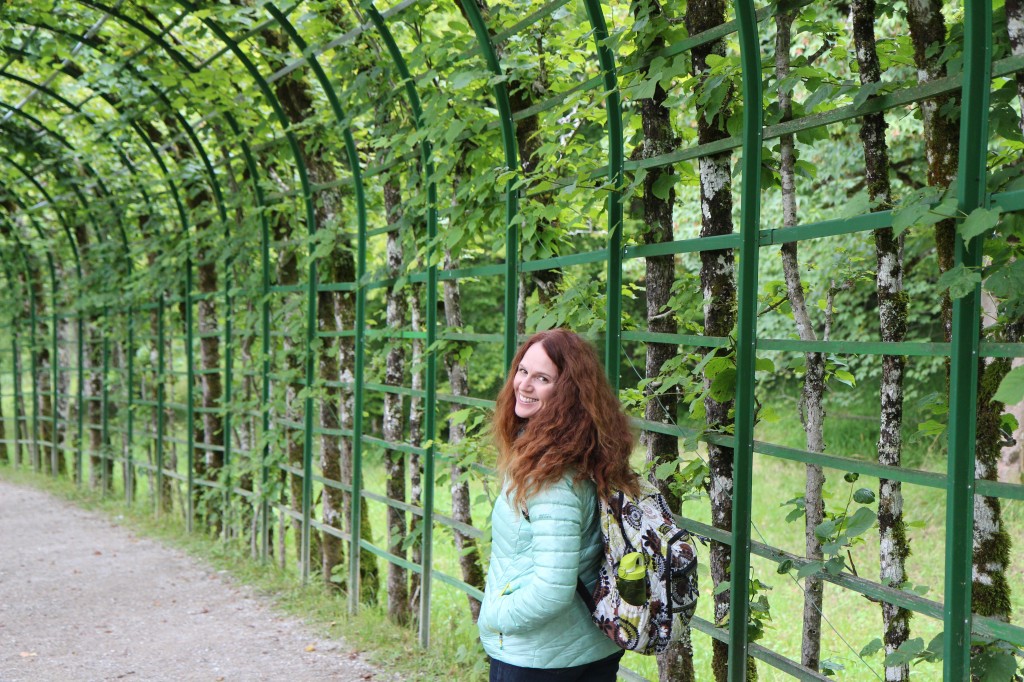 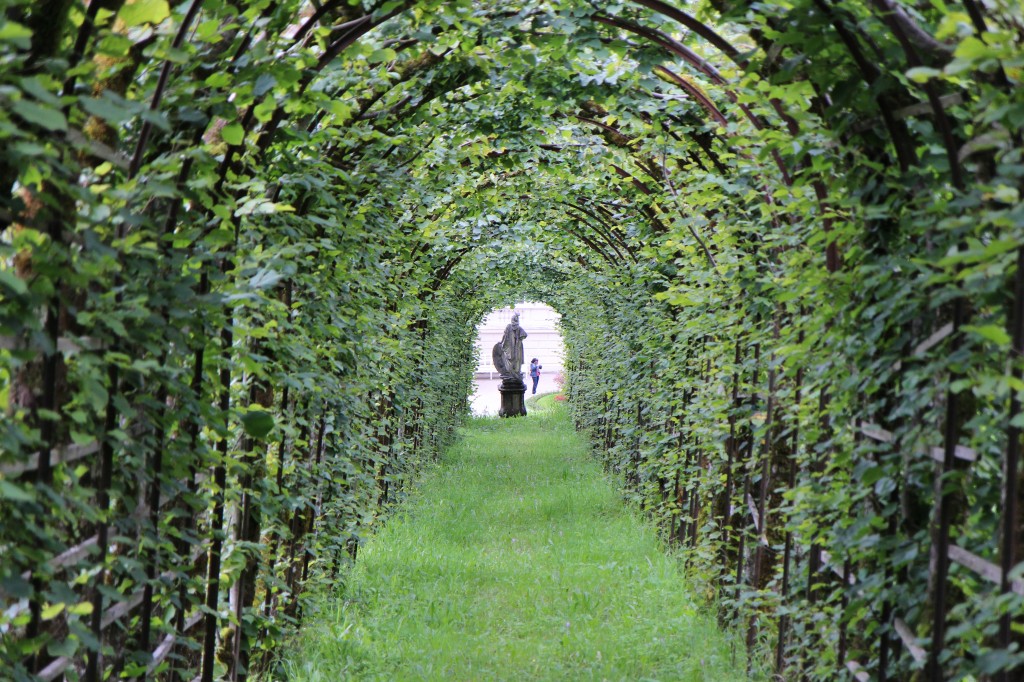 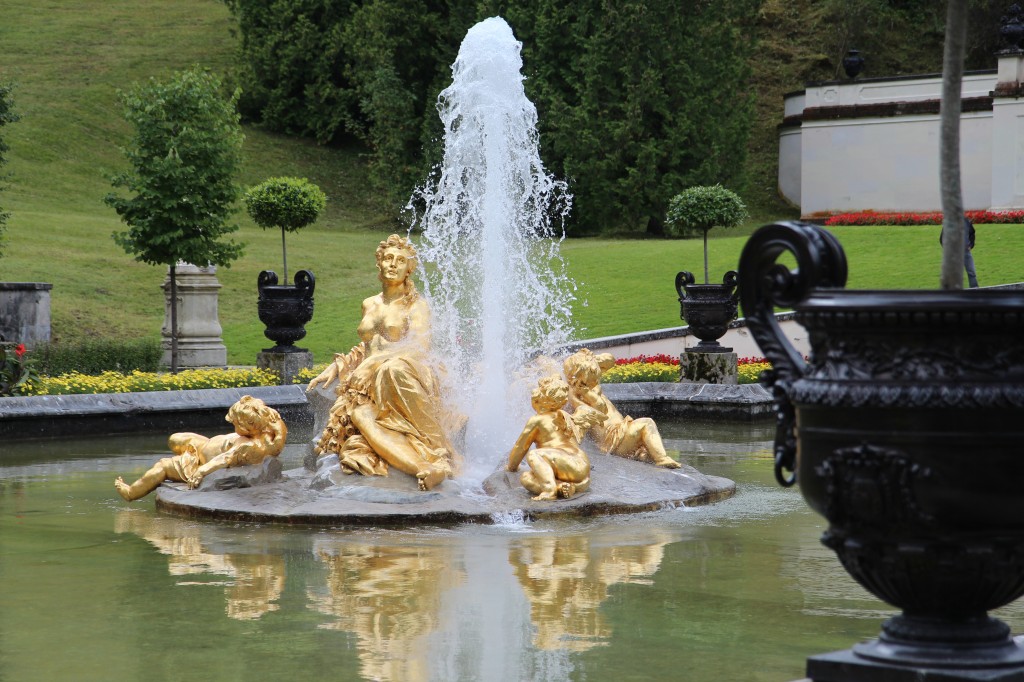 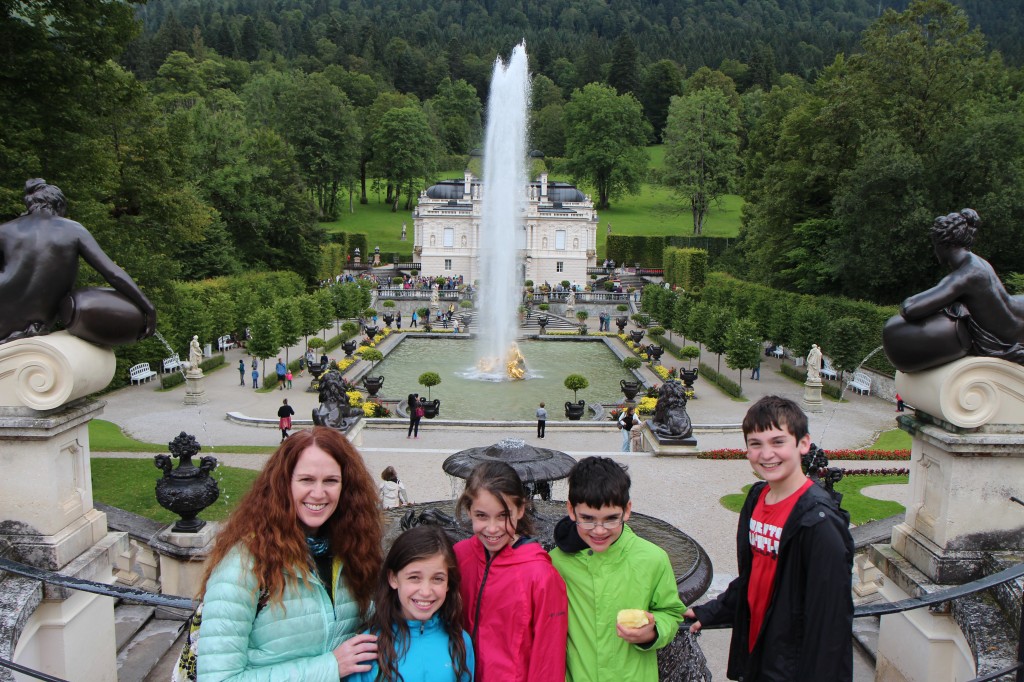 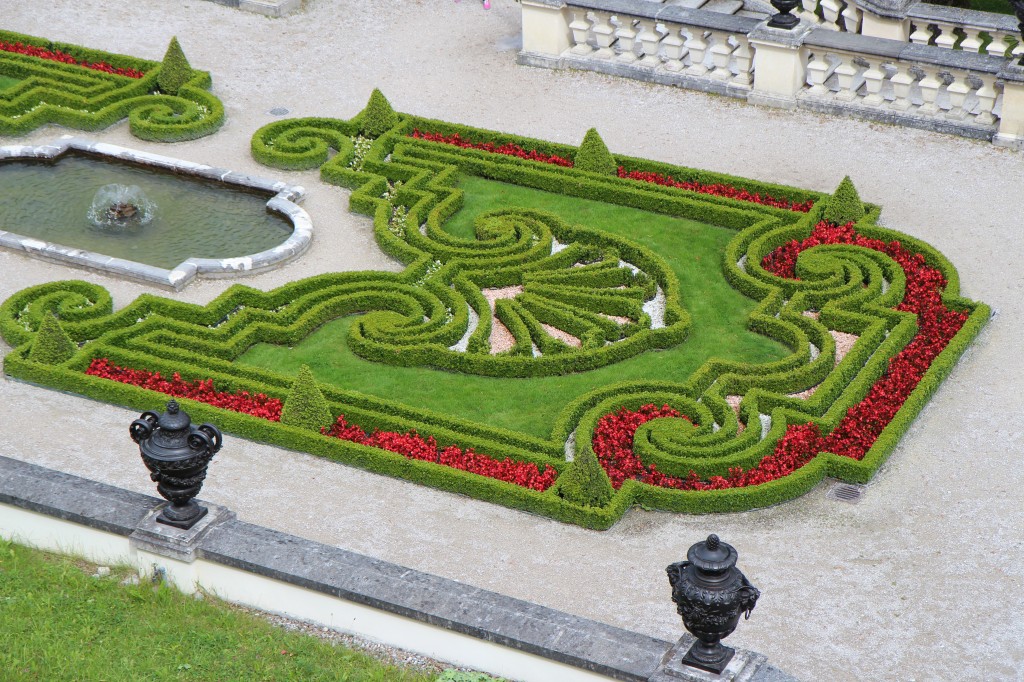 Check out the clan in the lower right of this photo.

Ana says, “Linderhof was his most royal castle.”

You’ve gotta know you’re padding your resume for later being known as ”mad” when you build a grotto, complete with electrical waterfall, for your own private opera screenings.  Yes, that’s a miniature ship in the lagoon.  King Ludwig loved Wagner’s operas.  Powering this grotto’s lights (and heating the water) was the reason the first electricity was generated in Bavaria.  Sometimes he would have his servants paddle him around on that small boat in the lagoon. 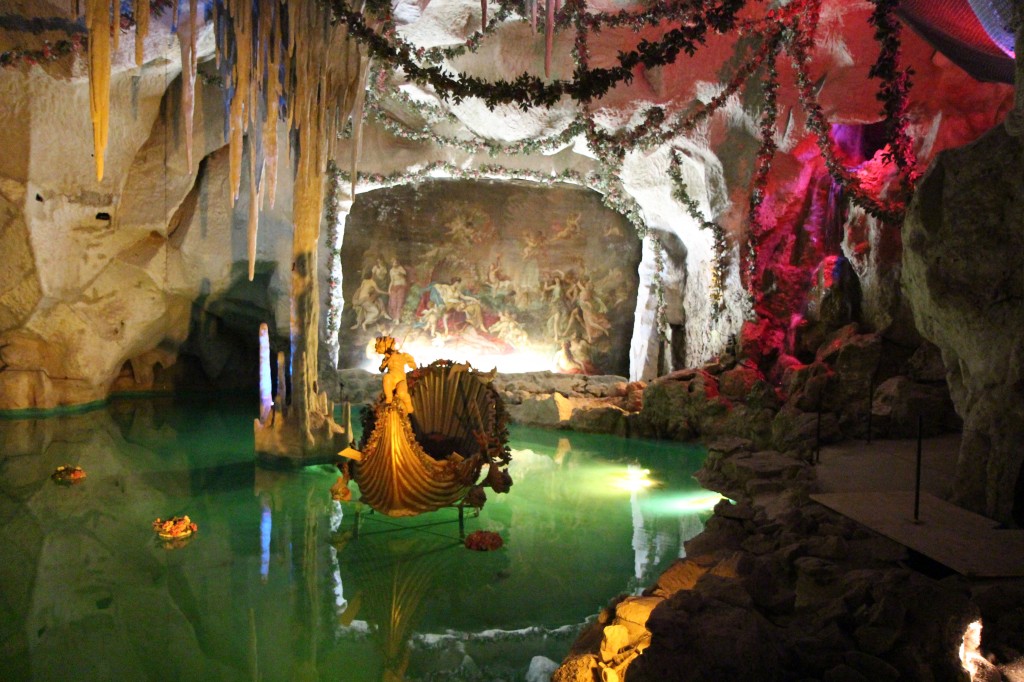 It sure brings into focus what those crazy colonists (and later the Europeans themselves) were rebelling against.  It makes you wonder how we ended up with leaders like George Washington.  He stepped away from public life when others with his reputation, power and fame were doing all they could to keep a tight grip on it.

We drove over to visit the next Ludwig castle of Hohenshwangau.  This castle was first mentioned in letters in the 12th century.  It was a knights’ castle before the family bought it in the mid-1800s.  Ludwig’s father bought it and began to rebuild the dilapidated castle.  Its walls hold romantic murals of the deeds of the royal family and of leaders from the area. 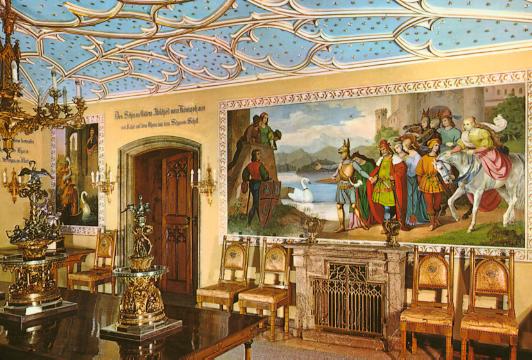 Once his father passed away, Ludwig moved into the king’s bedroom.  His bedroom still has the telescope pointed toward Neuschwanstein as he observed the ongoing construction for 17 years.  There are nude, bathing beauties on his bedchamber walls (and his father’s secret door to the queen’s room).   Ludwig was engaged at one time but never married.  He even had stars in the ceiling that actually illuminated at night. 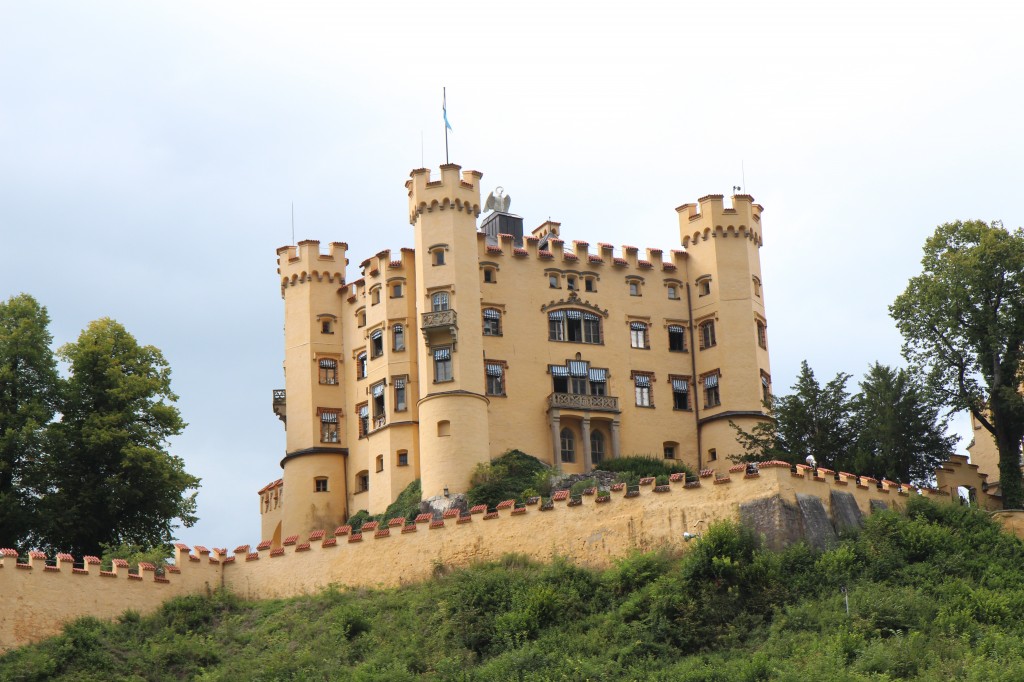 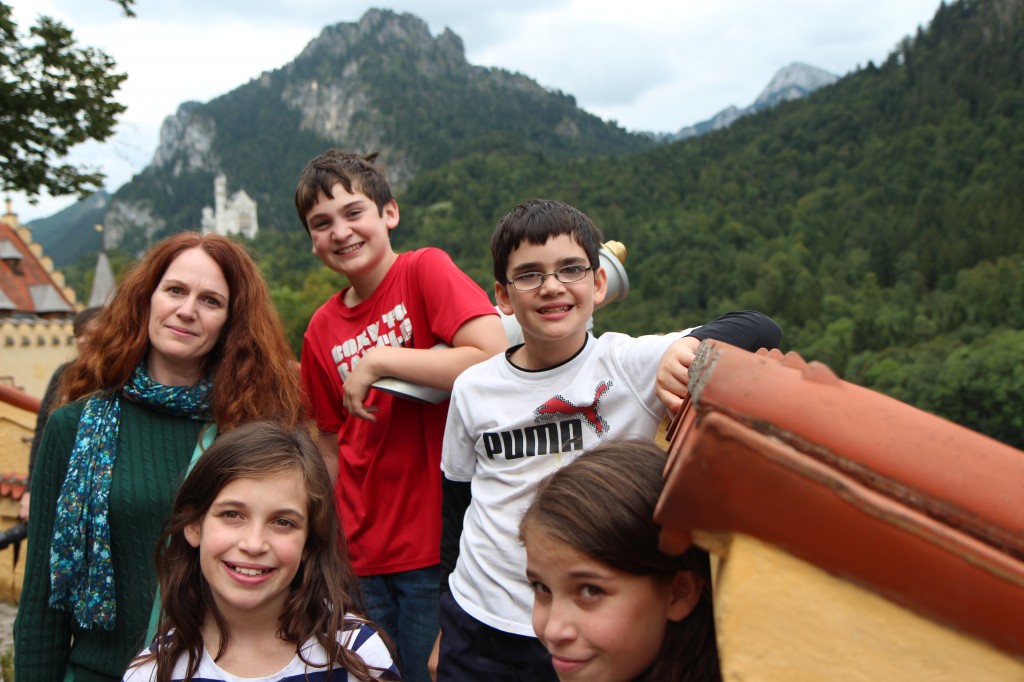 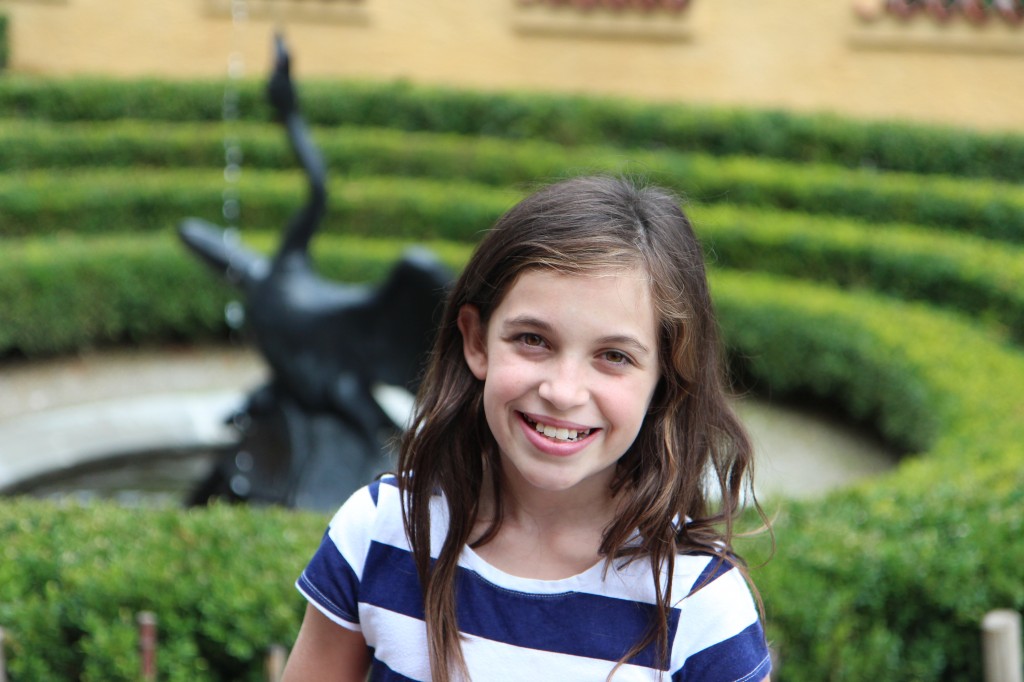 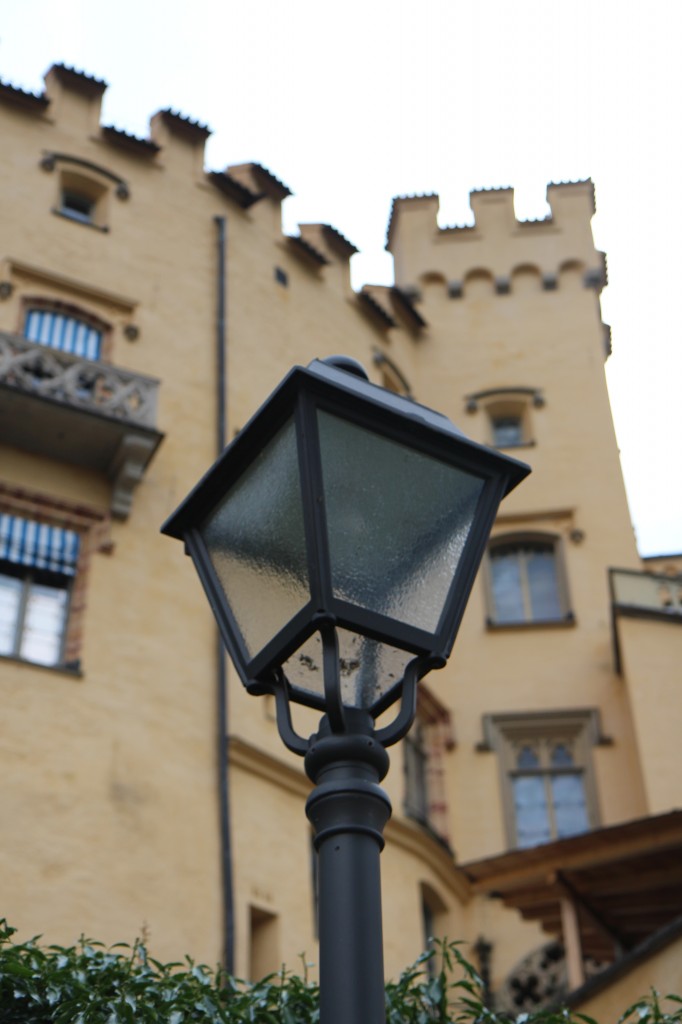 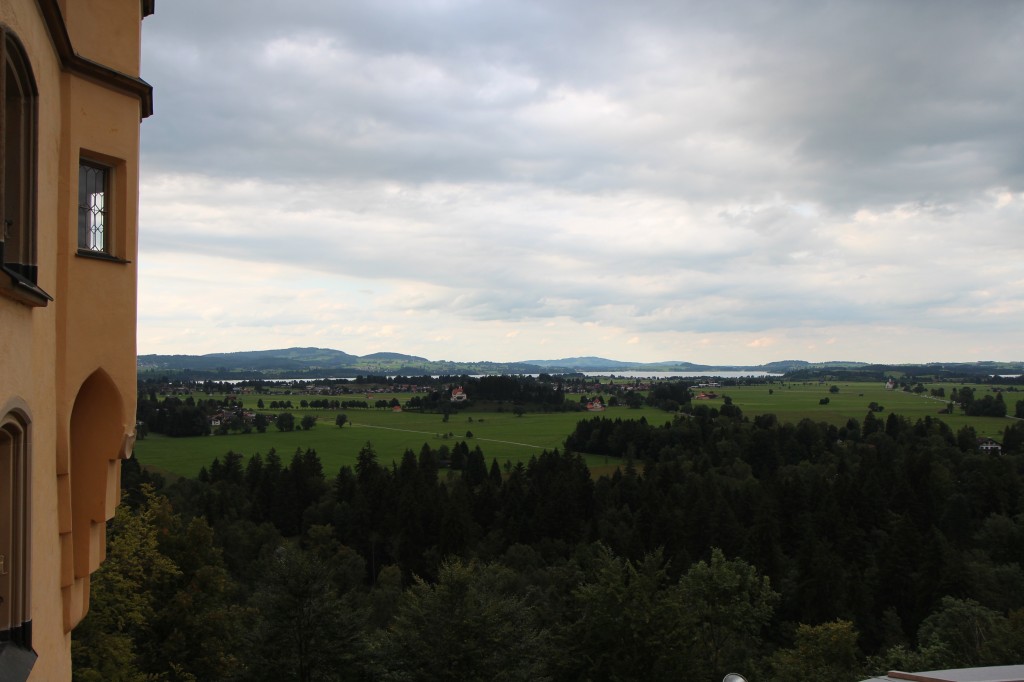 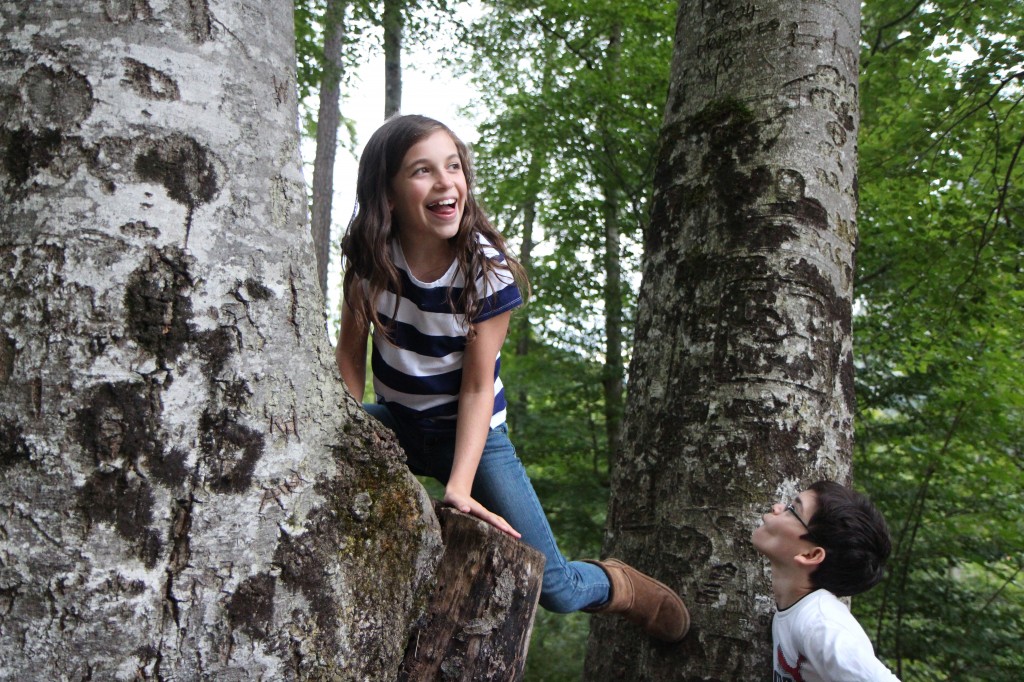 Tourists meander in the street amid a disorienting crush of fellow tourists, idling tour buses and horse drawn carriages at the visitor’scenter trying to get their tickets to Hohenschwangau and Neuschwanstein.  It is big business. 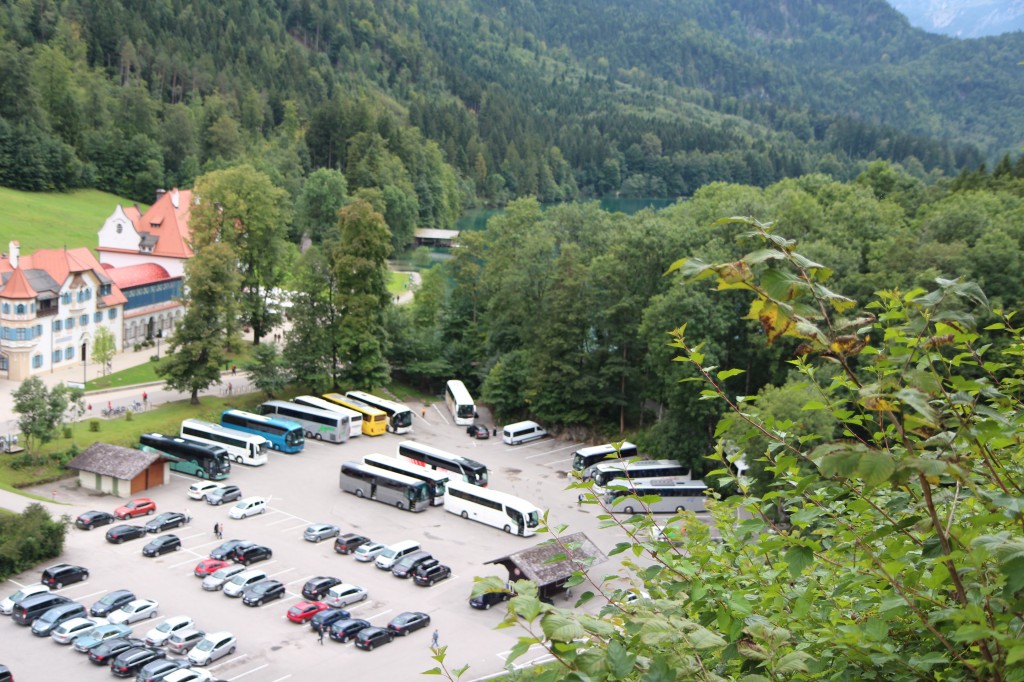 The family still lived in the Hohenschwangau gift shop building till the 1970s and they still own the castle. The tour was fast and short on details but the queuing system and ticket distribution was state-of-the-art.   The tourist dollars are flowing in to visit these works of art.

Ludwig did not finish the interior of the Neuschwanstein, because he only lived in it for 170 days.  To design the castle, he had the rough plans drawn up by a theater set designer, then taken to an architect.  He designed the latest technology of the day into the castle—running water, flush toilets, and auto-rotating spits for cooking.  He put so much of his personal funds into his simultaneous castle projects that he was constantly having to take out new loans.  As he neared insolvency, his creditors considering seizing the castles and Ludwig threatened suicide.

Neuschwanstein is one of the most popular tourist destinations in all of Europe with 1.3 million visitors a year, often more than 6,000 visitors each summer day.  Access is limited to 35 minute guided tours.  His last year of life was consumed by imagining and working on an even greater castle, Falkenstein.

In 1886, he was removed from power and was found mysteriously drowned in a lake a few days afterward.  The people of Bavaria were furious with his fiscal irresponsibility.  But within six weeks of his death, tourists were paying to go through the castle.  Ludwig’s younger brother had been ruled mentally ill years prior so the art of ruling fell to an uncle as regent.  The people of Bavaria still benefit daily from the tourism produced by these magnificent structures. 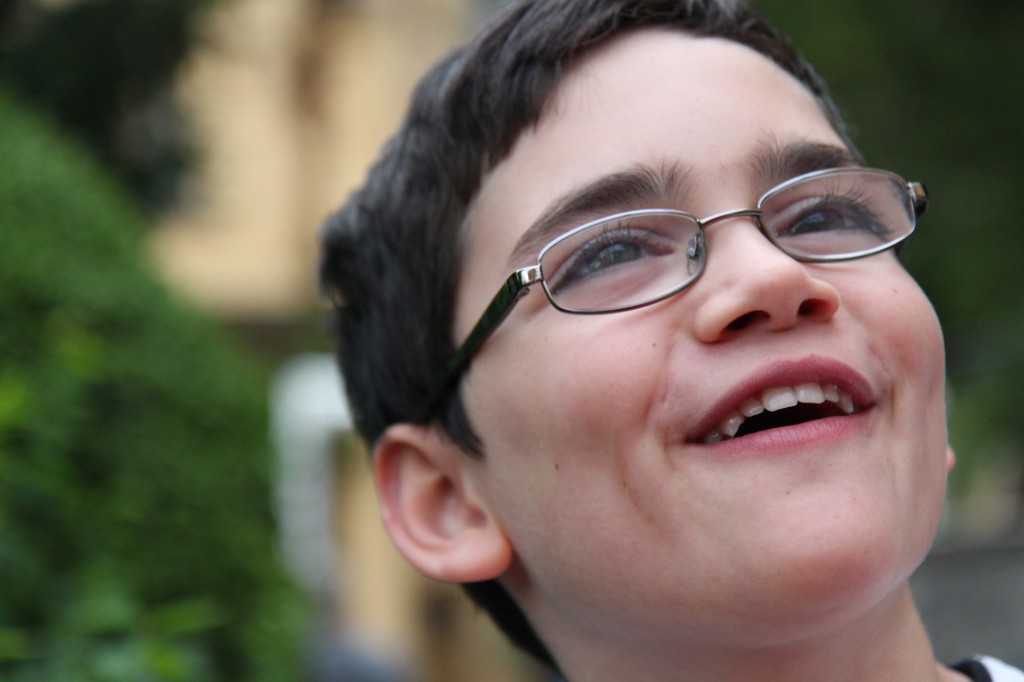 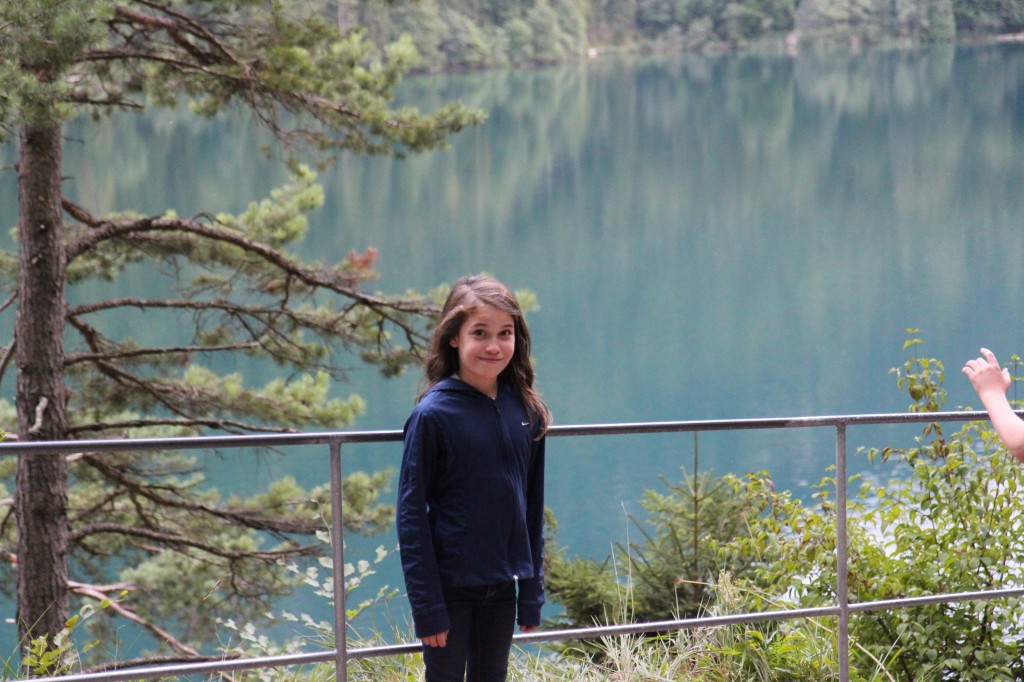