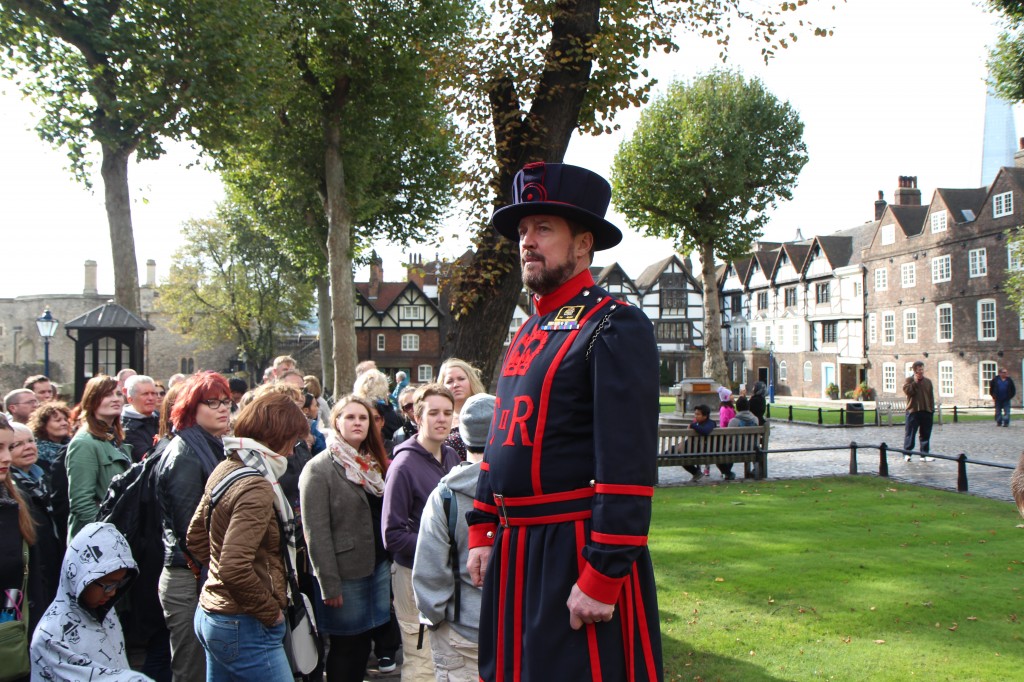 The Tower of London Yeoman Warders (“Beefeaters”) know how to show the tourists a good time.  The short Tower tour is clearly practiced, able to handle large crowds and showcases the strong voice and cutting jokes of the guards.

Each Beefeater is a retired senior NCO with at least 22 years of service and a Good Conduct medal.  They guard the tower and the crown jewels but also find themselves tour guides and the target for innumerable tourist questions.  We grabbed a quick picture with one of them before he could get away. 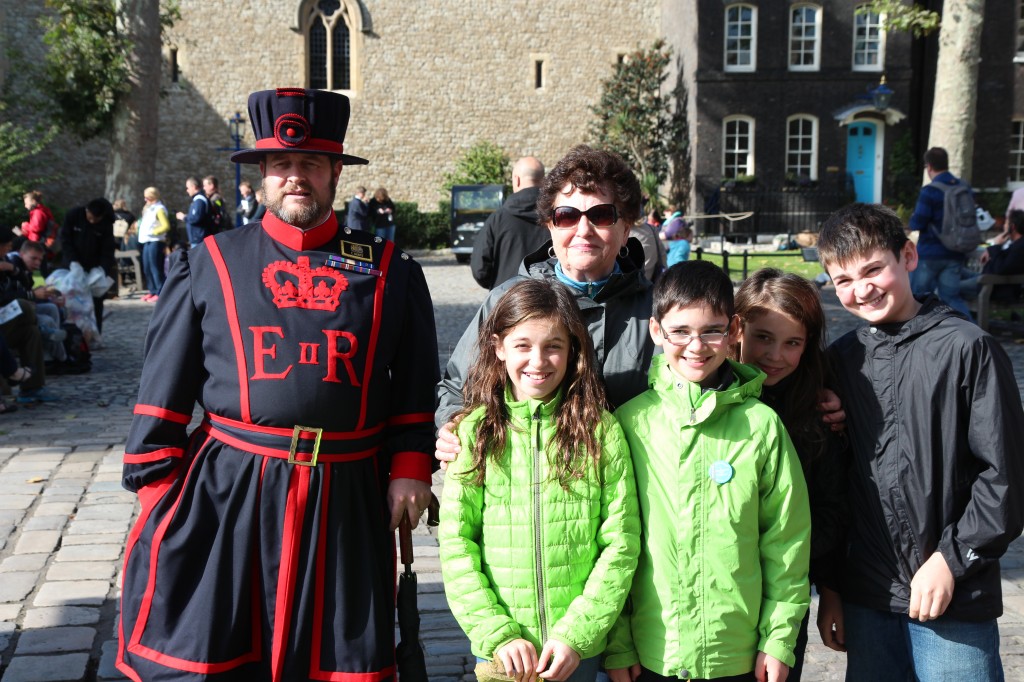 The “say hello to the Americans” crack was brought up as we all answered by nationalities.  The good ol’ USA was well represented, by the sounds of the shouts.

“Children, if you do get separated from your parents just find someone dressed like me and we’ll get you reunited with your parents.  If we cannot reunite you with your parents, you’ll need to go to the lost property office.  You stay there about 15 years then we make you join the Army.”

“The elderly may not have realized just how little time they have left, let’s hurry along now.  If they’re in your way just push them along.”

“History is written by those who win, which explains all the empty pages in French history books.”

The moat held polar bears for a time.  And if you are the King of France what do you give the King of England who has  everything?  Why, an elephant of course! 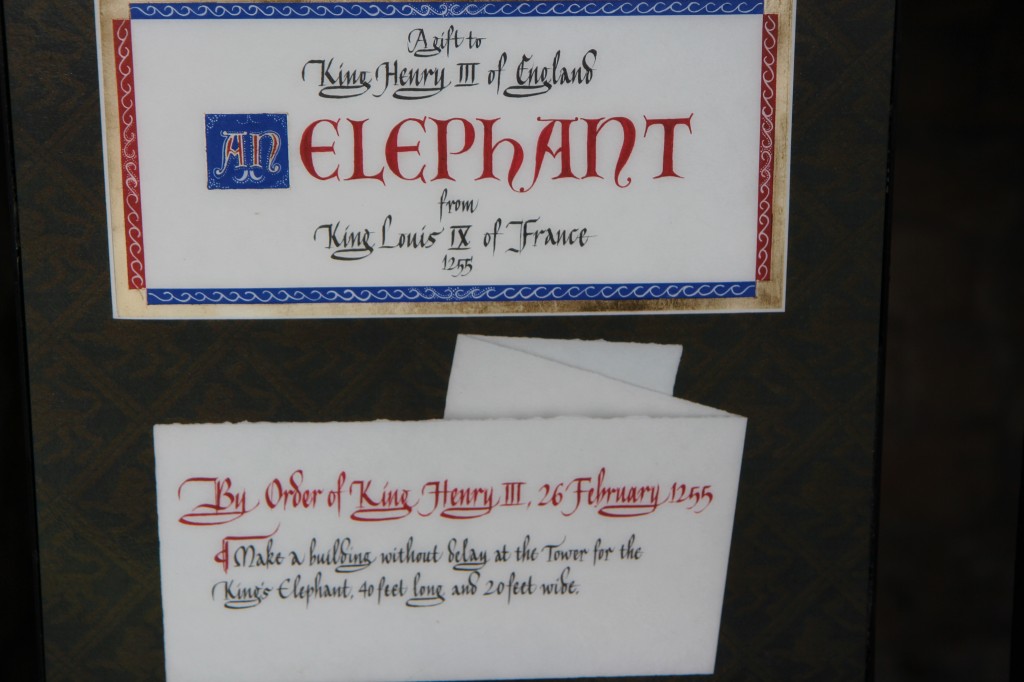 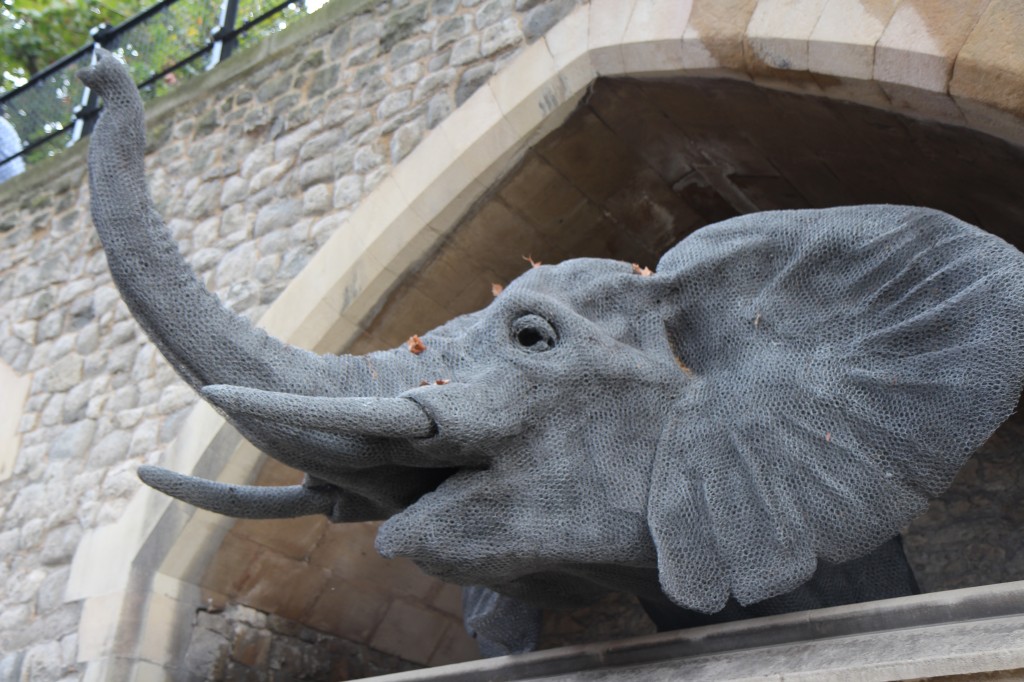 In honor of the WWI centenary, these actors cry out for volunteers to fight for their country as a period-dressed protester challenges their every claim. 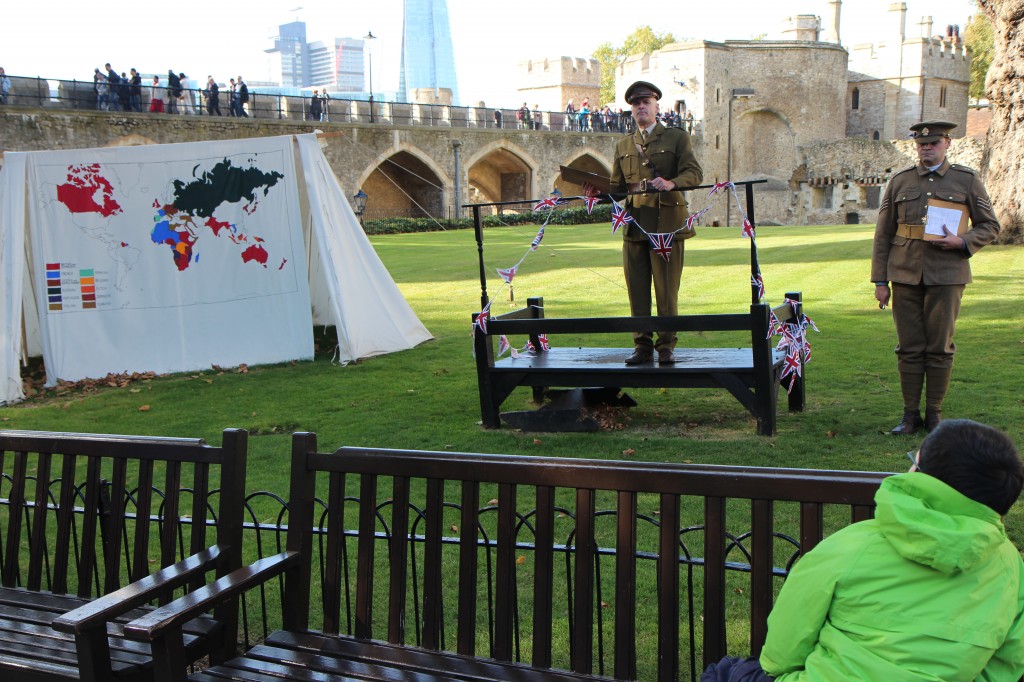 Legend has it that the monarchy will fall if the ravens leave the Tower of London.  One Beefeater is the raven master who cares for the ravens.  The birds eat raw meat purchased for them from a nearby market and have their feathers trimmed so they cannot fly long distances.

Volunteers in the moat place 888,246 individually crafted ceramic poppies to commemorate each British and colonial life lost in World War One.  2014 marks the centenary of the beginning of the War.  Every poppy made its way to buyers who snapped them all up. 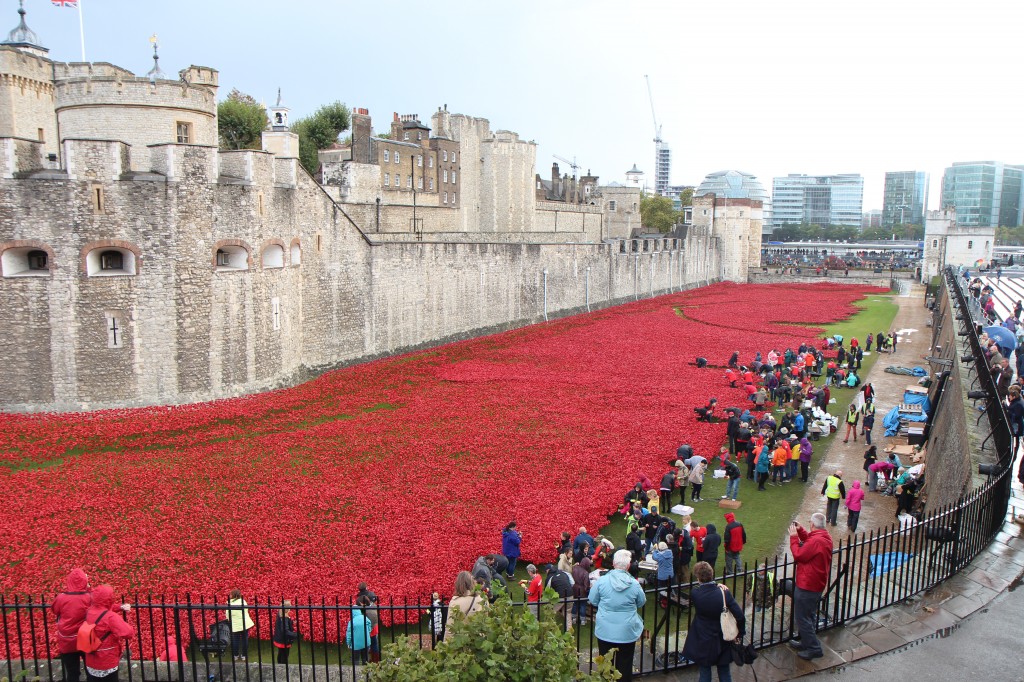 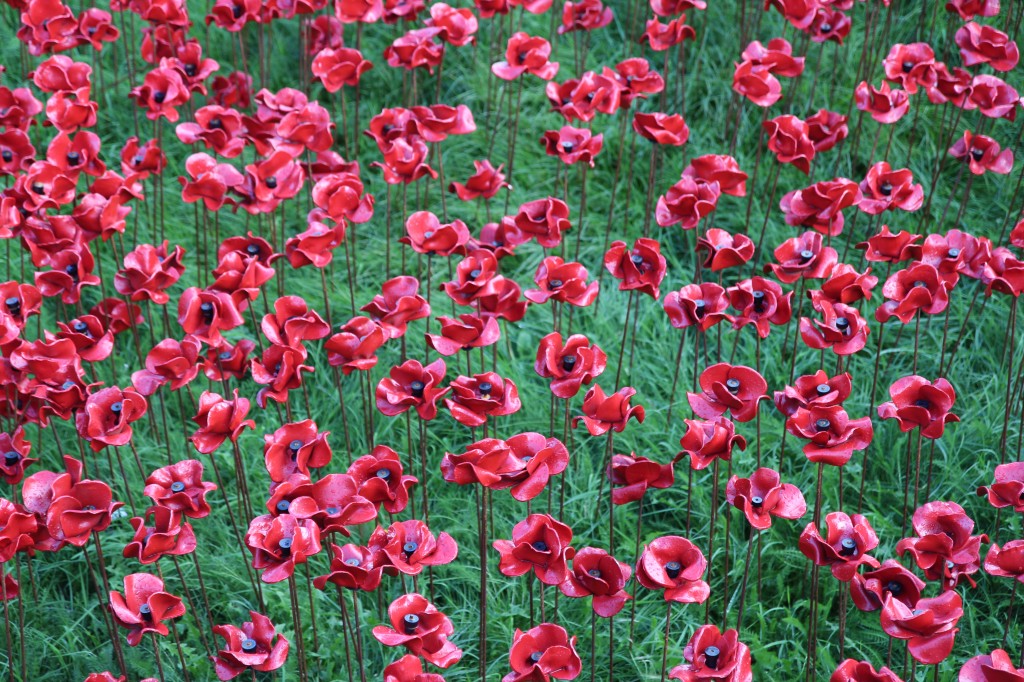 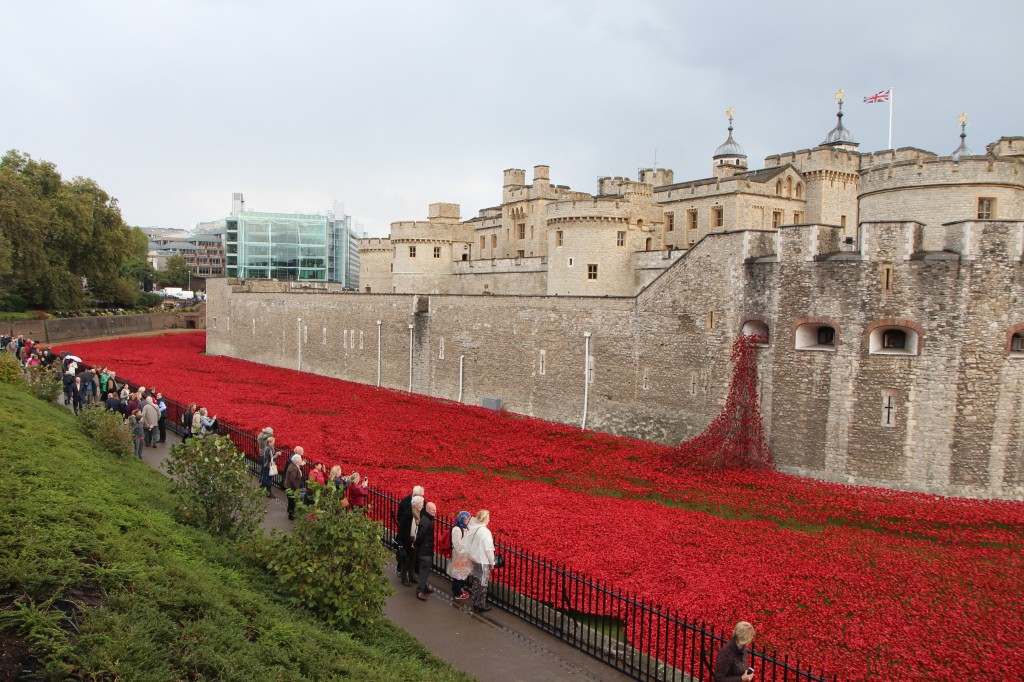 Though I’ve been here before, it feels so strange to be walking around where so much evil happened.  Born in bloodshed, the Tower was erected in 1078 by William the Conqueror to subdue the Londoners.  In one of the Tower’s darkest days, the two young princes—heirs to the throne—were found dead beneath a stairwell.  The traitor’s gate allowed the entry of traitors to the crown directly from the river  Thames which was more secure. 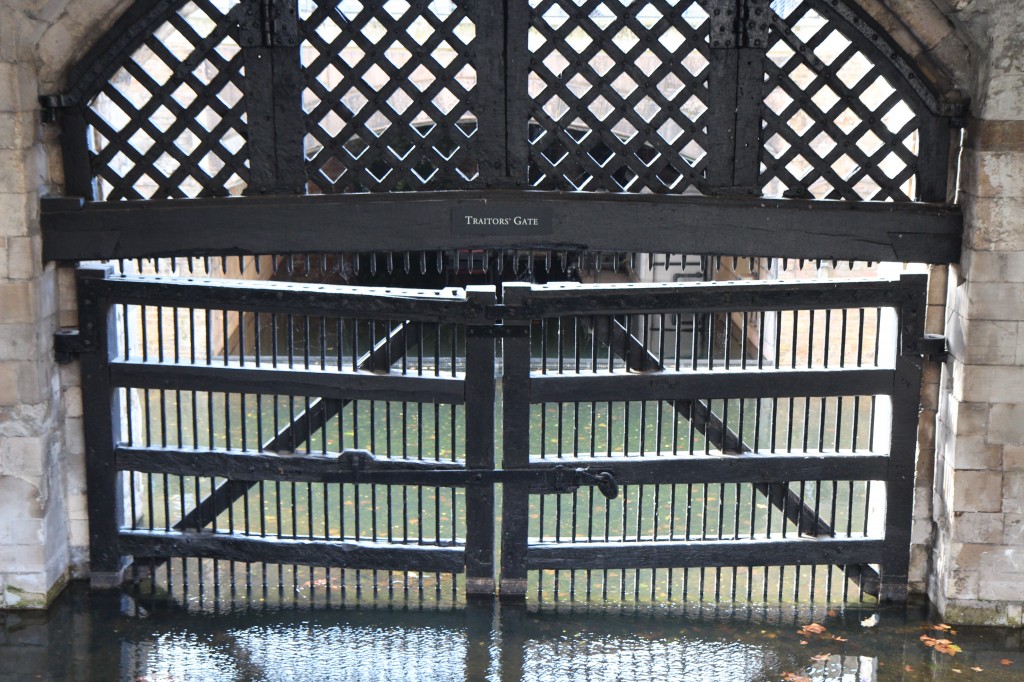 The painting “The Execution of Lady Jane Grey” (Paul Delaroche) at the National Gallery depicts the awful scene.  A political pawn between warring sides, Lady Grey reigned as queen for only nine days in 1553 before being deposed by supporters of Catholic Queen Mary.  Lady Jane was beheaded at Tower Hill early the next year at age 17.  Told that her head would be taken off after she put it down on the block she failed to find it due to being blindfolded.  She exclaimed, “Where is it  What shall I do?” until being guided to the block by another.   The executioner looks on with the axe and the red tights. 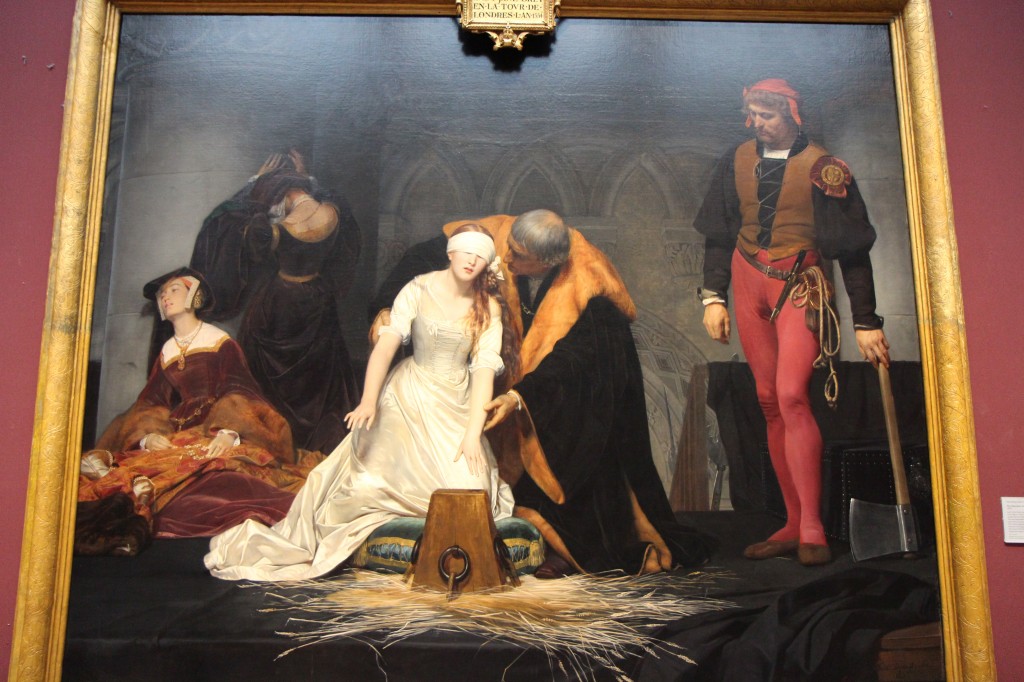 Queen Anne Boleyn was beheaded in the courtyard here, as was another of Henry VIII’s wives—Catherine Howard.

William Wallace (aka Braveheart) was likely brought in via the Traitor’s Gate, though he’d been knighted by Scotland.  During his execution in 1305, he was brought to the Tower, stripped naked and drug through the streets to nearby Smithfield.  There, his captors hung him till nearly dead then brought him down so he’d experienced that terrible feeling of choking to death. He was disembowelled before his head was cut off and he was divided into pieces that were sent to the corners of the English kingdom as a warning to others.

To see the crown jewels you walk past the Queen’s guard defending them by walking back and forth with taps on his shoes and an impressive rifle with bayonet attached. 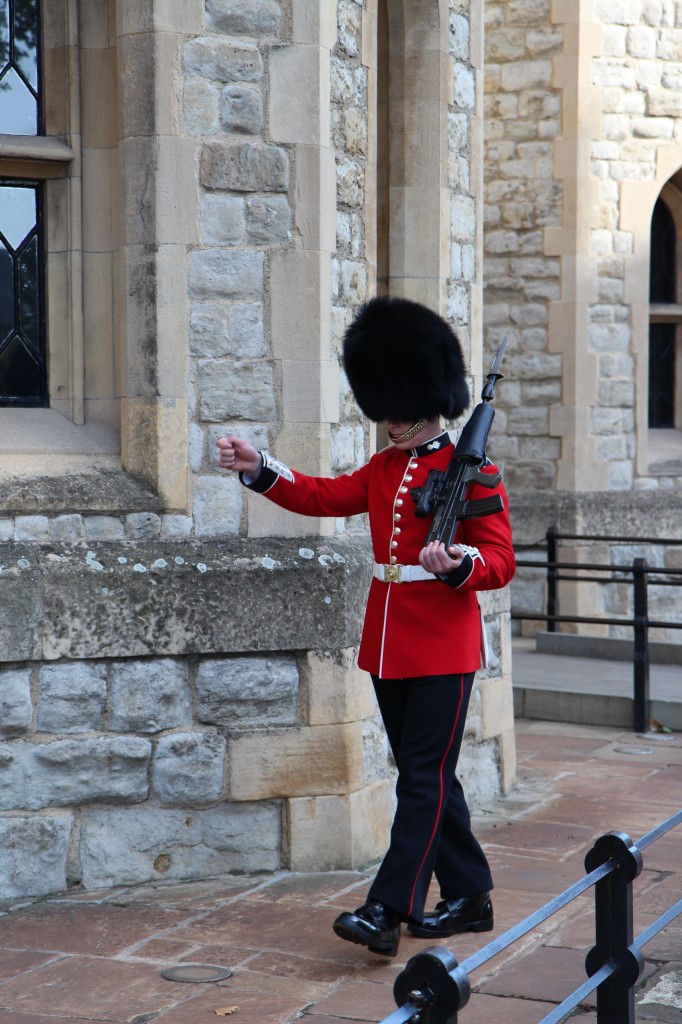 Then, inside, you step onto a moving platform so that everyone has an equal shot at gawking.  No photos allowed.  Here are just a few of them. 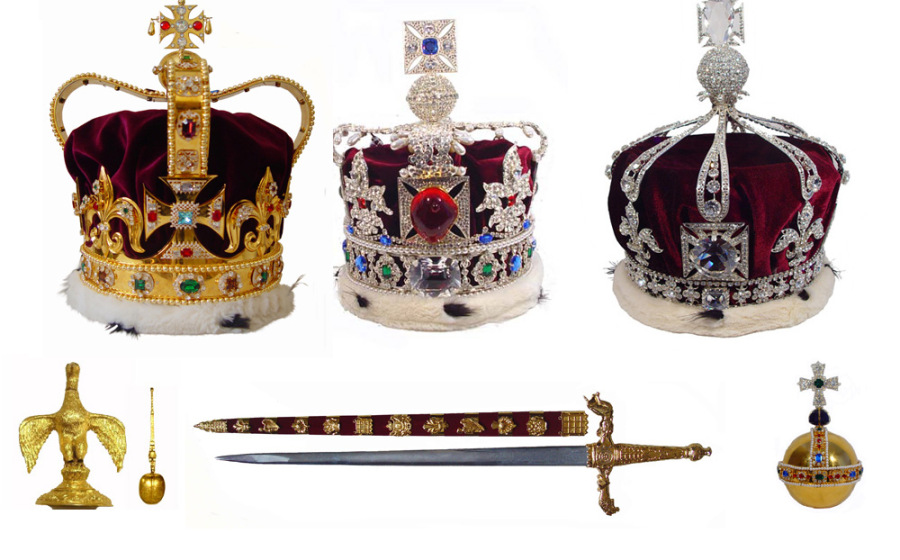 Queen Elizabeth II wearing the crown and holding the scepter and orb at her coronation in 1953. 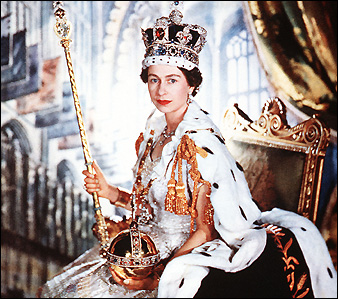 She still wears the crown every year when she addresses Parliament. 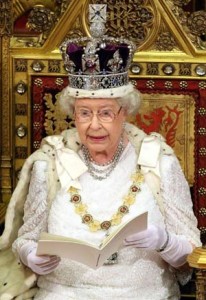 In the treasury inside we get this gander at the executioner’s axe and block.  Note the concave portion for holding heads in to better get at the neck. 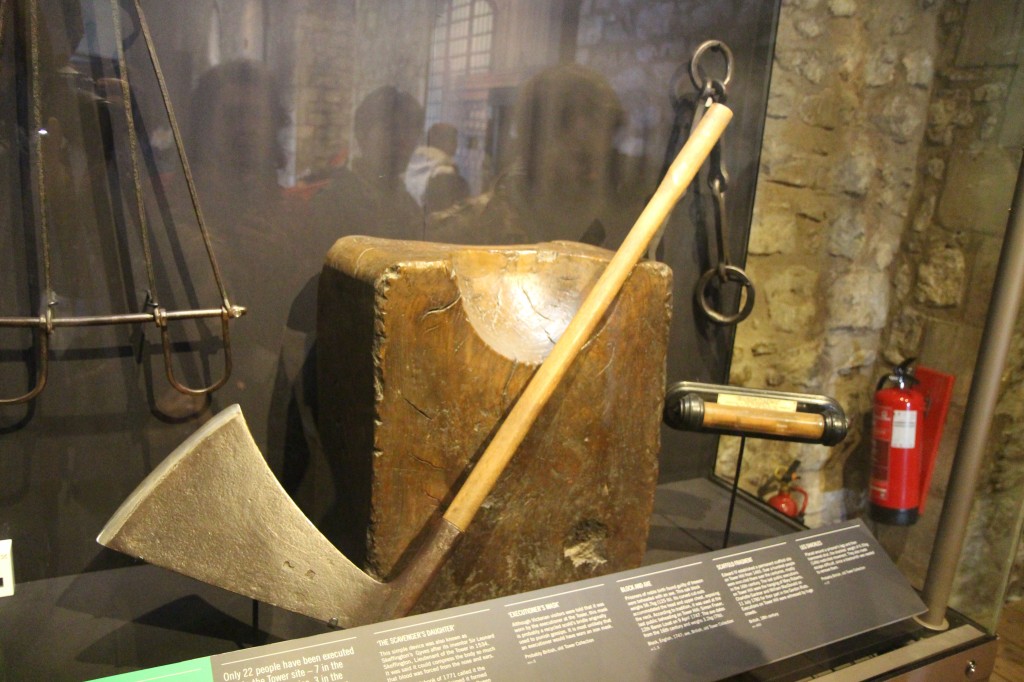 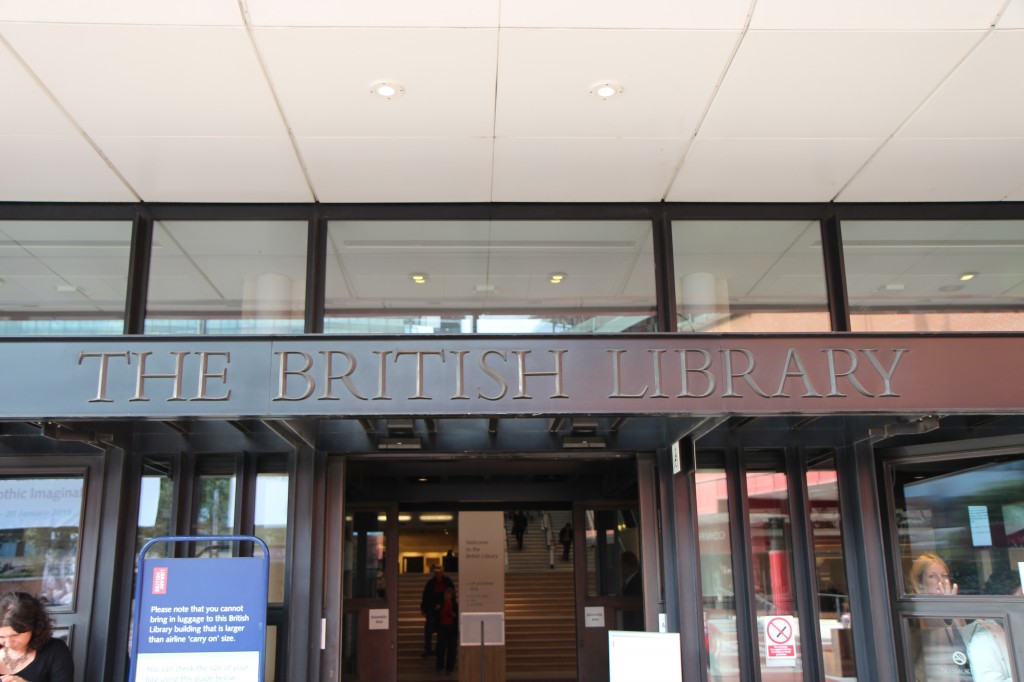 Original Da Vinci notebooks and drawings, alongside Michelangelo sketches and Shakespeare’s notes under glass.  We feasted our eyes on a 1215 copy (one of the four surviving) of the foundational Magna Carta with its wax seal and admired its Latin script. 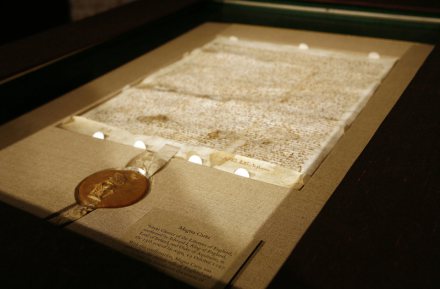 From the British Library’s website, “The Codex Sinaiticus is one of the most important books in the world. Handwritten well over 1600 years ago, the manuscript contains the Christian Bible in Greek, including the oldest complete copy of the New Testament. Its heavily corrected text is of outstanding importance for the history of the Bible and the manuscript – the oldest substantial book to survive Antiquity – is of supreme importance for the history of the book.”  It’s amazing to see the scholar’s strikeouts and notes in the margin. 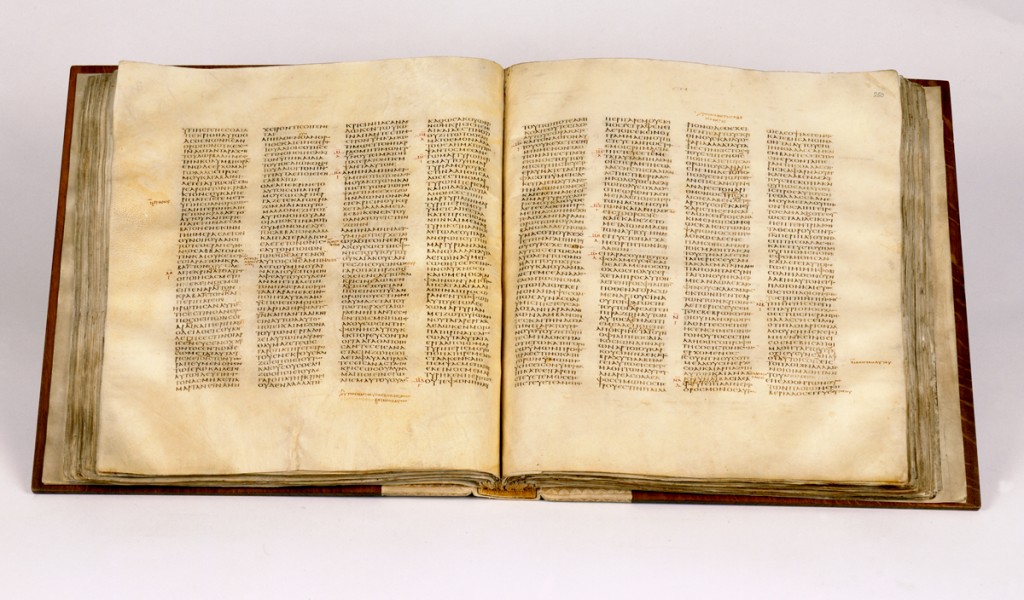 A Gutenberg Bible shines in the dim light as do some of the earliest known copies of the Koran.  But nothing seems to attract the attention of the handwritten lyrics of the Beatles across the room.  Along the masterpieces, we see John Lennon’s notes on the lyrics to “In My Life” and his son’s birthday card that was grabbed to jot down the lyrics for “A Hard Day’s Night.” 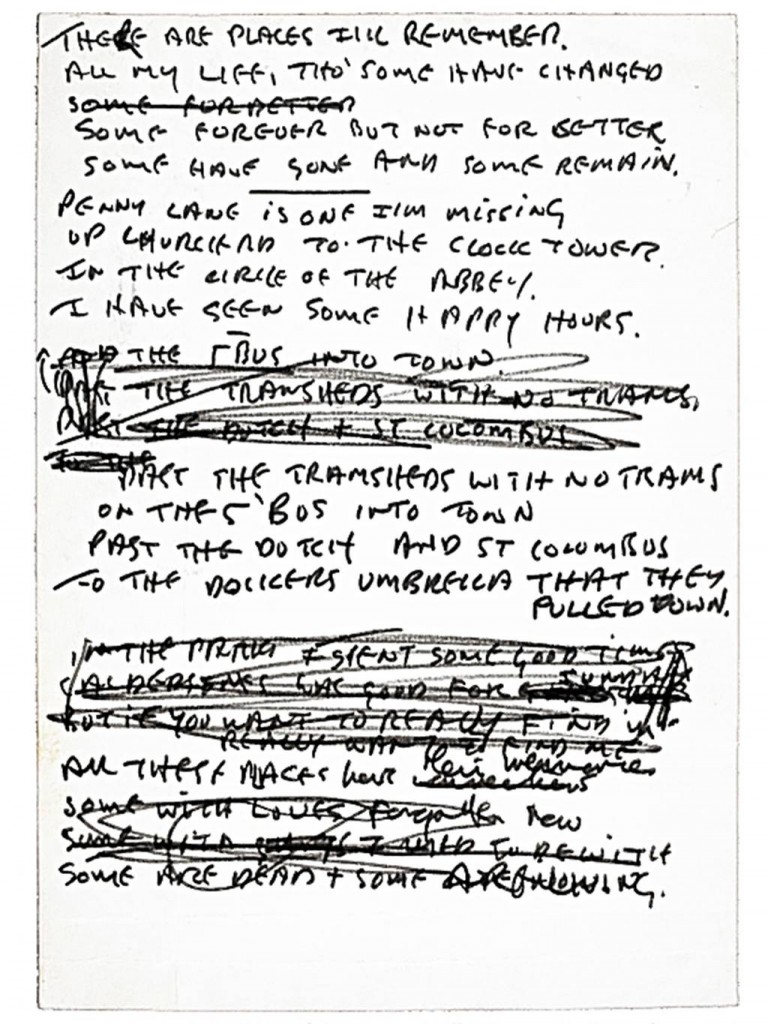 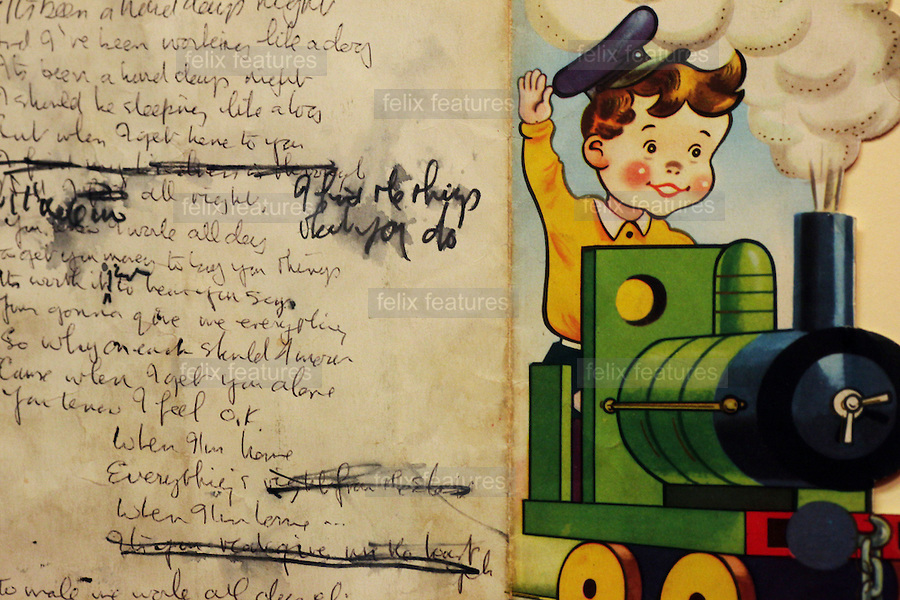 We feel so fortunate to meet a kind American, Edane, at the local Wimbledon church.  The church was planted in the area at the direction of Charles Spurgeon and we attend one Sunday on “Nations Sunday” as about 15 people get up to recite a bible verse in their original language. Edane invites our whole family to see where he works because he thinks the kids will like the aquariums.  He is right!

Edane works at Bloomberg in London’s financial district.  The kids are blown away by the free snacks, tea and fruit—“they even have ice cream Dad!” 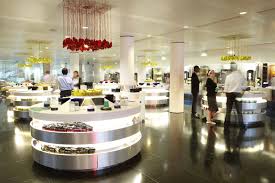 There must be 12 different, enormous aquariums across the different buildings and we hunt the eel in the large tank by the front door. 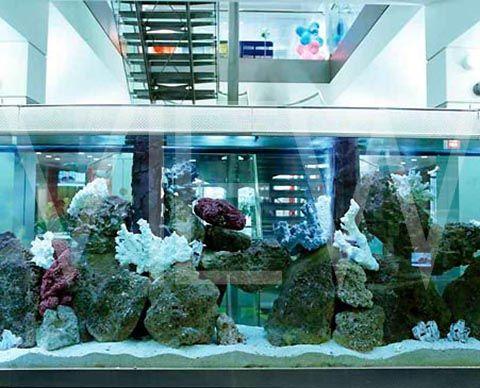 We see the desk that Michael Bloomberg works at when he’s in town.  Everything is out in the open or protected only by clear glass as the company ascribes to a notion of transparency in all they do.  No corner offices here.  No pictures either but I was able to find a few to show you.  We get to sit in the actual seats of the Bloomberg TV studio in London. 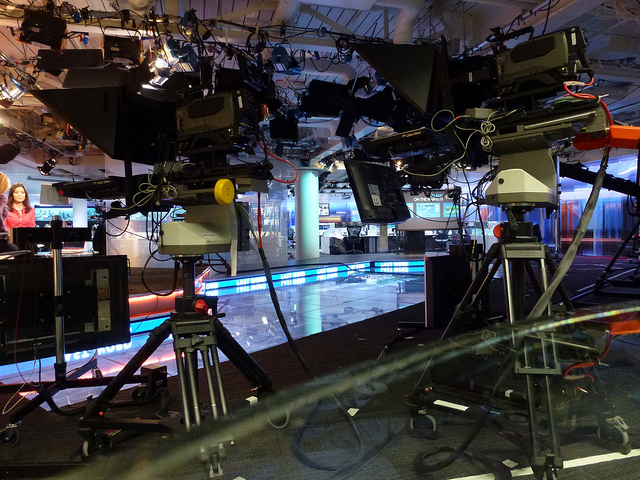 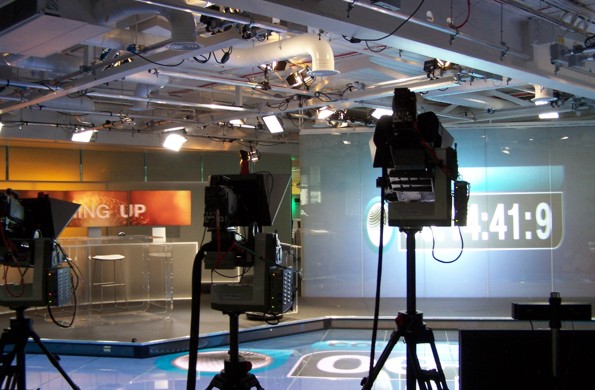 Edane explains about the different Bloomberg offices that pick up the Bloomberg channel as the financial markets wake up around the world—New York, London, Hong Kong.  Recycled office materials have been given to local artists who’ve returned fascinating artwork to the building.  The kids decide they want to work for Bloomberg.  I think I do too.  Thank you Edane for the wonderful tour! 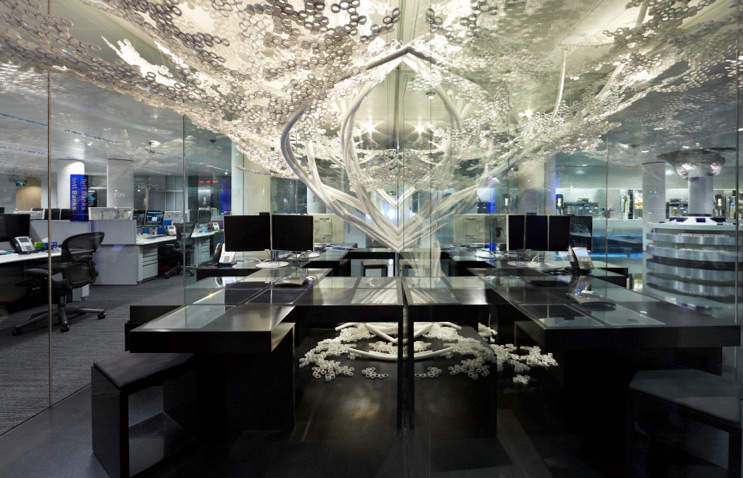 [Why wouldn’t you have a tree sculpture inside an office cubicle?  Looks beautiful to me]