In a comment, Becky asked a great question about how did we find North Berwick.  Apparently, the townspeople should have installed better tourist deterrents. 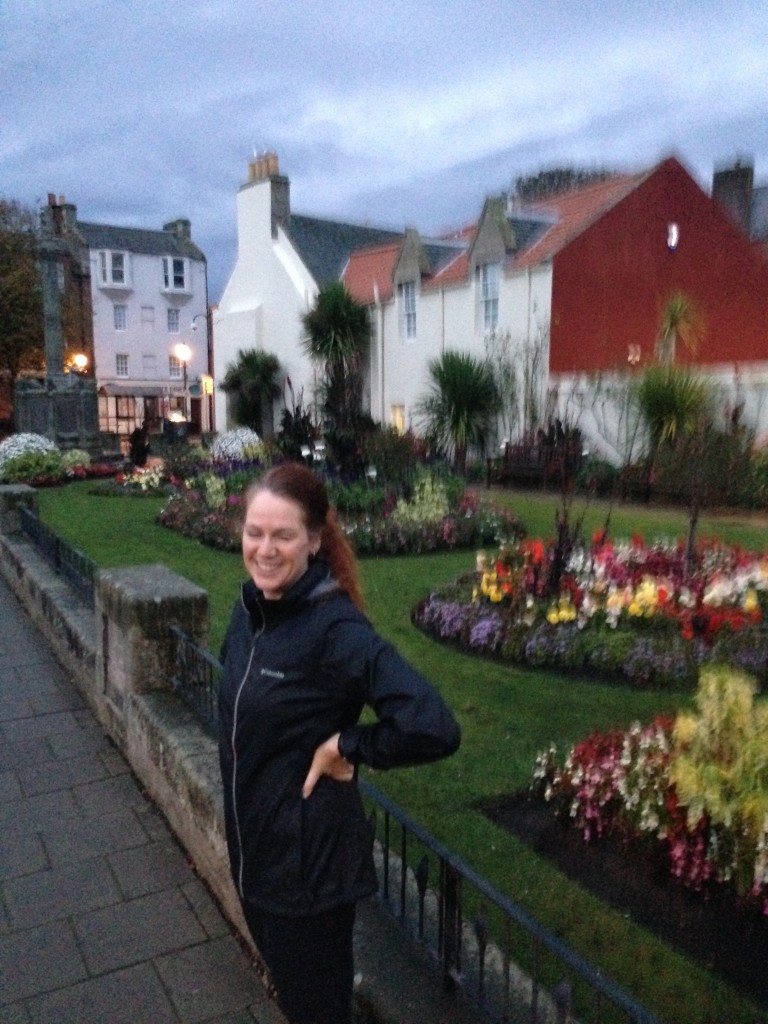 [quick shot of Lisa grabbing a run in North Berwick]

For this one, we wanted to stay in arm’s reach of Edinburgh but we find the kids, and the parents, prefer the slower pace and more open spaces of the smaller towns.  We get on the apartment websites such as HomeAway, FlipKey, AirBnB, Wimdu, etc and put in our criteria.  Price matters more than a little, and we are also looking for wifi, a washer (a dryer is usually too much to hope for and most of the Europeans seem to dry their clothes on a stand to avoid the high electricity fees) and a table that holds six Mesquits.  Time at the table matters for us. 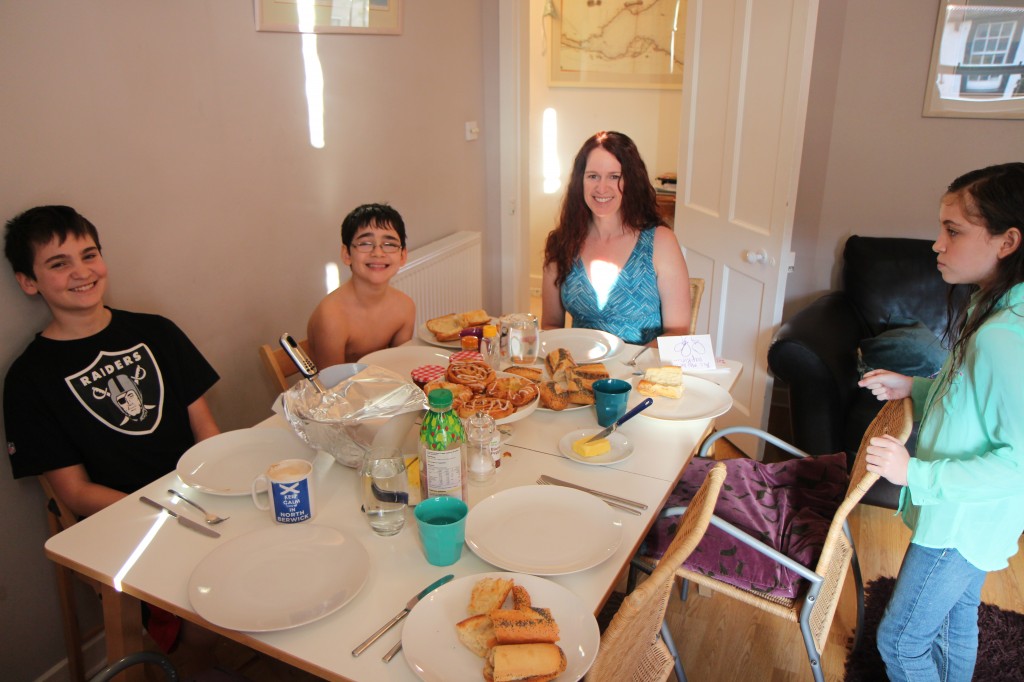 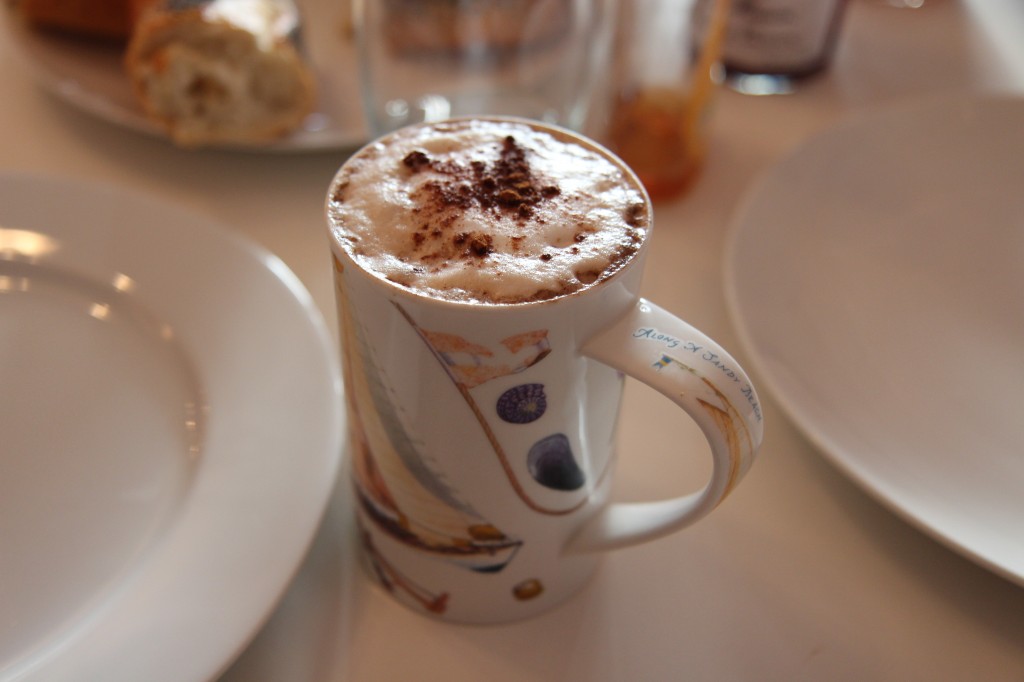 Oh yeah, six beds helps too.  Usually, it’s a two-bedroom place with a sofa bed in the living room.  We like decent access to public transit and a grocery store since we mainly cook ourselves (well, that’s the royal “we”).  Thank you, Lisa!  So we apply all this criteria, see what comes up and email the owners of our top three or four.  In this case, we ended up loving North Berwick so much that we didn’t go into Edinburgh nearly as much as we thought we would. 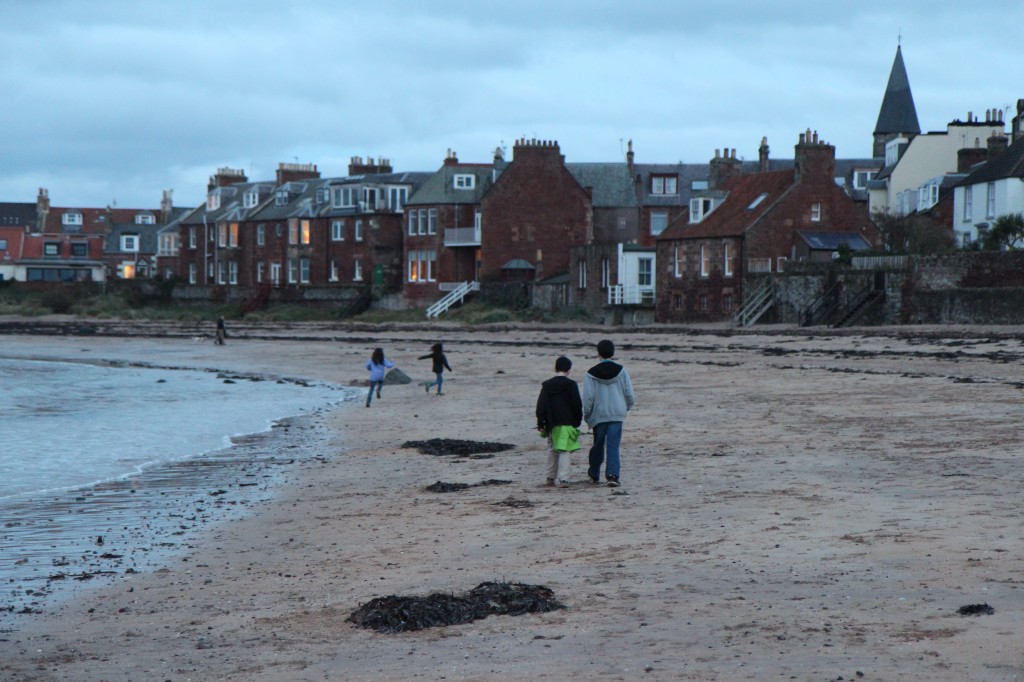 Check out this amazing spot to blog.  A coffee place right across the street from the ruins of a church and its graveyard. 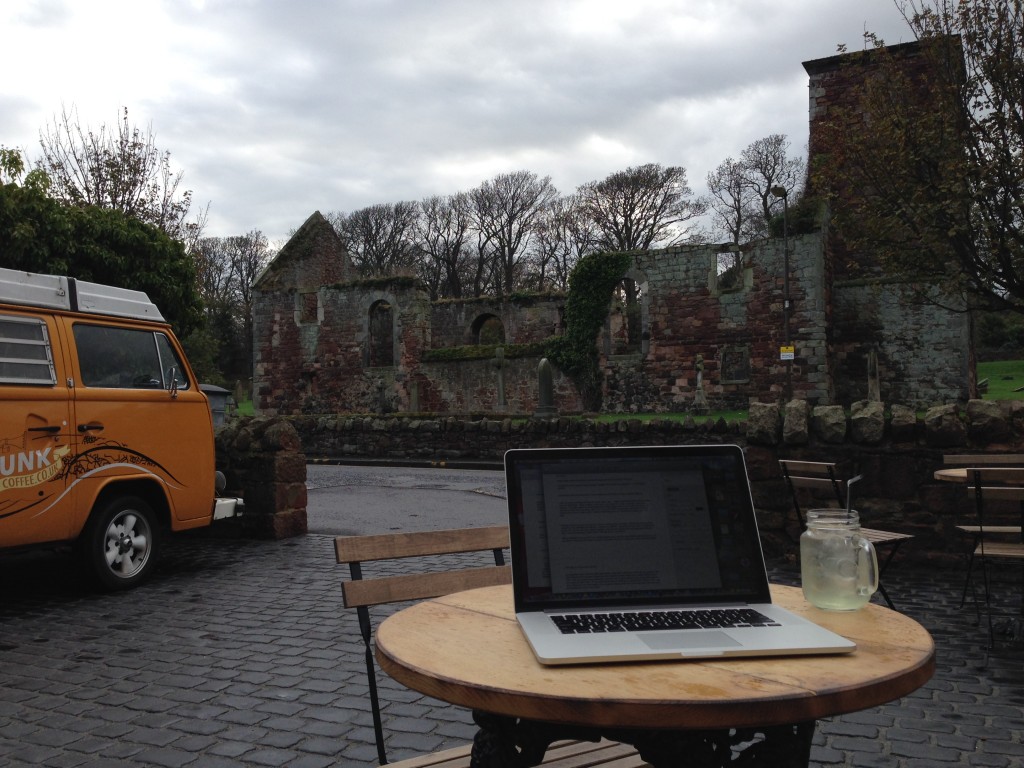 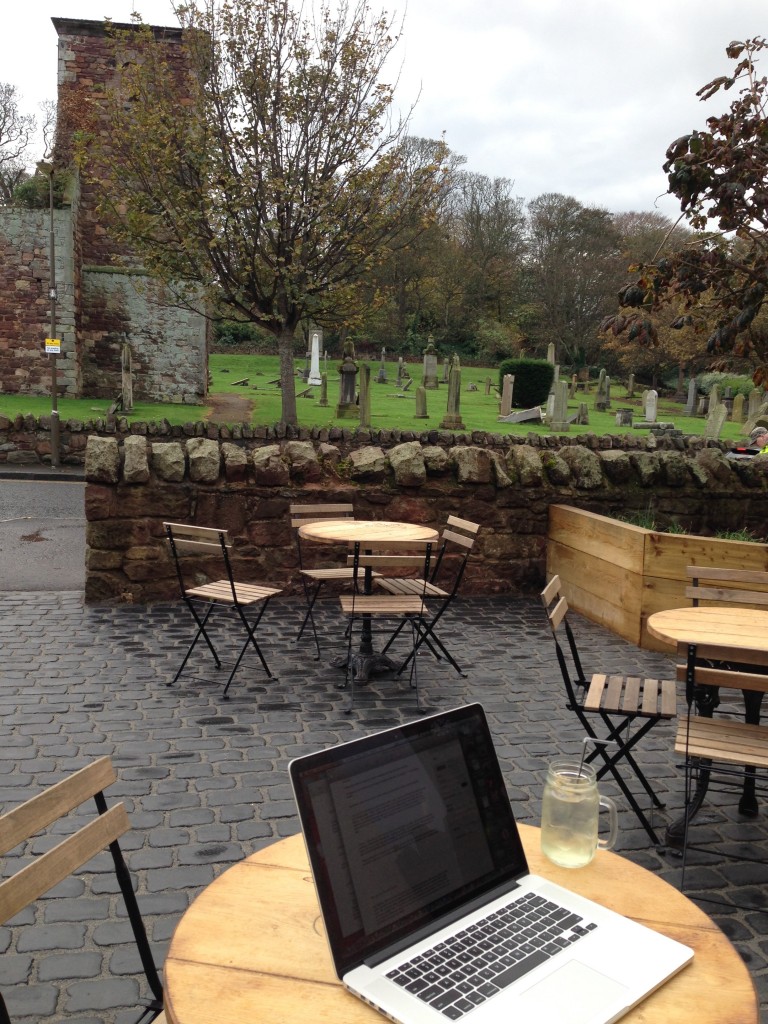 Paul and Stacy even invite us out with their friends to a bonfire on the beach for Guy Fawkes night fireworks.  If you recall, this is the night where the Brits gather to send up fireworks and celebrate the breakup of the gunpowder assassination plot of the king at Parliament by Guy Fawkes and others in 1605. 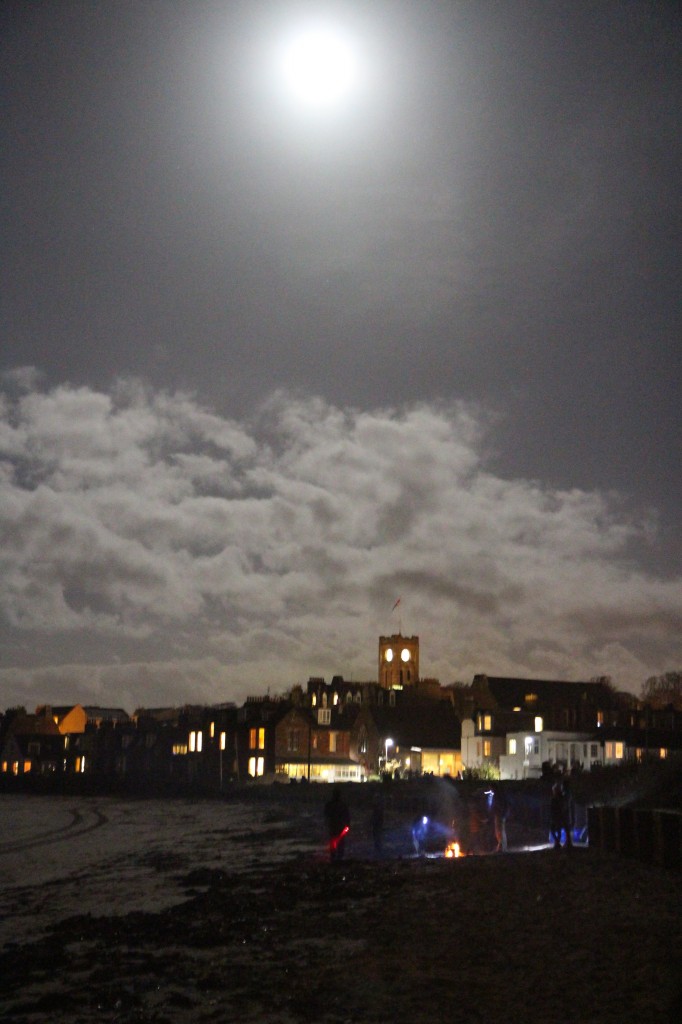 A friend of Paul and Stacy’s is sharing his flask full of warming whiskey.  Another friend is opening up one of the first frisbee golf courses in Scotland and we talk about that for a while.  He is overcoming a lot of golf ‘gravity’ here to get people to try an upstart sport.

Paul and Stacy make us feel at home here even though all we could find to bring from the Guy-Fawkes-night-picked-over grocery store are a bunch of Oreos to share. 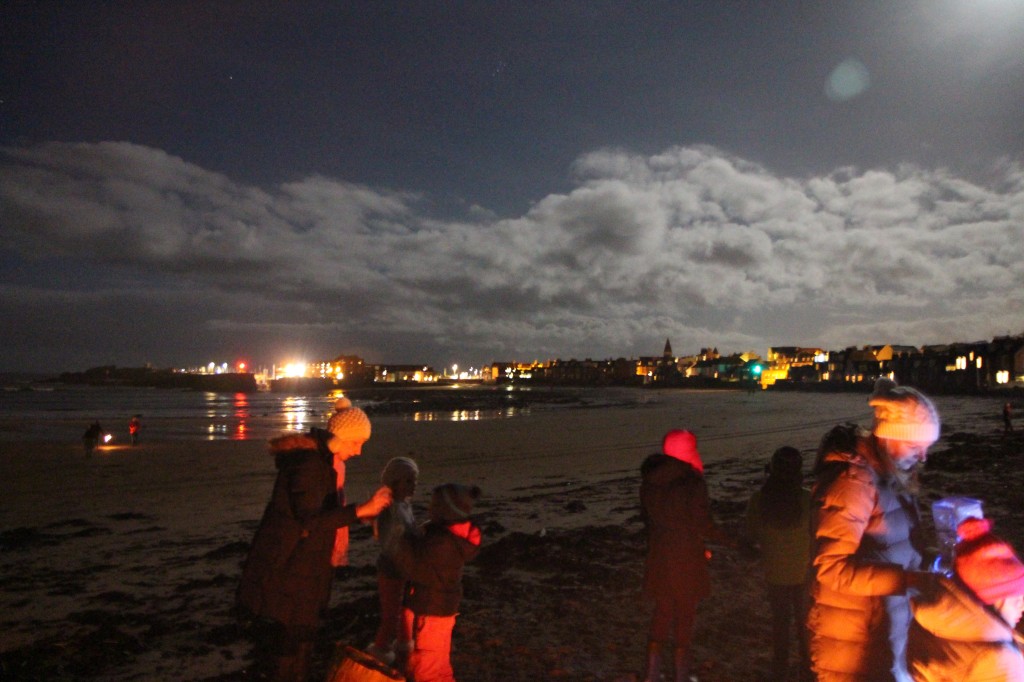 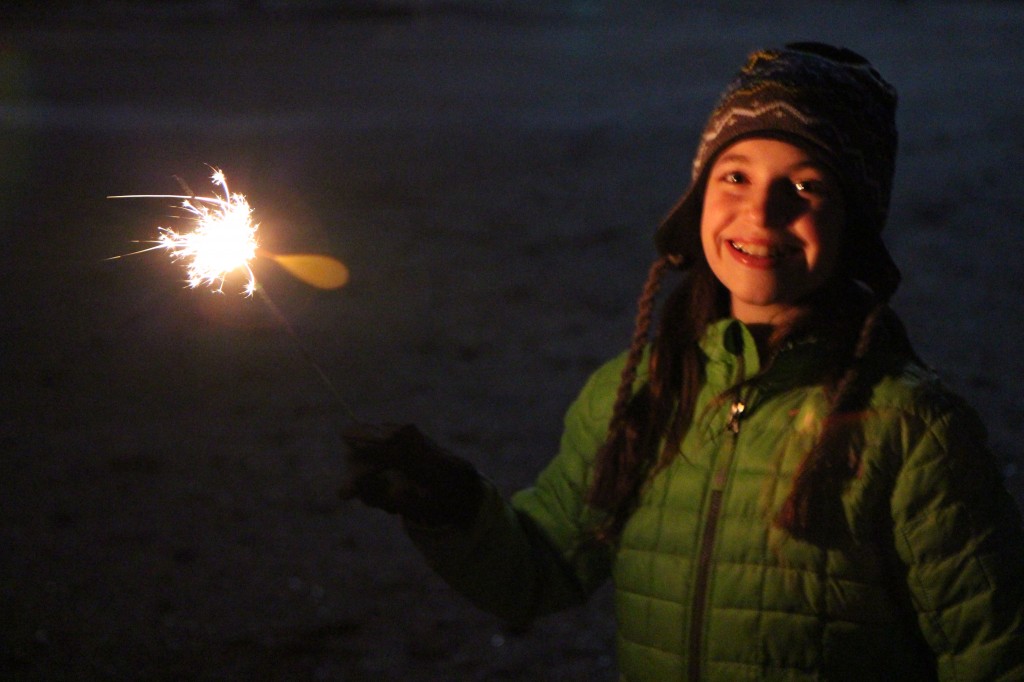 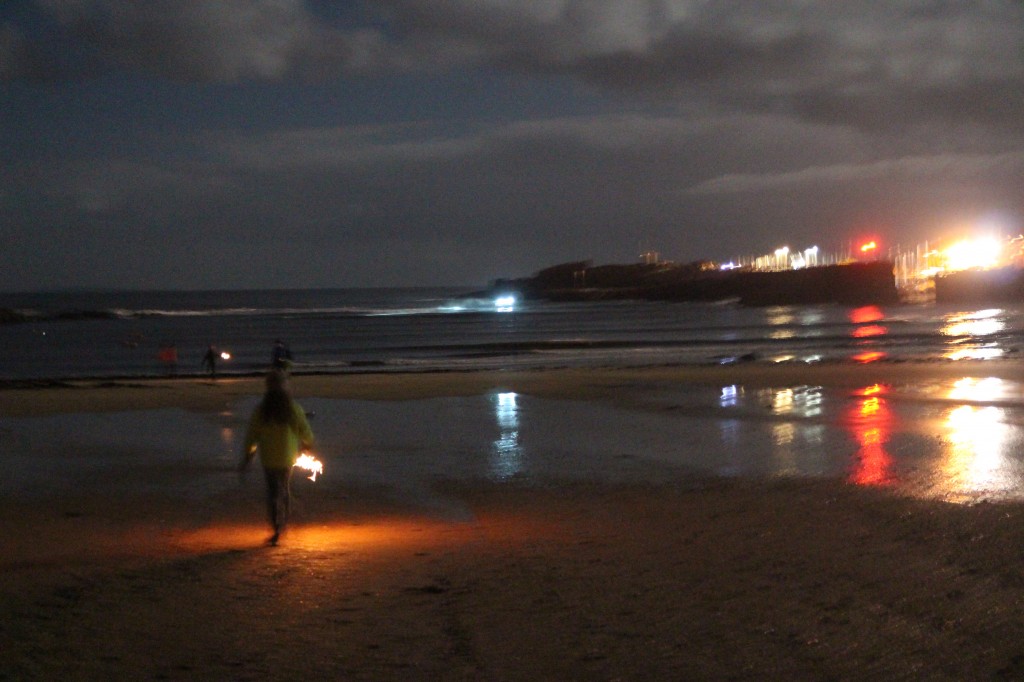 The s’mores-fueled kids gulp down the Oreos too and dash back across the sand slashing swaths of day into the beach night with their sparklers.

With the sometimes drizzle and overcast skies this time of year, North Berwick is the place to start knitting with your mom. 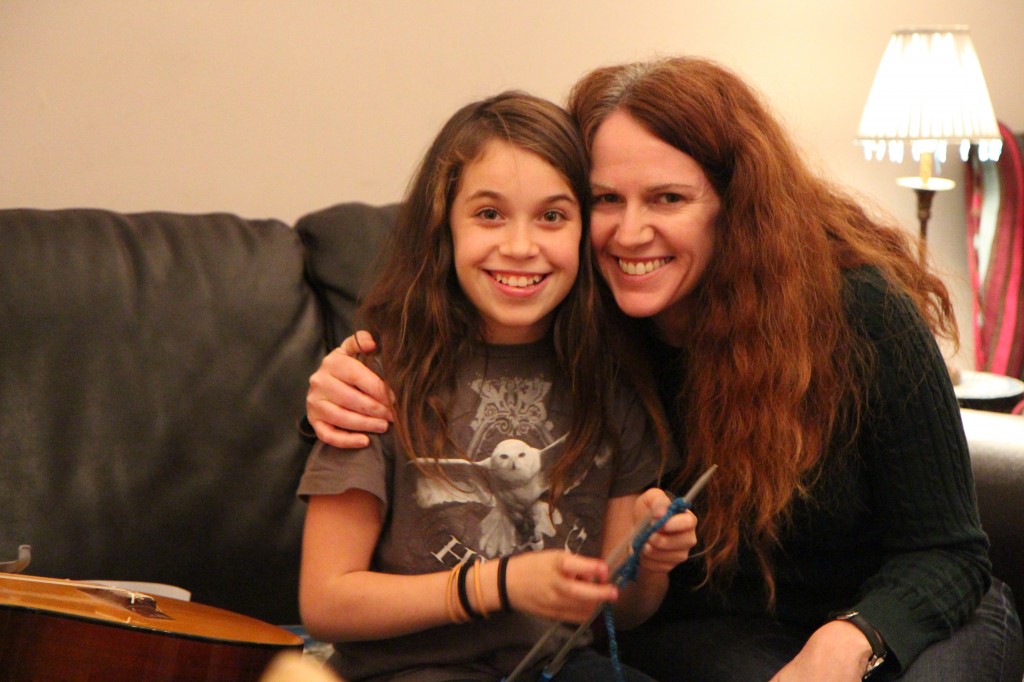 Lisa has been working on knitting a scarf for one of the boys and Ana joins in on the fun.

It is also the place to throw in some soap making from the arts and crafts place downstairs. 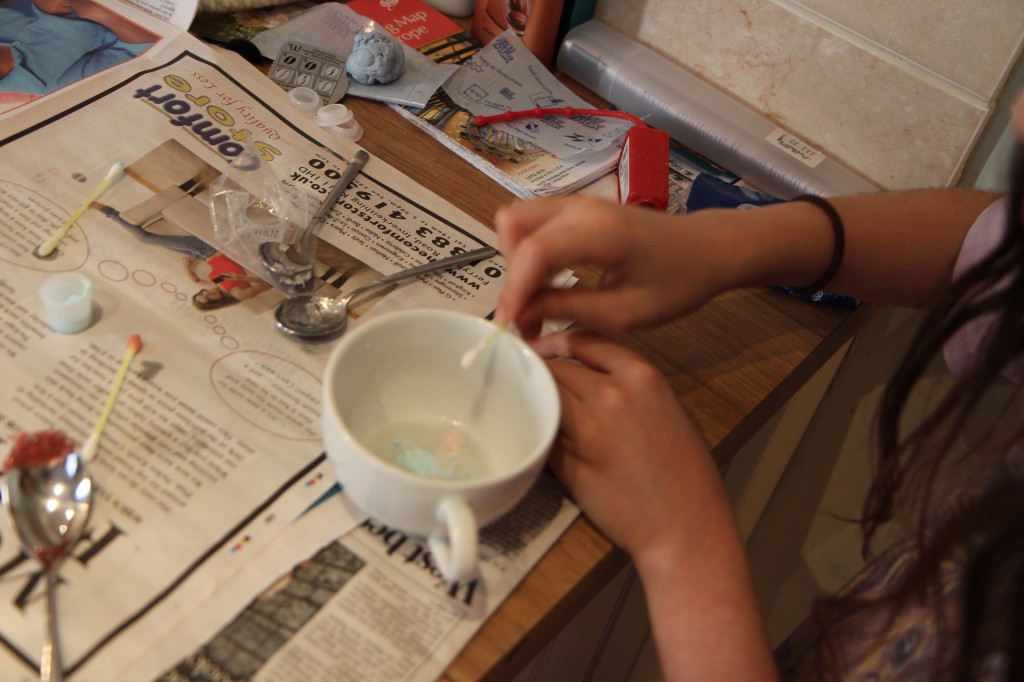 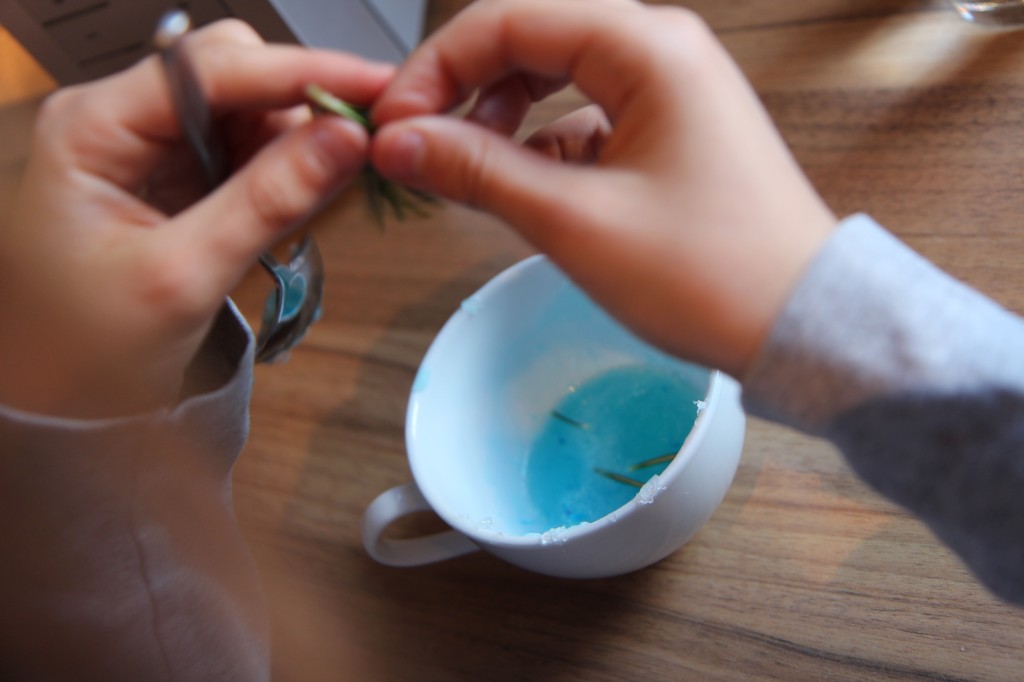 [sometimes you need basil in your soap]

Lisa and the girls use the local bus on an expedition to reach a better grocery store and find themselves among the school class in their uniforms. 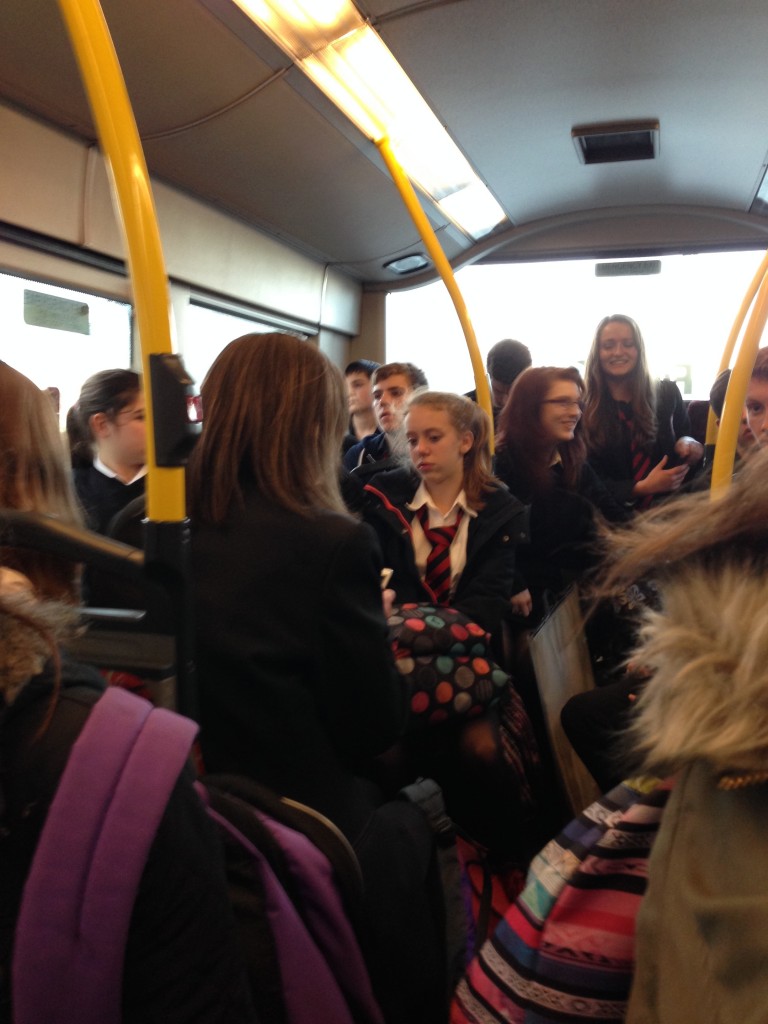 Across the street from our place, sits a great clothing store—Great Escape Surf, Skate and Snowboard.  Wandering in, we meet Gordon, a tallish, lean surfer with the speech mannerisms and easy smile to match.  His smile and gift of gab draw you in and he is genuinely friendly.  He shows us a picture of his young son in the surf.  I thought I was back on the West Coast.  After a while a tallish, lean greyhound wanders out from the back to examine the American shoppers.  The dog’s name is Florida Blue, a known baguette thief, and Gordon tells us ‘Blue’ will scoot down the street and snack at the pet store down the street till the owner calls Gordon and tells him how much he already owes him for the doggie buffet! 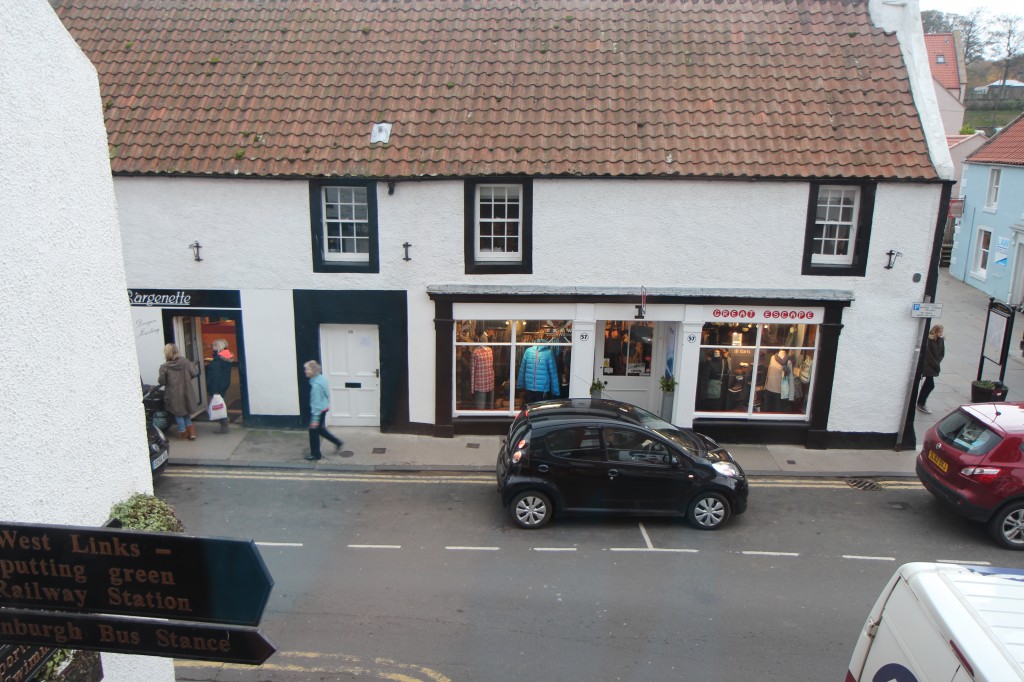 Blue is a retired racing greyhound and Gordon got him as a rescue dog.  The race dog owners of these dogs shock them to train them to leap out of the starting shack for races and mistreat them in other ways.  When the dogs age out of their prime they are unceremoniously killed.  Shelters rescue these dogs and get them out to families.  Blue is lazy as all get out and doesn’t want much in the way of walks.  When Gordon got him, Blue only knew how to run fast and turn left.  One day, Gordon watched him chasing another dog on the beach as the ex-racer struggled to figure out a right turn.

Gordon describes that the guy he adopted Blue from as the “classic Scottish geezer” and threw in a stronger Scottish accent to make the point.  Wonderful to hear a Scotsman preforming the Scottish accent of the Highlanders.  Here in North Berwick, they don’t generally roll their rrrrrr’s nearly as much as we’d expected, but it’s all goodness.  They use the word “wee” quite liberally and we love it.  He also demo’d an Irish accent in the course of the conversation.

Now, this classic Scottish geezer required a check to be written to cover the overhead and medical costs when people picked up a dog.  The shelter owner asked for a number with a couple zeroes behind it to be on the check and proof that the dog would have a decent backyard to frolic in.  Then the shelter owner told him how another greyhound had been adopted by a lady who’d come in to his place.  He’d asked her for the same things and she’d provided a picture of a backyard complete with a high security fence and what looked like a security guard.  The shelter owner told her, the high wall seemed like a bit much.  Then, she produced a check with a few more zeroes than he’d been anticipating.  When he started at the sight, she asked if it wasn’t enough!  Really, he’d just been shocked.  Then, he began to realize she was that “lady who writes those Harry Potter books”.  So, somewhere out there J.K. Rowling must also have a beautiful greyhound.

Gordon had a couple of men come in the store a year ago and they recognized the ex-racer.  They were racetrack bettors and had won thousands on Blue in his prime.  They told Gordon how much a champion Blue had been and Gordon was even able to find a few YouTube videos of him.  I went back to get a shot of them but missed them.  We could look in the store from our place and see if his Apple laptop was there or not so we could jump over and say hello.

Gordon needs to be named one of the Ambassadors for North Berwick.  Welcoming and willing to chat with the travelers, we were so glad to be across the street from him.  And, of course, a bag from his store found its way into our traveling circus.

Another day, we are out on the beach and Christine comes running out to say hello.  She’s the wife of Stewart from the ceilidh and had been so kind to us that night.  She had seen us out the cafe window while having tea with a friend and ran out to say hello. 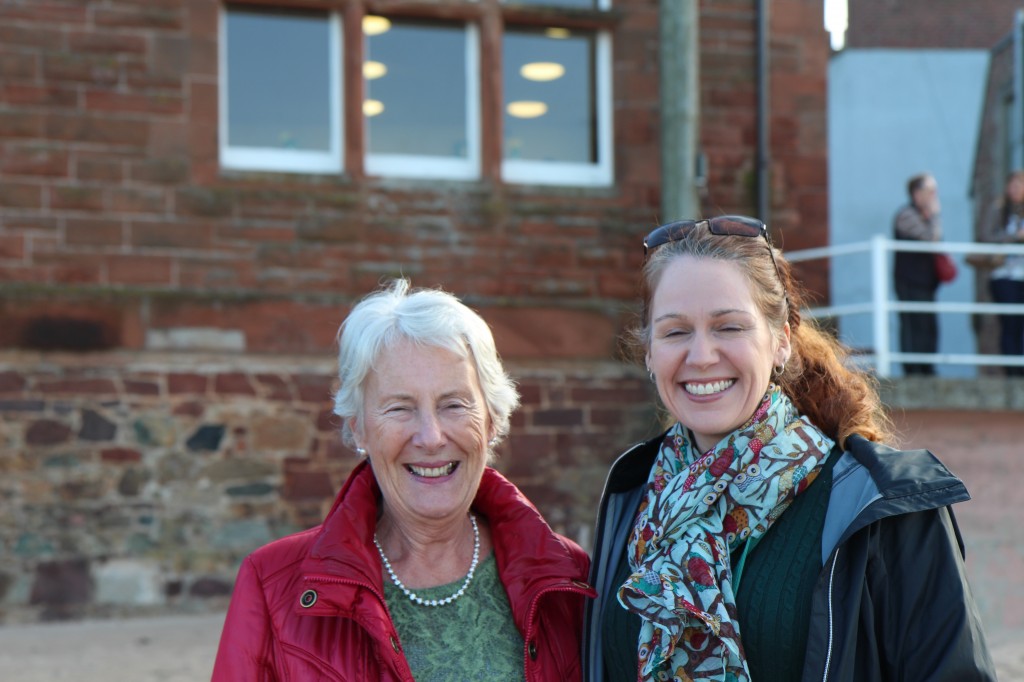 Such a wonderful, gracious lady.

We start to read Kidnapped each night by Robert Louis Stevenson.  We finished up Mr Pipes and loved to see Europe through the eyes of the characters.  The Scottish colloquialisms are starting to make more sense.

[The boys and I run to a bluff overlooking the beach and the town one evening.  Go Raider Nation–just win one!]

I am consistently amazed when I look back in our calendar and emails to see the faithfulness and grace of God.  We’ve been through a cancer diagnosis and the subsequent four chemo rounds, two stem cell transplants and a clinical trial achieving a complete remission.  Then a medical board for the Air Force that recommended a temporary retirement.  And what on earth truly is a temporary retirement?

We prayed about what we should fight for with that strange decision.  Then we received a permanent retirement after asking for it.  Next, after waiting for months for both I received on the same day notification of my promotion to the next rank and my retirement approval.

We’ve been blessed by ‘angels’ of friends with loaning us a car for 90 days, and free lodging for our clan for about six weeks via great friends and new friends that we housesat for.  The kids are seeing so much and learning—we are all learning so much.  God is so good.  When I look back at that calendar and see some of the decisions we were making in a short time—military retirement or not, moving or put everything into storage, travel or not, saying goodbye to friends, looking for a new career right now or focusing on this trip—I am astounded at how we’ve been carried through it all.  And when I look at the words we’ve written, especially when I was still in the hospital, I am touched and inspired.  It is strange the power of the written word.  I hope I can live my life with the boldness and hope and in an awareness of the limits of time that I feel now and was immersed in then.

Leave a Reply to Will Cancel reply