I probably don’t need to tell you that travel is not all rainbows and Lipizzaner ponies. :0). Not knowing the language and customs can sometimes cause problems.  And, since we are visiting numerous locations, they are not as thoroughly researched by us as we would like.

You might recall that we began our trip by showing up exhausted in small town Bavaria after all the stores were closed.  Eating the leftover Doritos and Oreos from our flight lunches was fun before tumbling into bed.  But the next morning, when we woke up late and jet lagged just after the bakery closed, we knew we would be eating on Plan B.  Enjoyably we survived on gelato and Octoberfest until the stores opened Monday.  However, I didn’t want to repeat that food strategy.  So, as we left Bavaria for Vienna, I shopped in advance for our Saturday night arrival and Sunday food needs.

That worked OK as long as the kids and I were happy with grocery bags underfoot and Brent didn’t mind the bags packed to the ceiling for the five hour drive that turned into a ten hour drive in the rain and traffic.  The next week when we left for Budapest we thought we would try a third strategy:  stop on the outskirts of town and only pack the car with groceries for the last thirty minutes of the drive.  (&arrive earlier!). Strategy C seemed like a winner with its great prices, big parking lot, more relaxed suburban folk, & only thirty minutes with a super loaded car until we arrived at the Budapest apartment only to find that there was no oven and we had bought frozen pizza for dinner and frozen breaded meat surprise for Luke’s birthday dinner the next day.  :-). 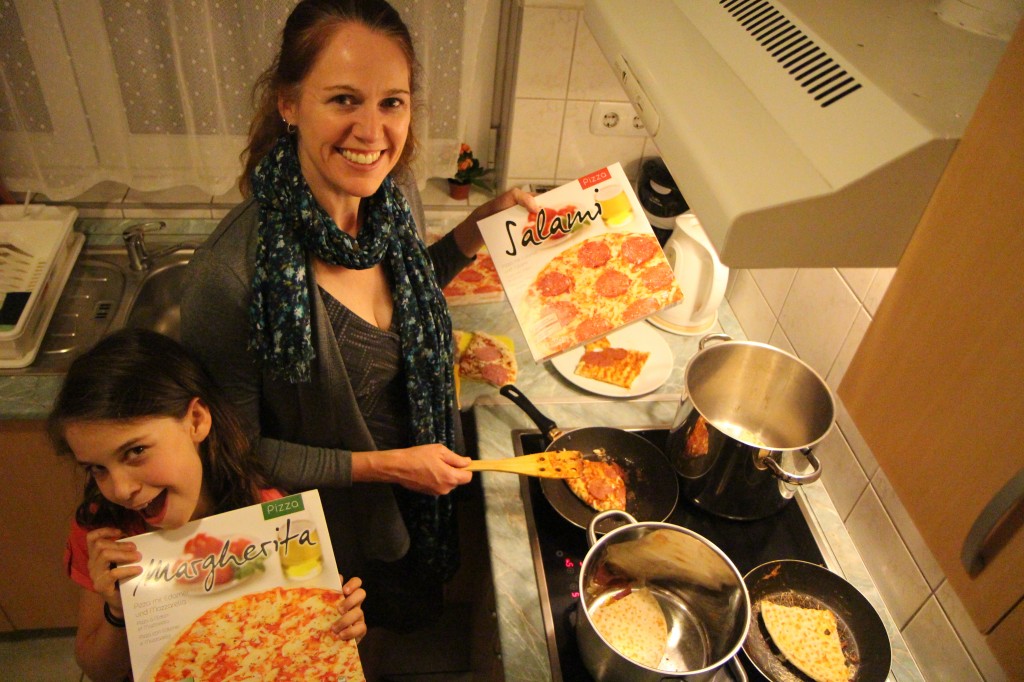 I hope you are laughing because cooking frozen pizza for six on a stove top is pretty funny.

The frozen meat surprise turned out to be Wiener schnitzel not fish sticks. We rarely know exactly what we are buying.  Was that tuna fish or cat food or both?  If that is really coffee milk, why is there a nursing bear on the label?  Was the baby formula section near the coffee? 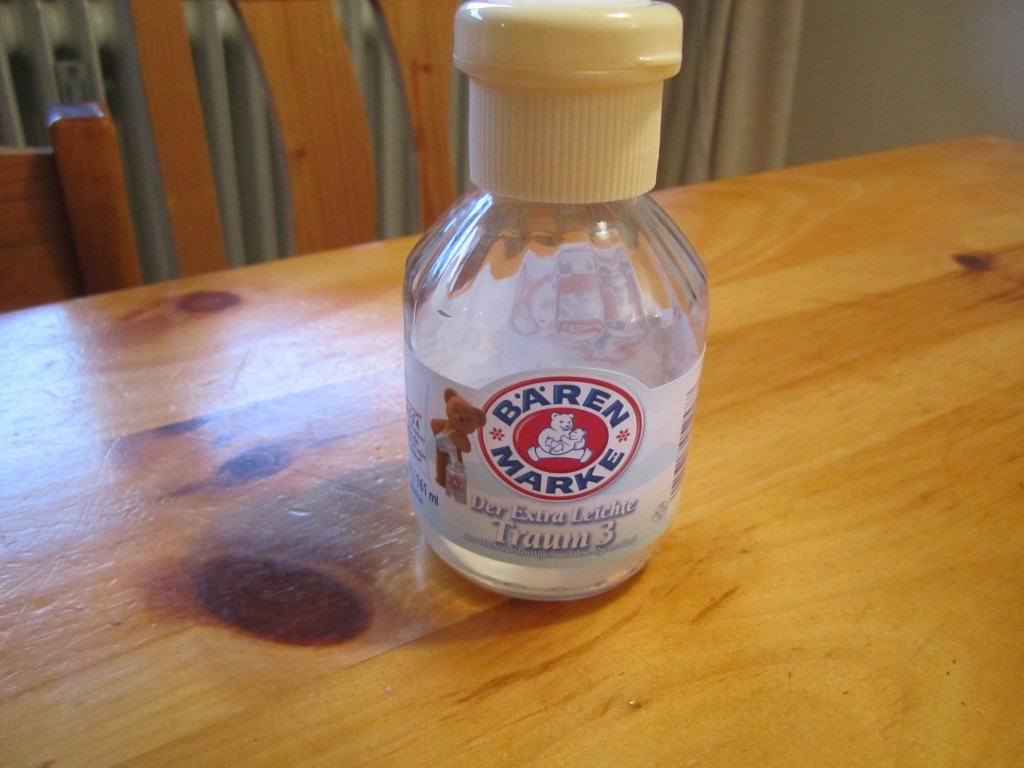 Oh! I guess this will macaroni and mozzarella cheese.  Stringy goodness.  Did we buy a train ticket or a bus ticket?  Is that a road or a hiking trail? …. Oops a hiking trail. REVERSE!  (Thank you for back up cameras!)  Who said Brent’s military vehicular talent was going to waste?  “What does that sign with all the exclamation marks say?”  Two hours later into our hike … Ooooohhhhh!  The red signs are for advanced hikes!  Oops again.  I guess those exclamation marks meant this trail was for “advanced” hikers.  We don’t have a picture of the memorial to the fallen hiker as we needed two hands for holding onto the cable we were using to climb.

Some things, however, have been uber predictable.  The proliferation of Bath and Body Works in the States means that your scent of hand soap is always changing from Vanilla Bean, to Wild Basil, to Lavender Fields, to Pumpkin Spice.  Not so here.  Watch out Moses, this is the true land of Milk and Honey.  From our apartment, to the grocery store WC, to the toilette at the mountain lodge at the top of that 2 1/2 hour hike, in Salzburg, Garmische, and all the way to Vienna, the soap of choice is unanimously Milk and
Honey.  Seriously, every single place.  Only in Budapest did we finally get Aloe Vera. 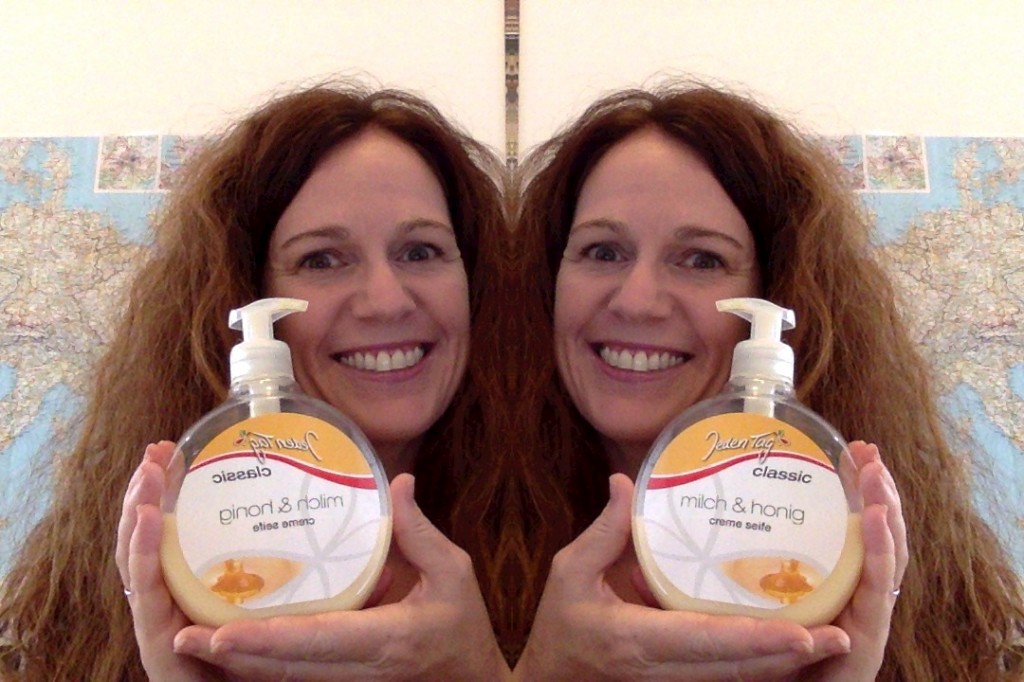 If that sounds like a lot of bathrooms to you, it is. I usually shower in the morning.  One night in Vienna I awoke overly alert and panicked about how many public bathrooms I’d been in that day.  I had to shower before going back to sleep. I still think that was smart. 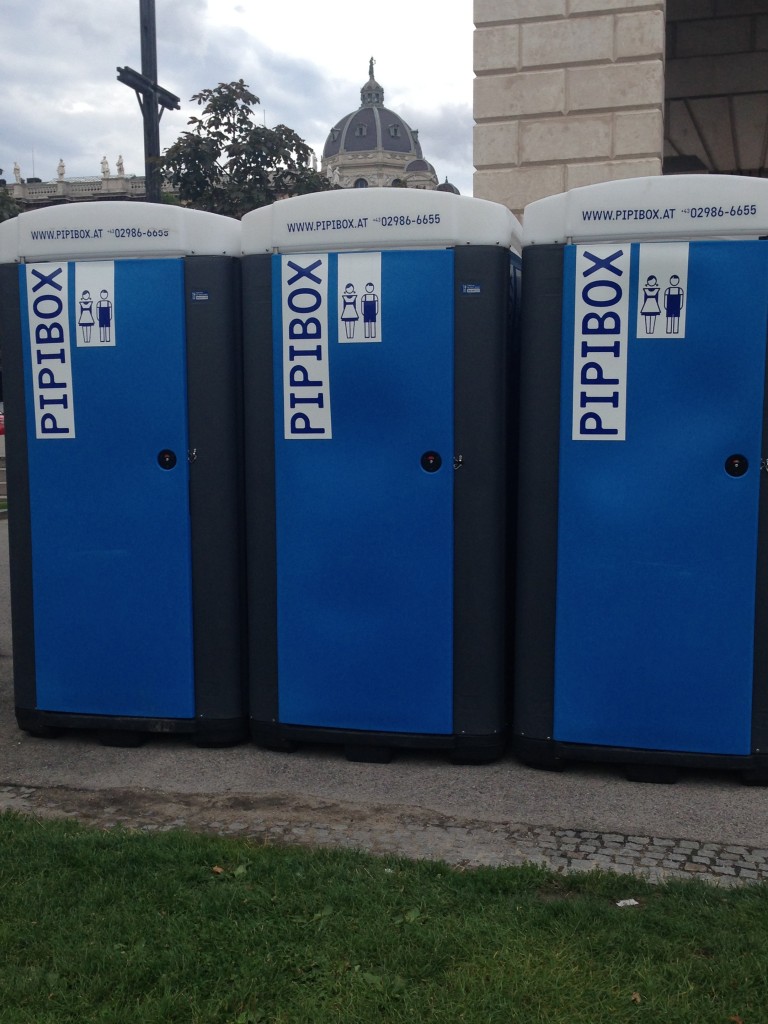 We also have had our share of city activity.  You see, we are on a budget, so we aren’t making the typical splurges you might expect during travel.  No sleepy tourist zone hotels for us.  I was pleased that a Slovak family of five was checking into the same Budapest apartment building as us (They couldn’t speak Hungarian either).   After a couple of days in Vienna, we learned our neighborhood was the place to go for marijuana. We heard a sound during the night that was probably a car backfire, but startling nonetheless.  From our window here in District VII of Budapest we’ve seen and heard a loud protest.  Moms, I promise our neighborhoods are “safe”.  But, they are in the city.   And, as much as we try, we JUST DON’T BLEND IN.  Even if a would-be thief didn’t notice the largest family in Europe as they entered the subway station, he or she would soon hear the nearly perfect English of one of our children, “Dad!  Look!  The train’s almost here!” or “Mom, Mom, Mom, which is your favorite Marvel Comic character?”  Or, “Dad, what powers would you have if …”  Or, they might notice the wrestling.  The girls are usually pretty quiet.  They don’t often make odd exclamations, but the boys.  The boys wrestle lovingly with each other from the time they wake up until the time they go to bed especially when we walk down the street.

I think in an effort to blend in, to compensate for the size of our family and our English ways, Brent will be buying a pair of yellow floral capris.  What do you guys think?  It’s the least he could do, really.

One last thing: romance.  Walking along the Danube at night with your husband while looking at the lit up bridge is romantic.  Walking along the Danube at night with your husband and four kids, calculating the swift current of the river and the distance of the fall to the river and the OH my GOODNESS how would they ever get out of the river and would they be run over by one of the speeding river boats before the boat could see the flailing swimming kid and are those waves too high for the boats to see them anyway while watching your kids wrestle and jump and walk two feet from the edge of the drop off to the Danube at night when surrounded by imaginary bad guys (and you don’t blend in) is not romantic.
I suppose worry is NEVER romantic.  In fact, this morning I remember 1 John 4:18,

“There is no fear in love, but perfect love casts out fear.”

My love is not perfect, not even close.  This year may bring extra occasions for all of us to practice casting out fear.  Practice is good, it makes you stronger.  Practice makes even your muscles remember what to do.

May I, may we, practice not letting what might happen detract from the magic of what is happening.  May I, may we, always remember that we can run to the One who is Perfect Love – no matter what.  We have nothing to fear.