We will miss Jolana & Jan but it is on to the next part of our adventure.  We do the familiar bag  loading calculus, let the kids get their nests built and settle in a for a journey back west.  We’ll practice our German via the coffee break German podcasts.  It feels good to be headed back to a language we’ve practiced a tiny bit.  Czech has been interesting, Polish a challenge and Hungarian is nothing like the language of its bordering countries.  Of course, that doesn’t really matter to us because we don’t know those bordering Slav languages anyway!

Every time I load up we clean everything out of the car again.  The cupholders and under the seats are treasure troves of legos, plastic animals and remnants of snacks that we keep trying not to eat in the car.  I bet that all sounds a bit familiar.

The drive will take all day so we plan a stop about halfway at a small, walled town—Rothenburg ob der Tauber.  The name means something like “red fortress on the Tauber river”.  It will be about 3.5 hours there and another 3.5 after. 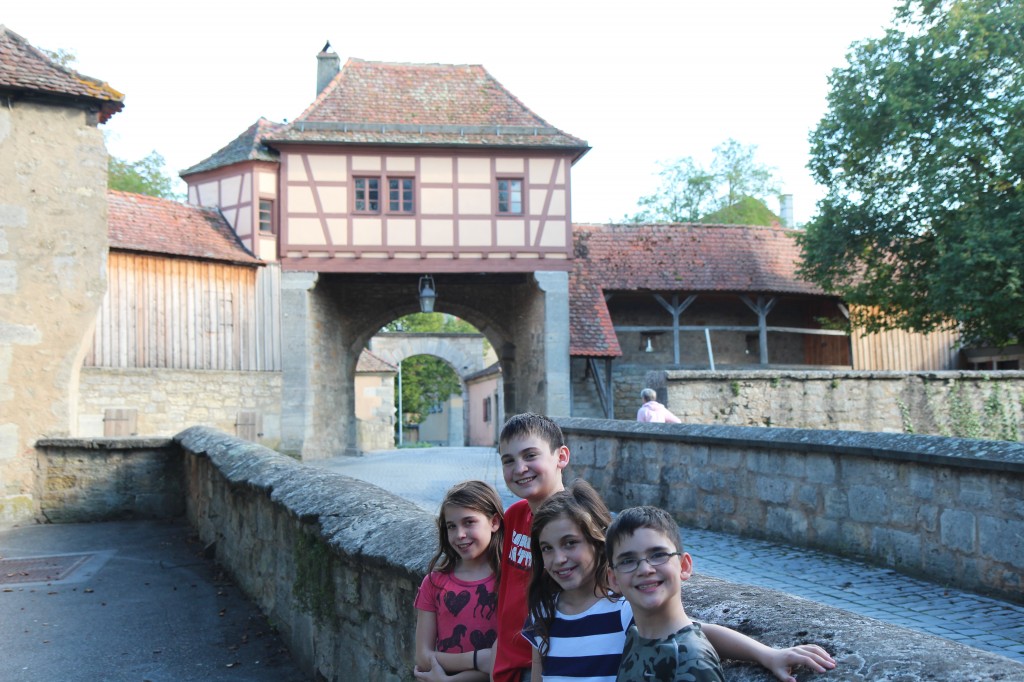 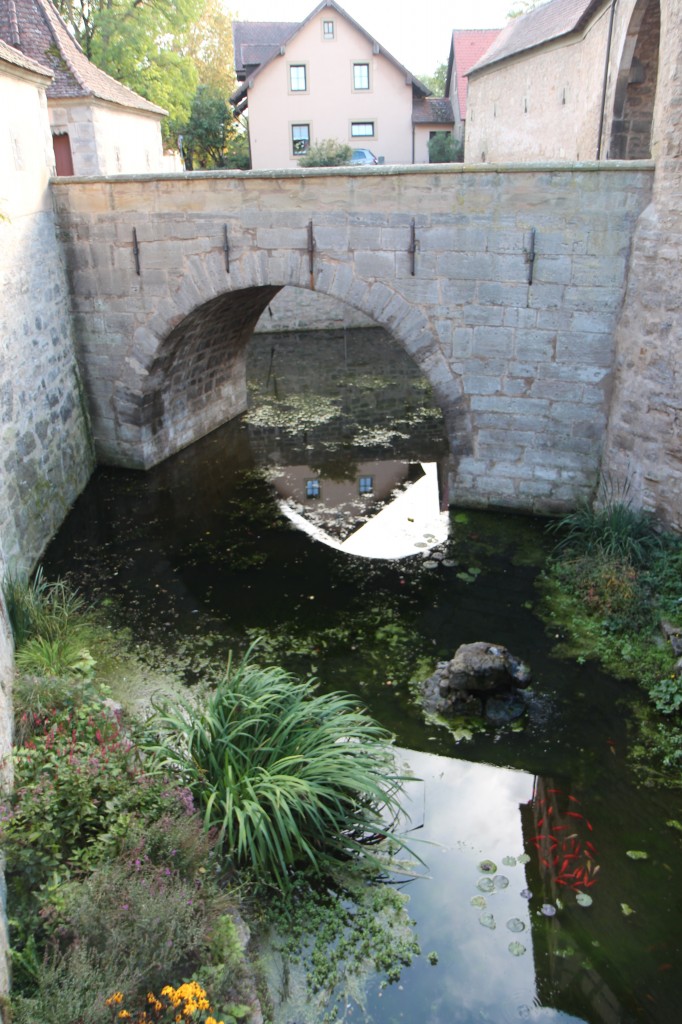 Through these travels, we are consistently reminded of the pervasive power of stories to capture the imagination.  A few places we’ve visited are known because stories were told about them through the ages.  People are encouraged to visit Auschwitz and places like it so that the story of what happened there will live on.  Stories and myths are celebrated and passed along to satiate an appetite that must be hard-wired into us.  Of course, Jesus taught so many of his principles in parables.  Many of the buildings, churches and museum relics we’ve seen have certain elements that attract attention because of the story that’s involved.  For instance, we all know of Loch Ness and we all know why it is the most famous loch in Scotland.  Over 600 lochs reside in Scotland but I wonder how many others we could name.  The ancient sword in Vienna’s museum has more value because it may be associated with Charlemagne.  That same museum boasted a unicorn horn (read “narwhal’s tusk”).

For the same reason, wherever we go, people explain what part of their village or their special interest is in a movie or a book.  Our own guidebooks expose us to the fame of many of a place.   The Harry Potter books and films are a link for our kids to many different places.

As I check a few Rothenburg facts online to explain what it was like there, I stumble across—sure enough—the town was used in a “Harry Potter Deathly Hallows” film and was the fairytale village seen in the movie “Chitty Chitty Bang Bang”.  The brief Harry Potter scene of Gellert stealing the wand of Gregorovitch takes place in Rothenburg ob der Tauber.

We spy a plaque at an ice cream place bearing a Rick Steves endorsement on our way into the town square.  He possesses a rare ability to communicate the nuances of traveling tips and specifically encapsulates European history into bitesize chunks for an American audience.  We frequently find his guidebooks in our hands and see them in others at many sights.  His success has even changed the experience of certain, smaller sites somewhat akin to a huge mutual fund finding it difficult to invest in a small company without changing the whole picture.  Another shop has his picture displayed on the door showing he’s been in the store. 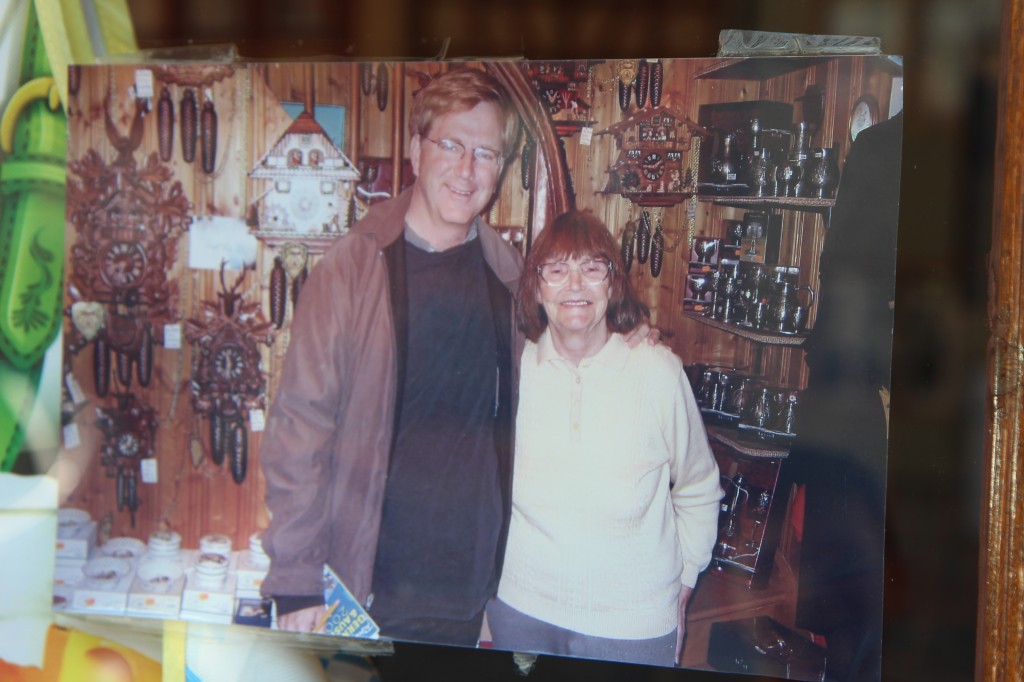 Rothenburg ob der Tauber is a top German tourist board site, an UNESCO world heritage site and also a stop on the Romantic Road, Germany’s north-south scenic route in the southern part of the country. Promotion-minded tour agencies devised the 350-kilometer stretch in the 1950s.  Brown signs bearing the “Romantische Straße” (often in Japanese too) mark sites such as Neuschwanstein, Wurzburg, Nördlingen and Rothenburg ob der Tauber.

The original Käthe Wohlfahrt Christmas store displays its festive wares right down the cobbled street from the Old Town square.  There are more ornaments than you can shake a stick at.  No pictures allowed in most of the store.   A ten foot tall wooden Christmas pyramid carousel spins with motor power rather than candles.  There’s a Christmas museum too with fully decorated Christmas trees.  With the kids trying not to combust from all the Christmas energy in the place you keep looking over your shoulder worried that some hidden Elf security force isn’t about to storm out and stop everyone from touching the nutcrackers. 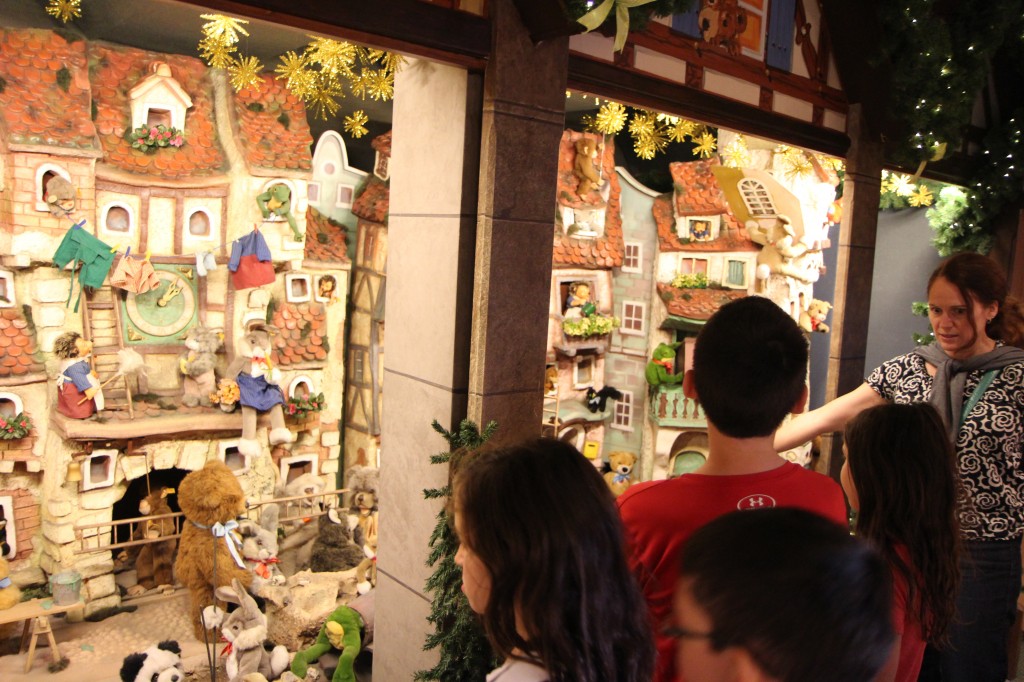 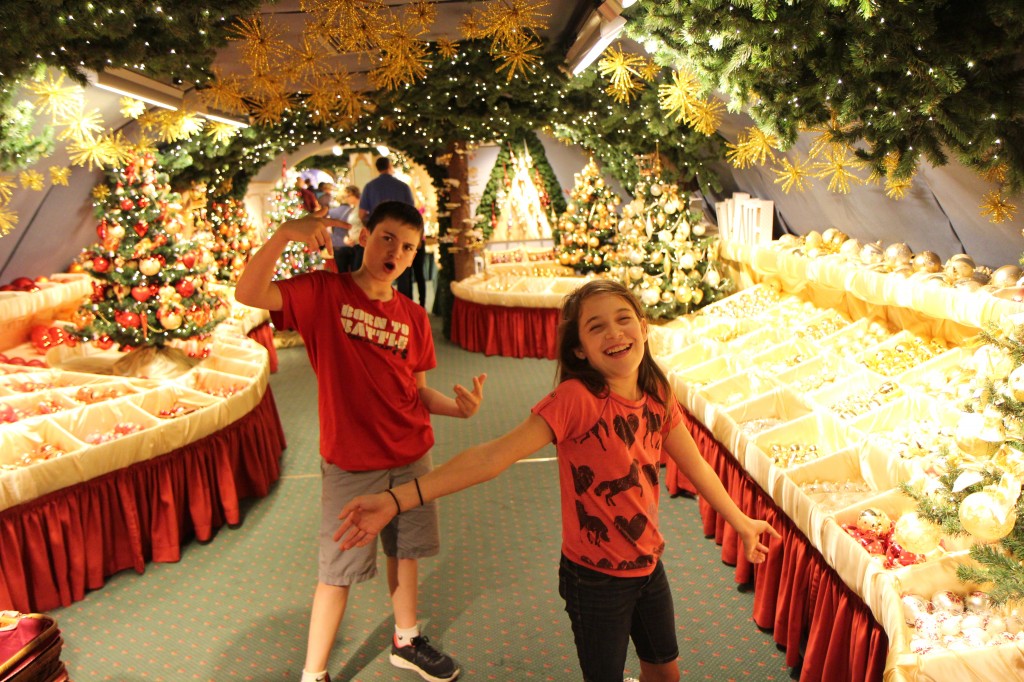 The Marktplatz—Market square—clock puts on an hourly show much like Prague’s Astronomical clock.  But this one is far simpler—two windows open revealing two men drinking from tankards. They both drink till one falls over—the loser. 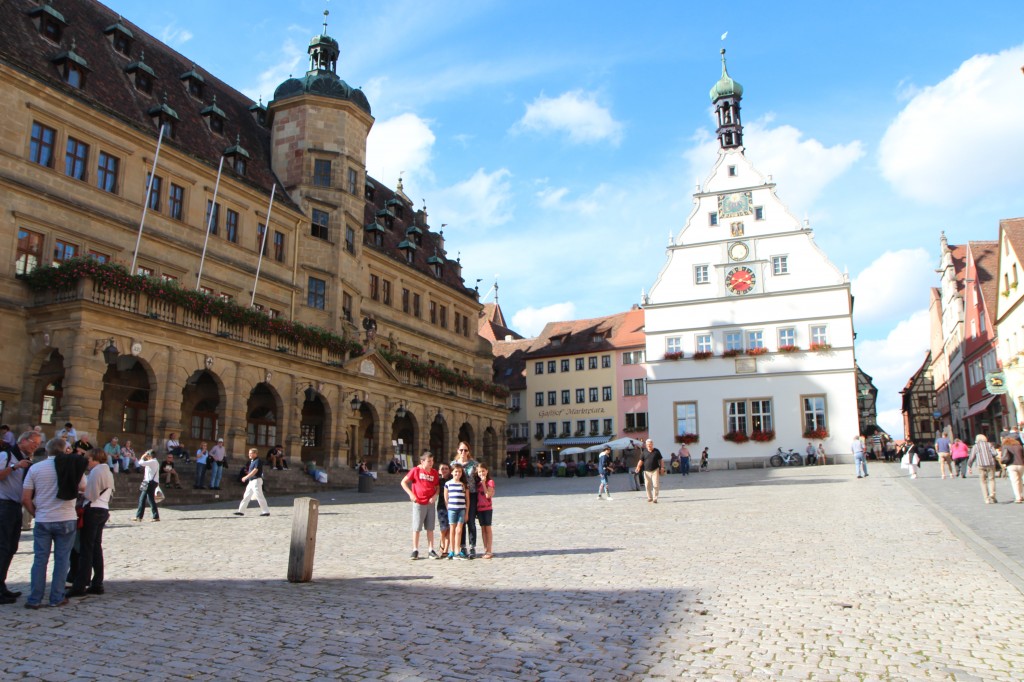 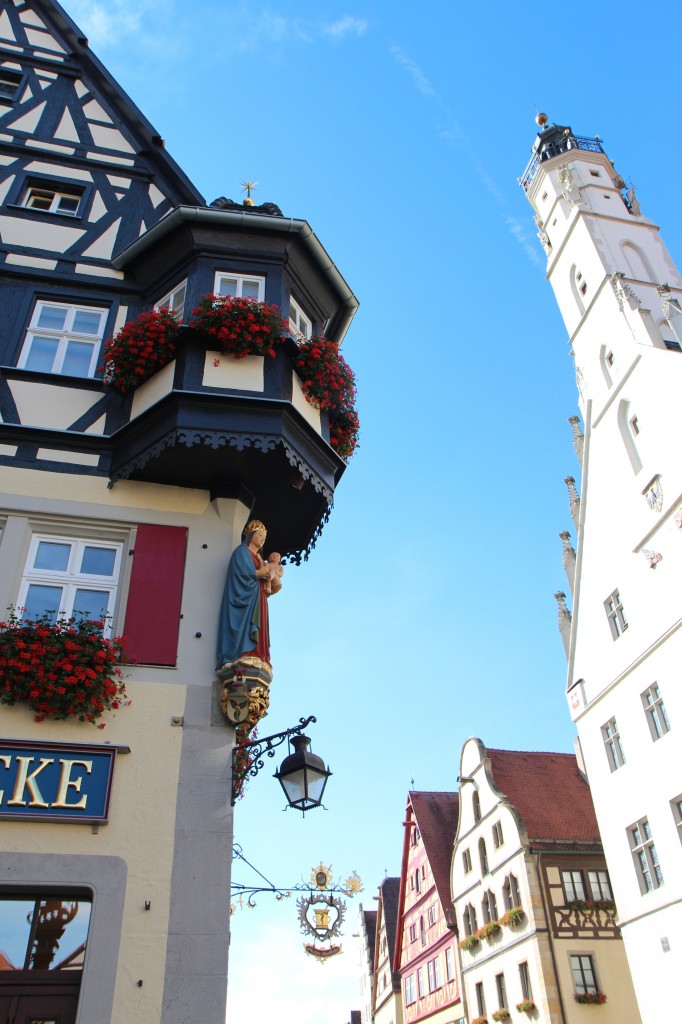 From the town’s tourism website, “Every hour on the hour between 10 a.m. and 10 p.m. the clockwork figures on the clock above the Ratstrinkstube entertain the public with the key scene from the legend of the Master Draught.  According to the story, former Mayor Nusch saved the town from destruction at the hands of the troops of Imperial General Tilly by winning a wager by drinking 3 1/4 liters of Franconian wine in October 1631. What is known for certain is that the women of Rothenburg and their children assembled in the Market Square to beg Tilly to spare the town.”

This threatened destruction of the town took place during the Thirty Years’ War as the villagers stayed the hand of the Catholic Tilly from burning the village.  To commemorate the event, people flock to the annual Meistertrunk festival.

Another great Rothenburg story is that the Americans bombed it in WWII but senior leadership advised army commanders on the ground not to use artillery against this culturally important city if at all possible.  A contingent of US troops marched in under the white flag to present terms to the Germans for their surrender.  The Americans announced that if they did not return to their lines in three hours that US artillery would begin to demolish the city.  The Germans deliberated and surrendered despite Hitler’s orders that no unit should surrender no matter what.

This is the place to see a wealth of buildings from the middle ages.  We can’t stay for the night watchman’s tour but wish we could.  We are traveling this much and still can’t see it all.  Better to pick and choose your focus, just like so much of life!

But we can do one of the things we do best—run all over the place and enjoy the atmosphere. 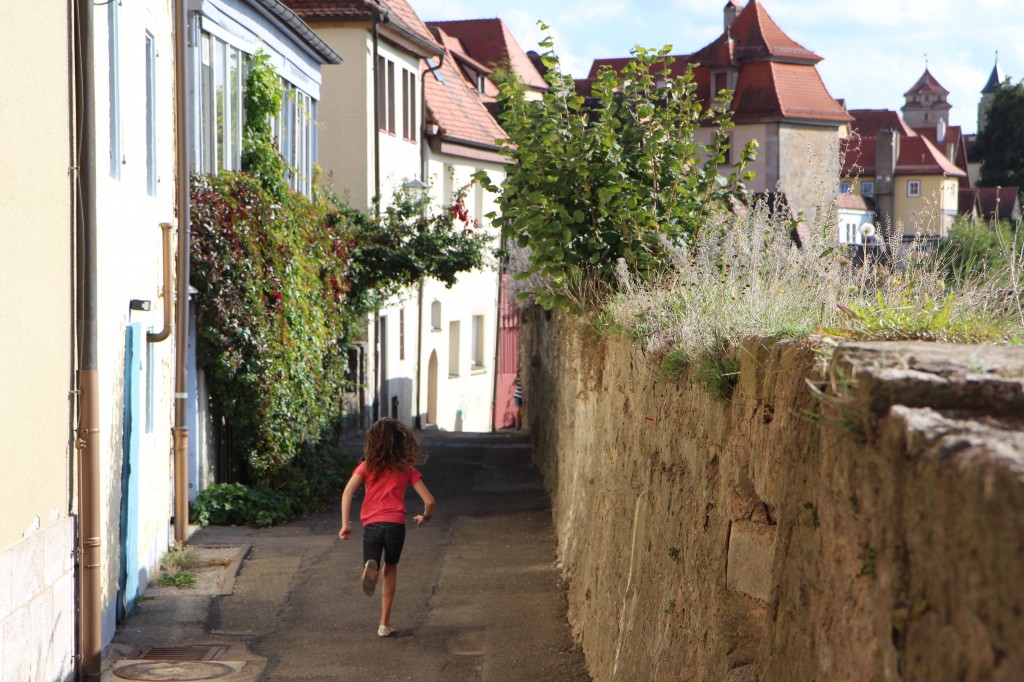 So we set out on exploring the wall that encircles the tiny town. 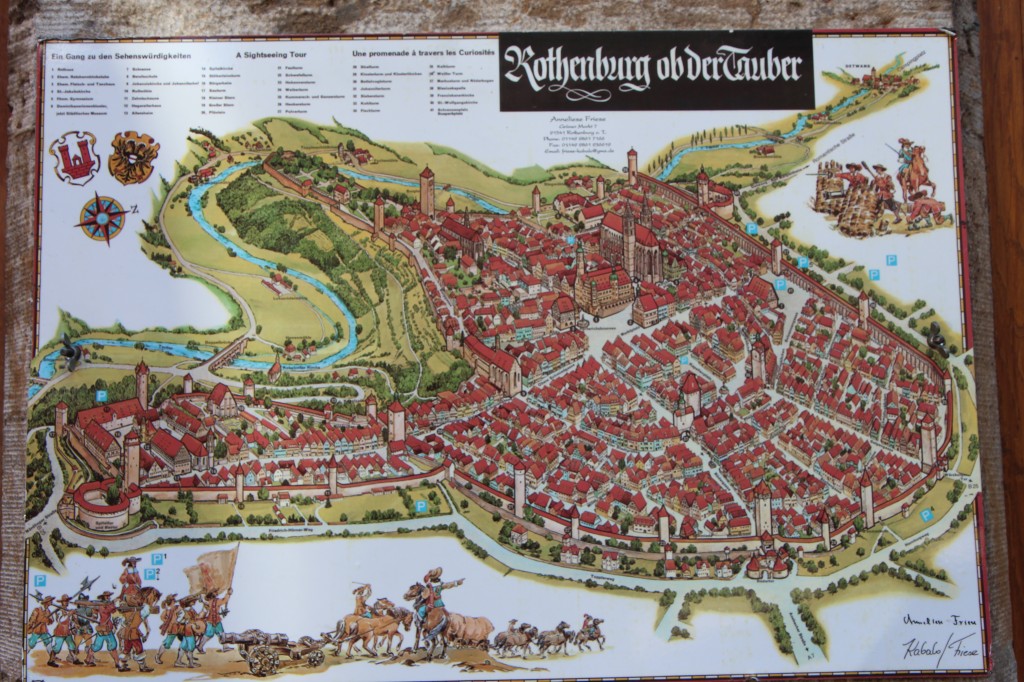 The kids run ahead, then run back to us to show us some tucked-away corner.  We run up and down stairs and into dead-ends on the wall and have to backtrack to find the part that continues on.  It is all just plain fun. 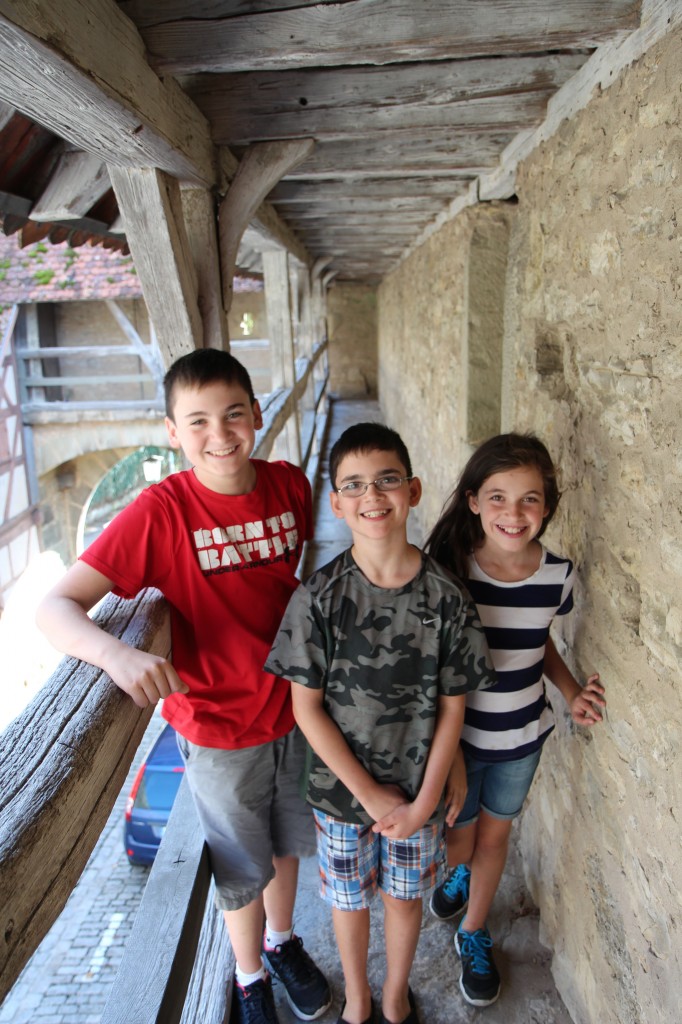 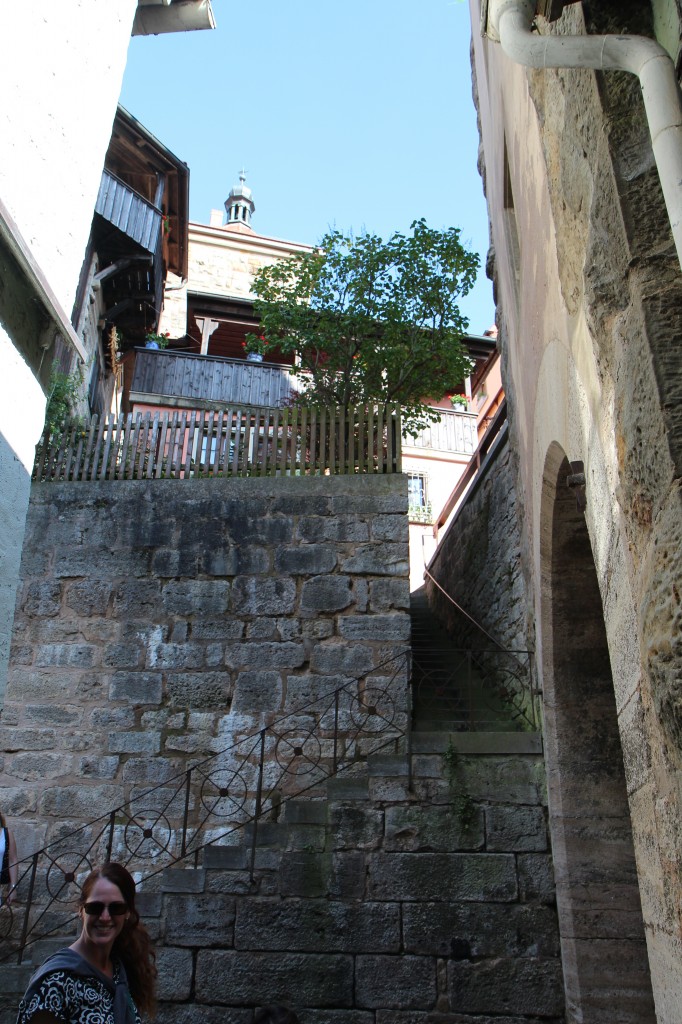 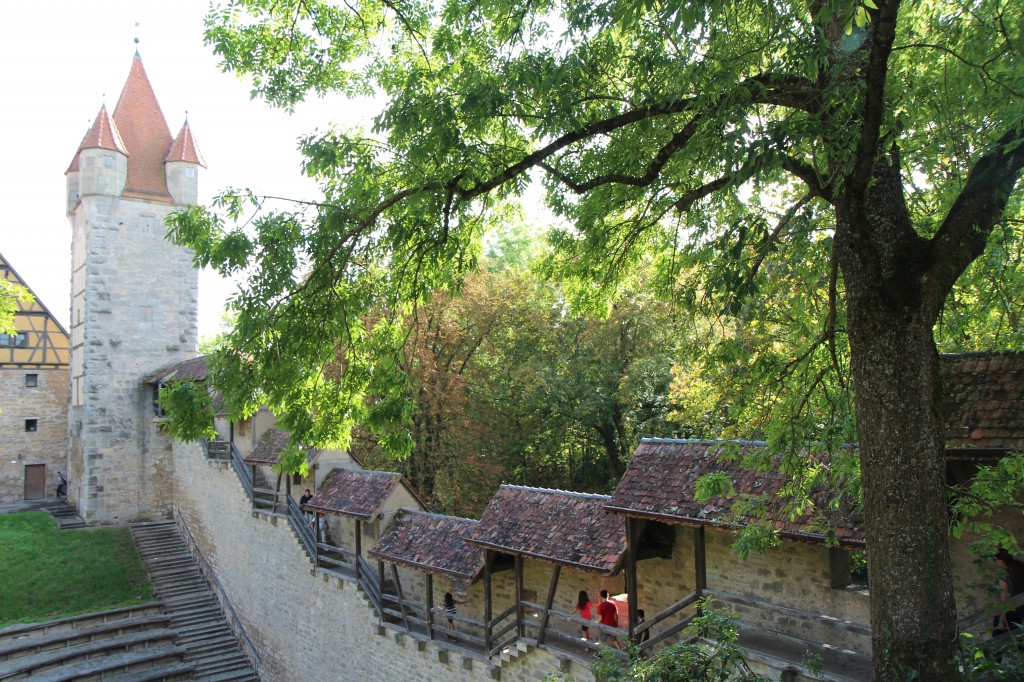 The kids, especially the boys, frequently have to pause to take some shots between turrets and arrow slits to defend the city. 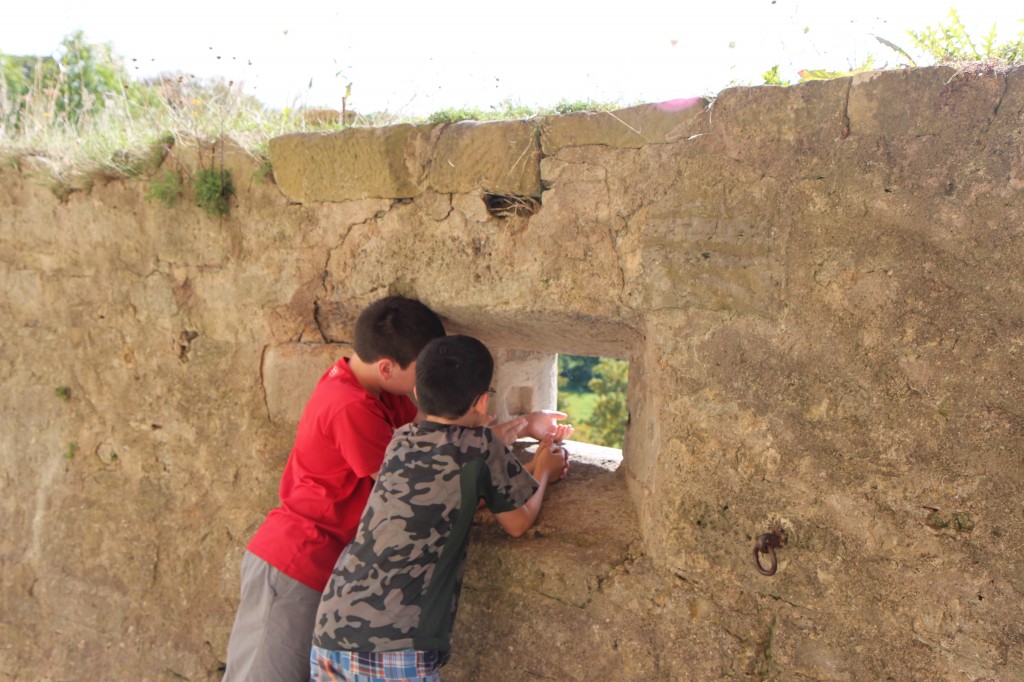 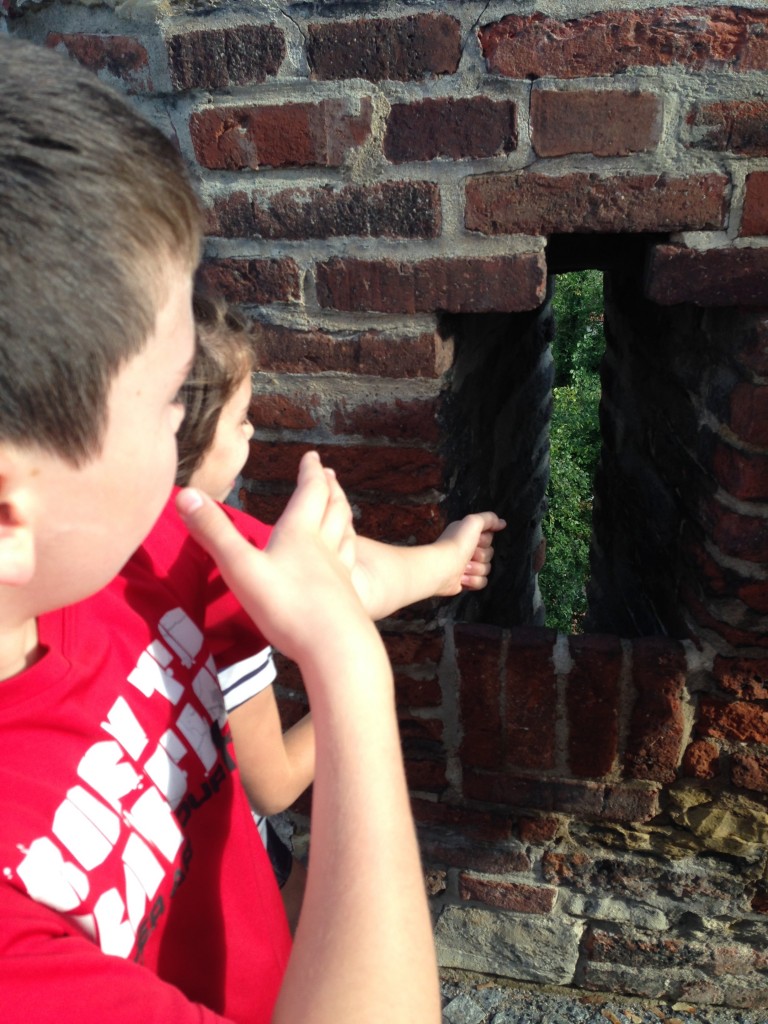 We climb medieval towers via sloping stairs and stoop beneath wooden beams to run along the walls. The boys are still discussing which of their sisters was hit by incoming artillery and why.  There are plaques everywhere celebrating the people and groups who donated to rebuild the walls (after WWII or just general repair).  The townsfolk are friendly and they know a thing or two about tourists. 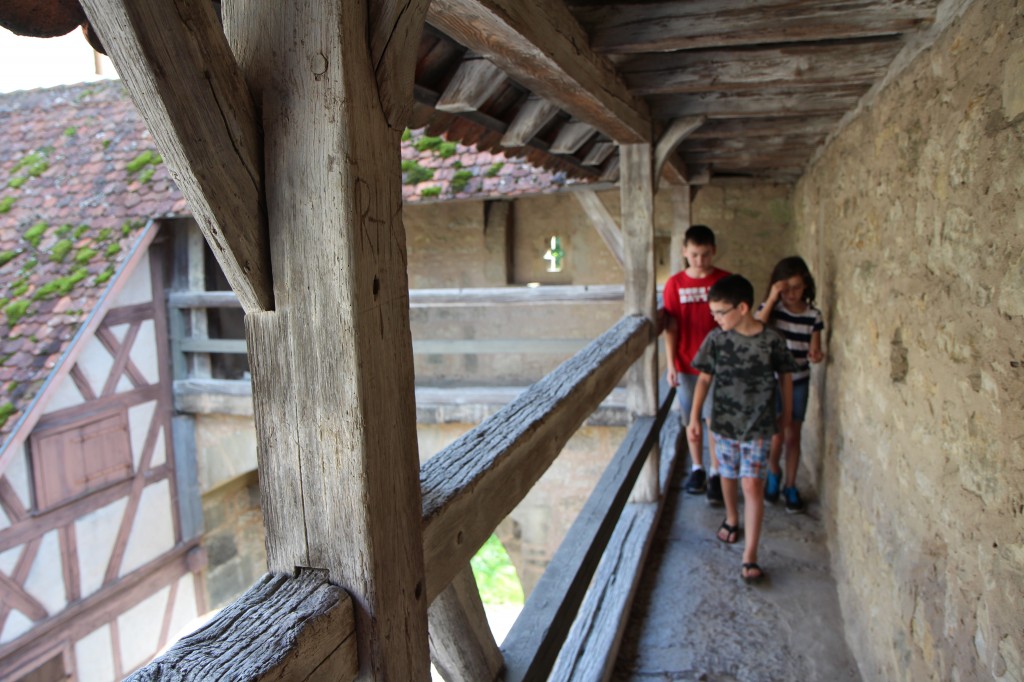 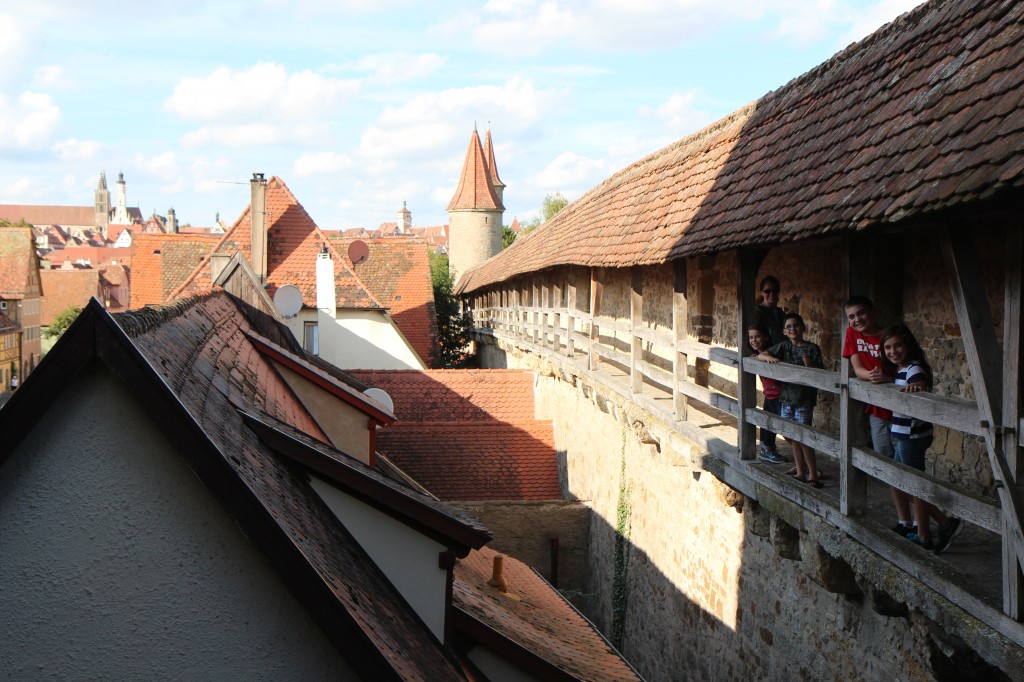 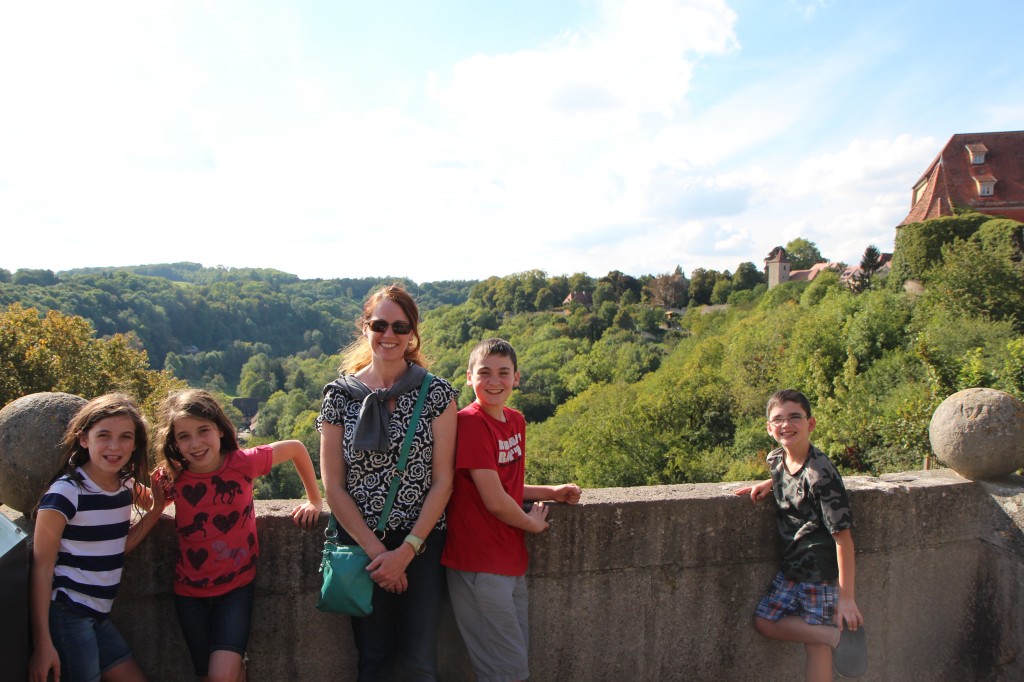 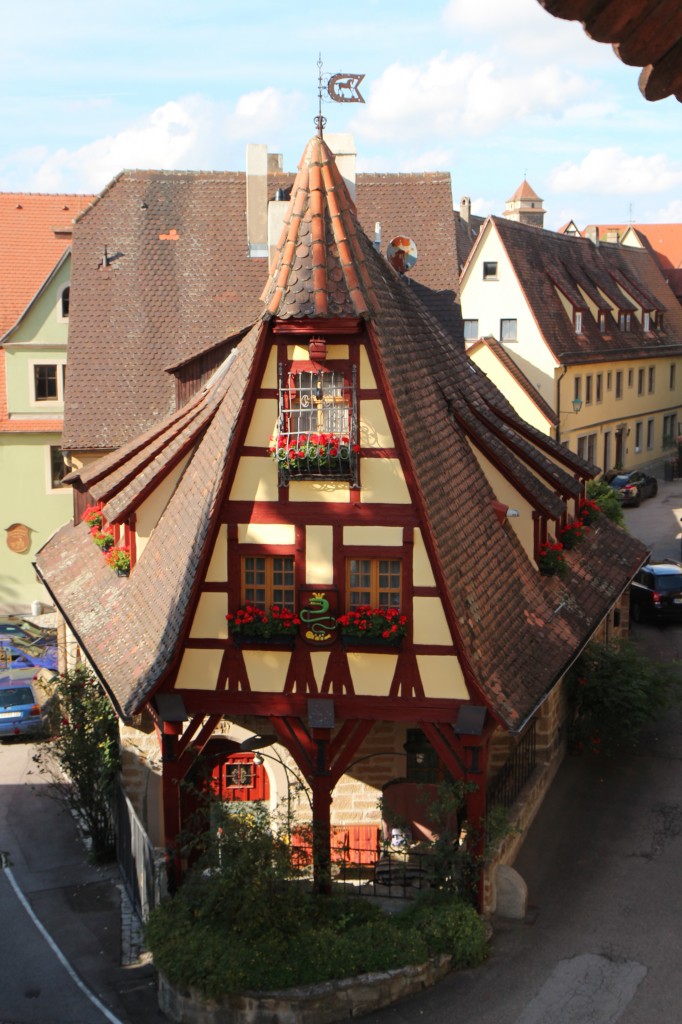 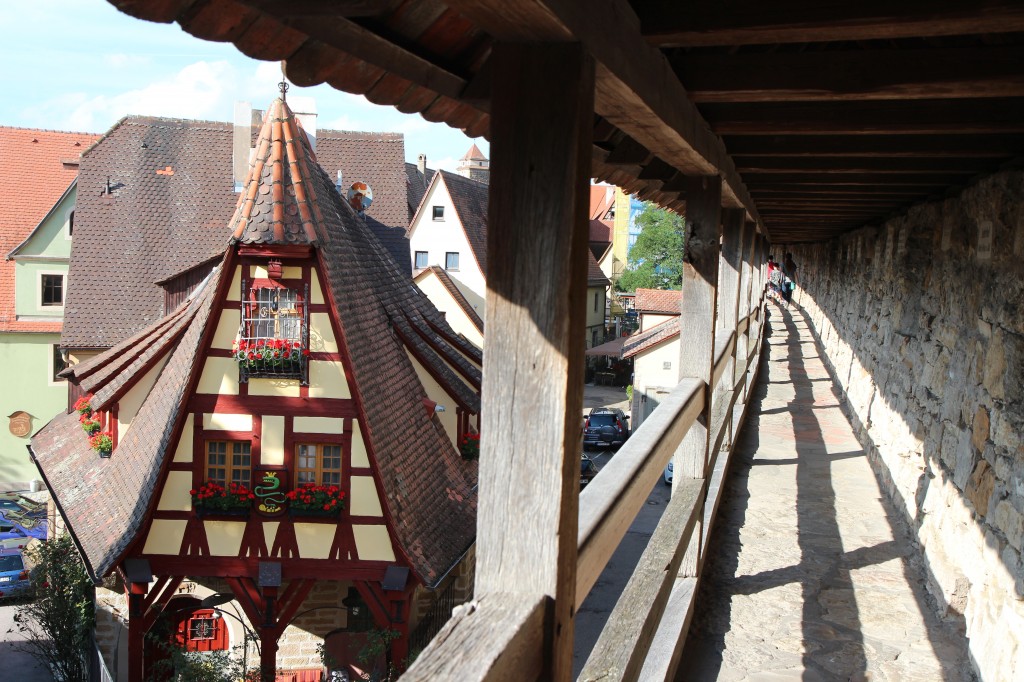 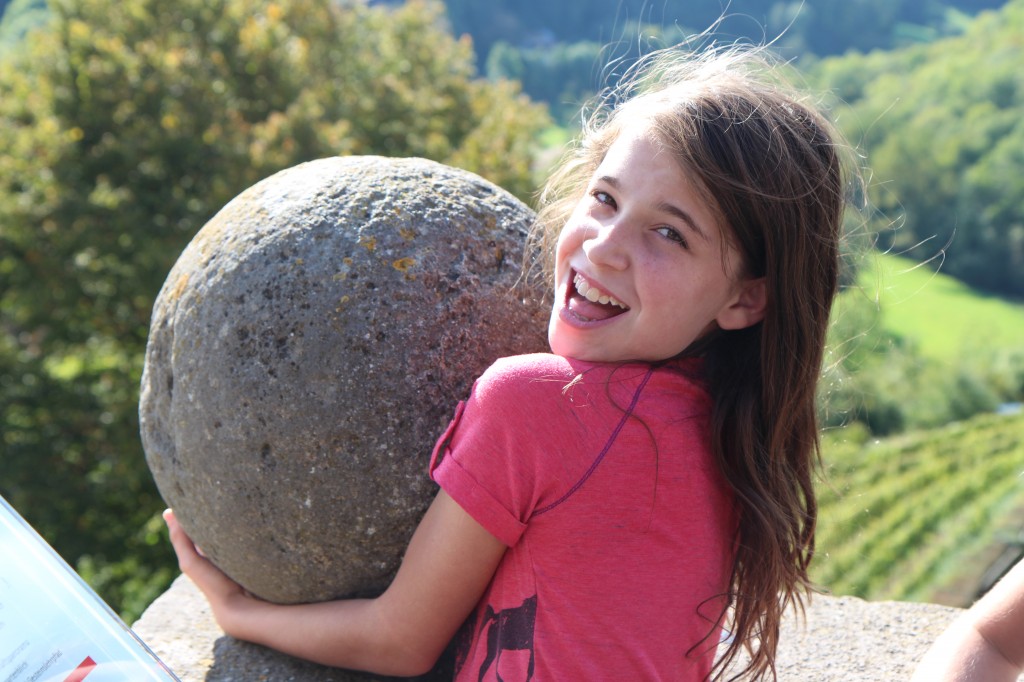 The on the road planning is nonstop, obviously, for next lodging places and attractions to see.  We’ve got a few days before we can check into the small town in the Moselle valley that we’ve found.   Nuremberg was primarily booked up but we were able to get a few days at the affordable base TLF at Spangdahlem.  “TLF” is a great military acronym for “temporary living facility.”

It’s a challenge to get a reservation at a base because the “standby” traveler is understandably not their priority.  They must keep rooms open and allow room for official business travelers and families moving in or out until relatively late in the game. We rightly get the leftover rooms, so you don’t know until just a few days prior.

We drive by signs for Kaiserslautern and its Ramstein Air Base where we started our European portion of the adventure about six weeks prior.  Finally arriving through the darkness after a hideous traffic jam, we drive up to a brightly lit gate bearing the name of Spangdahlem Air Base.  The American flag is prominently displayed here.  After our last three years living on base for the first time—at Joint Base McGuire-Dix-Lakehurst in New Jersey—it feels like driving up to your own neighborhood.  The American guard even speaks American!   And he gives clear directions to the lodging office on base.  Can’t hardly wait to go to the BX!

The room is great—strong wifi, two bathrooms, beds for everyone and English directions on the washing machine—and even cheap. 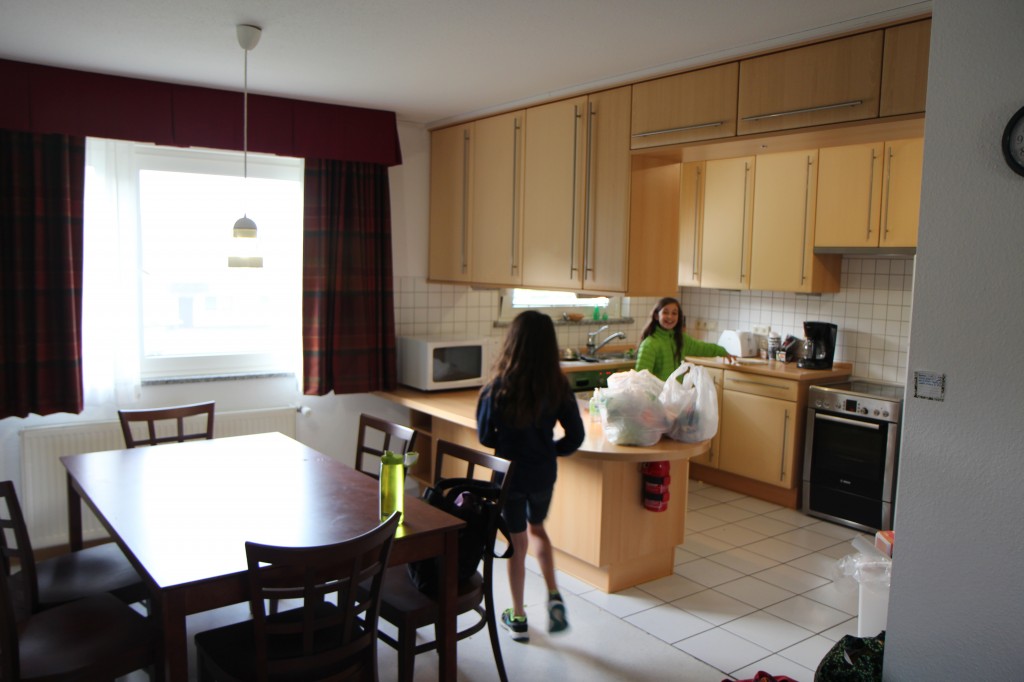 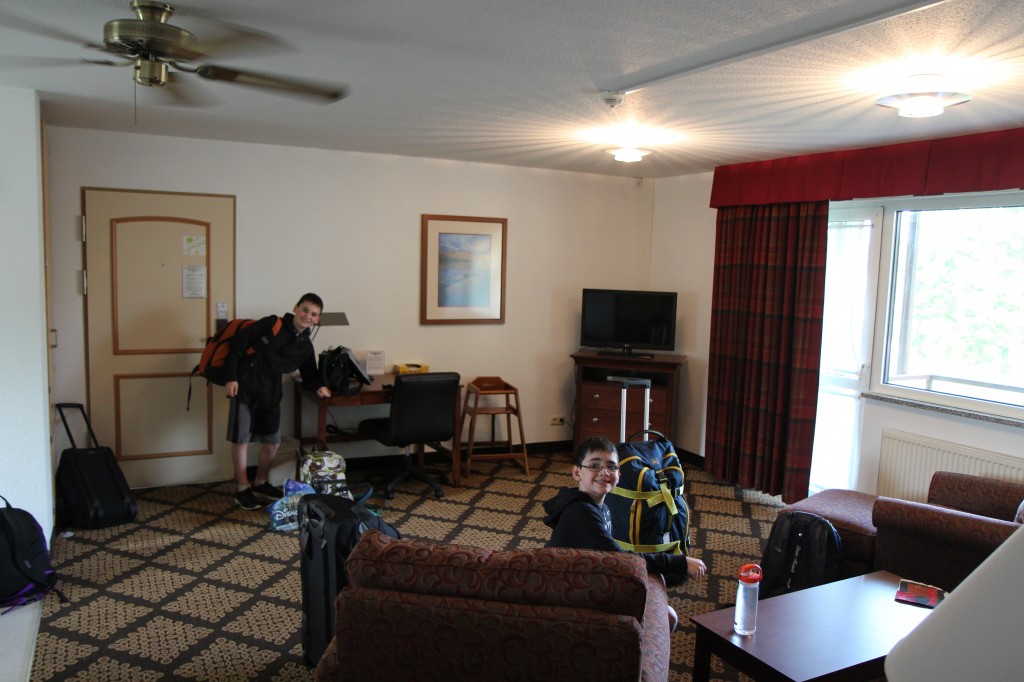 Thank you so much for your thoughts and prayers!  We received news that my lab results are all within the normal range.  It had been three months since my last check.  Thank you God!  We are so grateful.  Without realizing that it was really there, I’ll admit to feeling like a boulder has been lifted from my shoulders.  Thank you again for reading and joining us on this adventure.

11 thoughts on “A fairytale of a walled city”