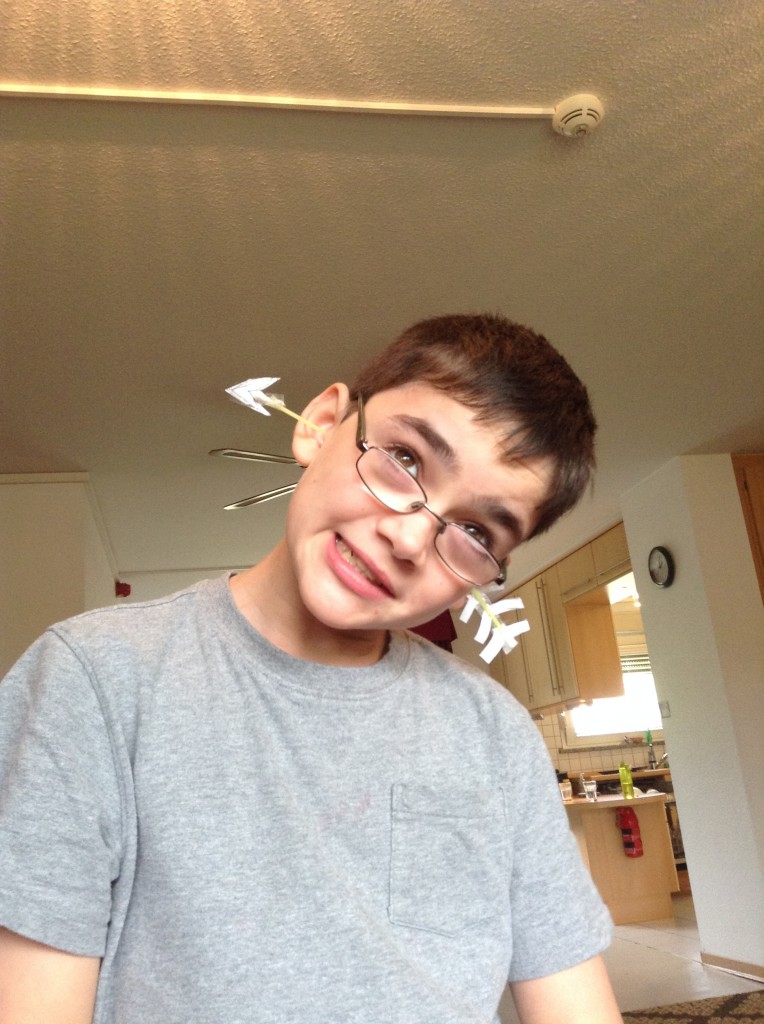 Spangdahlem Air Base has the typical, wonderful American air base facilities—a base exchange (mini-mall), huge gym, outdoor recreation for renting equipment, tennis courts, child development centers, neighborhoods, you name it. It’s a town in and of itself.  Of course, for the pilot, it’s all about the beautiful iron on the flight line and the 10,000 foot runway.

The morale and welfare folks have a family fitness challenge event underway and other people are all over the football field and soccer fields doing various athletic competitions.

The kids have been telling us, “You’ve got to see the Lego movie.”  One night, we find a place to rent the movie, and it’s the kids’ first movie in a while.  “Everything is awesome” rings through our apartment.

It’s also great to be able to spend our stowaway US dollars.  We end our search for tennis balls and pick up a few so we can play a little tennis on the base courts.

Our family gets the chance to attend the small base chapel on a Sunday morning with a handful of other families.  The pastor, Sean, is a real encouragement and describes his son who his now at West Point.  It turns out we have mutual friends.  Several of my friends have ben stationed here and we loved seeing where they lived, even though they had moved on.

Spangdahlem is a Cold War base built in the early 1950s.  The US military has closed most of its European bases and its more difficult than a few decades ago to get an overseas assignment.

It is still amazing to find this slice of Americana smack dab in southern Germany.  The opportunity to travel and even live overseas must be one of the unique advantages to military service. 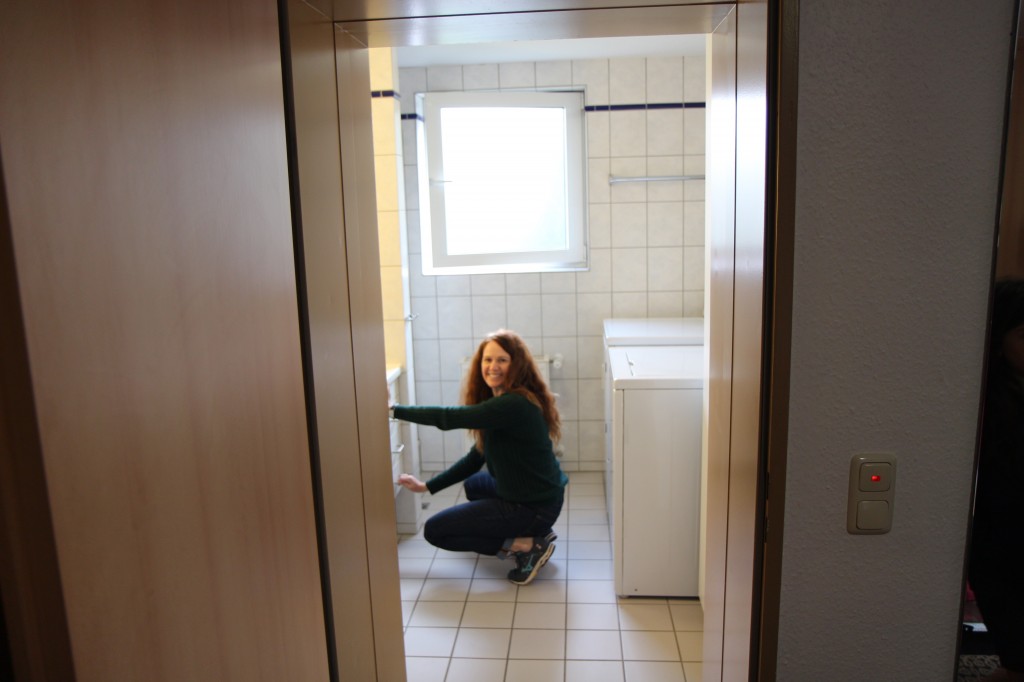 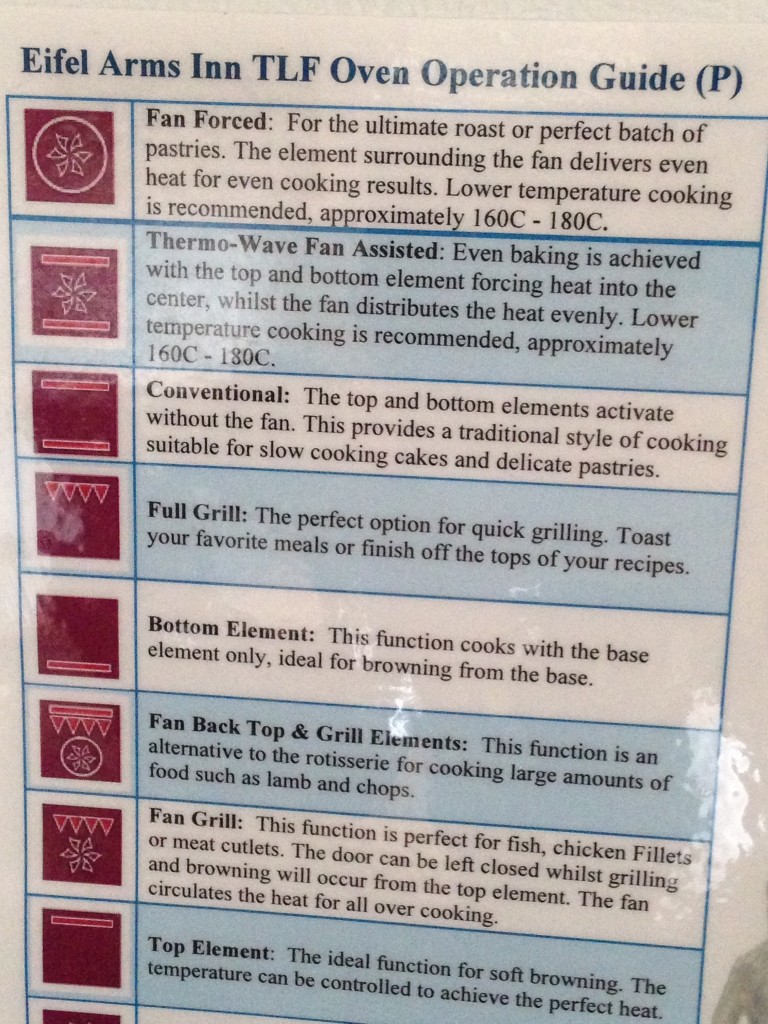 I can’t help but drive by the flight line.  No surprise, I find I miss the flying and the camaraderie of military life.  Twenty-one years somehow flew by!  Lisa tells me she misses the on-base neighborhood we enjoyed in New Jersey.  I know we will find a community soon to put roots down into and that thought brings us both joy.

We hardly leave the base at all.  It is comfortable here, but we remind ourselves we are not on this investment of family time for comfort.

I am glad we have not planned many days here on base!  Time to get back out to the adventure.

Trier is likely the oldest city in Germany and was founded in or before 16 BC.  But there is a plaque on one of the medieval buildings in the main square that pays homage to the founding myth of the city’s Assyrian birth.  In Latin, the message says, “Thirteen hundred years before Rome, Trier stood / may it stand on and enjoy eternal peace, amen.”  Not far from this plaque, is a market cross that has stood here for over a thousand years.

Trier was a residence of the Western Roman Emperor, after the Roman empire was “split” into two halves for administrative efficiency.  I write that like I know it, but I learned about such a split from Lisa and the kids as they did the history portion of their Classical Conversations curriculum last year!  In the 4th century AD, Trier was one of the five largest cities in the known world with a population of about 80,000.

The Porta Nigra gate is the best preserved Roman city gate north of the Alps. 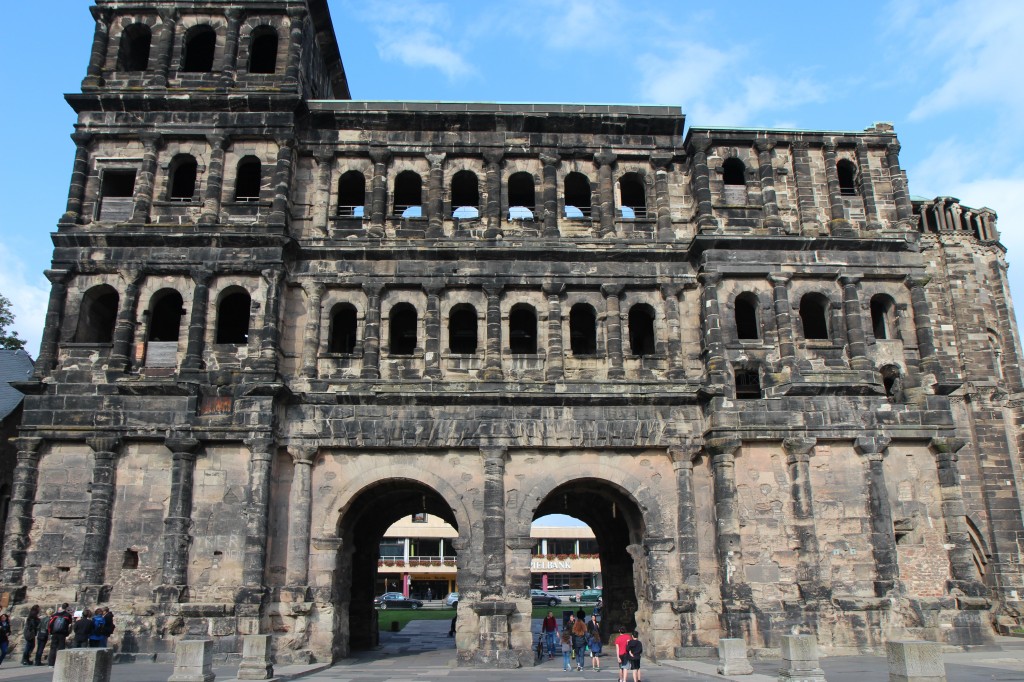 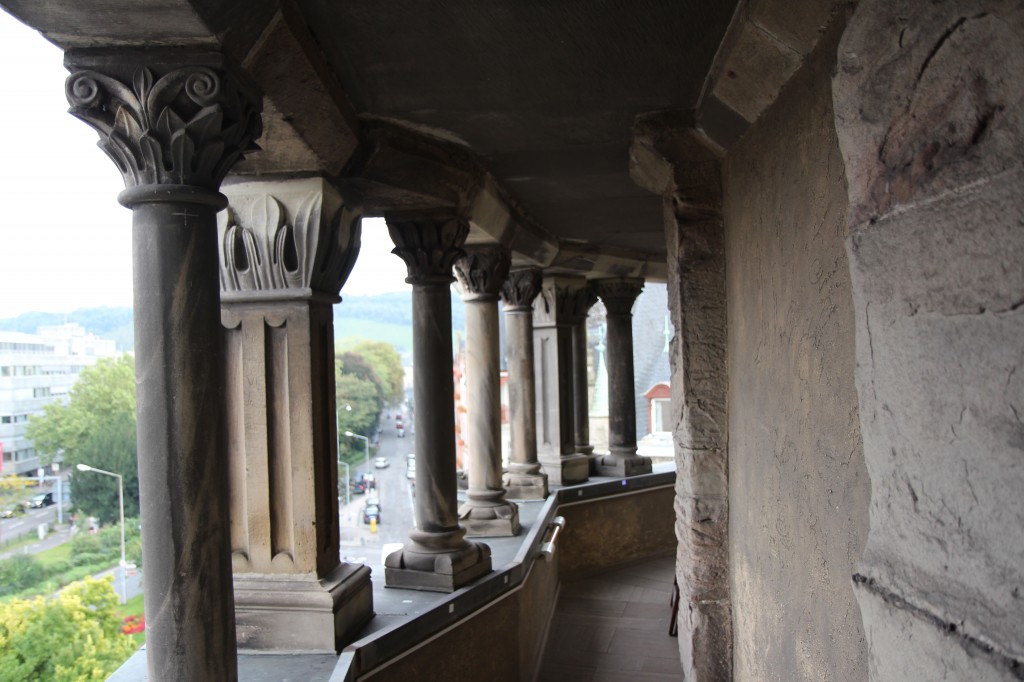 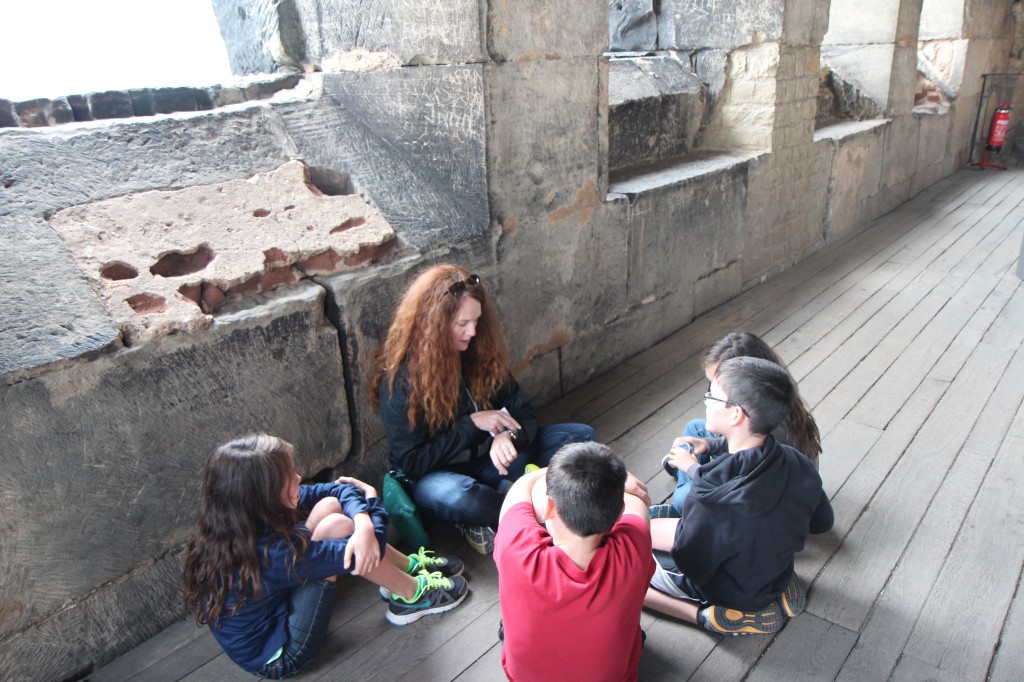 This city gate was built between 186 and 200 AD.  It was part of a system of four gates controlling commerce and providing security to the city.  On the city side of the gate, the remnants of Roman columns have been left.  This colonnade would have stretched about 100 meters and had a “crowning cornice and parapet” to cover this Roman street approaching the gate. You can even glimpse parts of the old Roman road to the next city climbing into the surrounding hillside. 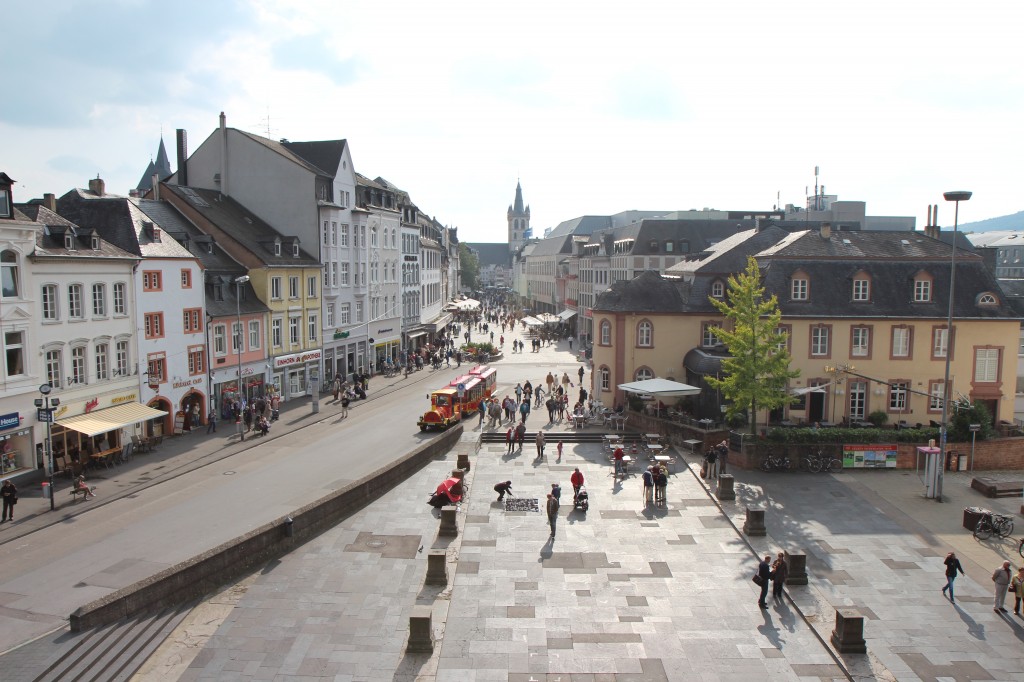 The gate is enormous and it’s not difficult to imagine the imposing impression this would have made on a visitor coming upon this vestige of Roman engineering and strength.  There was a gigantic iron portcullis that could be dropped as well as open archways to launch attacks from. 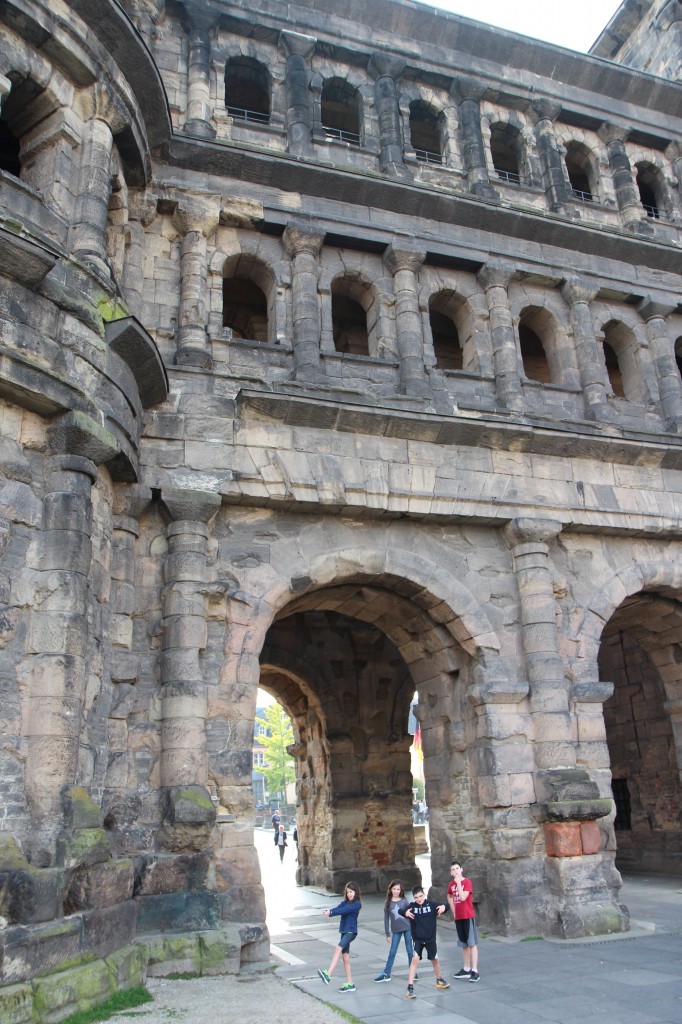 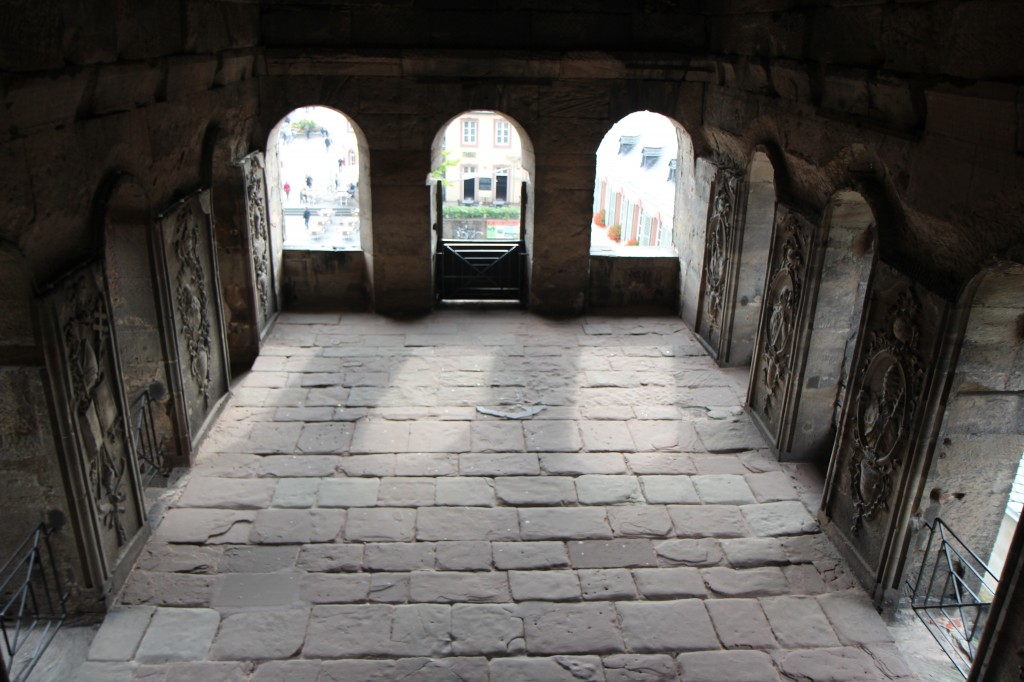 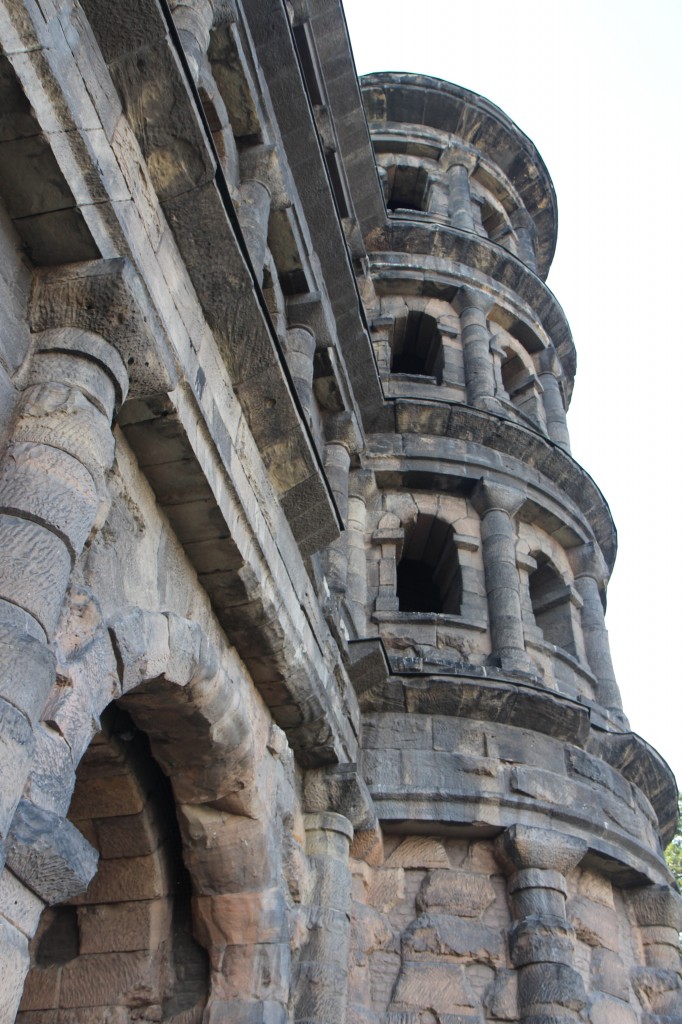 We’ve come across many Roman ruins that are torn apart by locals repurposing the building materials for other structures—like their own homes.  By the early Middle Ages (sometime around the 5th to 6th centuries) the gates were no longer in use for their designed purpose.  The Porta Nigra had some of its iron works removed and the damage is still visible.  The gate was built without mortar, utilizing iron spegs to keep the sandstone blocks together.  But the Porta Nigra likely survived because a Greek hermit chose one wing of the gate as his hermitage.  The monk’s name was Simeon and he took up residence in 1028.  He lived here for seven years before passing away and becoming beatified.  To honor him, a monastery was built right next to the Porta Nigra and the gate itself was converted into a church. 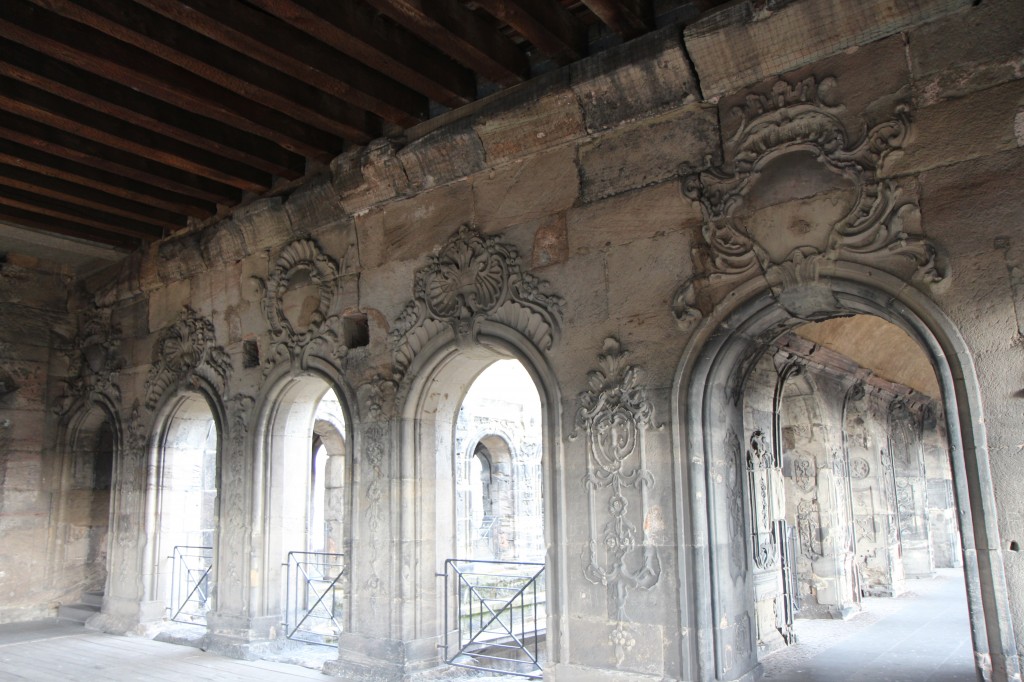 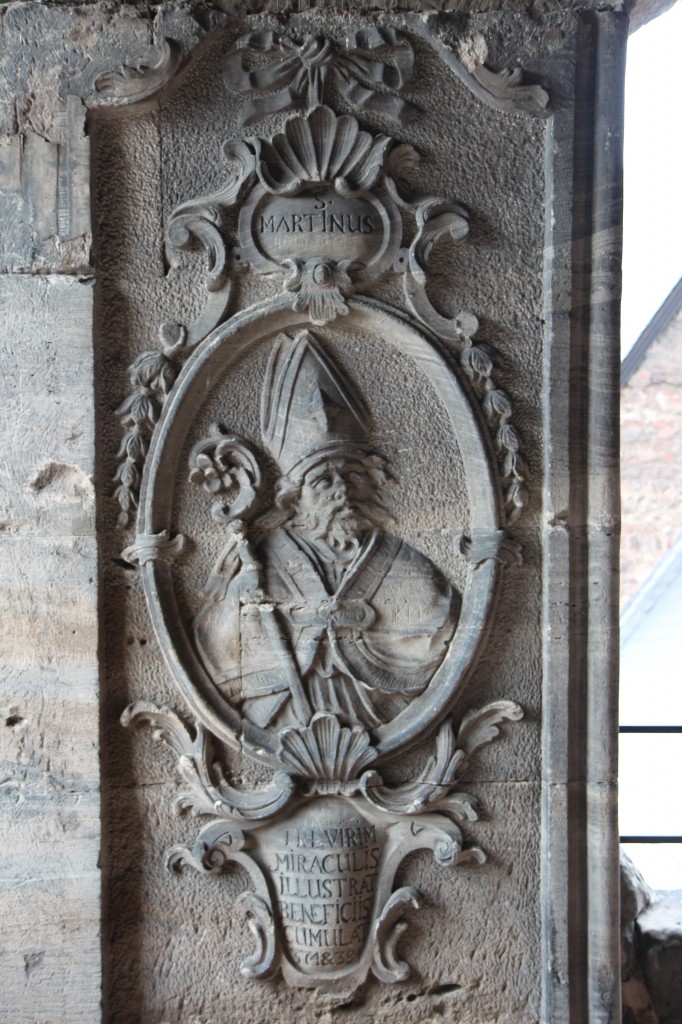 About 1802, Napoleon ordered the monastery, the church dissolved and the gate returned to its Roman-era appearance.  What we see today, dates back to the end of this ‘renovation’ in the early 1800s. 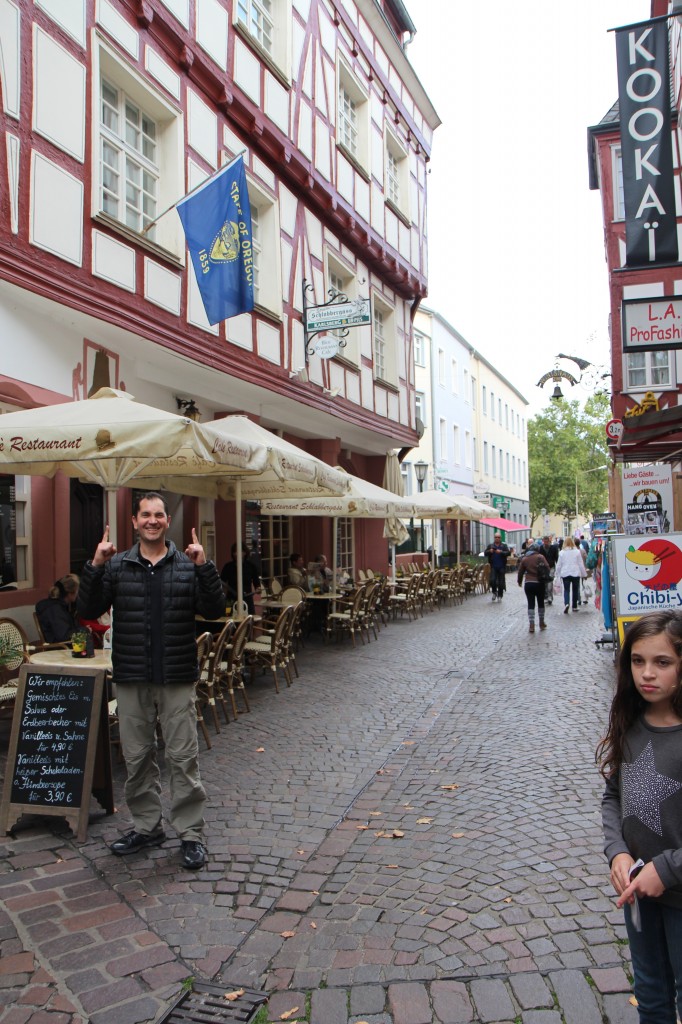 [I find a State of Oregon flag hanging up on a side street and have to get a picture with it.  Camille is looking suitable impressed. ]

Those Romans lived in style, there were three separate Roman baths here.  They intended to make this the largest network of Roman baths anywhere in the world.  The huge project was never finished, and when Constantine pulled out of Trier in 316 AD the Romans left behind over a mile of unfinished bath tunnels.

The Roman amphitheater is built into the city wall.  The hillsides around the amphitheater would have been lined with stone seats but all the stones were hauled off through the centuries.  They still put on gladiator exhibitions here.  Which almost requires me to include the classic line from the movie Airplane—“Do you like movies about gladiators?” 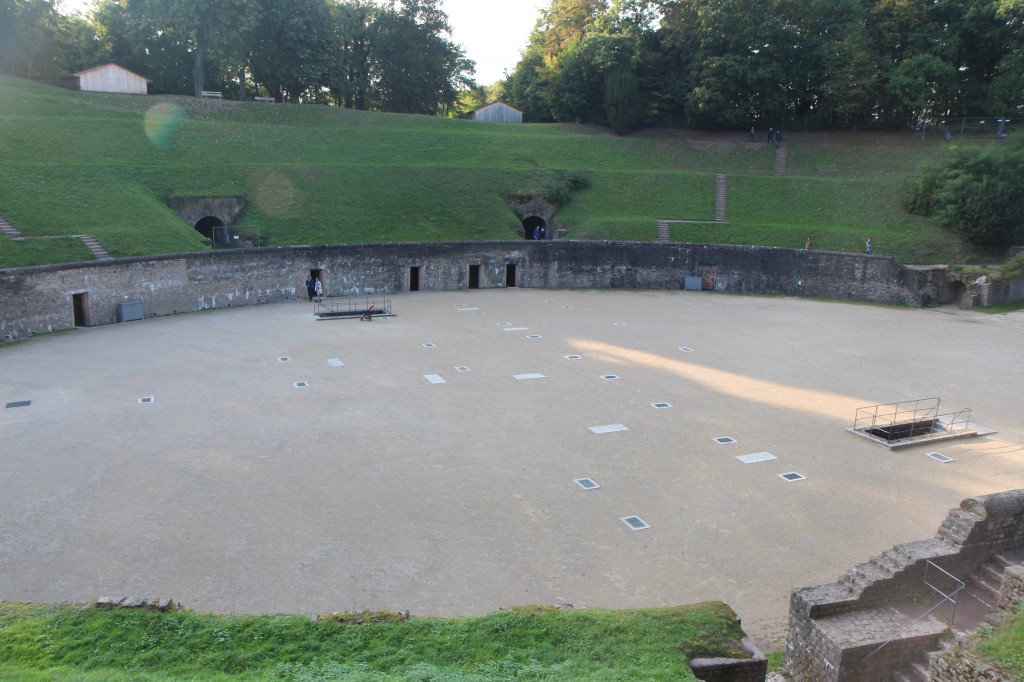 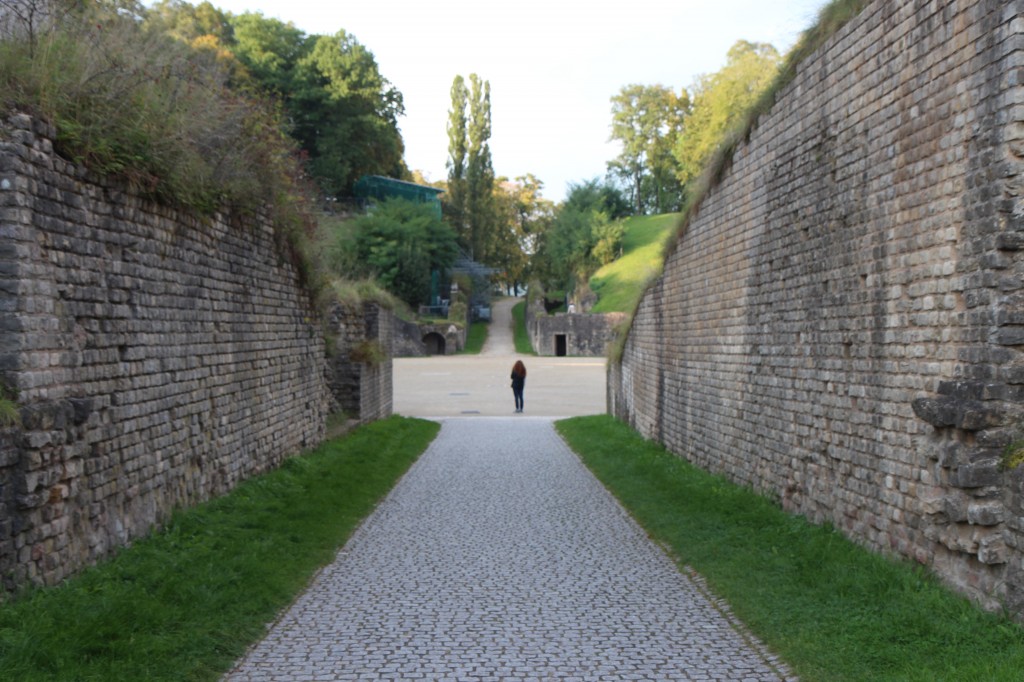 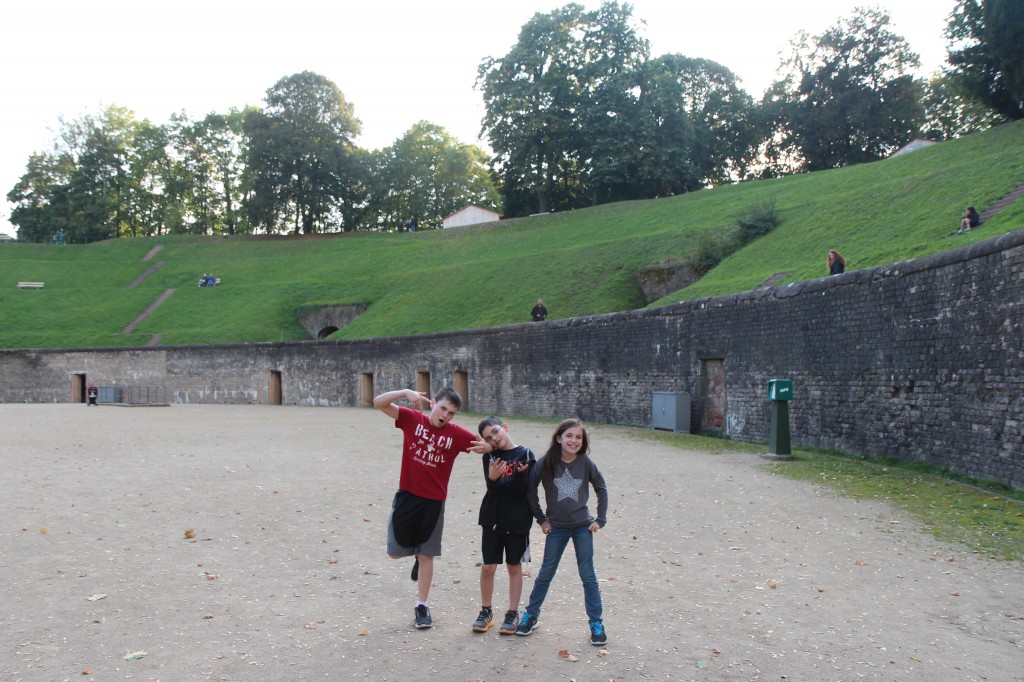 The amphitheater would have seated 20,000 spectators when it was built the 2d century.  There are ground-level rooms where the gladiators prepared for battle.

We crack up reading about the “vomitorium.”  The vomitorium is a passageway built under or behind a tier of seats to allow crowds to exit rapidly after a performance.  The Latin word vomitorium derive from a verb meaning to “spew forth.”  The kids love learning about something gross sounding but it’s also amazing to see how we still design many stadiums and theaters in this fashion.

Beneath the amphitheater “floor” there is an underground cellar where animals, feed and props were stored.  The Romans had trapdoors and false floors so that things could pop up from below.  They would stage mock naval battles.  Particularly impressive, we see the deep circular shafts that are now full of water below the floor.  Each one had a large counterweight in it.  When they needed to quickly raise a large or tall artifice they’d drop the counterweight down the well shaft.  Amazing.  The Romans would keep prisoners sentenced to death alongside exotic wild animals like African lions or Asian tigers.  A moveable platform would bring them up to the amphitheater for the showdown. 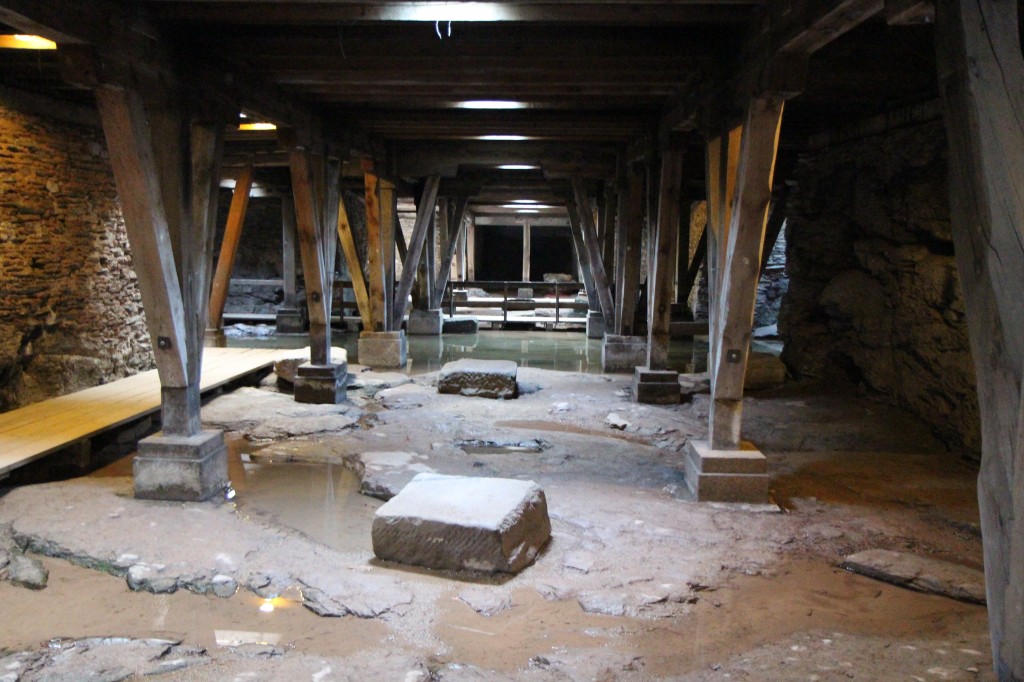 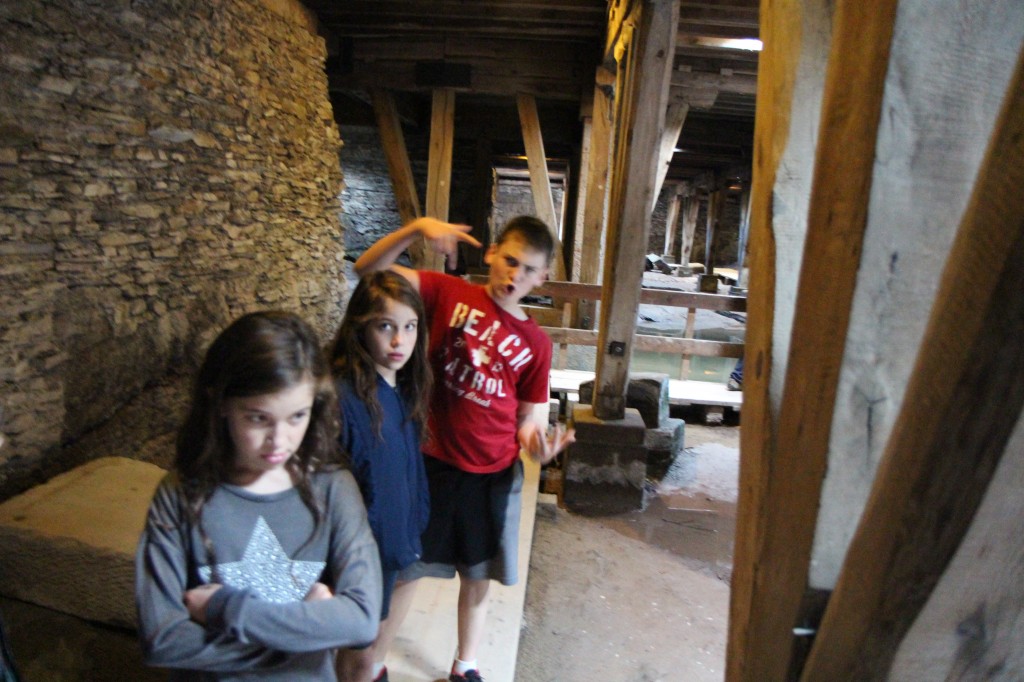 We run by the oldest cathedral in Germany as we are out of time.  I love to see the old churches and castles but we are certainly learning that too many and you just burn out the small people.  Better to just see a few things at a time.  They are doing so well on this big trip. 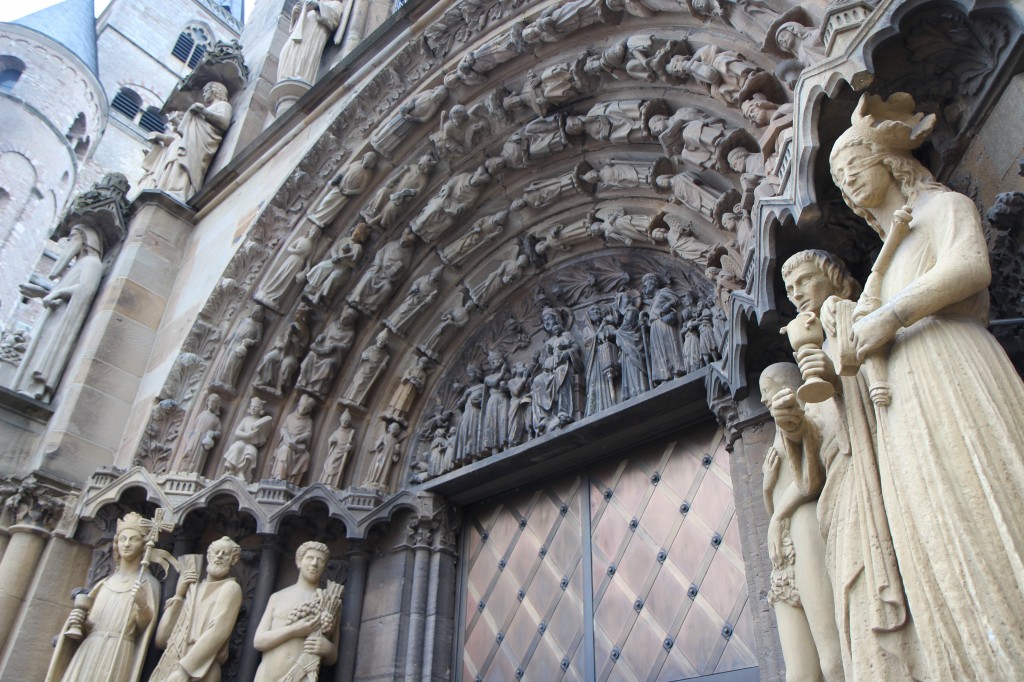 We find a great playground near the back of the palace of Trier and the kids are off to the races.  Young mothers sit near us with their strollers and try to keep on a sharp eye on their own little wigglers.

Trier sightseeing time is over and we pile into the welcome car seats to drive to the picturesque Mosel river valley.  We’ve booked a place in a small town called Oberfell.

We pull up to Horst and Andrea’s house to get the key and they walk us down the house which is right behind their place.  She opens the door and asks, “where are the kids?”

We bring them to the door and the family is so friendly.  They have kids the same ages as ours but our kids are still a bit hesitant to try and bridge that language barrier.

The whole family walks us down to the house that used to be his parents’ place.  Horst & Andrea have left out for us a bottle of Mosel wine, sweets for the kids and even candy on each bed. We are in a tiny German town on the river with our car parked on a very quiet street.  Good thing we left Spangdahlem! 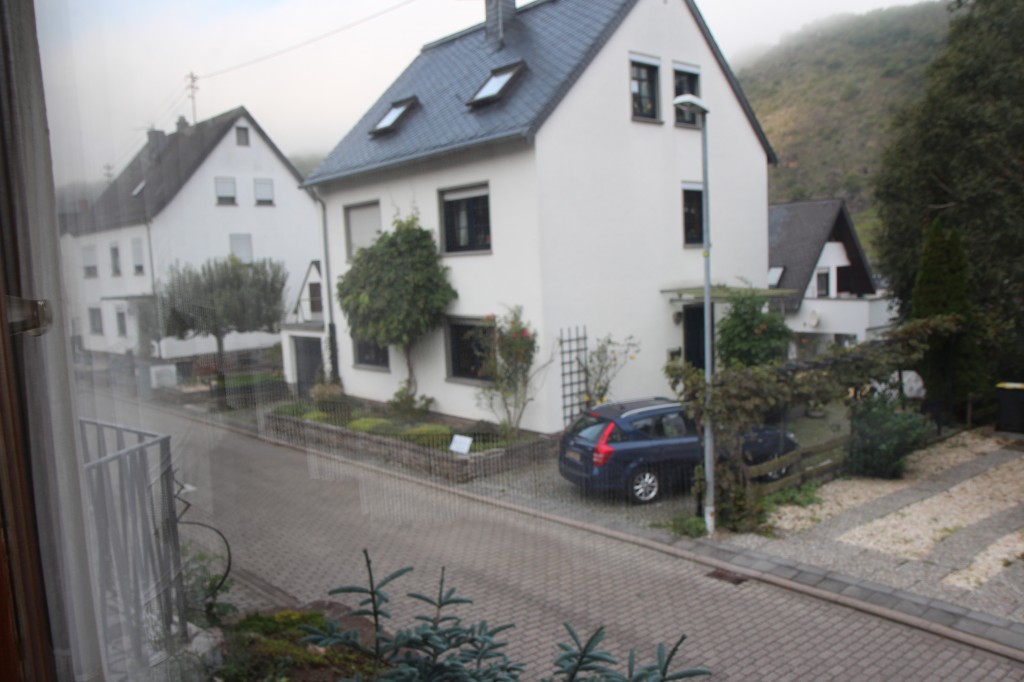 [the view out our front window]